The goals for this bake are to tweak the previous bake, #30, by increasing the percent of whole wheat, pre-soak the add-ins, and weigh some things so others can better replicate it if they want.  The poppy seeds and maybe the corn meal in the previous bake were not quite soft enough for my liking.

First mix. All mixing and folding-in was done with a silicone spatula/scraper.

The above was left to soak about 10 to 15 minutes.

The following was added in 3 stages, 3 sets of (water, folded in, then flour, folded in):

Then, because I had forgotten:

4:45 pm - The dough seemed ready, so... folded, shaped, put it in a lined banneton dusted with 50/50 mix of rice flour and bread flour.  I used the 8" (I.D., 8.5" O.D.) banneton, but after I put it in, I started thinking I should have used the next bigger one. Put plastic wrap from the bulk ferment over the banneton, plus a rubber band.  Put it in oven at same warm temp. (Not sure what temp, but  I keep it consistently over the "E" on the oven thermometer.)

This size banneton means that the loaf will be baked on the lid portion (also 9" I.D.) of the Lodge combo cooker, with the deep part as the cover.

Inverted the dough over parchment paper, brushed off excess dusting flour, and scored a #.  I flubbed the transfer of the parchment and dough to the hot dutch oven lid. You can see some unevenness.

* First number is thermostat setting, second number is a cheapy oven thermometer that I keep in it. They differ by 25 degrees F.

The white paper plate is 9" diameter. 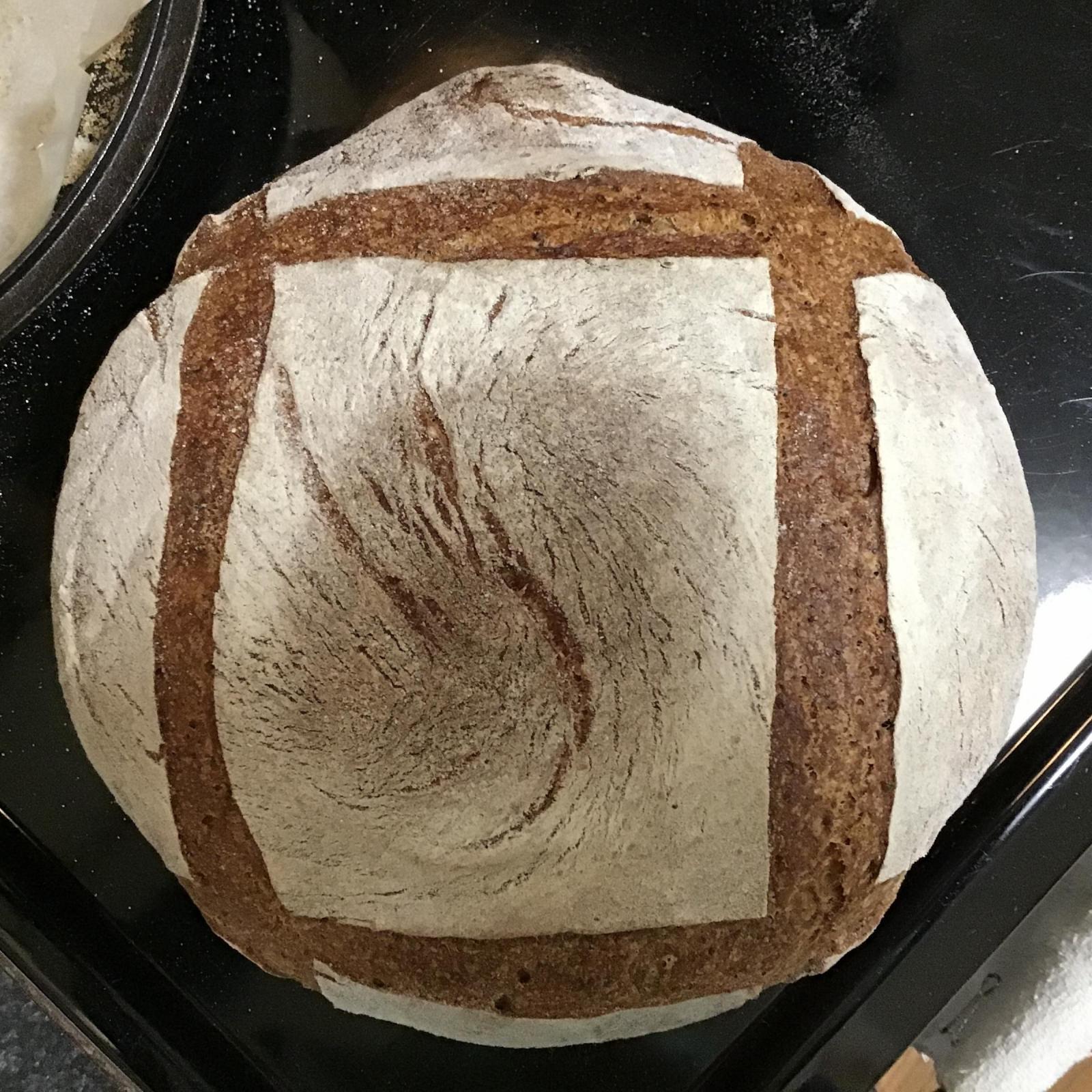 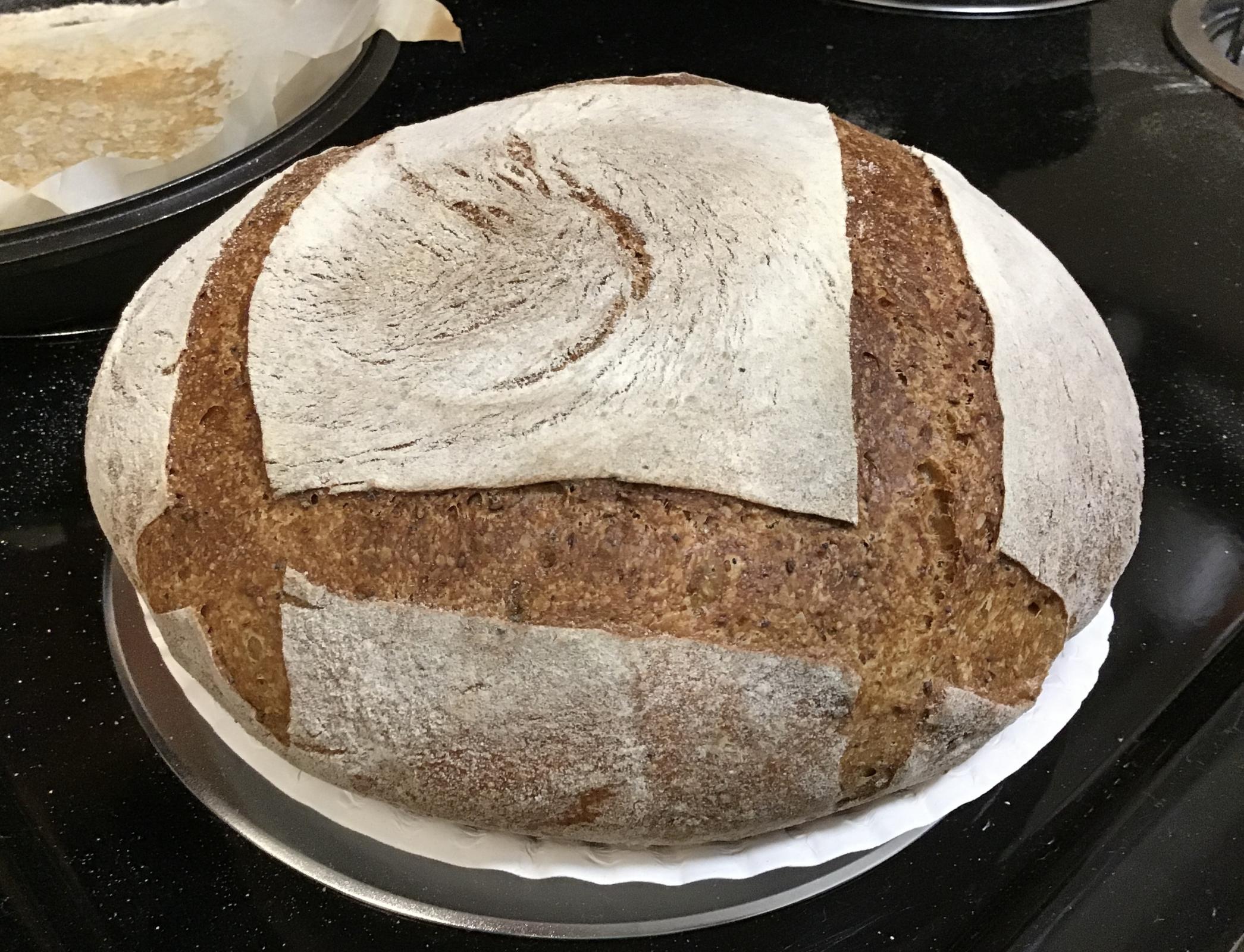 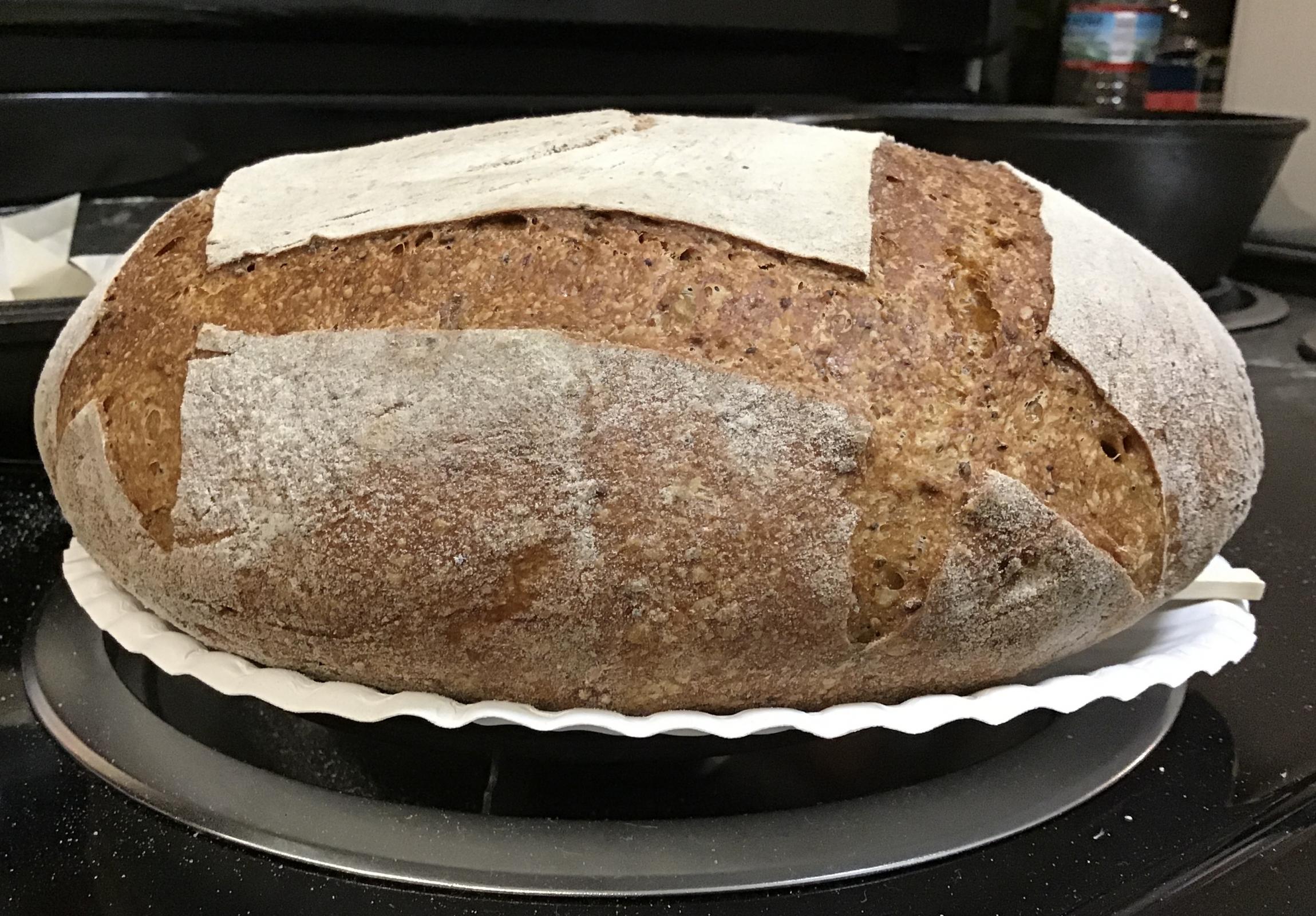 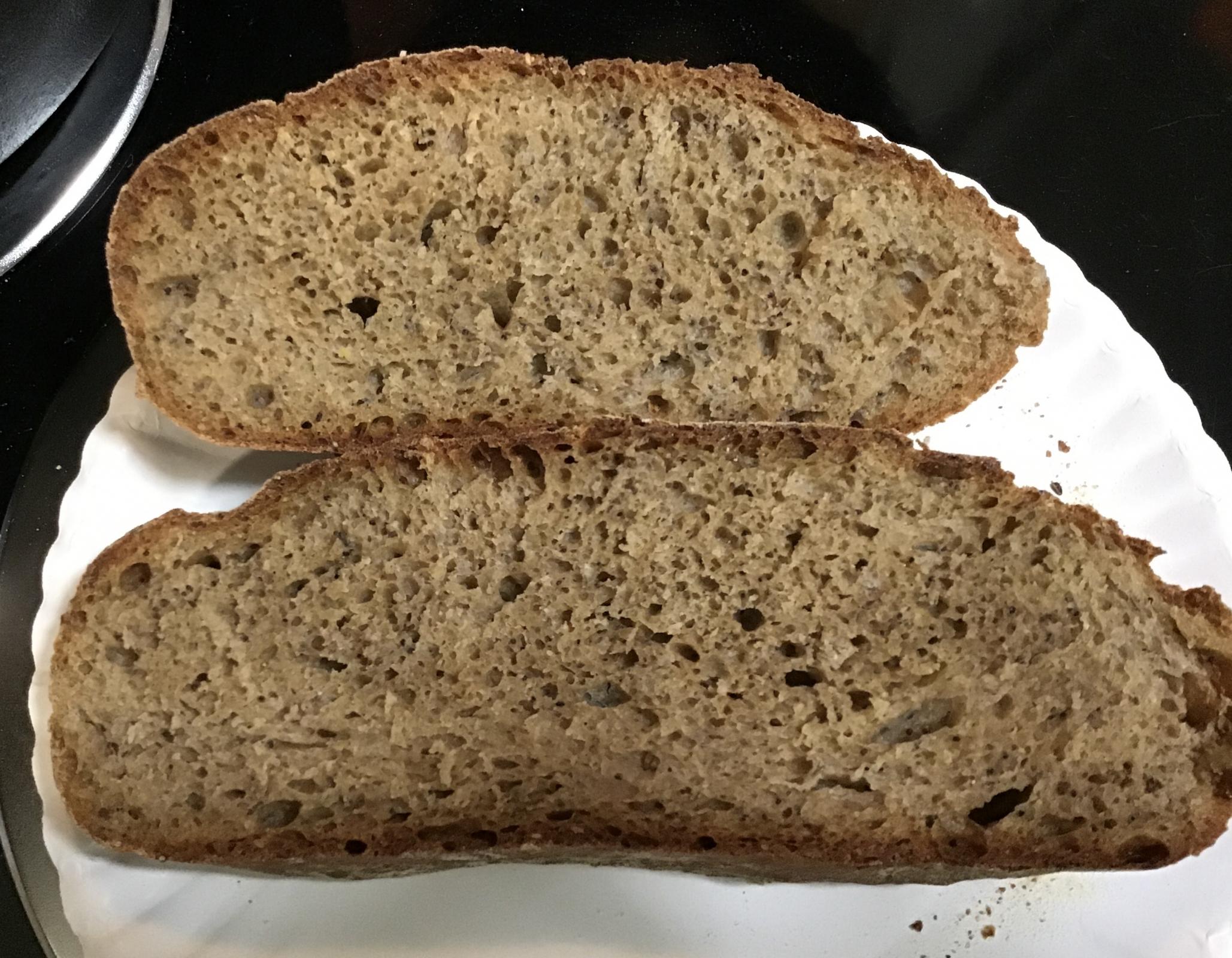 The crust looks thick, but it's soft and chewy, the way I like it.

This started out as a bake of Steve Gamelin's 50% WW loaf, as shown here: https://www.youtube.com/watch?v=vcmS7uahscI

His formula is volumetric:

I'm doing a little longer bulk ferment, so I used 1/8 tsp instant dry yeast. I also changed to 1-1/8 tsp salt, and used 14 fl oz water because of the add-ins.  The rest is SOTSOT.

Mixed at approximately 3:30 pm.  Will shape, proof and bake tomorrow AM.

I couldn't help myself, and did one set of four stretch-and-folds at 5:26 pm.  The dough seemed a little stiff, so I sprinkled on about 1/4 tsp of water.

Did another set of four stretch-and-folds at about 6:30p, and sprinkled on another 1/4 tsp of water.

Did another set of four stretch-and-folds at about 7:30p, and sprinkled on another 1/4 tsp of water.

I was up around 4:15 am, so I decided to check on the dough which had been fermenting at about 68 F room temp. It had at least doubled, and was bubbly on top.

So I folded, shaped, stitched the seam, and put it in a 8" inner-upper-diameter banneton, seam up, with a cloth liner that was dusted with 50/50 rice flour and KA bread flour. I put plastic wrap on top, held in place with a rubber band, put in a plastic grocery bag, and put in fridge, which is about 38.8 to 39.4 F.

Final proof was 4.5 hours at 39 F.  The dough had risen noticeably in the fridge and was pressed up against the plastic wrap.

Pre-heated oven to 465 F.  Turned dough over on parchment and scored. It had a nice skin and it did not spread out much. But due to the uneven scores it spread in one direction more.  Loaded it into the deep part of a Lodge 3.2 qt combo cooker.

I forgot to weigh the final dough. But after cooling few hours, the baked loaf weighed 920 grams. 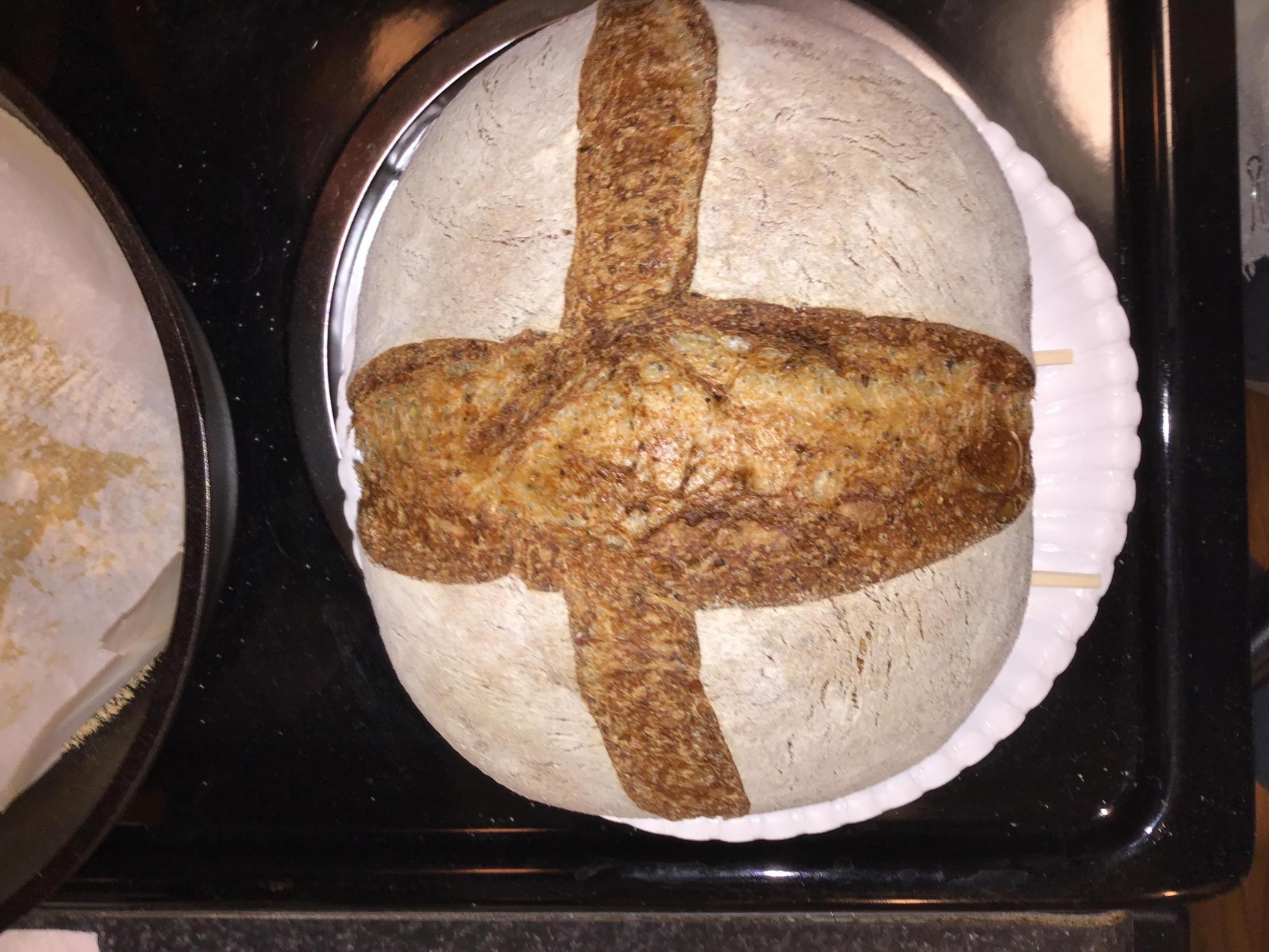 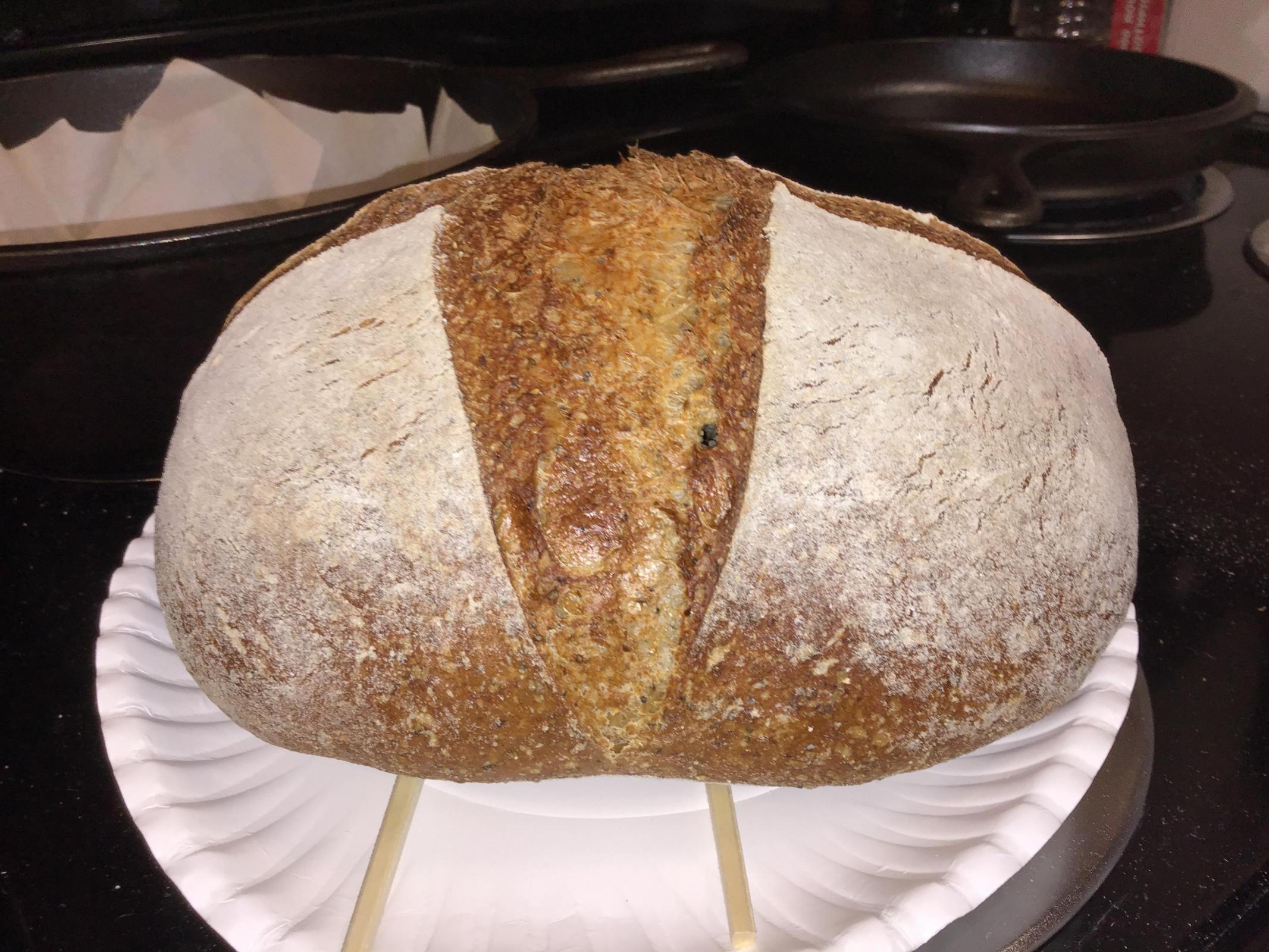 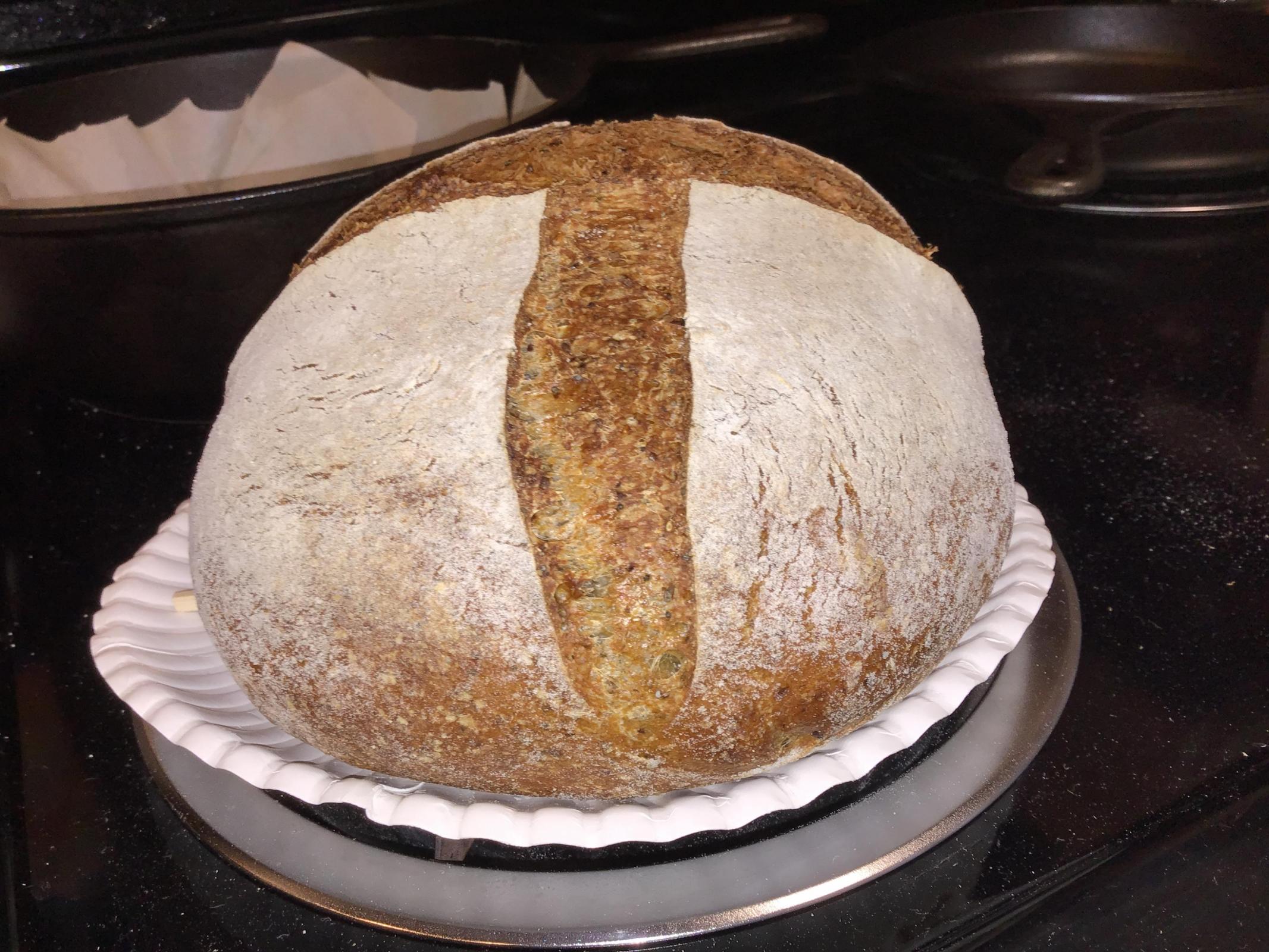 A few days ago I did this by just throwing the ingredients together without measuring anything. I made a pita (flatbread) with it, and baked it in my toaster oven on a Lodge cast iron 9.25" serving griddle.

It came out surprisingly good.  So I decided to try again, measuring the ingredients this time so I can repeat it and share with others.

Make sure the guar gum and psyllium are well distributed/mixed with the flour prior to adding water, otherwise they will clump.

I forgot that I had used some fat-free milk powder and a dash of nutritional yeast in my previous attempt, and did not use them this time.

Shaped into 8.5" diameter round flatbread, started final proof, around 1:00pm.  The dough had softened and loosened up noticeably, and was easy to shape.

Pre-heated toaster oven, with both upper and lower elements turned on, to 400 F indicated. I'm not sure what actual is. Held temp at 400 for 10 minutes to get cast iron griddle/plate up to temp.

At 2:00pm, after a 1 hour final proof, I docked the flat dough with a fork, so it wouldn't puff up, and loaded in the toaster oven,  with the side with holes facing up. Lowered thermostat to 350 F, and turned off upper element, leaving lower element enabled.

Baked 5 minutes, flipped the bread over, and baked 4 minutes more.

The first down side (the side without holes) resulted more crispy than I wanted, but the other side was perfect.  I will likely pre-heat to only 350 next time, and bake 4.5 minutes each side.

There is a mild off taste that I think is the psyllium. So I will eliminate it next time.

Based on previous experiments, I've concluded that "blended" (in a Vitamix blender, as opposed to being milled into flour) wheat berries need to be combined with milled flour to make a decent loaf.

At first I ran the berries through a flimsy "Ambiano" (Aldi) brand food processor, but that had little to no effect on the berries.  Maybe soaking them longer, or in warm water would have made a difference.

The wheat berries were then blended in a Vitamix with enough water to make a slurry, not a "paste" as previously done.

I forgot to weigh the water.

After pouring and scraping the slurry out of the blender into a bowl, I added 30.5 grams of dry quick/minute oat flakes (not Old Fashioned, not instant), 31.5 grams of whole dry chia seeds, and then let it sit a while to hydrate.

Then I added 6.0 grams of salt, 22 grams of Gold Medal bread flour, 1/16 tsp instant dry yeast, and about 12 grams of sourdough starter at 100% hydration. Starter was made from GM bread flour.

Bulk fermented at about 71 F for 2 hours, including some stretch-and-folds, then shape and put in a banneton.

The loaf feels heavy for the size, so it's likely to be gummy. 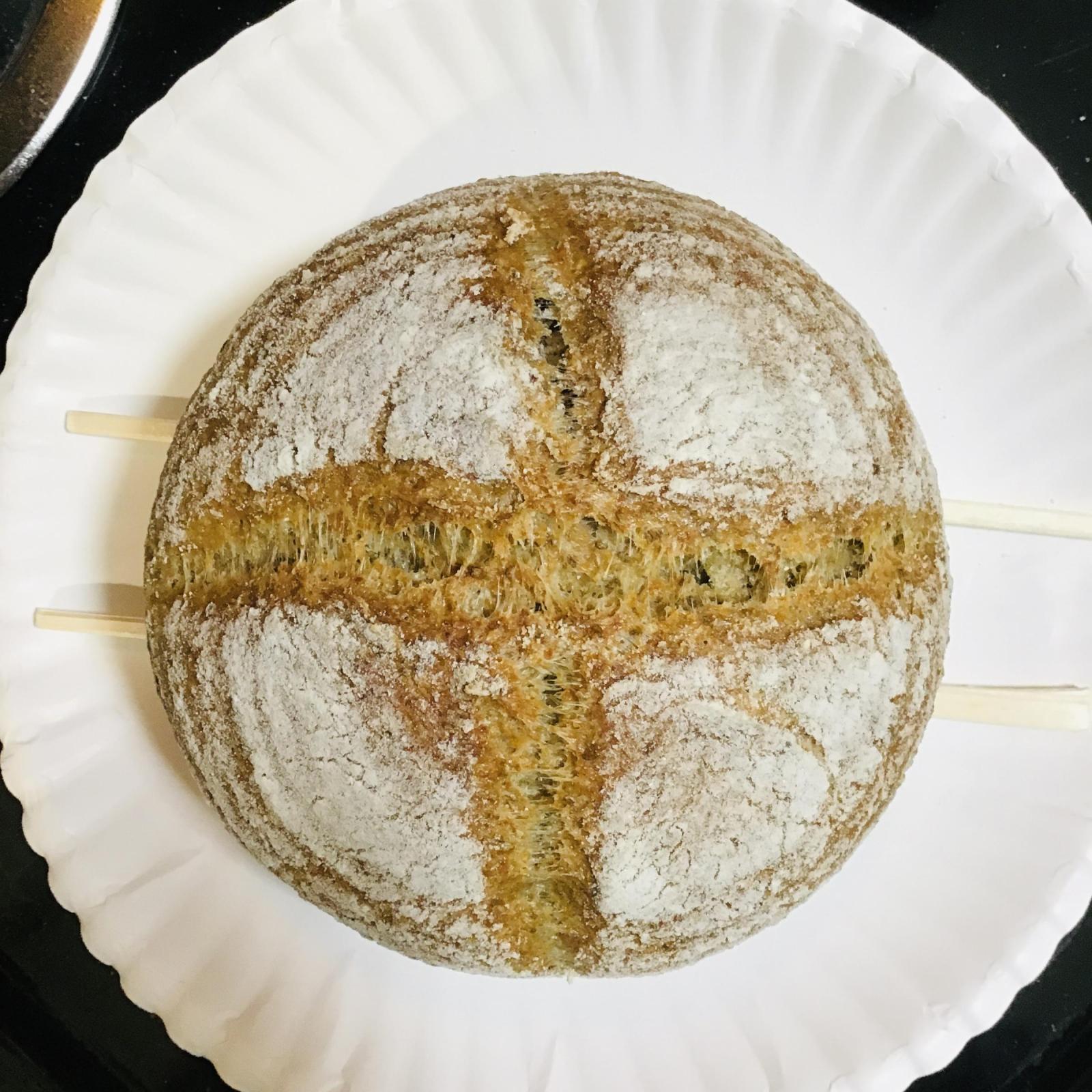 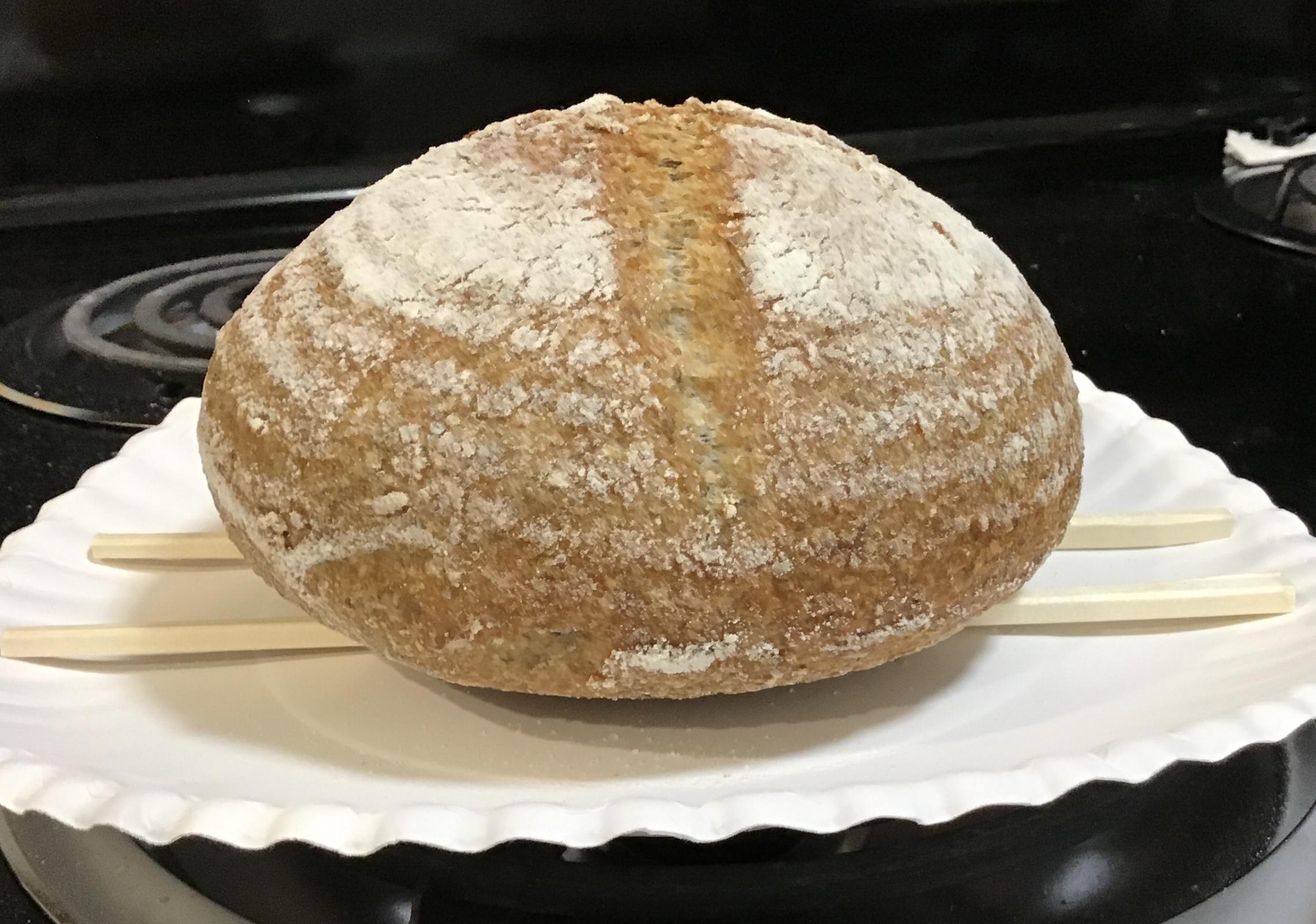 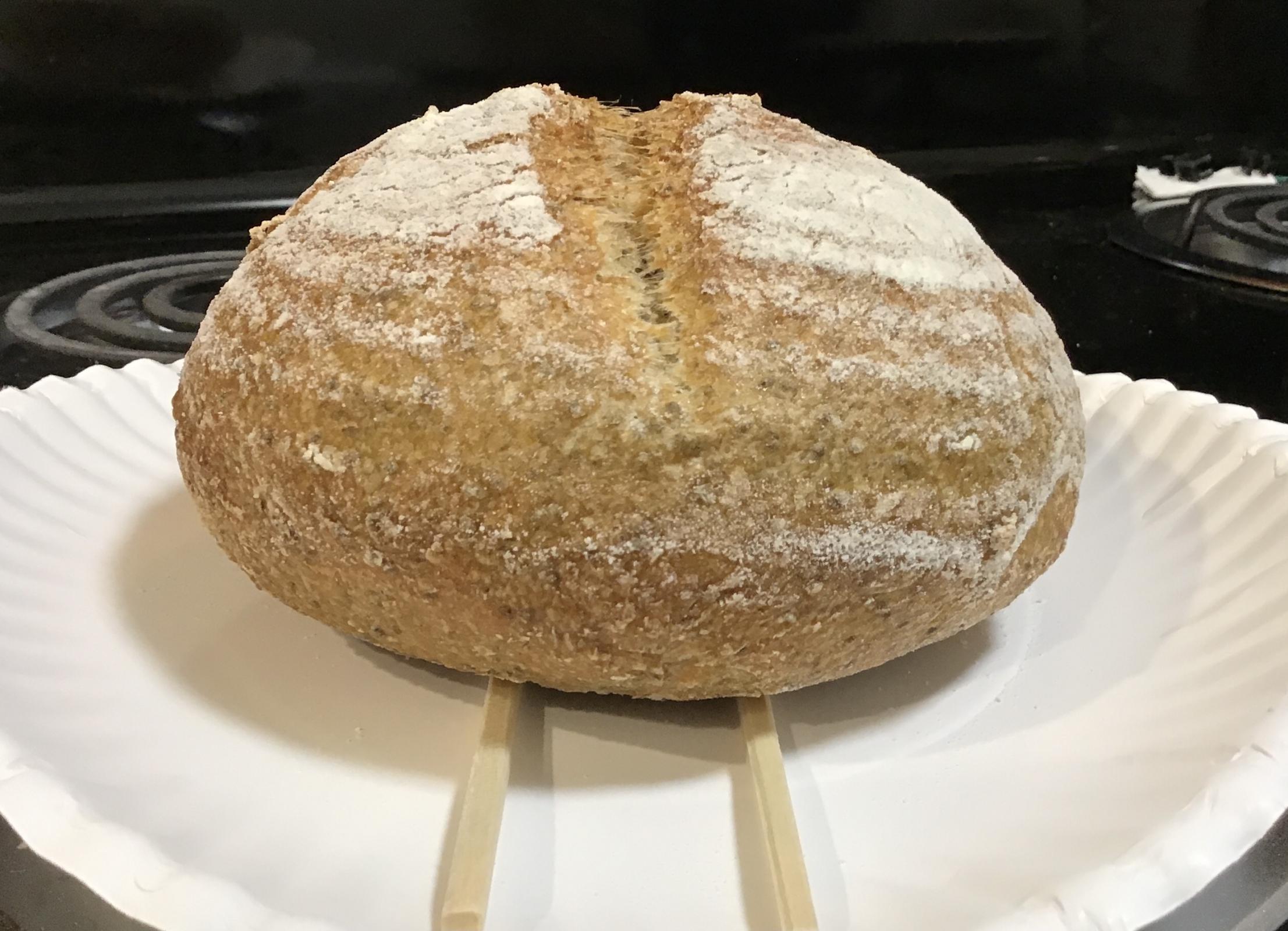 Yup, crumb is too moist and gummy. 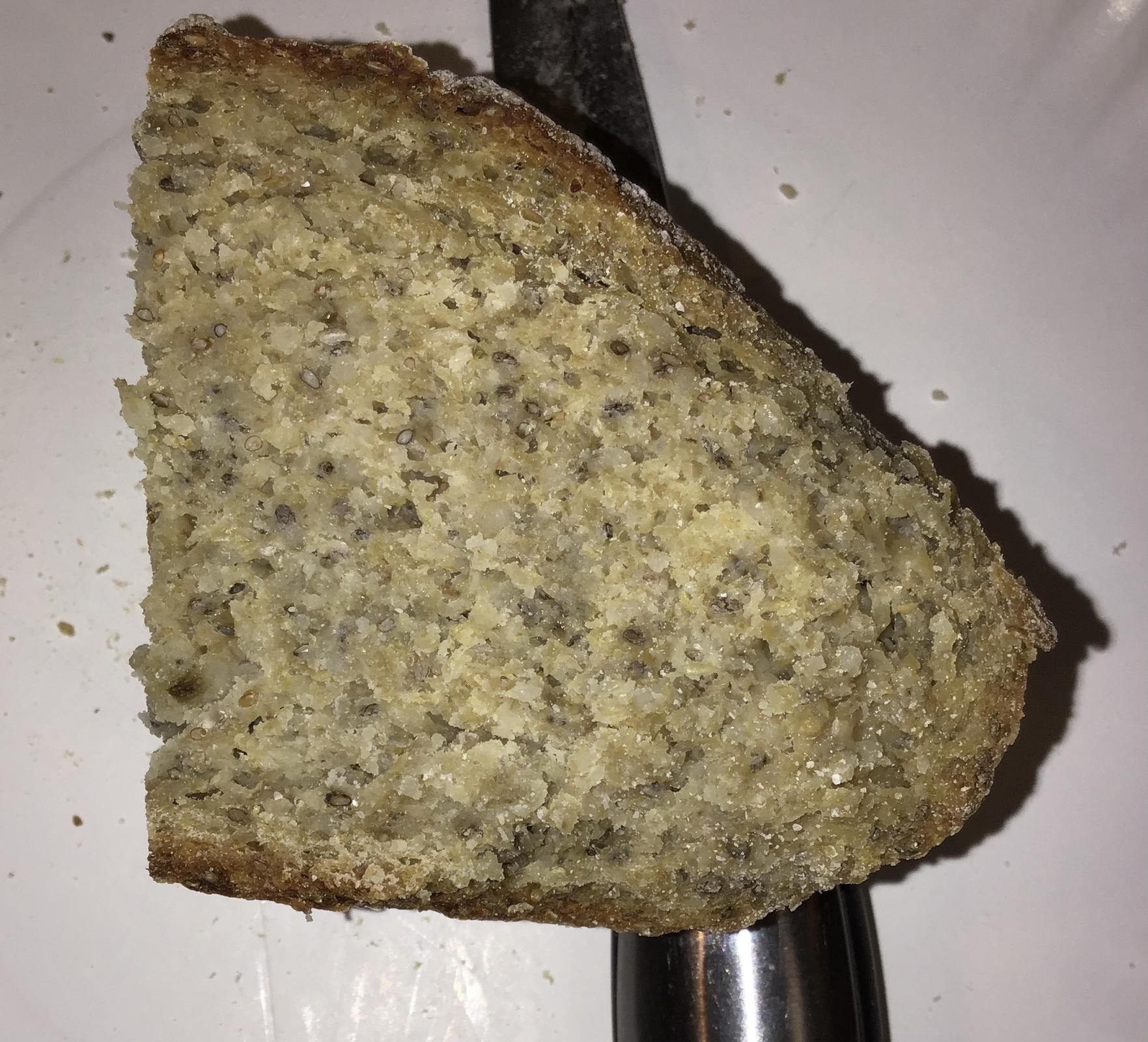 I got the psyllium husk powder at Patel Brothers (Indian) grocery store.

Both formulas said just "psyllium husk" and did not further specify "whole" versus "ground" (powder).  Whole husks can be had at Whole Foods.

Metamucil has other ingredients beside psyllium, so I would not recommend using it. 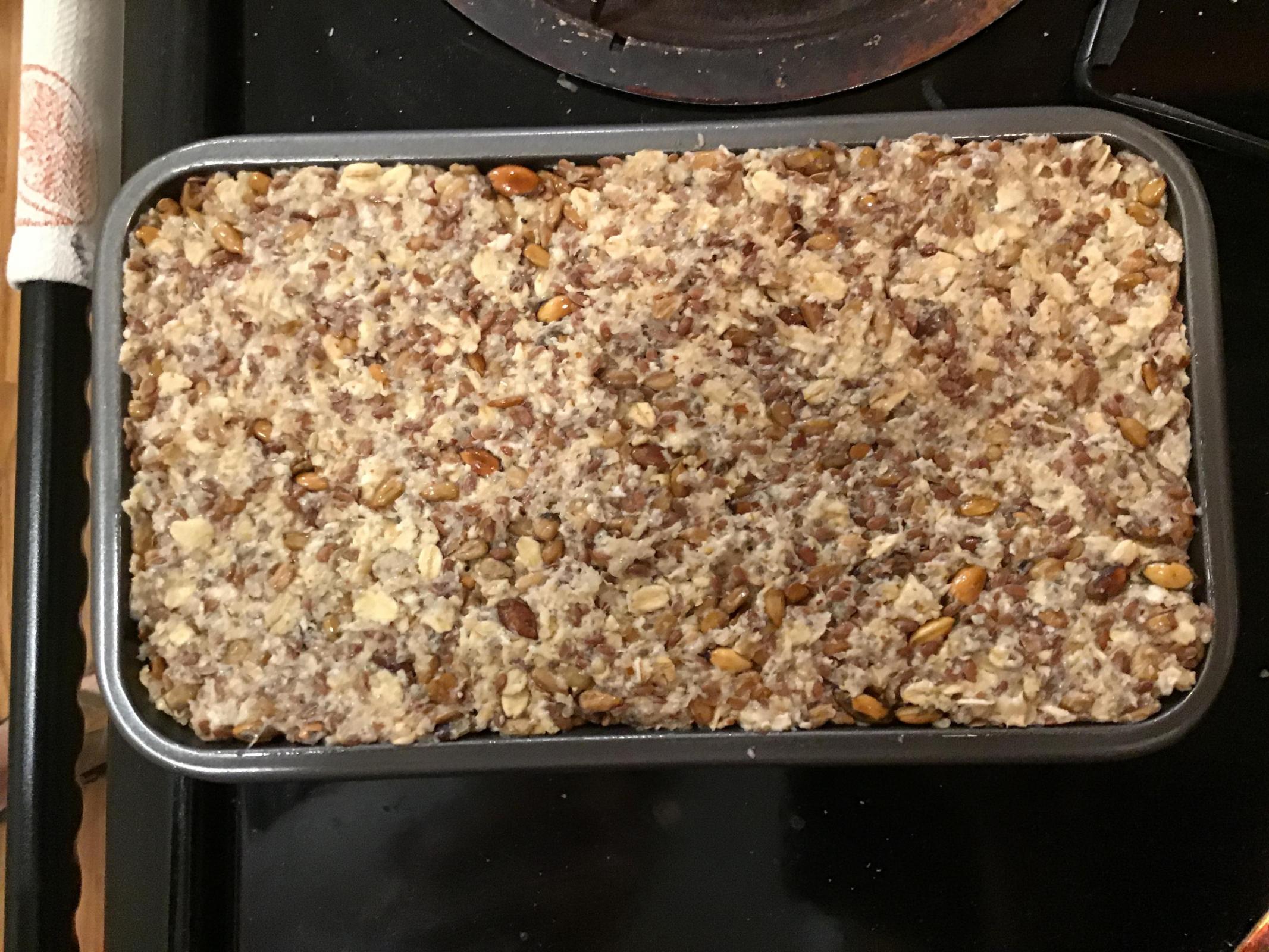 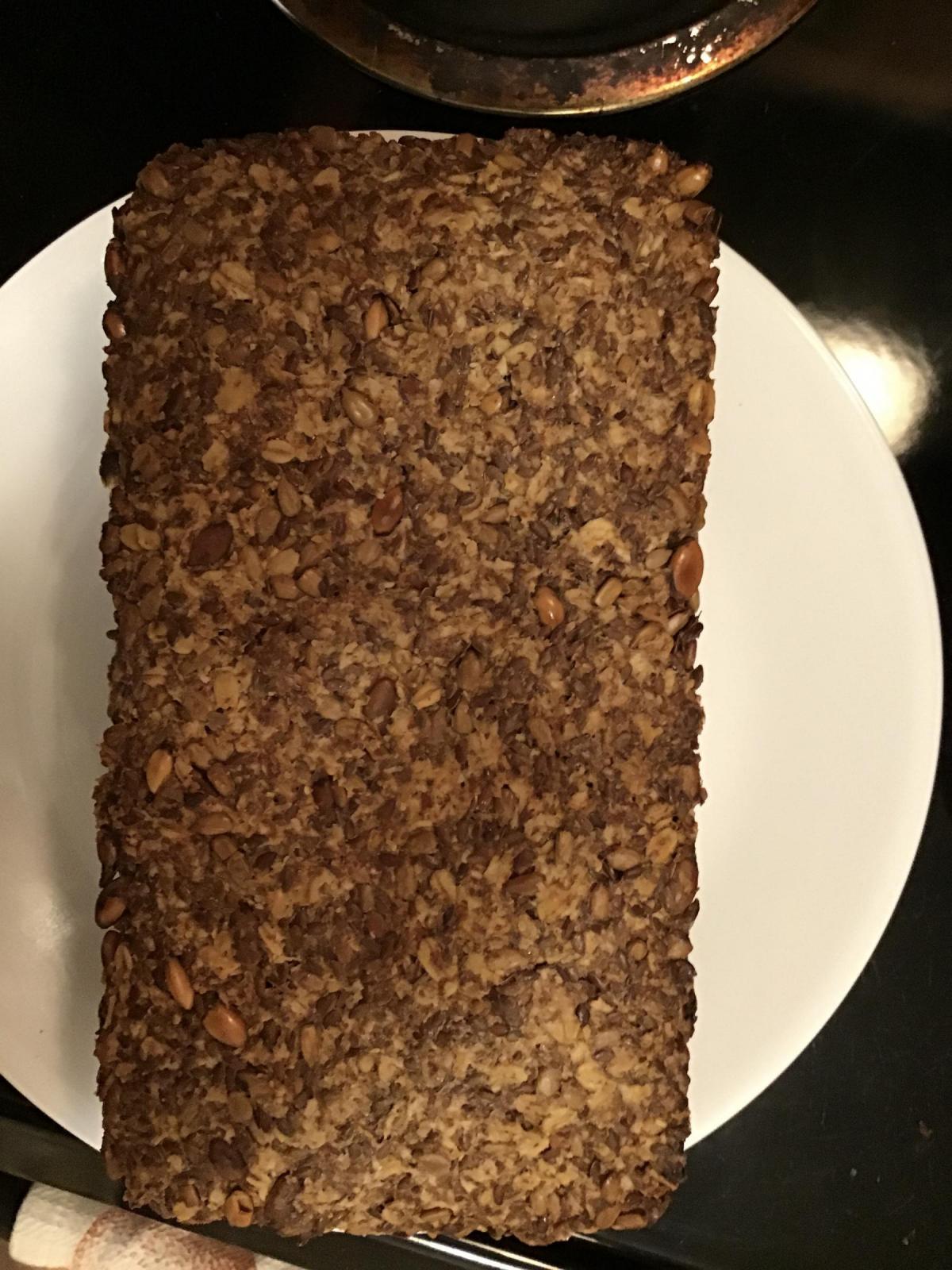 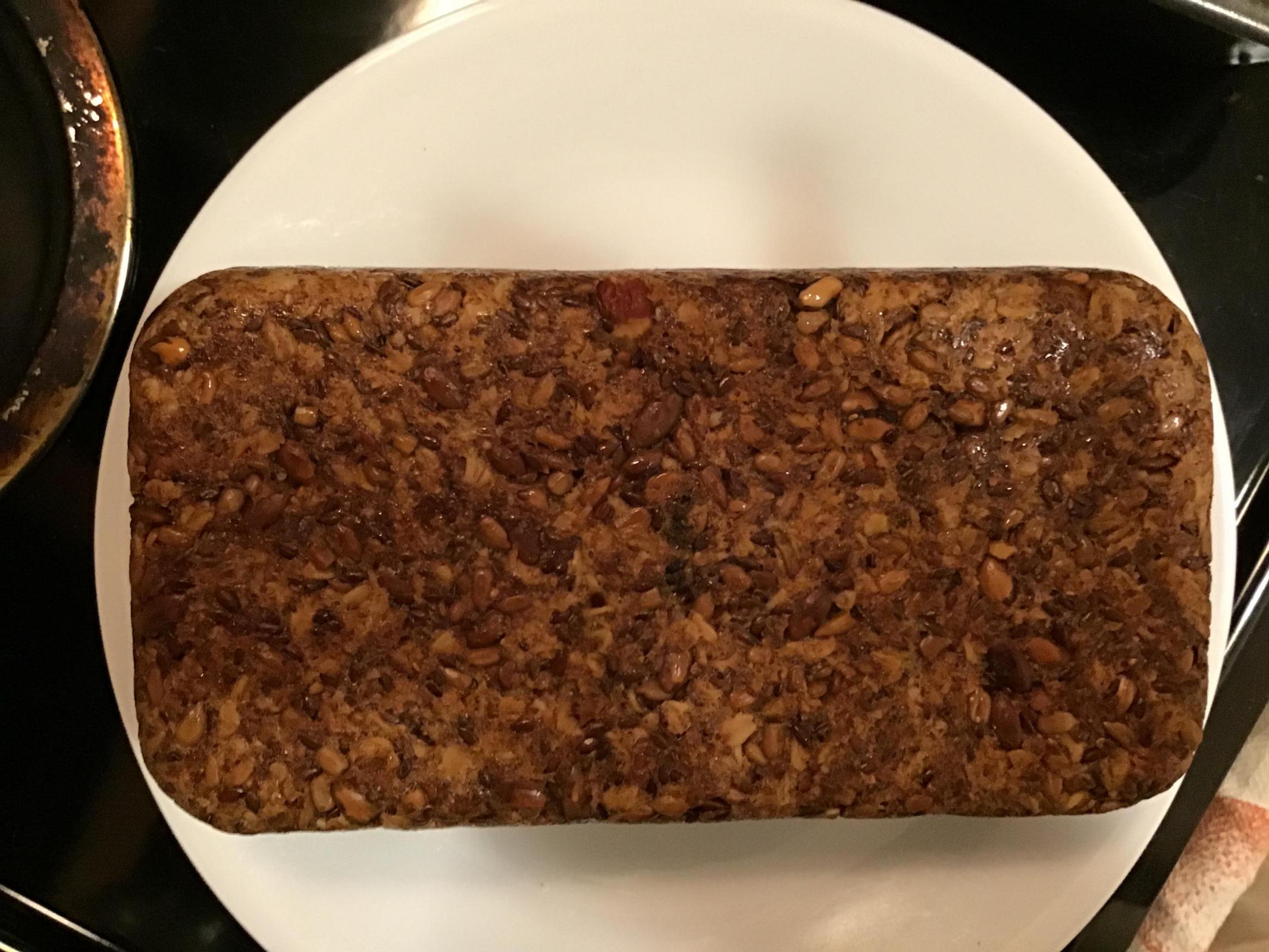 The goal of this bake is to use no pre-milled flour, just soaked whole berries that have been blended in a Vitamix blender.  Add-ins are then used to get the hydration right.

This time I weighed most things. I forgot to weigh the approximately 1 tbsp starter. Guessing it to be 19.5 grams.

I started with 225 g of whole berry hard white spring wheat, Prairie Gold, and soaked it in what looked like enough water for 17 hours. I exchanged the soak water during this period.

I weighed the berries and water at the end of the soak, and figured I put 284 grams of water and 225 grams of wheat in the blender.

Part way through blending, it looked like it needed more water to fully blend, so I added 22 grams of water for a total of 306.

It blended into a paste. I gave it an extra 30 seconds at high speed to break up the small bits. The paste got a bit warm.

Upon scraping it out of the blender, I could see strands, so it developed gluten.

The dough was a little rubbery and bouncy. Yup, there's gluten! Same behavior as yesterday's second bake, only a little more so -- so that one had gluten formed in the blender too, but I did not realize it.

After mixing in the add-ins, I realized that I didn't need to add any flour. Woo hoo!

At the 40 minute  mark, the rolled oats are still lumpy. So in the future, if I don't want oat lumps, I'll use just the quick oats, not the thicker un-cut old fashioned variety. 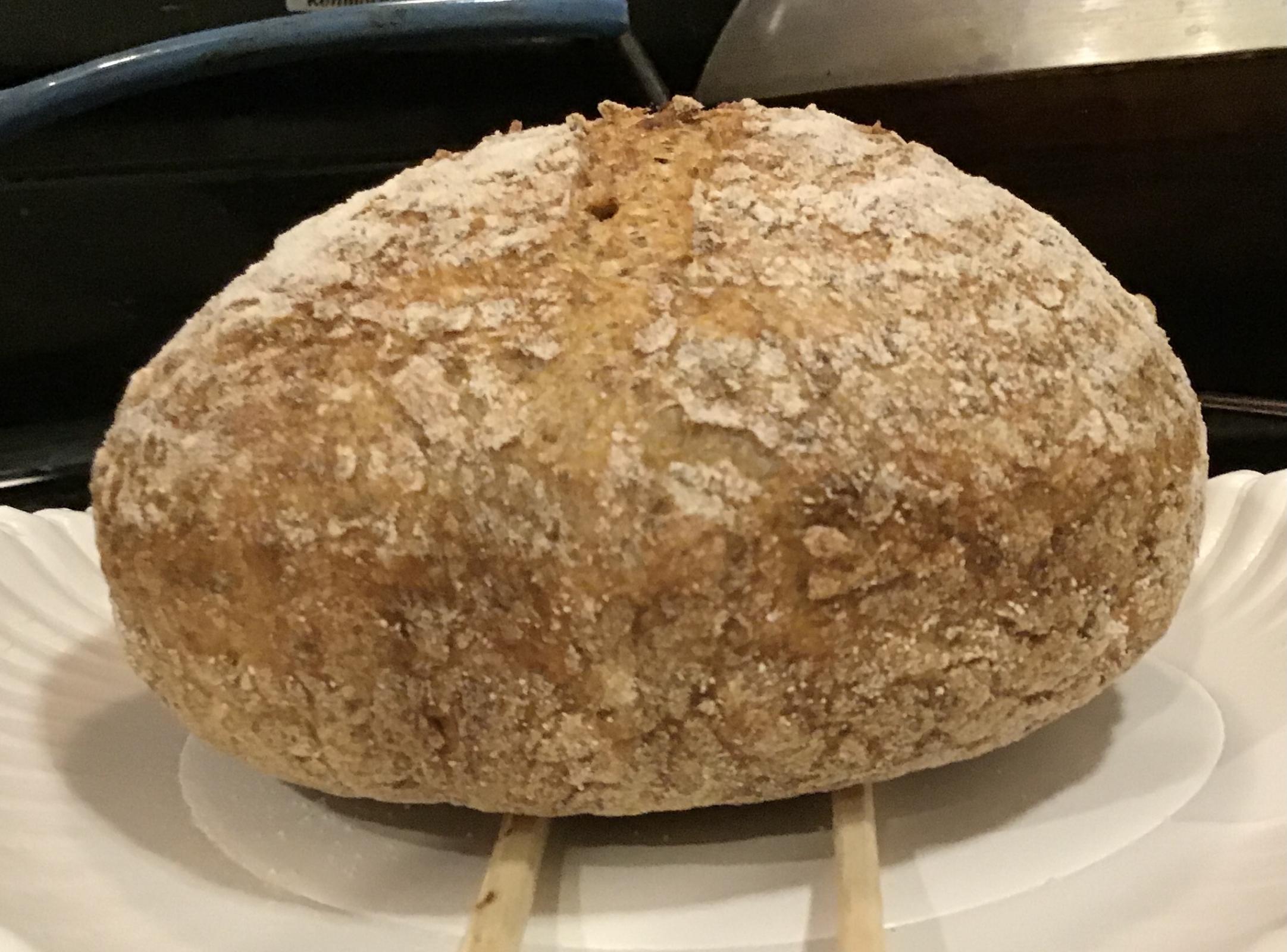 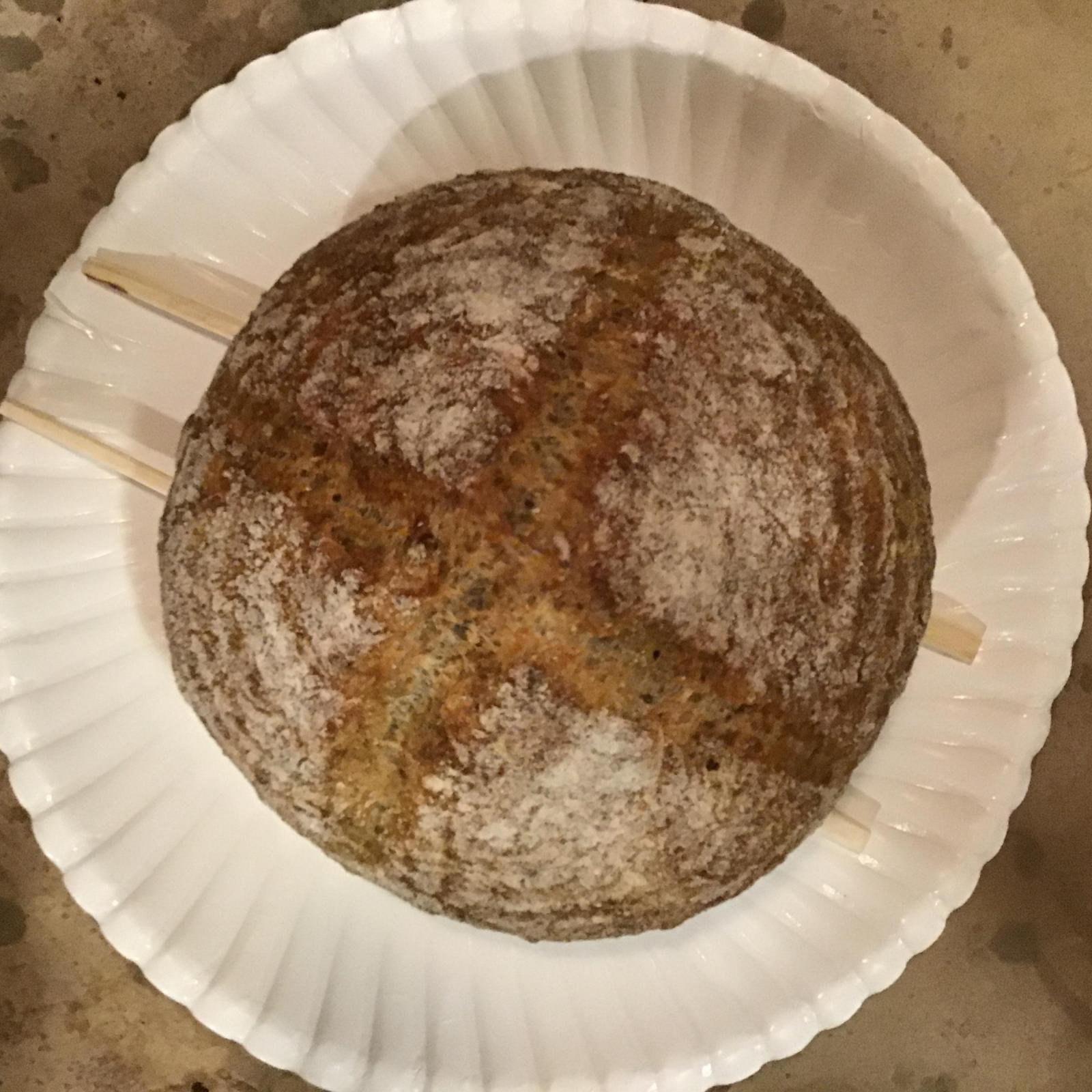 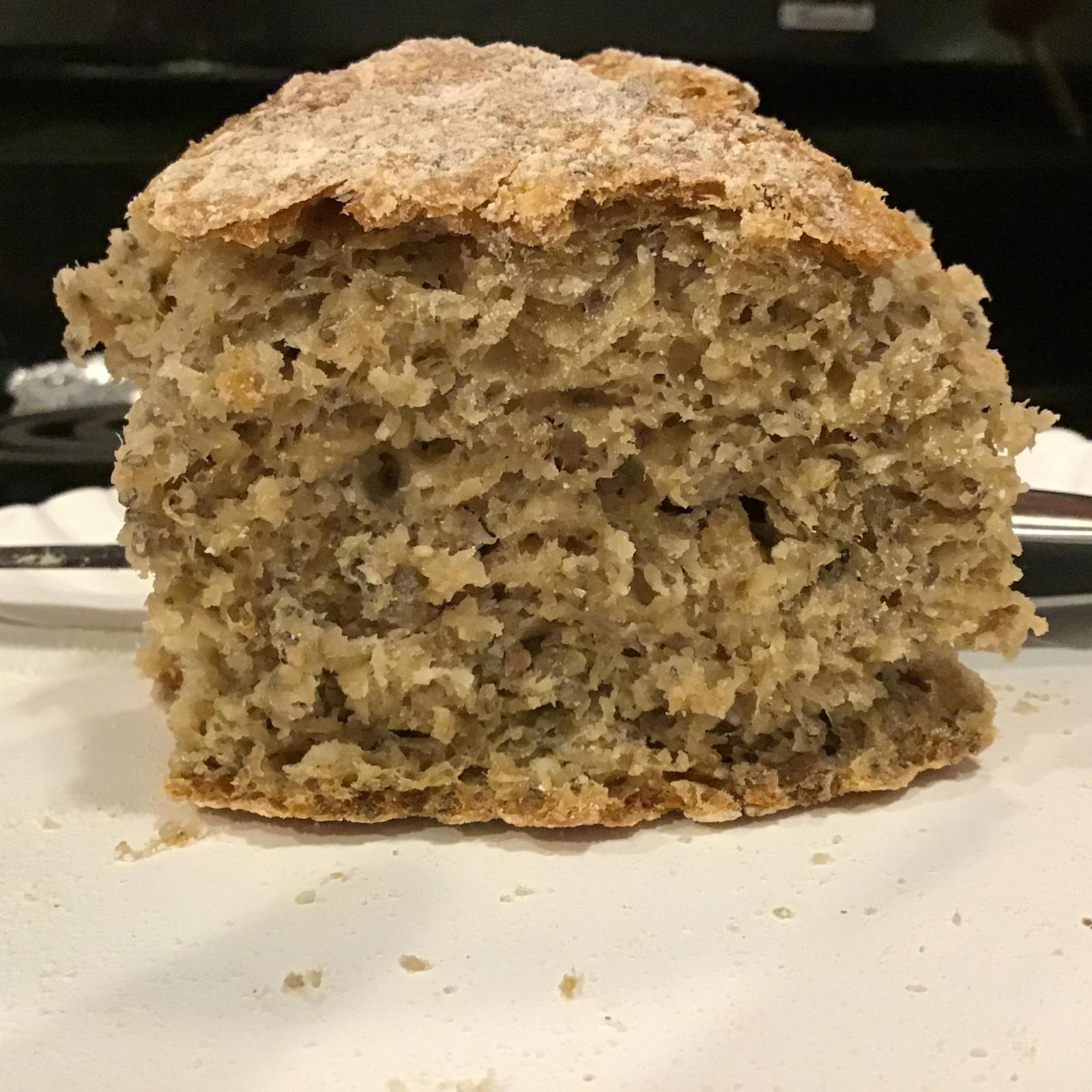 2nd bake of the day. Started the dough in the morning.  Again, not much measuring, just 3/4 tsp salt, 1/4 tsp instant dry yeast, which turned out to be too much.

Soaked some whole berry hard white winter spring wheat (Prairie Gold) for 18 hours. Around 9 am ran it through the blender with enough water to make a smooth paste. Emptied the paste into a mixing bowl. Had to use more water to get the remnants of the paste out of the blender container.

Finally added some Gold Medal bread flour, a dollop of sourdough starter, and 1/4 tsp of instant dry yeast, all mixed/dissolved in spring water. Used a silicone scraper to fold it into the dough.

It seemed the right hydration, so let it bulk rise, doing at least 2 stretch and folds.

Went and did some other things, and it rose too much.

Did a final fold, a shape, put in banneton, put in fridge, and immediately pre-heated oven.

Gonna wait until tomorrow AM to cut open. 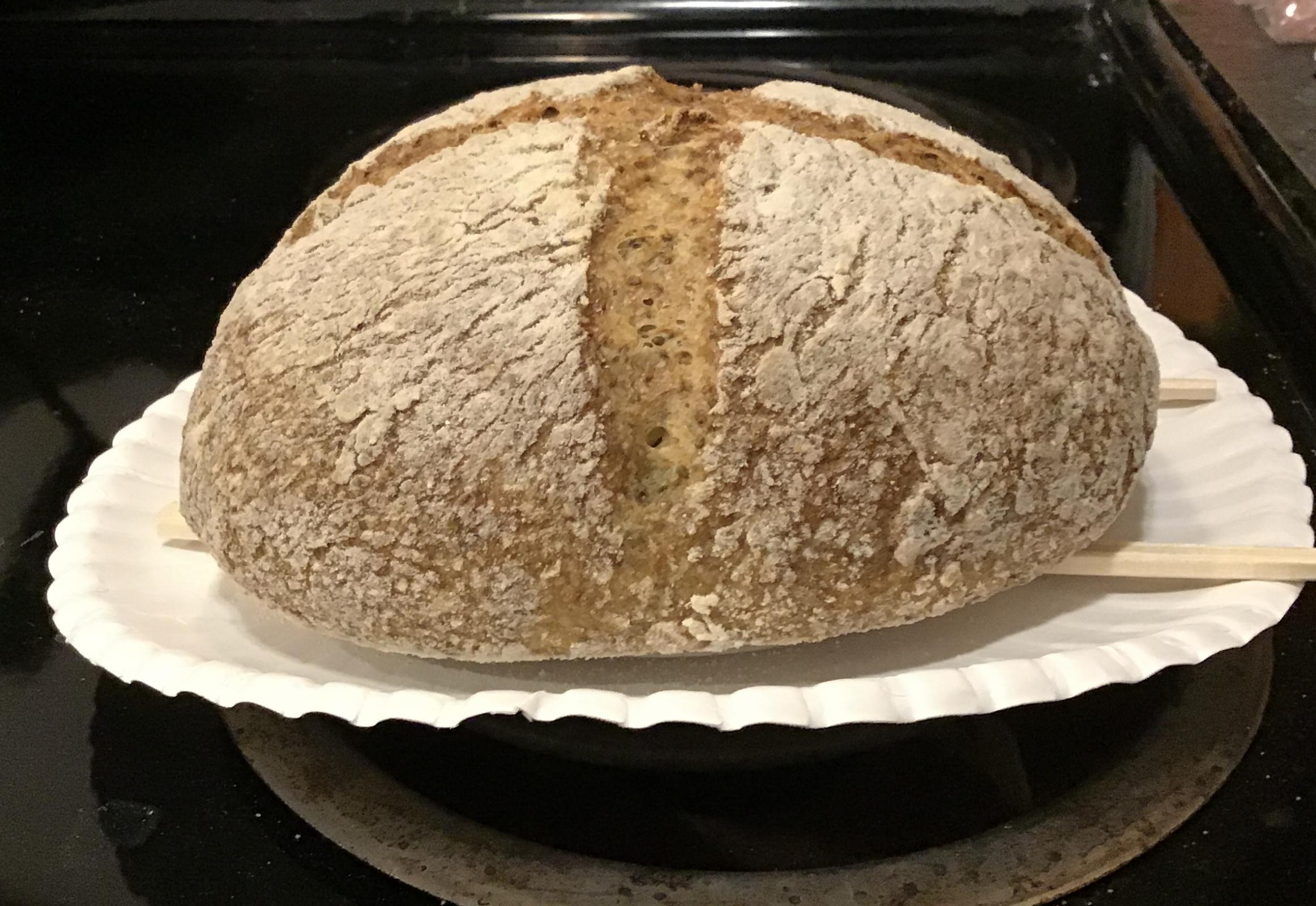 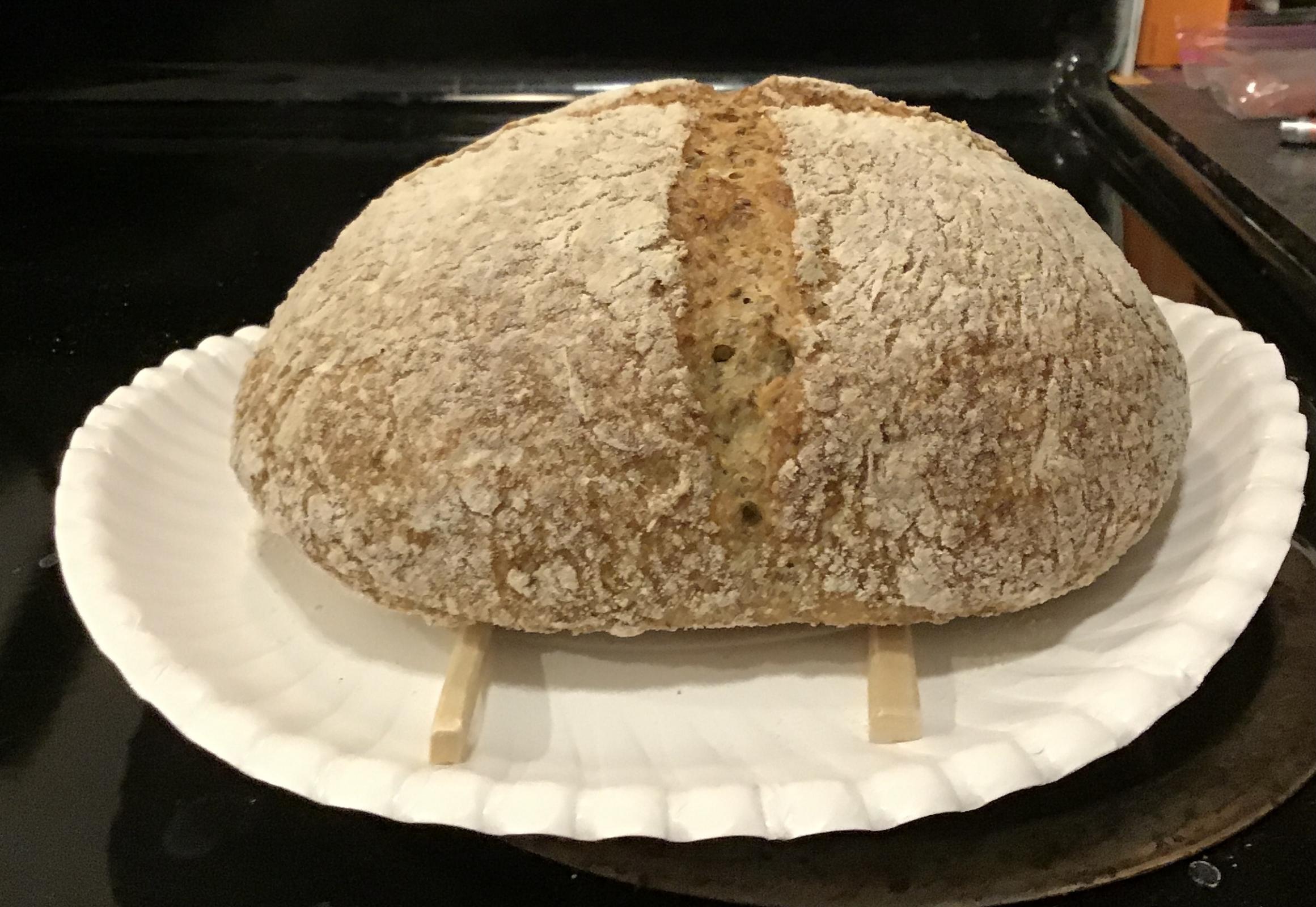 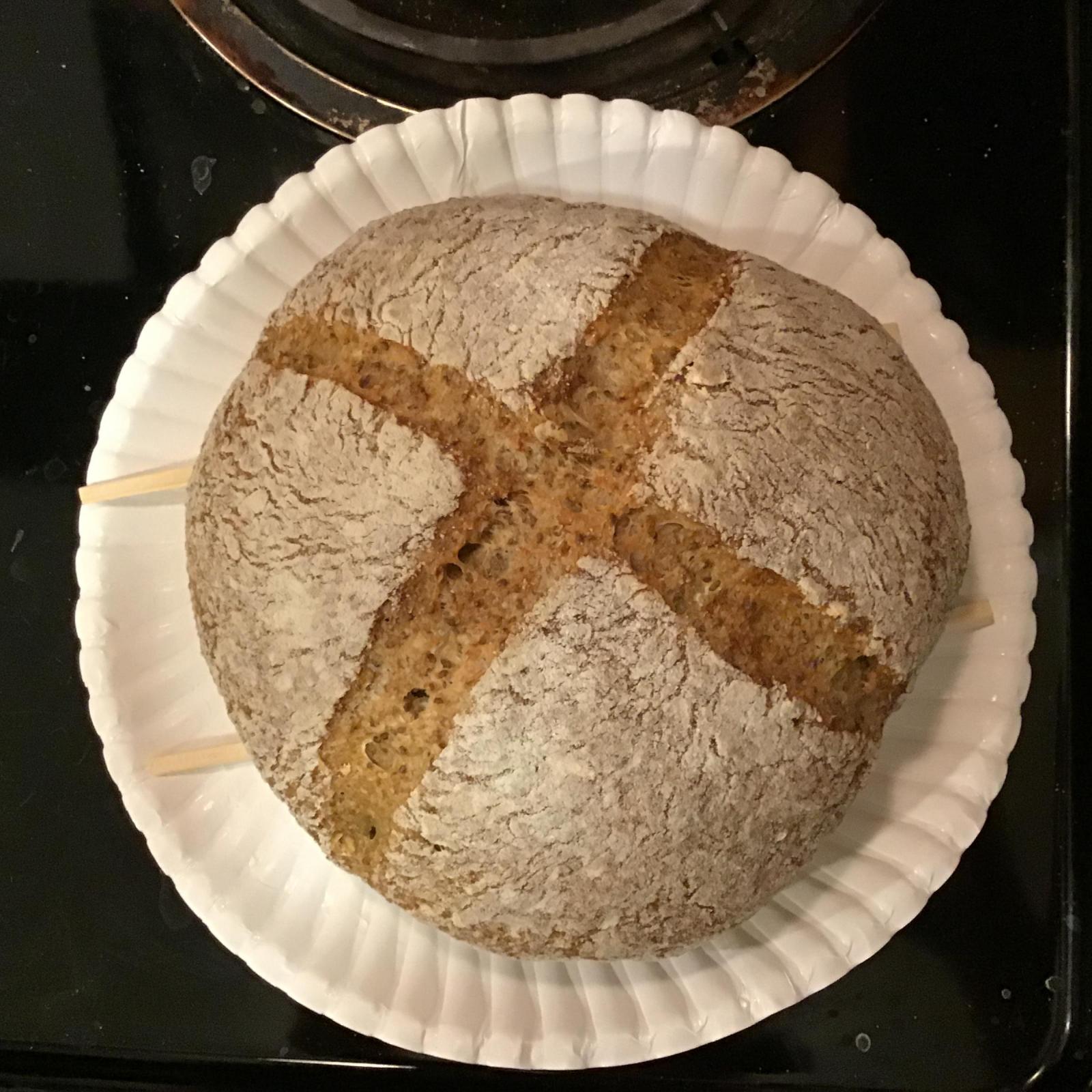 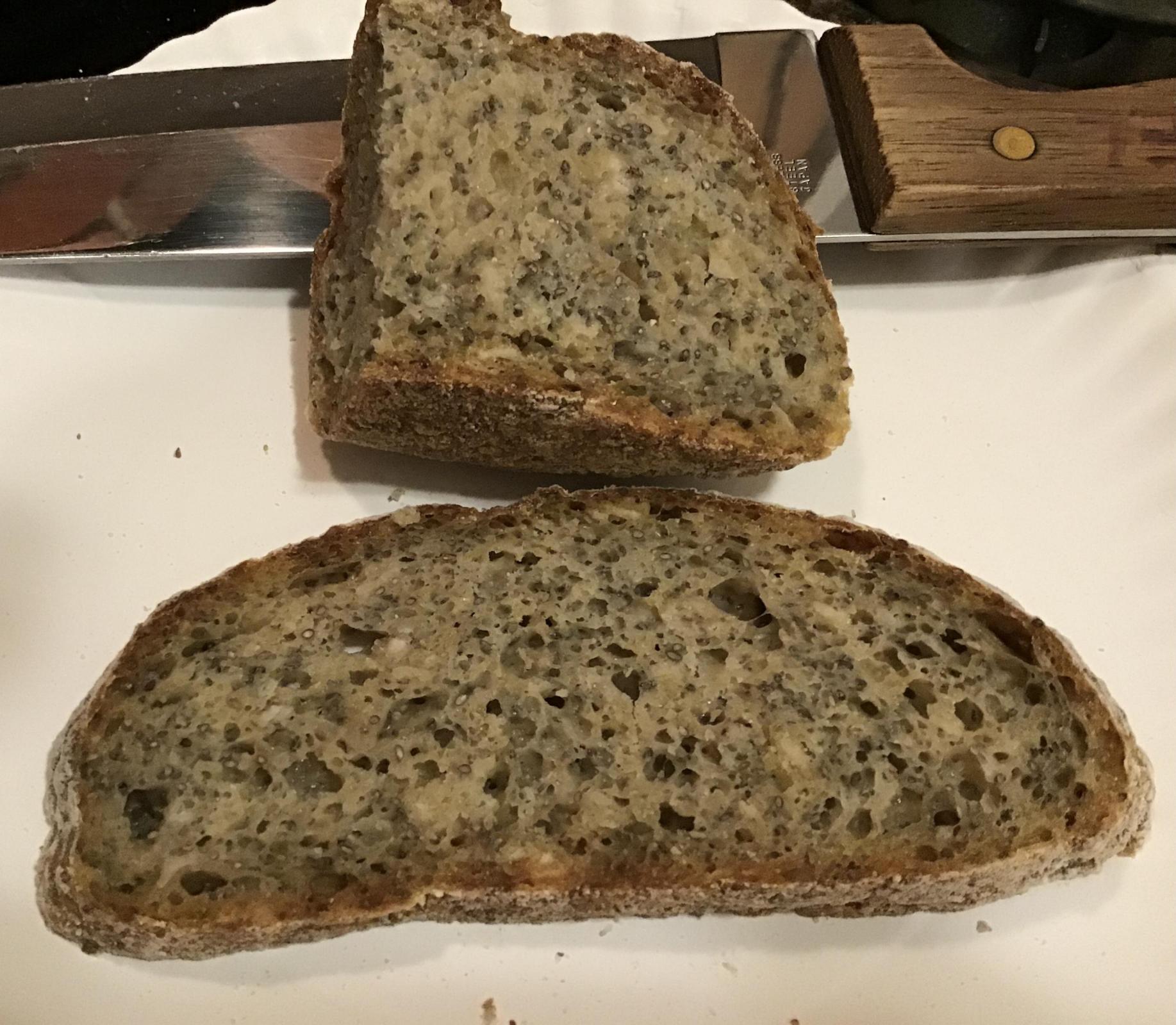 The brown color is entirely from the dark roasted malt wheat. This particular one "Midnight," from Briess, lends a coffee flavor. This product comes already malted and roasted, all I did was run it through a coffee grinder.

The crumb is dense, likely from not enough hydration.

The centers of the millet seeds are uncooked, so they should have been soaked or toasted prior to adding to the dough.

I don't like the mild coffee flavor added by the roast-malt wheat. Perhaps it would be better with an added sweetener. Or, toasting the bread, and eating with jam.

The millet seeds pop out, roll around and make a mess as the bread is sliced. 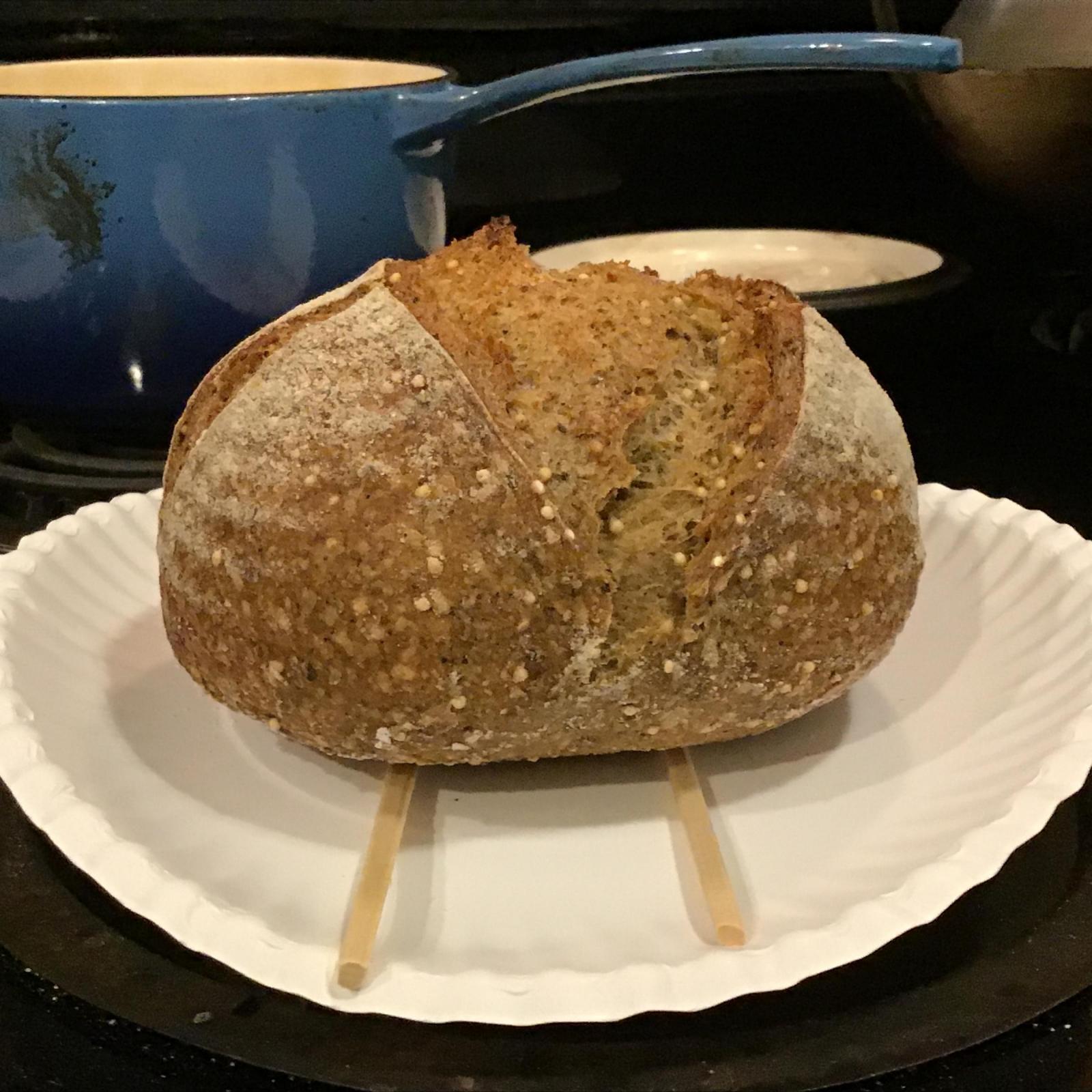 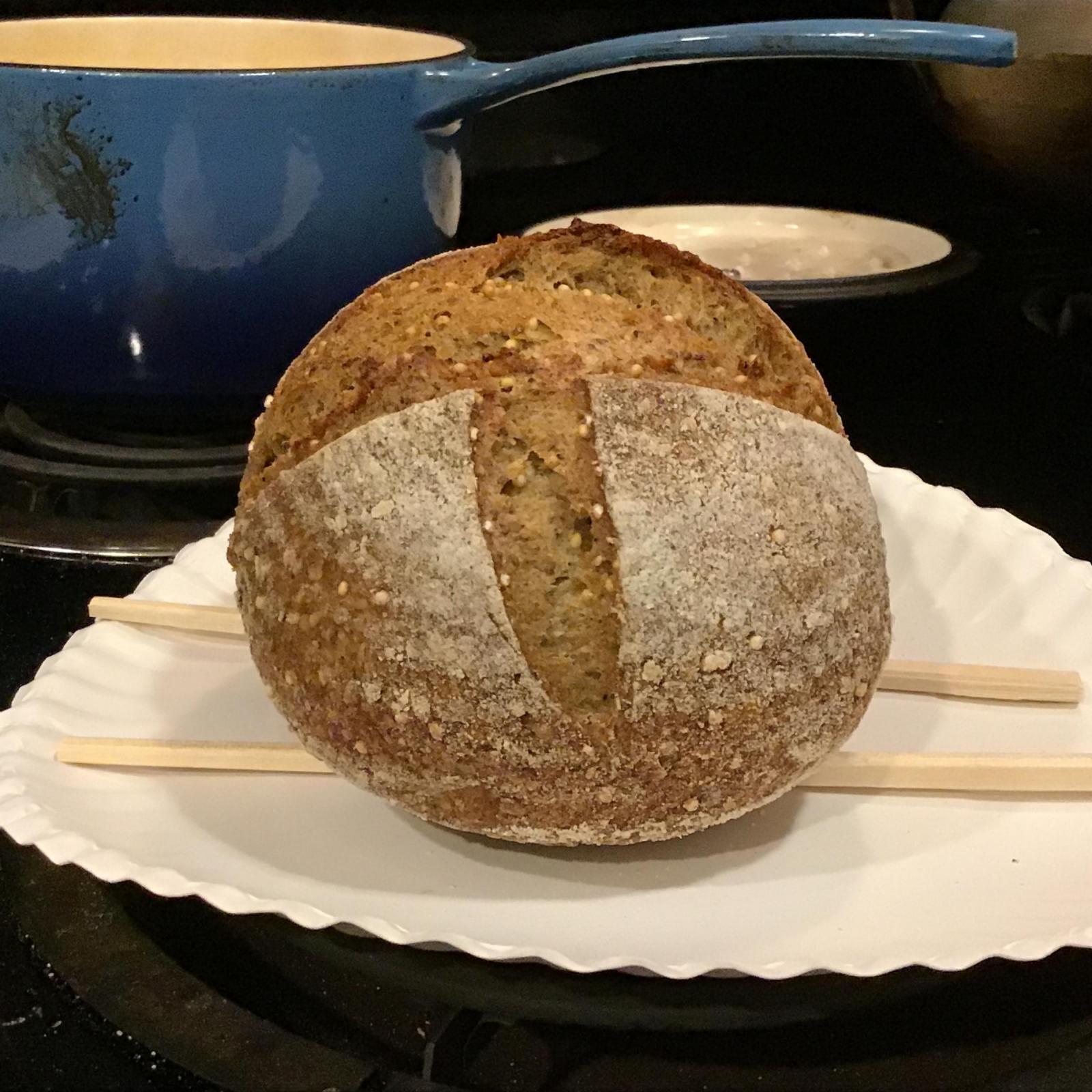 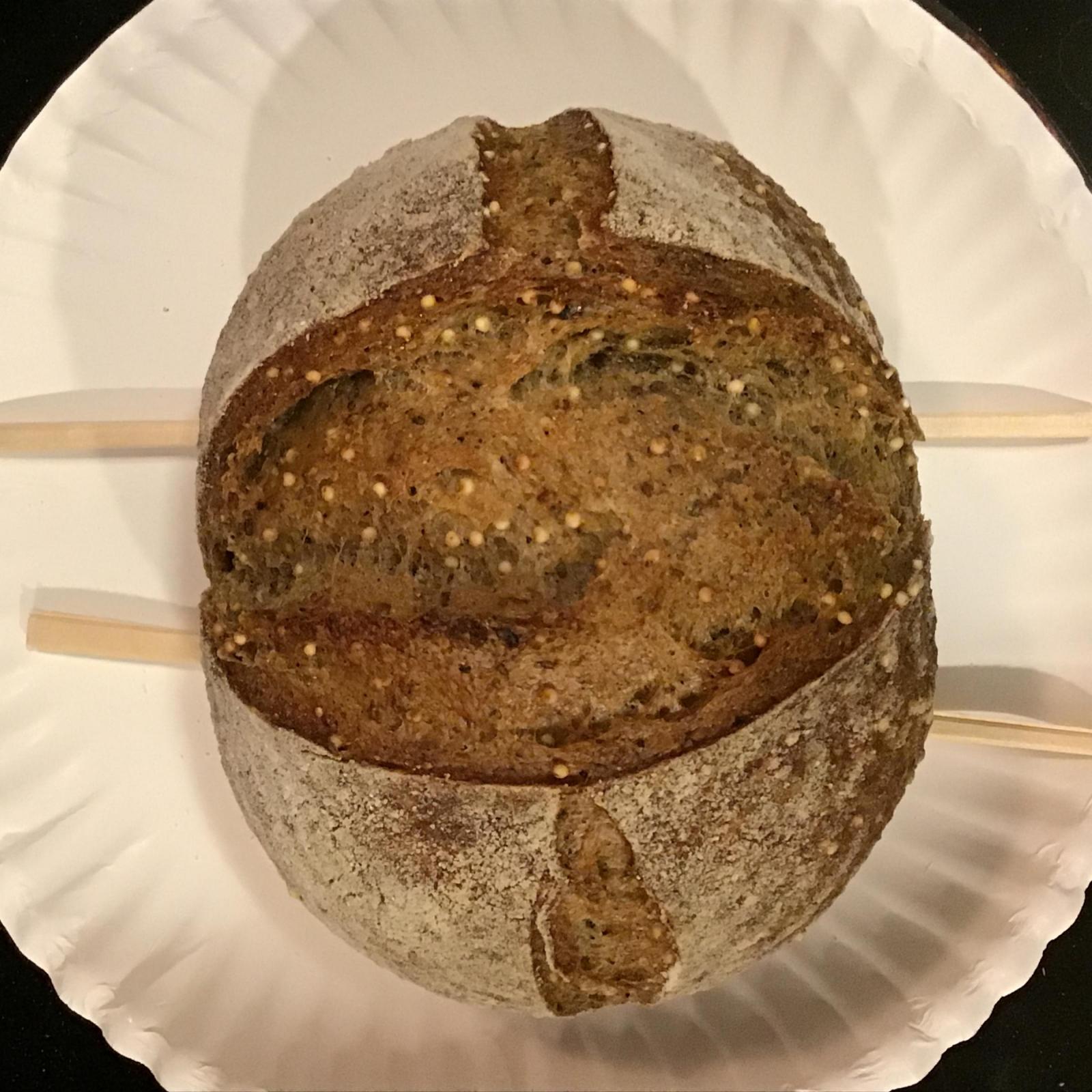 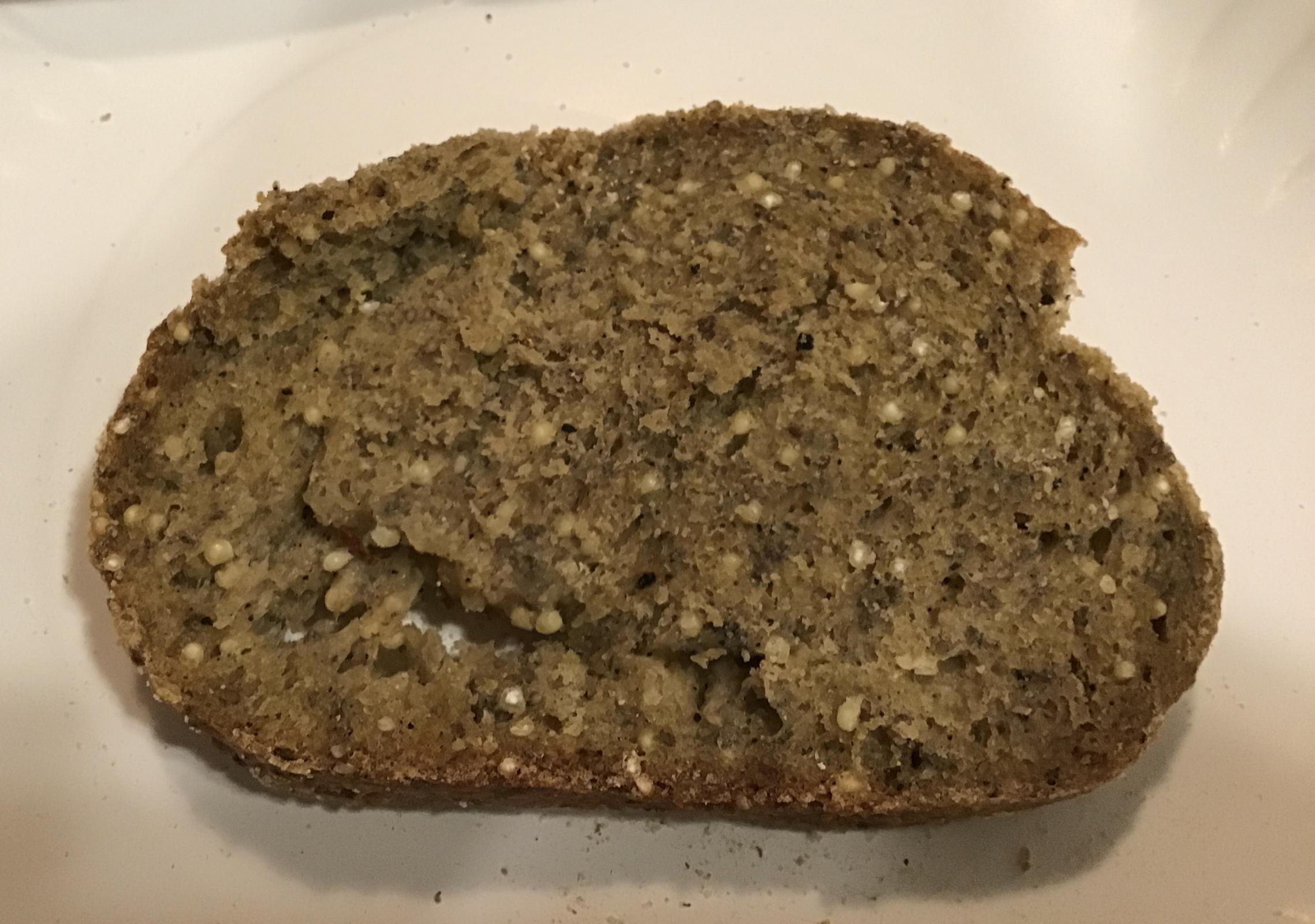 No measuring on this except for 3/8 tsp salt.

The paper plate is 9" diameter. 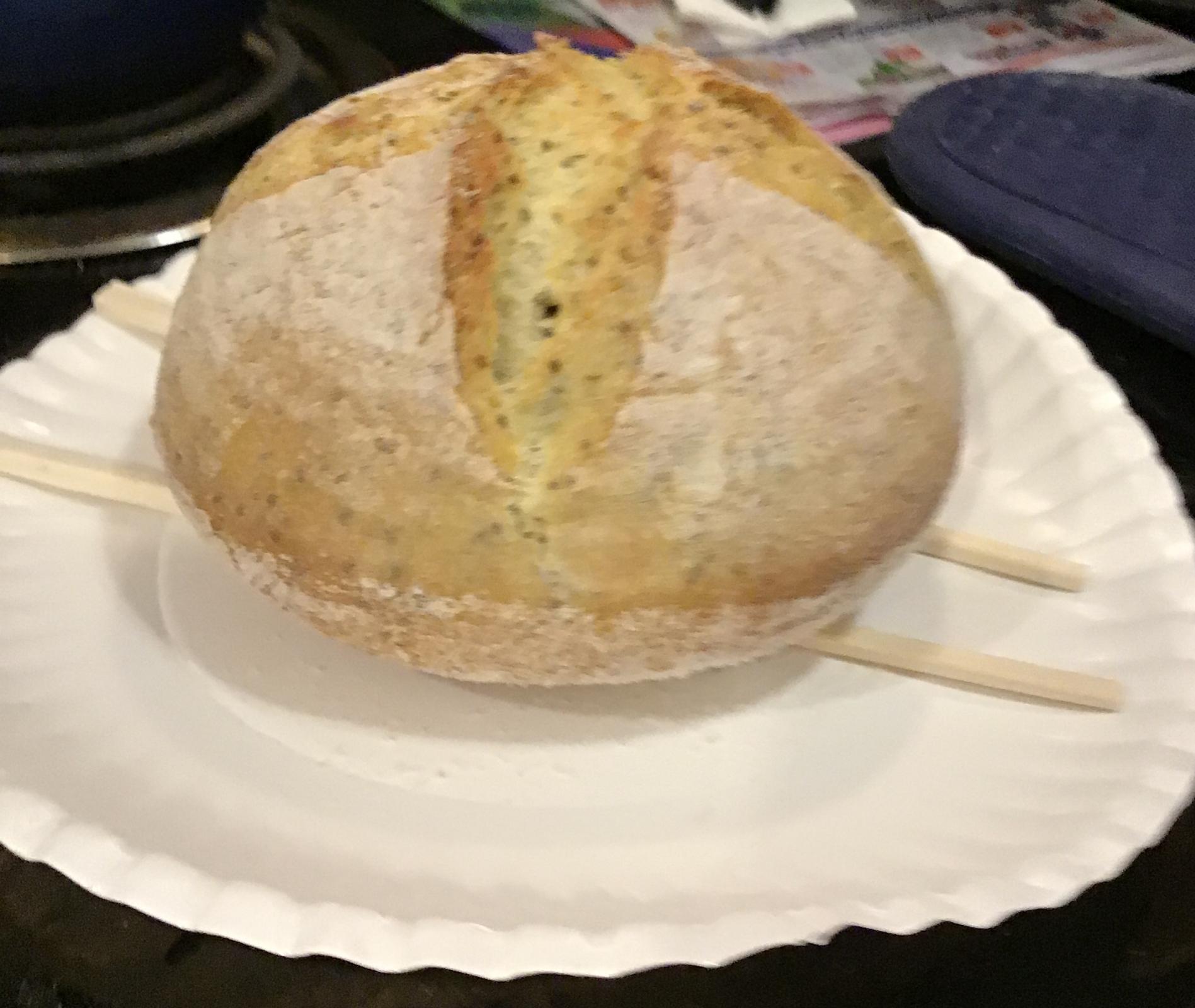 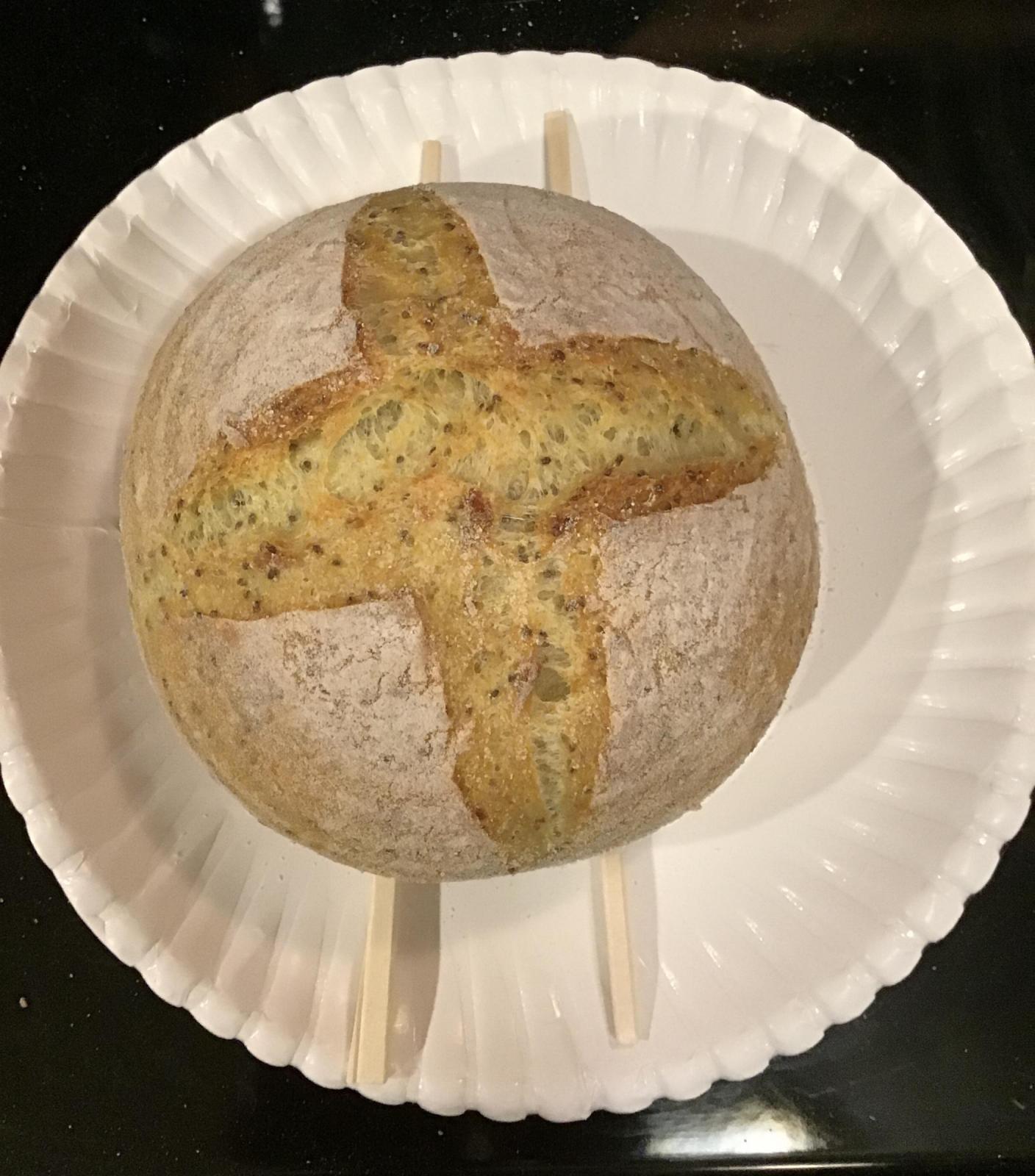 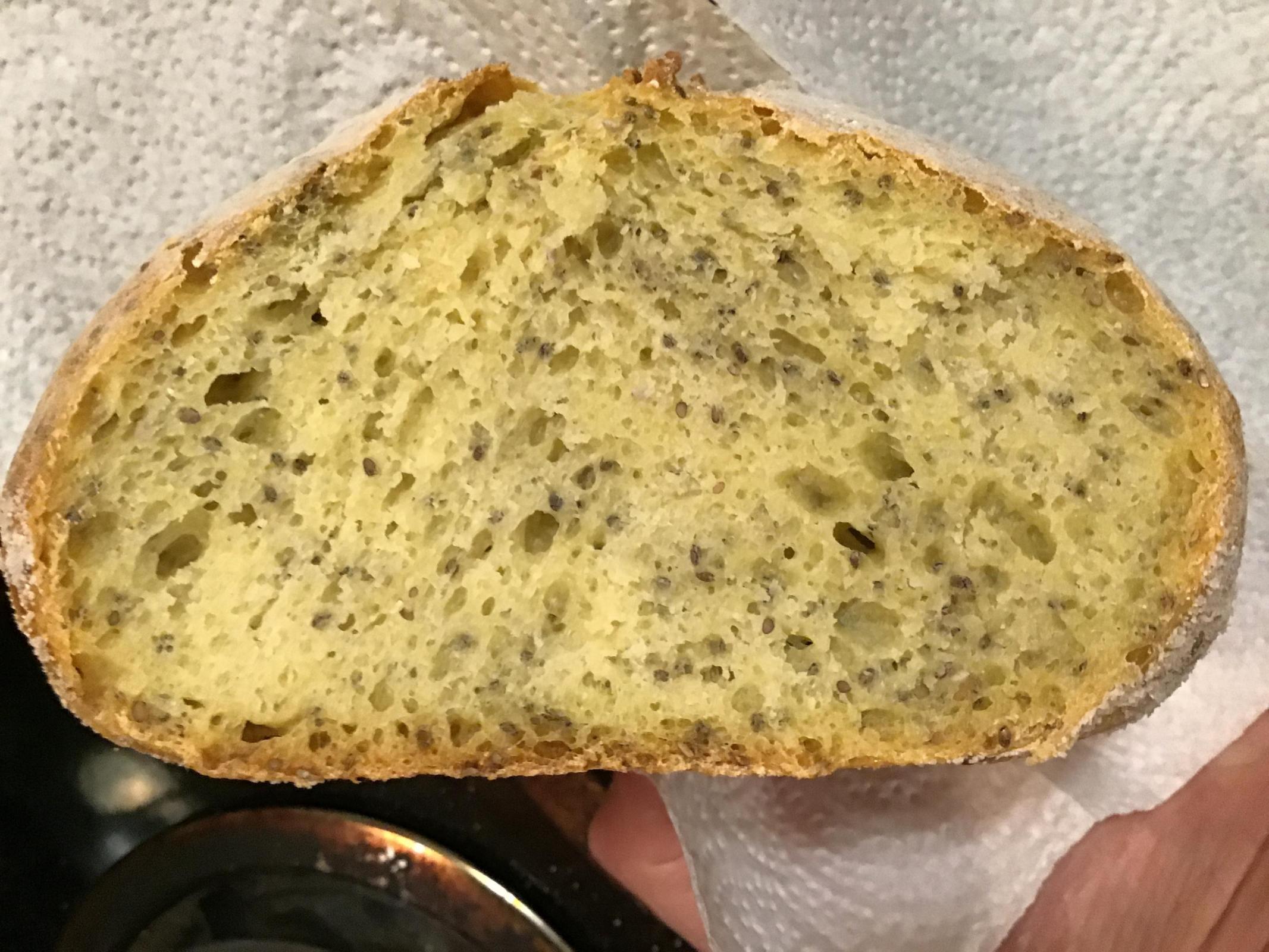 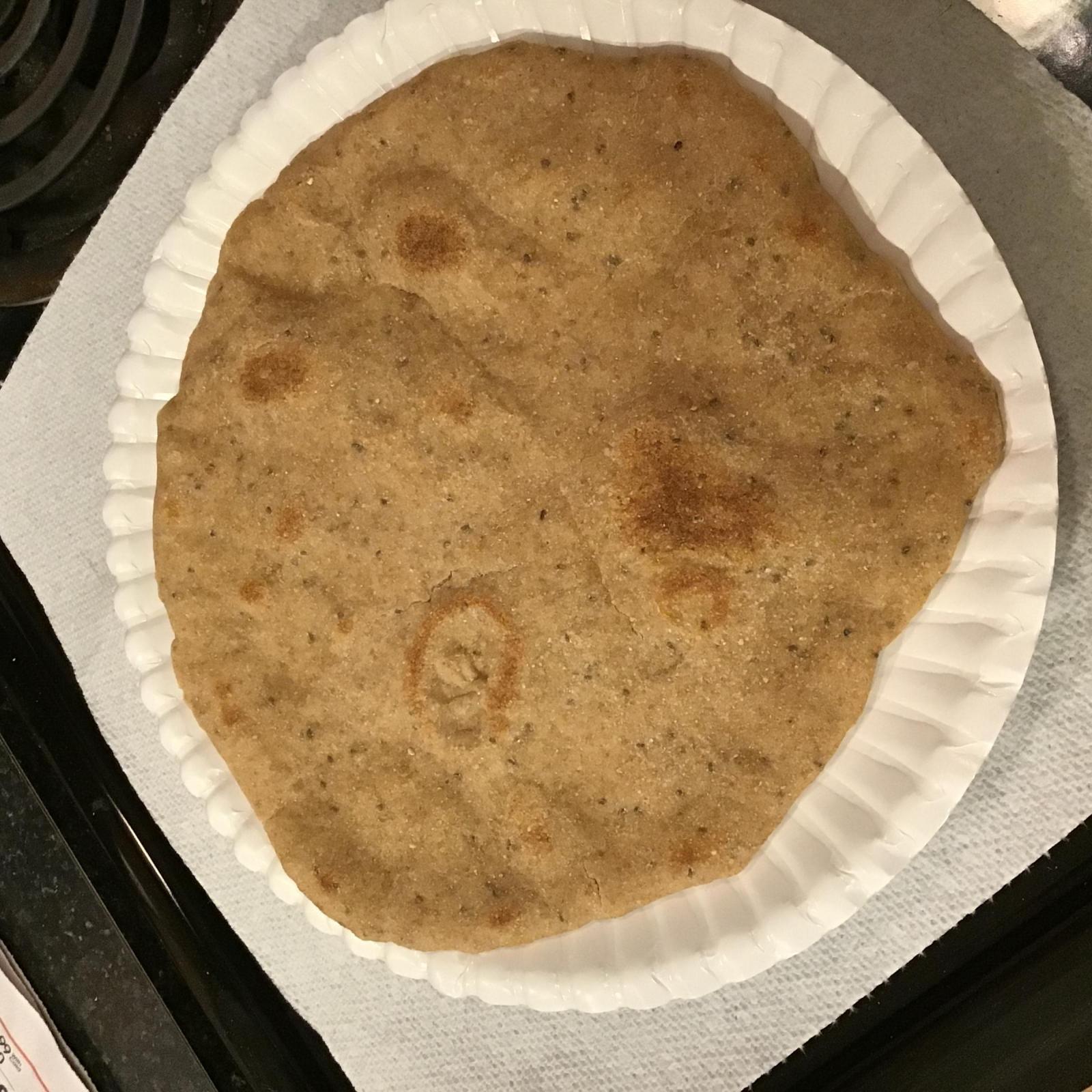 A "Sot-sot" flatbread. Some of this - some of that.   Nothing was measured except for a scant 1/8 tsp of salt.

5. Some home-milled whole grain generic hard red winter wheat, at least 9 years old. It had been sealed in a pouch with oxygen absorber.

8. Hand mix. Hand knead. The above flours were added until it "felt right."

12.  Cooked in non-stick skillet on stove-top. Larger burner, setting 4 (out of 10). Flipped several times, until brown spots on both sides. Maybe 5 min total each side. Maybe 10 min overall.

13. Plus 11 seconds in microwave on high, "just to be sure."  It did partly inflate in microwave.