Result: gorgeous loaf. crunchy chewy crust. The texture is just a little ... moist, like perhaps just a tad undercooked. I forgot to get a temperature. The taste has a nice sourdough tang, but is a little too, too ... rubbery?

Details: I made the basic Breadtopia recipe, with 1/3 whole wheat flour and 1/4 cup of sourdough starter. Even though the dough looked good after 12 hours, I decided to let it develop for a while longer (thanks Floydm!). I declared the dough ready when I needed to walk the dog at the 16 hour mark ("natural timing").

After the fold and rest and 1.5 hours, the dough didn't look like it had risen at all. I forged ahead and plopped it into my 2.5 liter CorningWare French White casserole. A number of references said the casserole was ok to 500 degrees. The loaf got a great oven spring and started browning before I took the cover off. The brown was aiming towards black, so I ended the bake at 42 minutes.

Next loaf (already underway) will be the basic white with yeast. I like experimenting.

Here is a video of me scoring my loaf today:

More interesting than the scoring, to me, was the dough. I made a strange one: last night I made a real wet poolish with a cup of whole-wheat flour, much water (didn't measure) and about 1/4 teaspoon yeast. I also built up my AP flour-based sourdough starter. This morning I then threw them both together with another pound or so bread flour, an ounce of rye flour, a couple of teaspoons salt, and a bit more flour. So I ended up with a slack, rustic-like dough leavened with sourdough and a teeny bit of yeast. I haven't tasted it yet, but it seemed to perform real well. I'm curious to taste what combining the sweetness of a poolish with the tartness of a sourdough does.

I'm trying no-knead bread for the first time, using the sourdough variation I found at Breadtopia. It sounds so easy (and it is), but I'm one of those bakers who is always wondering if I'm doing it right. My dough has been sitting for about 12 hours now at 70 degrees, and it looks ready to me. Bubbly on top, and nice strand development. Perhaps I should go on to the next step, or perhaps I should follow the 18-hour instructions and ... what ... allow more flavor to develop? more later.

Fired up the oven today for the first time this year, and the first time since late october. I had imagined baking on a wintery January day, but as it happened, we had record highs of nearly 50 degrees (in wisconsin) so it wasn't that much colder than the last time. Today's breads: Ciabatta and the Columbia French bread

I started the columbia dough (which has a 3-5 hour first proof) at 9:30, and lit the fire at 10:15. Ciabatta dough followed after that. I let the fire start to burn down around 3:30, and shoveled out the coals by about 4:00. This is a little longer than I usually go, but I wasn't sure if the cooler weather would effect things or not. Turns out I had PLENTY of heat, so I did overdo it a little. Fortunately with a cool kitchen and 2 slow-rising doughs, I wasn't in a rush. After cleaning out the coals and "soaking" the oven with the door shut for a half hour or so, the oven was a lovely 550 degrees. I put the ciabattas in, and they were done in 10 minutes. Turns out I should have left them in a little longer, they look great but softened up a bit after cooling--so the crust is not as crunchy as I normally like:

After this the oven was still a bit too hot for the french bread--the recipe calls for a rather cool 375 degrees. I cracked the door for 20-30 minutes and loaded the bread when it had dropped to 425-450 degrees. I figured I'd just keep an eye on them and bake them a little less than the recipe called for. I had a TON of oven spring on this batch, and was very pleased. They were done in about 25 minutes---three loaves around 1 pound each.

Now, stay with me here--we got a little carried away. The thing with the mud oven is, you spend 5 hours getting it hot, you feel like you need to USE THAT HEAT. So, we stuck in a chicken to roast, and some sweet potatoes! The oven temp was about 400-410 degrees to start, and about 350-375 after an hour. The chicken was done in about an hour and 15 minutes! :)

Of course by now it was eight o-clock. We ate dinner, and I had one last thing to throw in---granola. I made two batches, 2 cookie sheets each, and they took about a half hour per batch. By 10:30 I was done---12 hours after starting the fire. Phew! A really long but really fun day.

I don't think that Poilane bred is worth the price.  My kids lived in Paris for several years and we all thought it was good, but very expensive there.  I can't even imagine what it would cost shipped to the US.  And would it be fresh like it should be.  Try the no-knead bread and make with some wheat or rye or both  mixed in.  It is sreally incredible and much cheaper.

I baked an olive levain today. 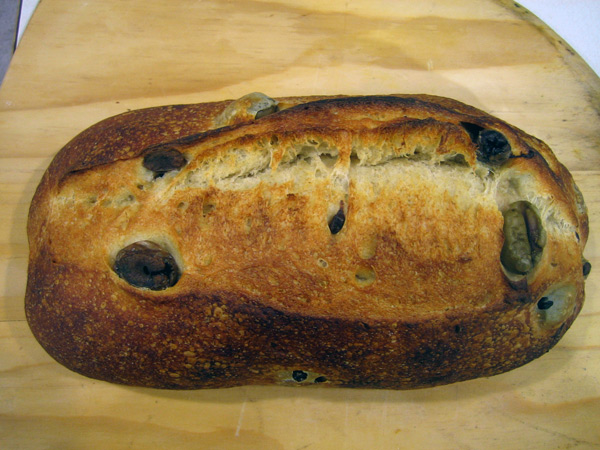 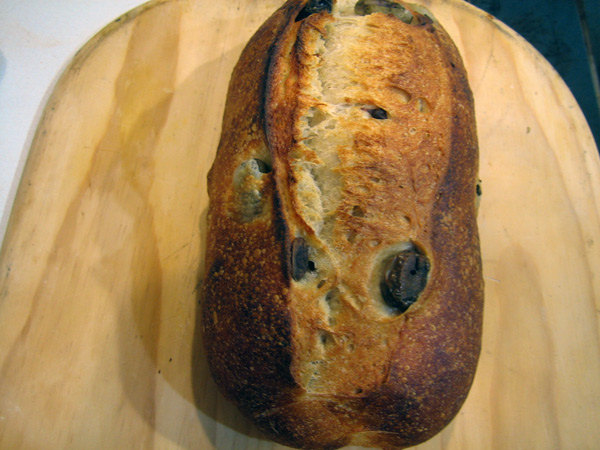 This was basically like Hamelman's Olive Levain: 10% whole wheat, no yeast, just starter. I loved it: 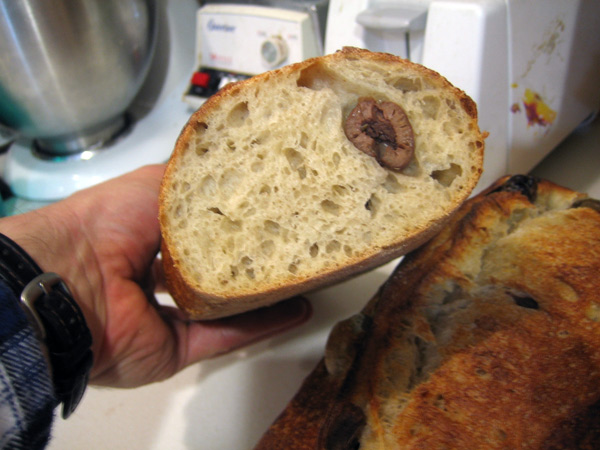 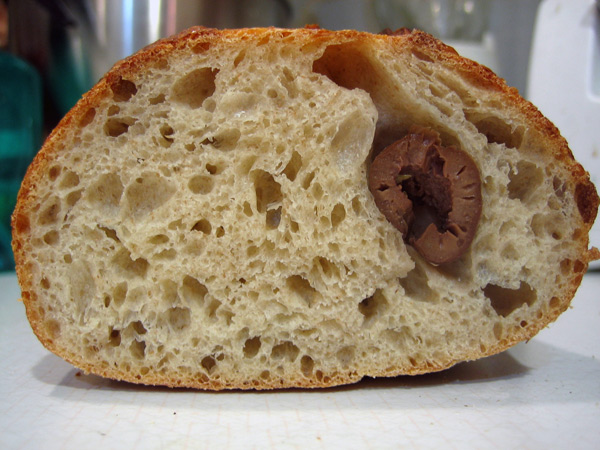 Delicious, but not cheap (well, at least by bread baking standards). The olives alone cost as much as... what... thirty pounds of flour and a pound of salt. I can bake an awful lot of regular sourdough bread for that much money. Yes, ok, to put it in perspective it is still cheaper than a drinkable bottle of wine, but still... baking bread, one gets spoiled by how inexpensive a hobby it is.

Wow is right! Mountaindog recommended this bread, and I have to agree it tastes fantastic! I haven't used Glaser's "Artisan Baking" very much, I think like mountaindog, it was a little too advanced for me when I got it, and then I learned from other books and it was left on the shelf. I also get stuck in ruts, and get lazy and ignore recipes with 5 hour rises, etc!

A couple of notes on deviation from the recipes. One, I just converted a seemingly happy and active wet starter to a stiff one, and it was taking a bit longer than 8 hours to triple in size. It's either the cool temperatures in my house, or I just hadn't refreshed it enough to encourage the beasties that like dry conditions. So, I used a little more preferment than recommended, AND I cheated and threw in a 1/4 teaspoon of yeast. I was on somewhat of a schedule yesterday, and wanted my rising times to be a little more predictable. Even so, I let the first proof go for almost 3 hours, and proofed the final loaves at least 2 hours. (The original recipe called for 4-6, and 3-5 I believe.) Oh and I used malt powder instead of syrup as that's what I had.

I made a fatter batard, a slightly skinnier loaf, and boule in my banetton. They were each around one pound unbaked. The crust is very crackly and crunchy, the crumb (though not as open-holed as mountaindogs) is creamy and lovely. The sourdough tang is nice but not overpowering. There are *very* small amounts of wheat and rye flour in this loaf, and a few tablespoons of toasted wheat germ (which smelled LOVELY), but these tiny amounts added so much to the final loaf.

All and all a relaxing new year's eve bake--I also made a chocolate cake which will definitely be hampering my healthy eating resolutions as it will take a week to eat it!  Oh well!

Holiday baking and the new Joy

I baked some whole wheat rolls for our Christmas dinner and a couple of sourdough loaves for the next few days. They were quite good.

As I Christmas gift, I got the latest version of the Joy of Cooking

. Perusing the bread chapter, I was blown away to see it now includes information on using a sponge starter and ceramic tiles as baking stones. There are recipes for rustic French bread, sourdough rye bread, focaccia, even brioche. True, the Joy of Cooking isn't the greatest book for a serious bread baker, but it interesting to see how artisan bread recipes and techniques have entered the mainstream.

After making a decent BBA Pain Polaine the other day, I next made two breads from Maggie Glezer's "Artisan Baking" book that use a very firm starter. I've made Thom Leonard's Country French bread before (p. 133) and that came out very good, but I was really blown away by how good the Essential's Columbia bread (p. 82) came out! After tasting this Columbia bread, it was disappointing going back to taste the Poilane, I liked the Columbia much better, although granted they are somewhat different styles of bread:

This Columbia is by far the best bread I've ever made, no contest, in fact my French husband and I agree this is the best bread we've tasted outside of France. The taste and texture are wonderful: crispy, chewy, with a very complex sourdough flavor, really not much sour but a lot of flavor! I wonder if it is all the combination of different flours in the recipe, plus the wheat germ and malt syrup...all I can say is this will be my new standard bread to make weekly, as well as to give away as gifts. Next time I make it I may try using oblong bannetons to give the loaves more of a football shape rather than the batards I made here. By the way, that crust is not burnt, the malt syrup makes it carmelize very darkly. I followed the recipe in the book exactly except I retarded the final dough overnight in my cold mudroom for the first ferment. Check out Columbia's excellent crumb and crust:

I made this last night from BBA. My slashing is improving but I don't seem to get them deep enough to get "ears". Here it is right out of the oven:

Anyhow, this poilane miche from BBA tastes very good, crust is very chewy and flavorful, crumb is even and slightly chewy - not dense, and softer than I thought it would be but since this bread is meant to last a week it needs to be to keep from getting too hard too fast. Since this uses a lot of whole wheat flour, I suppose the holes are big enough, I am pretty happy with the rise since this is only my second sourdough attempt at all. Here is the crust and crumb shot: