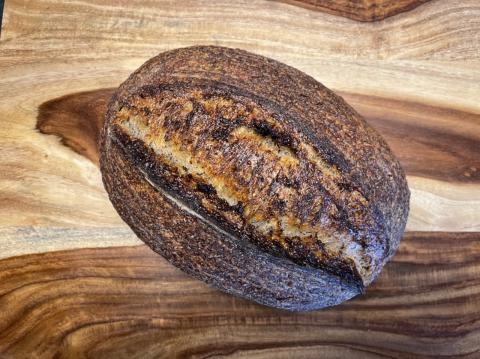 I wanted to bake this bread again because my previous bakes about a year ago all left my wanting.  I made a minor change to Hamelman’s original formula by changing the whole wheat to a 2:1 ratio of whole spelt and whole rye.

1.    Liquid Levain   --- Make the final build 12 to 16 hours before the final mix and let stand in a covered container at about 70°F. Mix Levain and Soaker at the same time.

2.    Soaker   --- Pour the boiling water over the grain blend and salt, mix thoroughly, and cover with plastic to prevent evaporation. Make the soaker at the same time as the final build of the levain and let stand at room temperature. If grains that don't require a hot soaker are used (such as rye chops in lieu of the cracked rye listed here), a cold soaker will absorb less water, and therefore it's likely that slightly less water will be needed in the final dough.

3.    Mixing   --- Add all ingredients to the mixing bowl. In a spiral mixer, mix on first speed for 3 minutes, adjusting the hydration as necessary. Mix on second speed for 3 to 3 1/2 minutes. The dough should have a moderate gluten development. Desire dough temperature 76°F.

6.    Sharped and placed in banneton.

7.    Final Fermentation   --- After shaping leave on the counter at room temperature for 1 hour aliquot jar reached 75-80% rise, then place in fridge at 3ºC for 24 hour cold retard. 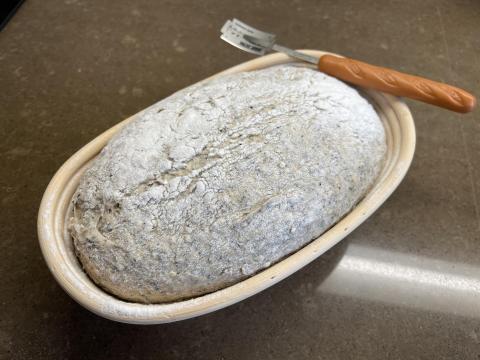 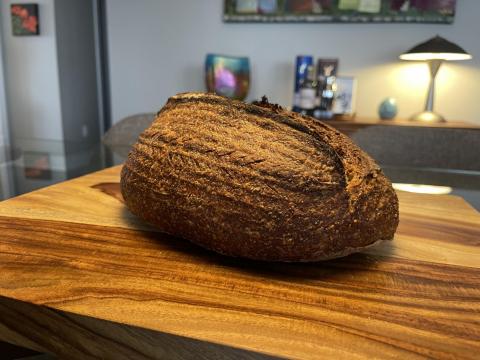 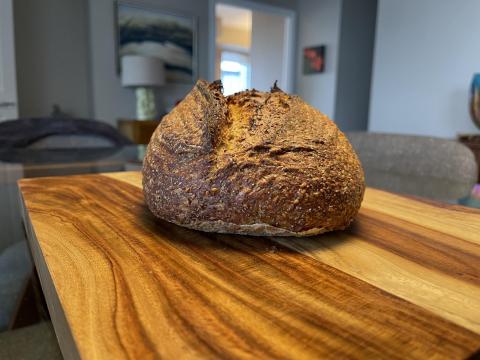 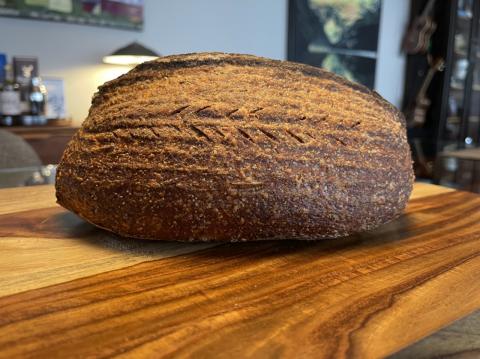 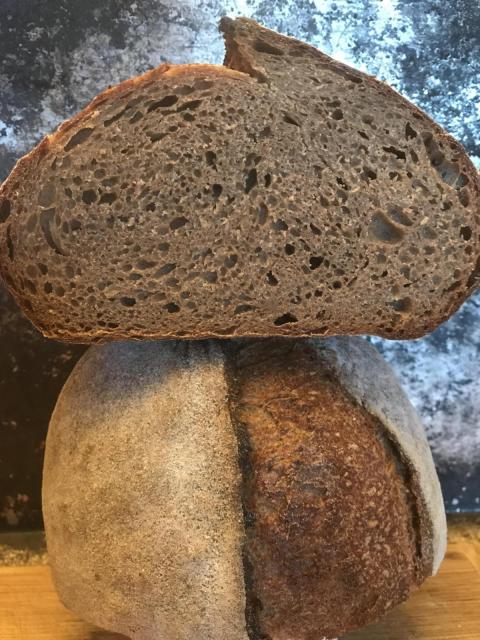 A continuation of JMonkey's Desem with a whole wheat soaker (the epoxy method outlined in Whole Grain Breads) and an aliquot jar for proofing.  Bulk fermentation ended at <= 25% and final proof ended at around 75%. 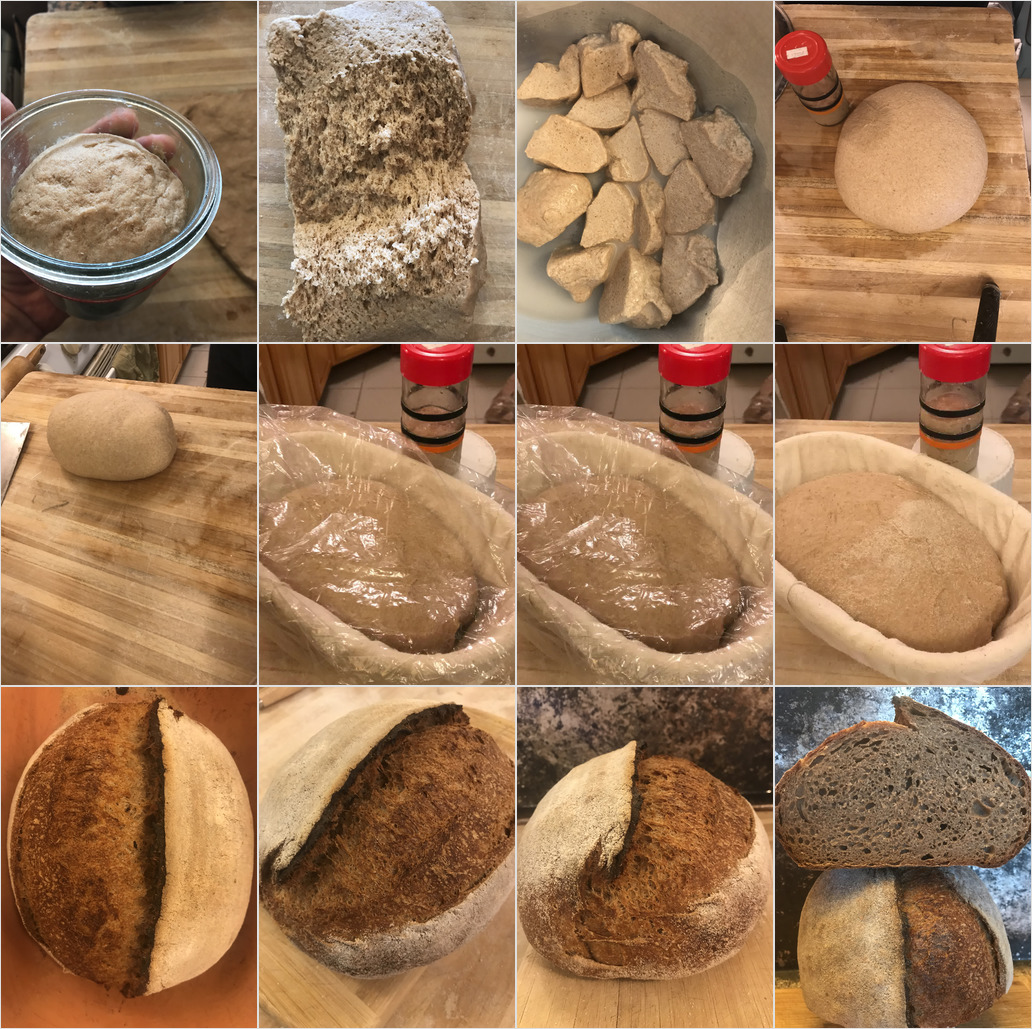 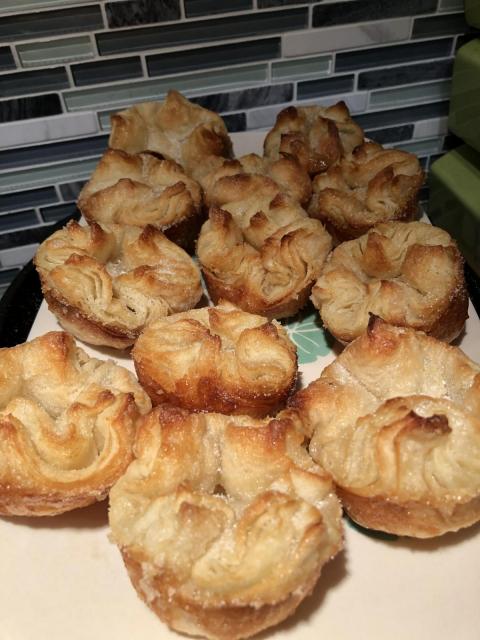 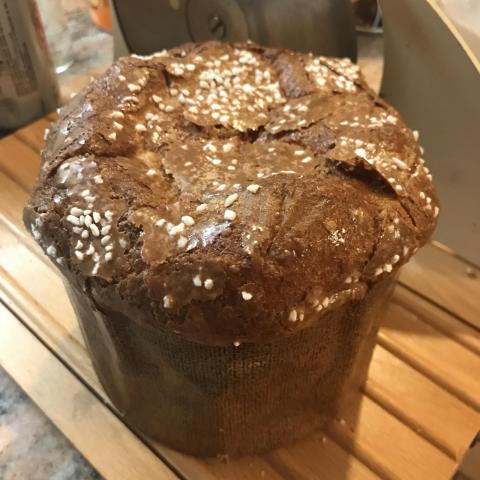 After getting some great advice from the group I have been baking panettone this holiday season with considerably more success than in previous years. I have written out directions for my use next year and have added them here in case they are of interest to anyone else. I will post some pictures separately. Thank you all for your shared expertise!!  Charlotte

Upping the ambient and lowering the stone 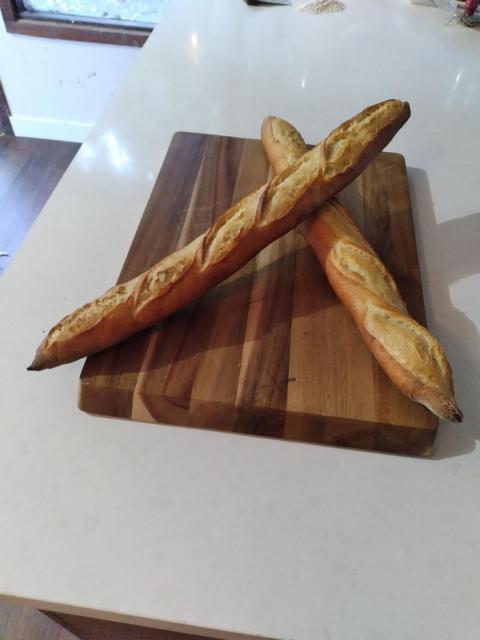 Getting some improvent by bumping Temps a bit and taking the stone out for a few minutes before baking.  It seems with my element setup that reaching an ambient of 450F gets the stone up to 550F which will scorch the underside of my loaves.  Today I jacked the top element a bit more and then just removed the stone for a few minutes to allow it to drop down to around 450F.  Results look better yeah ? 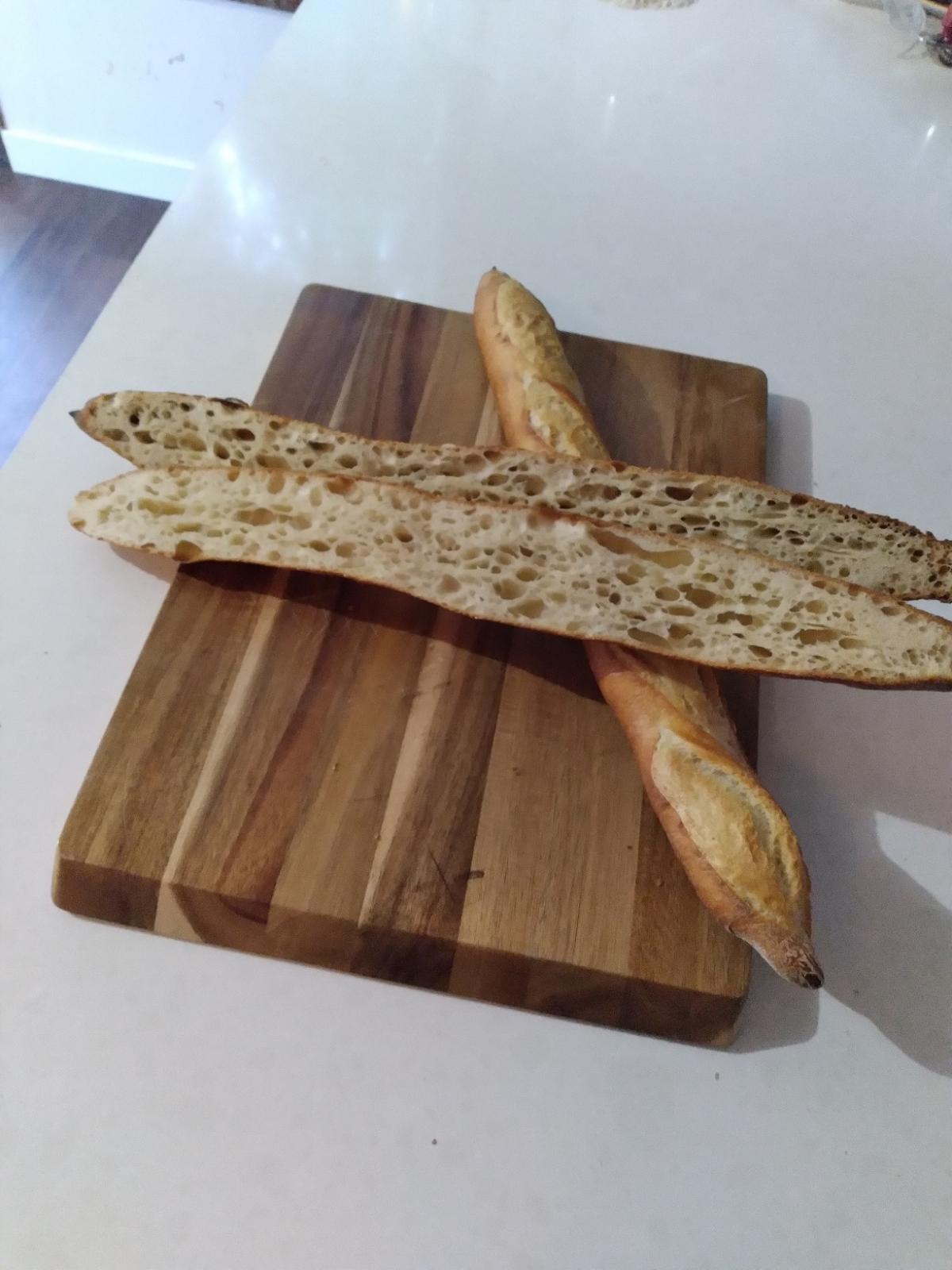 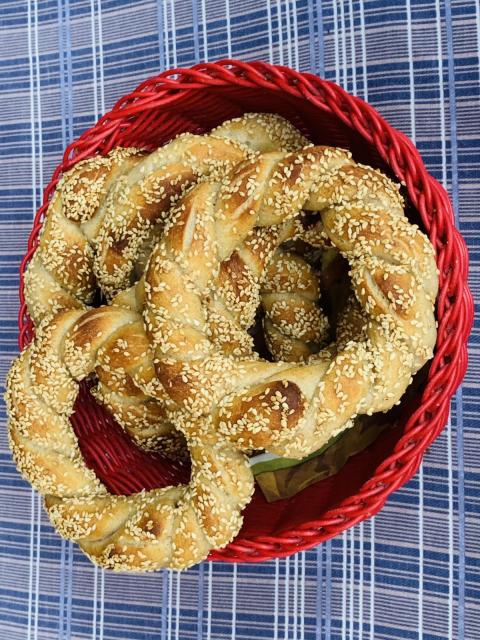 I found this recipe in a German paper.

These are really nice, crunchy, and a good alternative to bagels. The basis is a wheat sourdough and they are dipped in syrup and sesame seeds before baking. 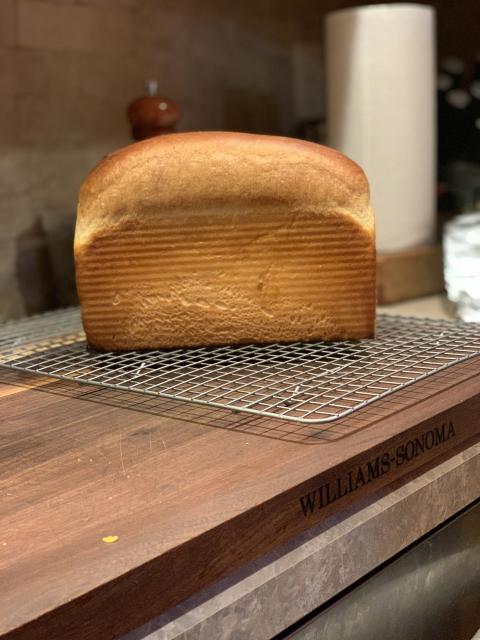 This is nothing fancy just a regular sandwich loaf. But is my first after having heart transplant. Getting back at it is best therapy. Unfortunately while I was out my starter didn’t make it so I’ll be just doing yeast for now. My schedule is hectic right now and just don’t want to worry about feeding and maintenance. I did some research and just wanted some more insight on is it just as simple as adding the amount of flour and liquid back to recipe to convert some of my sourdough to yeast for now? And do I just use as much yeast as I want to control how fast the fermentation?

Thanks for any help 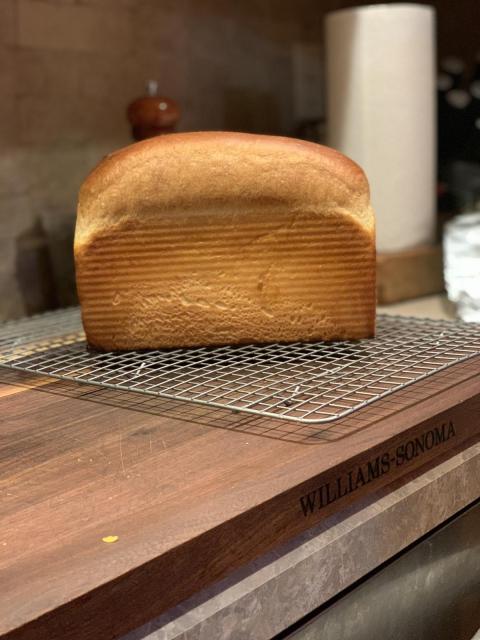 Jumped on the babka train 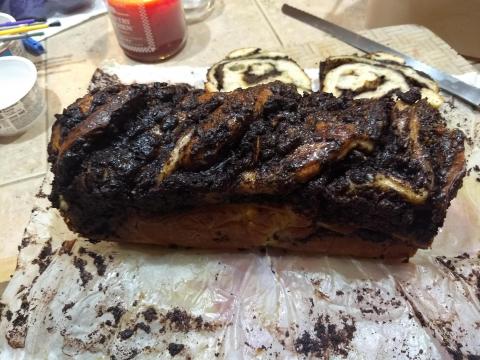 After seeing everyone's delicious bakes, I finally got to make one of my own. I used Maurizo's recipe for the dough, but scaled it ~1.3x to fit a 13" pullman, so 1075g of dough. I used more filling than called for because I love sweets. One end was chocolate filling mixed with nuts, and one end was the chocolate filling with the cacao nibs. In total it was 300g of the chocolate filling, 90g of some extra baklava filling (nuts/sugar/cinnamon), and a handful of cacao nibs. I didn't use all of the simple syrup, so next time I will make half. I rolled it out more thinly than the recipe calls for, and I'm glad I did, so that the filling was better distributed. 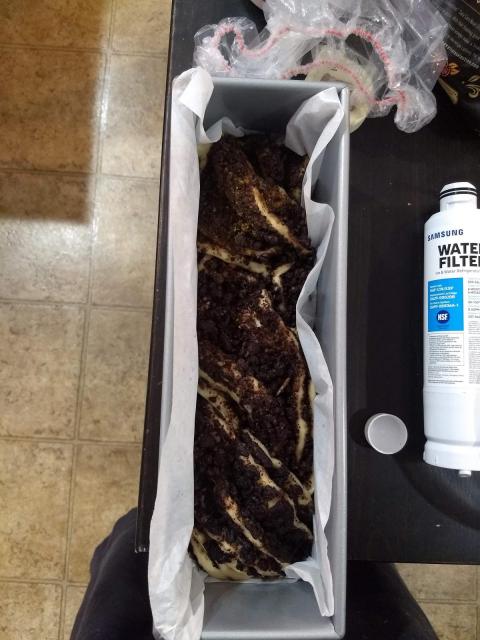 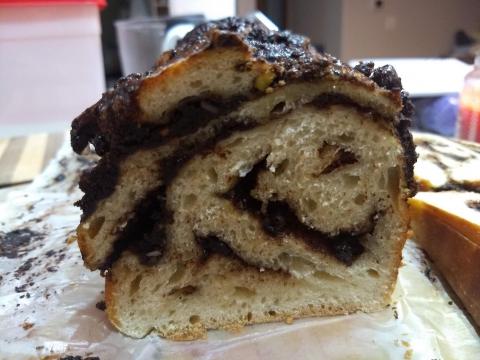 Very filling heavy, but I'm pleased with how it turned out, and it's pretty easy. It is very decadent, so I froze part of the loaf for later. I like the additional crunch and flavor of the nuts.

Rolling it up such a long loaf was a bit cumbersome. 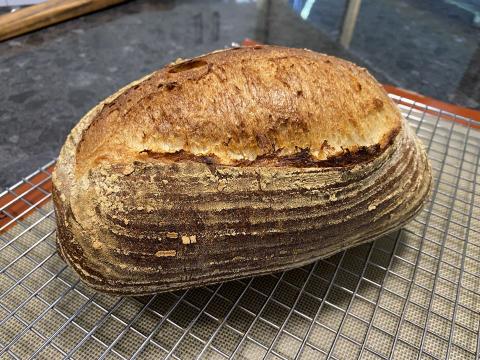 This is a 10% whole-wheat sourdough that is our everyday bread. It is great in the morning with bacon and eggs and an extra slice with vegemite or a jam. I bake it once a week or sooner if we run out. I gift a loaf to the guy next door occasionally as he mows our front nature strip when he is doing his own. A great sourdough that I have been baking for years and never misses.Cheers,Gavin 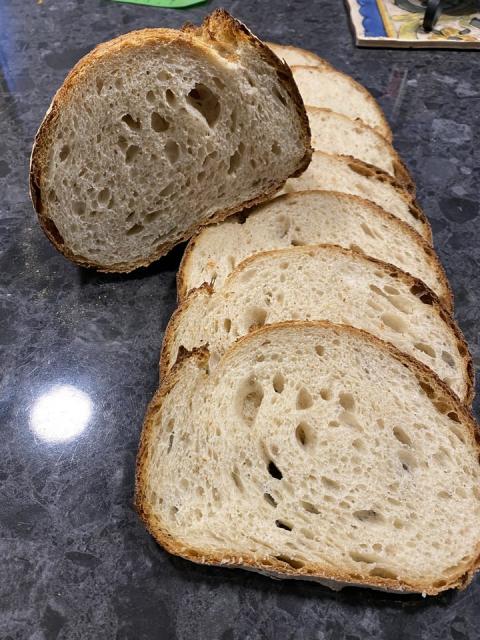 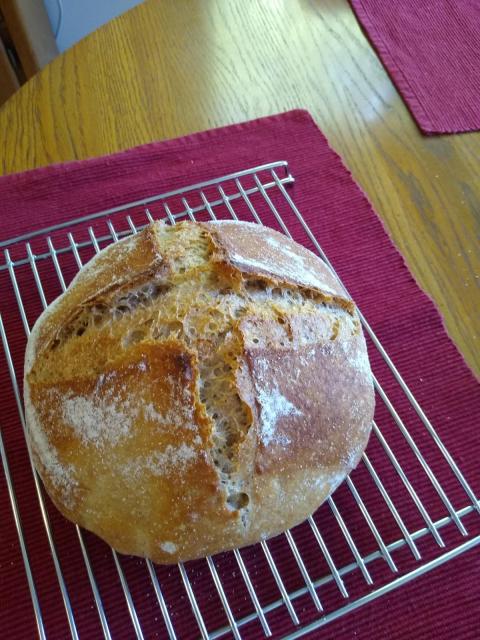 ....and getting brave enough to post my progress. This is a no knead yeast recipe. 50% KAF AP, 50% home milled hard red winter wheat, 76% hydration. Progress!

I'm starting to feel comfortable enough with the basics to want to get into the sourdough world. Onward!

Now to figure out how to add the crumb shot.

Edit: even figured out how to add photos! I had better quit for the day while I'm ahead. 😁