Well this is my 2nd attempt at Jeffrey Hamelman's whole-wheat bread. The first turned out pretty well so my wife requested more (the best toast ever according to her). I started the pre-ferment the morning before work, mixed up the dough after work and then fermented/proofed. Unfortunately time was my enemy as I was unable to allow a full final proof. As a result I had some out of control oven spring action I think. No matter, tasted better this time than last! (different flour) It was a rainy weekend, so today I stayed in and baked. I baked Honey Whole Wheat Bread, which, as I mention, was an attempt to recreate the Good Earth rolls, which I've been fixating on recently. They tasted really good. I've been trying to decide why my whole wheat breads are tasting better, whether it is because I've gotten better at baking techniques, am using better ingredients (King Arthur's Whole Wheat Flour instead of Bob's Red Mill Whole Wheat Flour), or have just acquired a taste for whole wheat finally.

I also baked a couple of loaves of a white french bread (basically using the daily bread recipe) that weren't bad. I left my poolish out for about 18 hours before making the final dough, I noticed a bit of an off flavor... the bread was less "sweet and nutty" and more "tart and cheesy." No matter, it was still better than anything I could pick up at the local grocery store.

I also set up another website: Ajax Hacking. Setting that up is giving me a chance to play with Drupal 4.7 (this site is running 4.6). I'm liking 4.7 a lot, so I suspect I'll be upgrading this site in the next few weeks. People will enjoy the improvements.

That is all for now.

I had a good bake Saturday morning, but I ruined my oven in the process.

I was making two 1.5 pound loaves of hearth whole-wheat sourdough, and two more of the same, but sandwich bread. I was just ready to put the boules in, so I stuffed two oven mitts wrapped in aluminum foil into the vents to trap the steam. I put the boules onto the stone, poured two cups of boiling water into the steam pan and shut the door.

The steam, alas, found a way out -- right up through the digital readout and computer controls for my gas oven. The display started to blink in and out. I removed the foil and opened the door to let the steam out, but it was too late. It still works, but the dial and the readout don't match. When I've set it for 400, for example, the readout shows 280. And when it finally heats up, I get an F2 error, whatever that is.

So no pizza Saturday night. A fellow from Sears is coming by on Tuesday to fix it. I hope.

Gave away my first starter today

I've got folks lined up all the way til June to get some sourdough starter, thanks to my Craig's List ad, and in the past two days, I gave away my first batch. Two baggies of whole-wheat starter and two baggies of white. Since it's a stiff dough, it's easier to give away. Wouldn't want to try bringing the 100% stuff to the office on my bike.

I also finally finished up my sourdough primer document to go along with it. Three recipes, conversion advice for tranforming commercial yeast recipes into sourdough, and standard care and feeding info.

Looks like I might end up getting some free organic greens and herbs out of it, too. A fellow who delivers to Boston every weekend told me he'd gladly share some of his harvest for some starter.

Good baking weekend, though one of my loaves was almost a disaster. (pics below)

I've been making two loaves of 100% whole wheat sourdough sandwich bread every weekend for our weekly bread. One goes in the bread box, the other in the freezer. Trouble is, we usually run out by Thursday. So this week, I made up the dough for my usual two loaves of sandwich bread and then made dough for a boule of 100% whole wheat sourdough, hearth-style. Pretty much the same recipe as the sandwich bread (flour, water, starter, salt, some honey, some olive oil), but I leave out the oil.

Everything was going great. After it had finished its autolyse, I added salt to the sandwich bread. Kneaded it up for about 20 minutes and then did the same for the hearth bread. Let them rise all morning (took about 3 hours),folded the hearth dough once, then degassed the sandwich bread for a 2nd rise while I shaped the artisan bread. Popped it in the fridge for an overnight retarding, and started cleaning up from the morning's bake: flour, starter, salt ... er ... salt.

I'd forgot to put salt on the artisan bread post-autolyse. Visions of eating sour cardboard for the weekend briefly entertained my thoughts, which led me to a quick decision. I pulled the shaped loaf out of the fridge, flattened it out, added salt, and kneaded it up a bit to mix the salt in. Let it rise again, then shaped, and popped it in the fridge.

As I suspected, the hearth bread didn't have a very open crumb. A 2nd rise does wonders for flavor and getting rid of the grassy whole-wheat flavors in the flour, but it also helps make the crumb more uniform. All the same, it's very, very tasty.

Also made pizza with roasted yellow pepper, turkey sausage and fresh basil (note to self: put the basil under the cheese next time!) and some 70% white whole wheat cheddar, dill and scallion rolls (tasted great with the grilled whole chicken for Sunday dinner).

And here's a shot of the interior of the boule. Like I said, kinda tight, but still tasty. Has anyone had much luck getting a seriously open crumb from 100% whole wheat?

A couple of pics

I couple of pics just to prove I've not been totally neglecting my baking: 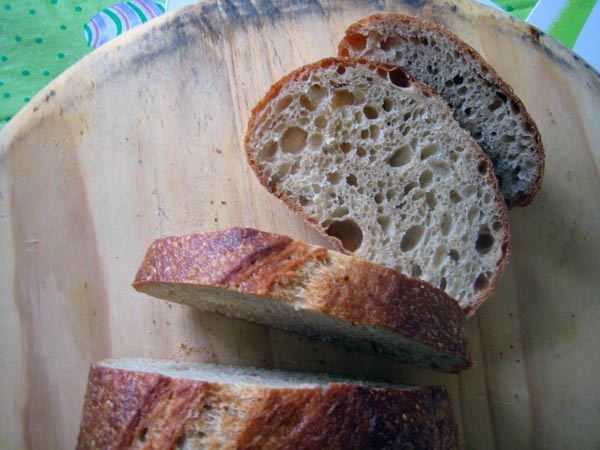 A loaf of my daily bread I made a week or two past. Actually, I used about 20% whole wheat flour, so I suppose it was more like Hamelman's rustic bread. 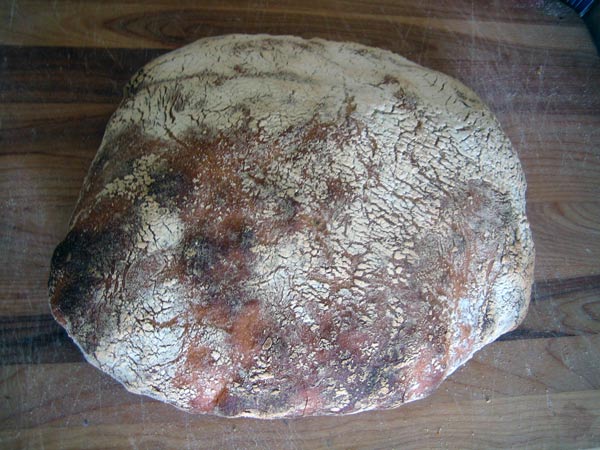 A ciabatta like loaf I made this weekend. The dough was a bit too goopy. I should have done another series of folds, but I was getting impatient. Tsk, tsk...

Well, things are starting to look up for me in the bakery business. I may have an opportunity to go to just one job. For those who have followed my blog here, I have been working both a full-time and a part-time job for almost a year now. There was even a three week period when I had two part-timers.

I am presently working part-time at a local Mexican bakery that also does artisan breads. What an awesome opportunity this has turned out to be. I am in the process of talking to the owner of the bakery about going full-time and leaving my job with the railroad. Not a big railroad, so I don't make a huge salary like most think. It is very decent, though, and my boss is probably the best boss I have worked for. I hate to tell him I am leaving if things work out at the bakery.

But baking breads is a passion of mine. It is somewhat of a spiritual experience for me. Eventually I hope to run or own my own shop.

So those of you who pray to YHVH, keep me in your prayers. And for those who do not, wish me well.

I know my family would love it if I had one job. I could be home in the evenings and on the Biblical feasts.

This weekend i replenished my supply of dinner rolls, by processing all the dough in the style of bagels. Boiled then baked.
Got the tanned colourm but still lacks the shine...Sigh..

Every weekend, I bake 2-3 loaves of sourdough (usually whole wheat) for my family's weekly bread. I love sourdough, and I particularly love that I've figured out (finally) how to coax sour flavor out of our sweet New England microflora (long, cool bulk rise with a stiff starter).

I absolutely hate, however, having to throw away starter when I feed it. Drives me bannanas.

So I had an idea earlier this week. Why not place an ad on Craig's list and give it away? I came up with a quick ad: http://boston.craigslist.org/zip/155223285.html

Less than 24 hours later, I've got 18 folks lined up, all of whom will gladly give my sourdough "waste" for the entire month of May a happy home. At this rate, I'll just have to put up one ad per month.

So now, I can make my sourdough guilt free. :-)

The quest for the perfect sandwich

What with spring cleaning, business at work, helping family move, my baking has been seriously curtailed the past month. This weekend, hopefully, I'll get a chance to spend a day puttering around the garden and baking a couple of batches of bread.

I've redirected my enthusiasm for good bread in another direction. I recently discovered Banh Mi, Vietnamese sandwiches. My office is in an area with a number of Vietnamese shops. I've tried the sandwiches in 5 or 6 different places now and totally fallen in love. The toppings are good, but for me the bread is what it is all about. Seriously, I don't think I've found better French bread in town as I've found at my favorite Banh Mi shop, a little hole-in-the-wall place next to a laundromat that always has a half dozen chain-smoking Vietnamese guys sitting out front. Two bucks a sandwich too: can't beat that.

Now that I'm looking for them, every day I'm discovering additional Banh Mi shops. Pho in the fall and winter, Banh Mi in the spring and summer. Vietnamese food is my new favorite cuisine.