This morning marked my return to baking following a long hiatus. The holidays, vacation, and grant writing all converged to make baking an impossibility. My starter, left unattended for weeks, was on its last legs. Fortunately I was able to bring it back to former glory with only a couple of feedings. I began the process for making Hamelman's 'Vermont Sourdough' yesterday, retarded overnight and baked this morning. This has to be my favorite sourdough bread, the small inclusion of rye and mild tang give a perfectly balanced flavor.

Since I haven't baked in a while I really took my time and savored the process. 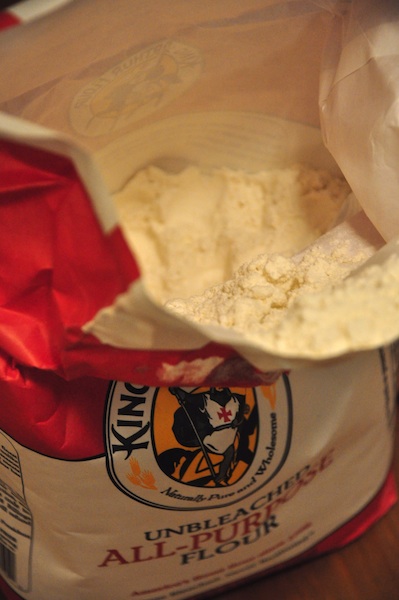 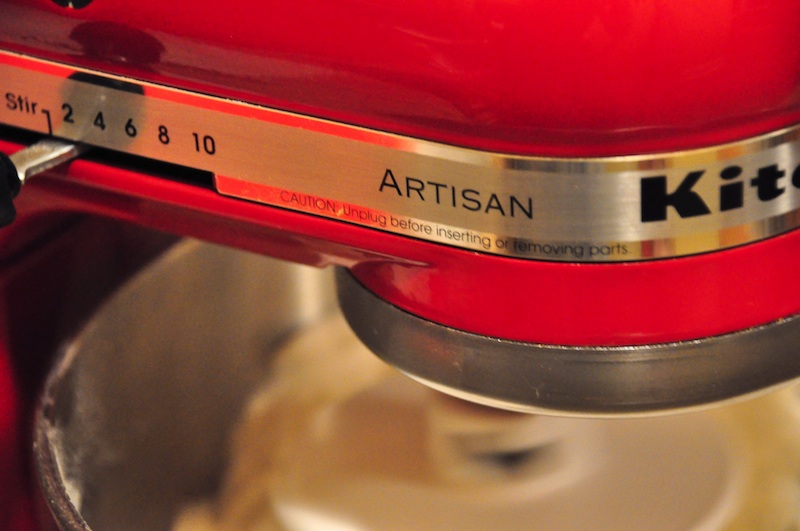 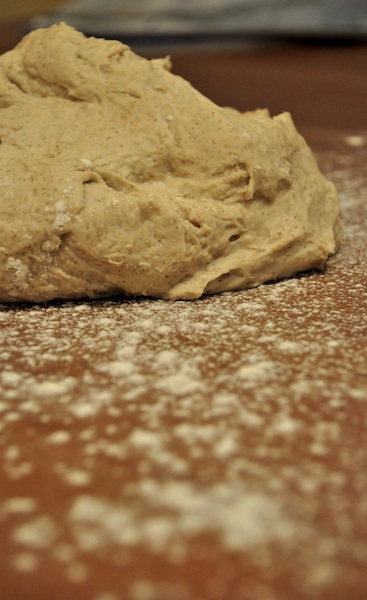 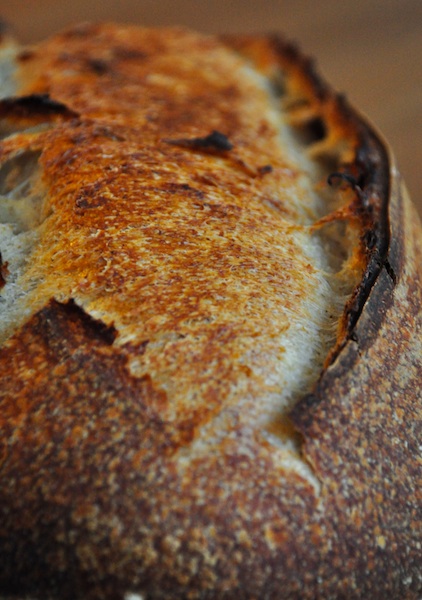 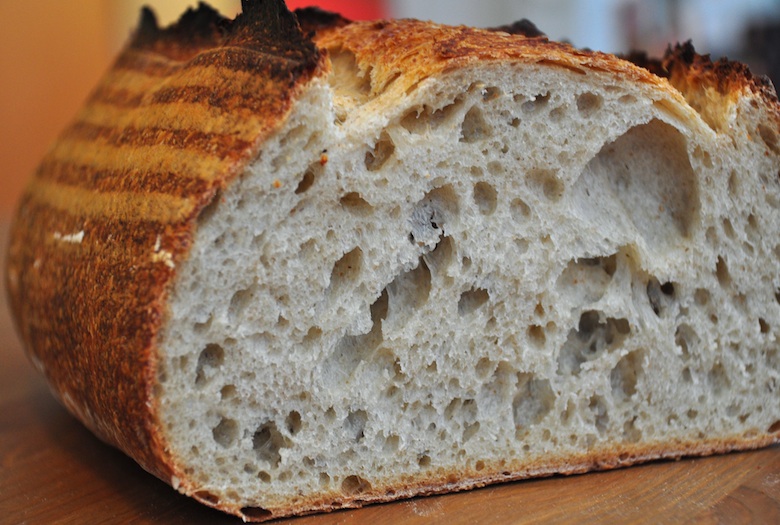 The weatherman has forecast a brutally hot day in the city... heeding his warning my girlfriend and I went for an early morning bike ride whilst my doughs were rising, and returned to bake them before the heat set in. On the agenda for today was a sourdough rye with walnuts (from "bread") and Larry's English muffins (the original recipe can be found here).

I have always enjoyed english muffins, but have never thought to make them, so I was excited by Larry's recent post. I used an electirc griddle to 'cook' them and was very happy with the results. The muffins were pillowy and light with a delightful hint of sour from the levain. 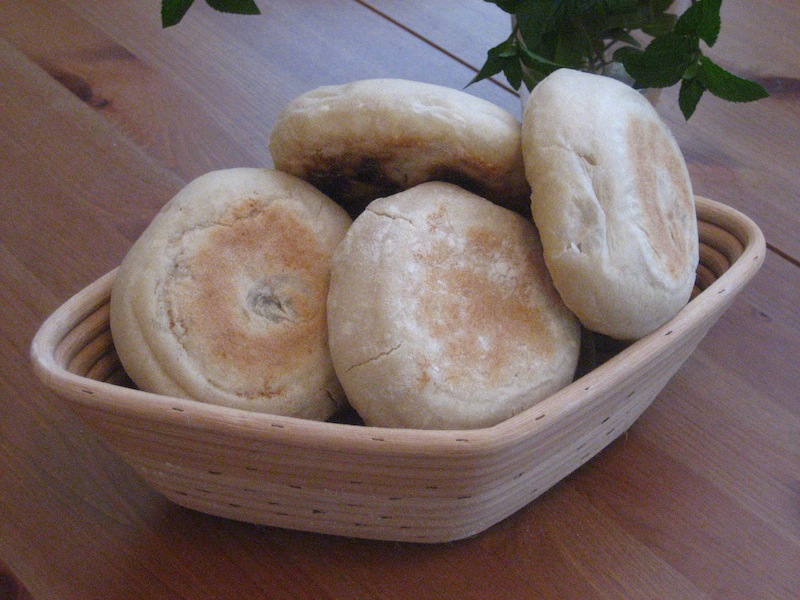 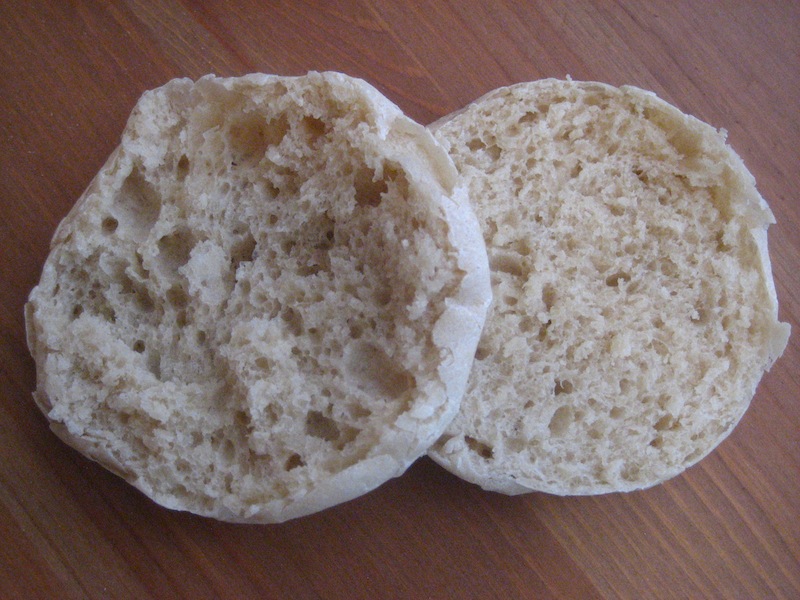 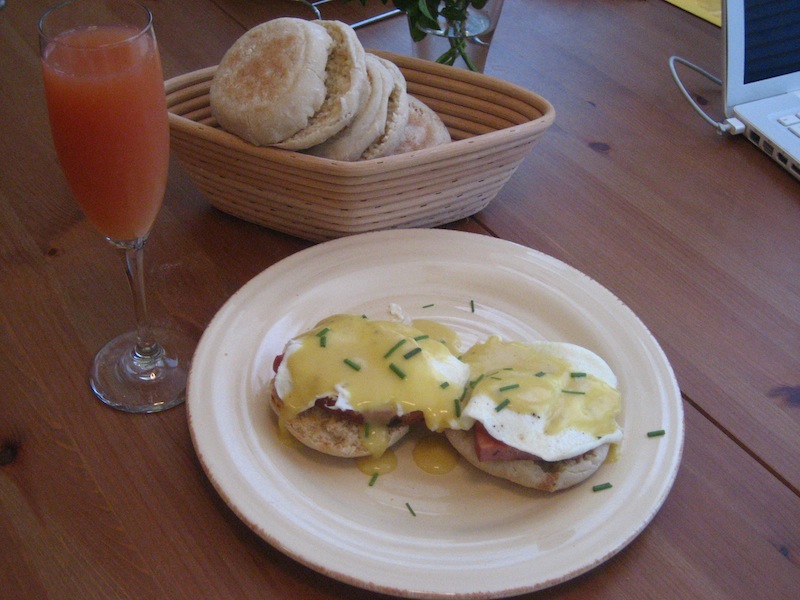 The sourdough rye with walnuts came out fairly nicely too. The dough was surprisingly wet for 68% hydration, however I kept to the recipe and reisted the urge to add more flour. In terms of presentation I decided to proof the loaves seam side down, and the allow the natural folds in the loaf to open up in the oven, as opposed to scoring them. 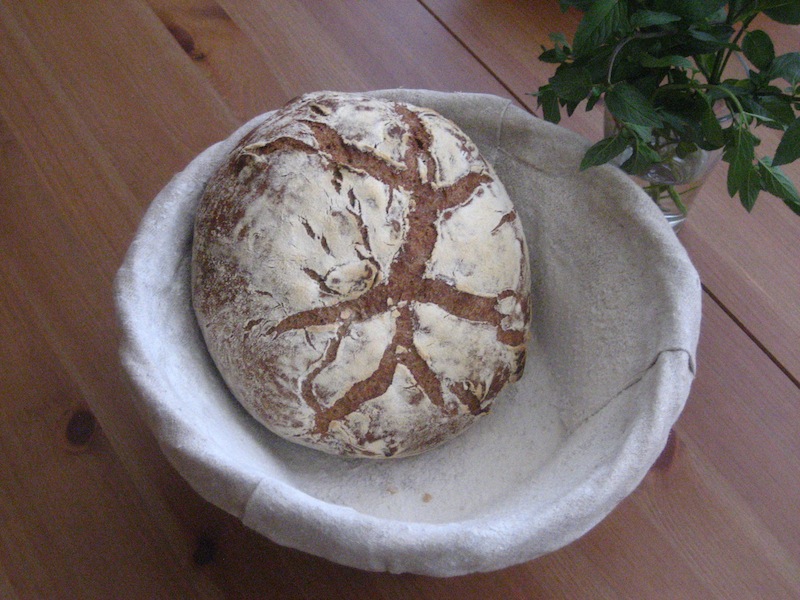 This week I tried my hand at the 'sourdough seed bread' from Bread by Hamelman. This is the first time I have attempted this loaf, however I am yet to be displeased  with a single recipe from 'Bread', and so fully expected to be satisfied with the outcome… I was not disappointed.
The dough was a little tricky to work with and tried its best to make a mess of my Kitchen Aid mixer… I take no pleasure in reporting that it accomplished this task with vigor! The mischievous ball of flour, water and seeds insisted on climbing its way up the dough hook, all the way up to the moving parts… Needless to say, much time was spent by myself and my very patient girl friend to undo my mess.
Attempted destruction of a kitchen aid aside, the endeavor paid off. The loaves baked up beautifully with a thick crunchy crust. The toasted seeds add a wholesome deep flavor to the bread which can be enhanced even further by toasting your slice first! The crumb was relatively open and even, however I feel this is the one area that I may be able to improve on a second attempt… possibly increasing the hydration slightly to achieve a more open structure. 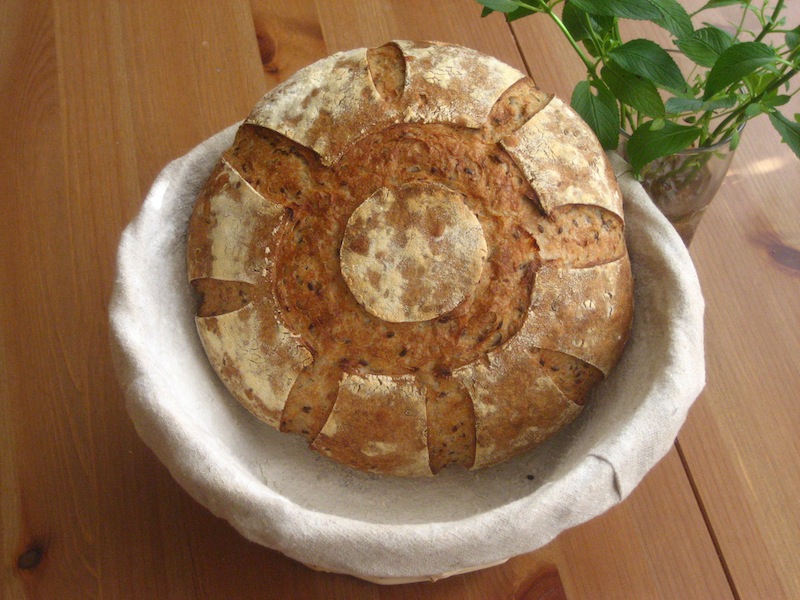 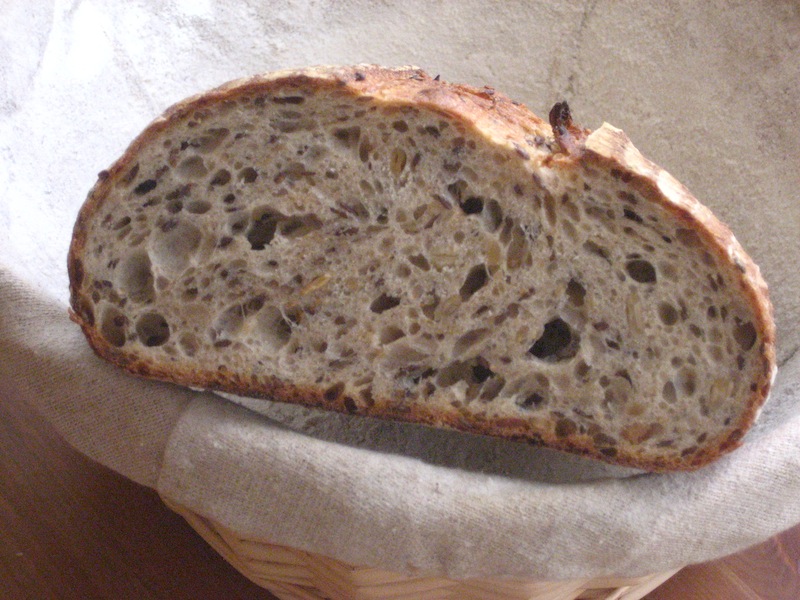 I've been taking it easy with the baking lately due to the excessive heat in center city Philadelphia, which has been hovering around 100 for the past few days now. I always feel guilty running the air conditioners and the oven at full tilt simultaneously, half expecting Al Gore to knock on my door and give me a lecture. Regardless, I had the itch to bake, and so I went back to one of my favorite recipes, the Vermont sourdough from 'Bread'.

The levain should be made 12-16 hours prior to the final dough, however with the high temperatures of the day I only gave mine 10 hours.

Mix all of the ingredients for the final dough, less the salt and allow to autolyse for 20 min. Add the salt and mix for 2min.

Bulk ferment for 2.5hr with 2 stretch and folds.

I used all of the dough to make a single boule. Proofed for 1.5hrs... again this was shortened from the actual recipe due to excessive heat in my apartment. 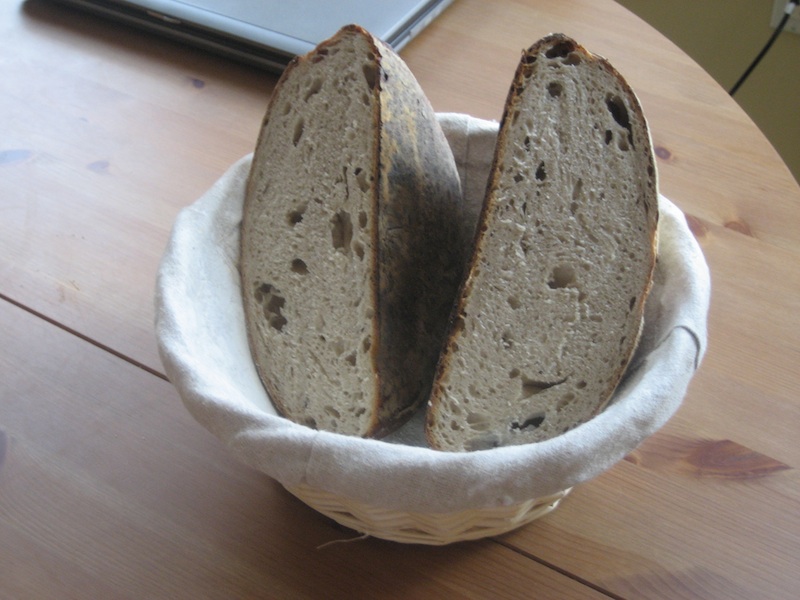 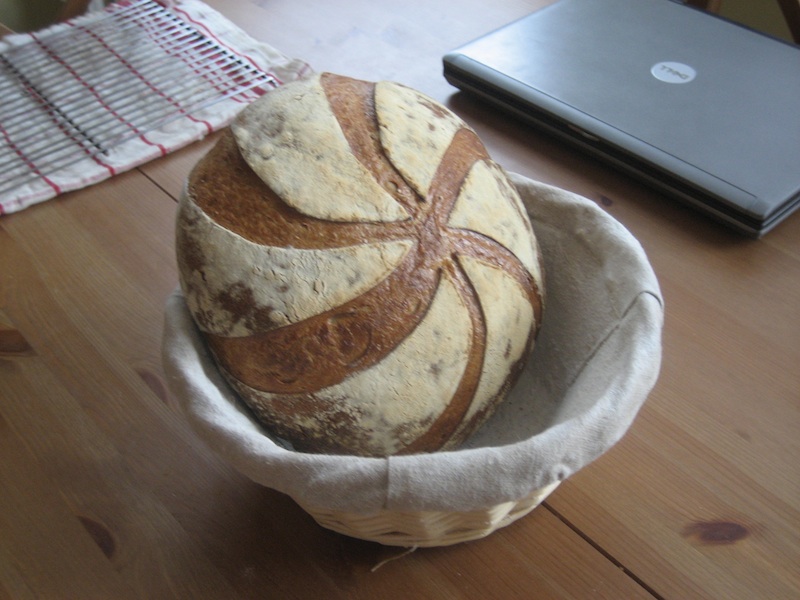 baguette: I love you, I hate you

I'll confess, I am a 'glory poster', as such, I only post bread on my blog when I am reasonably satisfied with the result. That being said, last week I made a batch of baguettes using Hammelmans poolish recipe, suffice it to say, the final bread looked so amateurish that you would think I had never touched flour and yeast before. Sadly, this is an all to common event when I make baguettes. It is the only type of bread in my common repertoire that I can't get some level of consistency with. With no false modesty, I can routinely produce a pretty darn good looking sourdough batard, or nicely scored boule. Yet the baguette for me is an ever elusive quest for perfection.
Dismayed by my results last week, and ever a glutton for punishment, I tried the Hammelman baguettes again last night. The results were a million miles away from last week! No blow outs, nice opening of the cuts, retention of a uniform diameter the length of the loaf... I don't get it! I swear I did everything the same.
Anyway, that's my story for today, I just wanted to savor this moment, because I probably have a month of blow outs and non-opening ears before I see a decent baguette again. 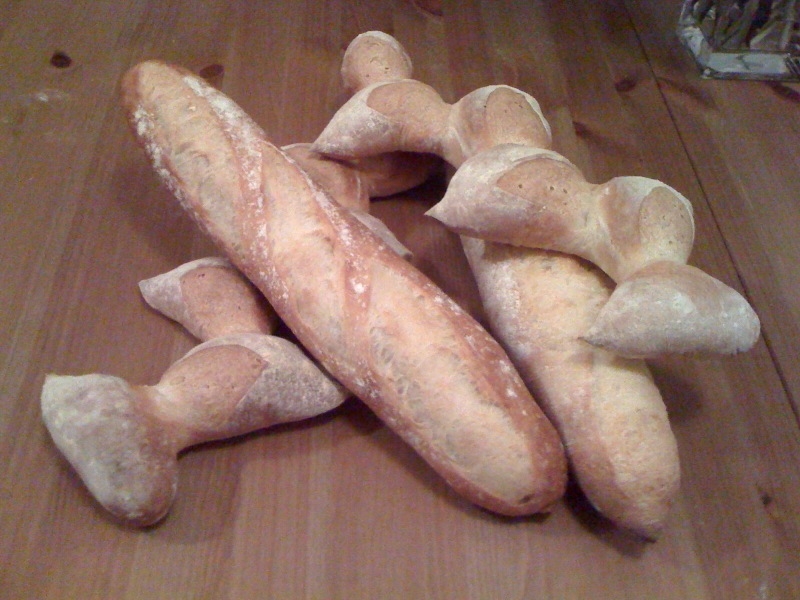 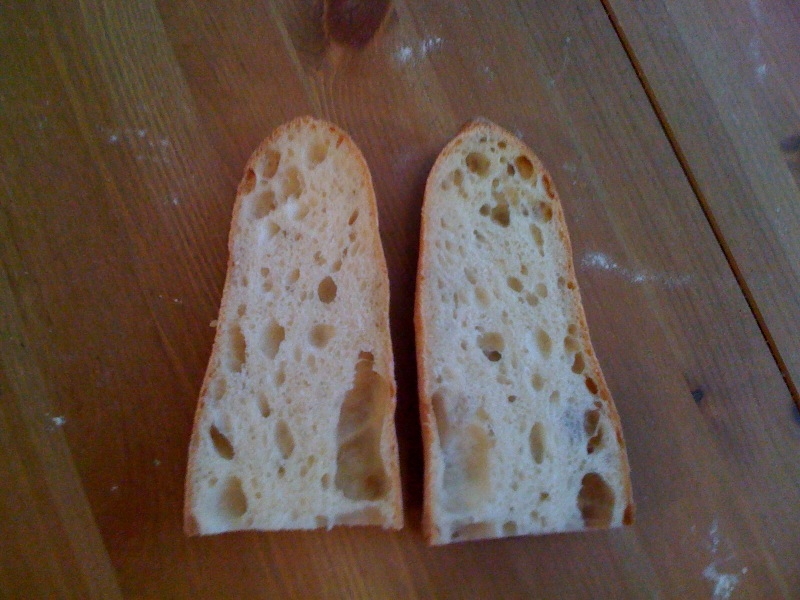 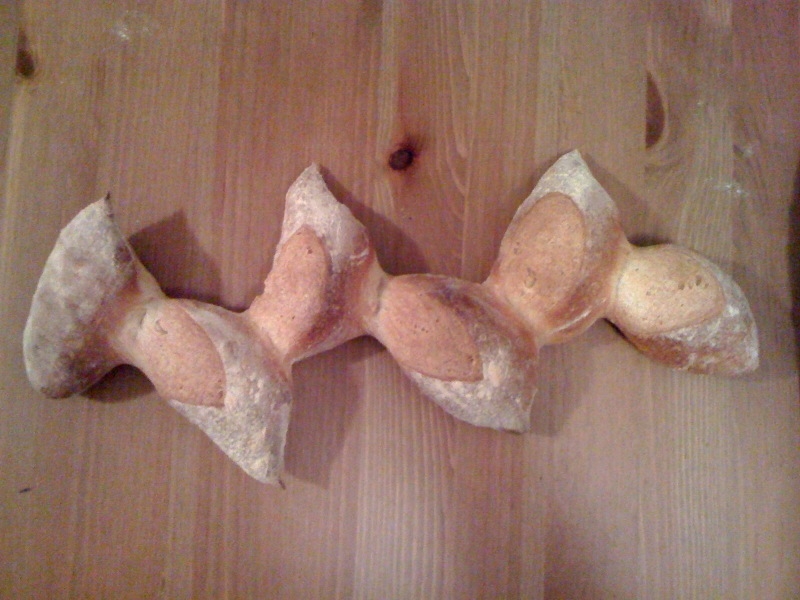 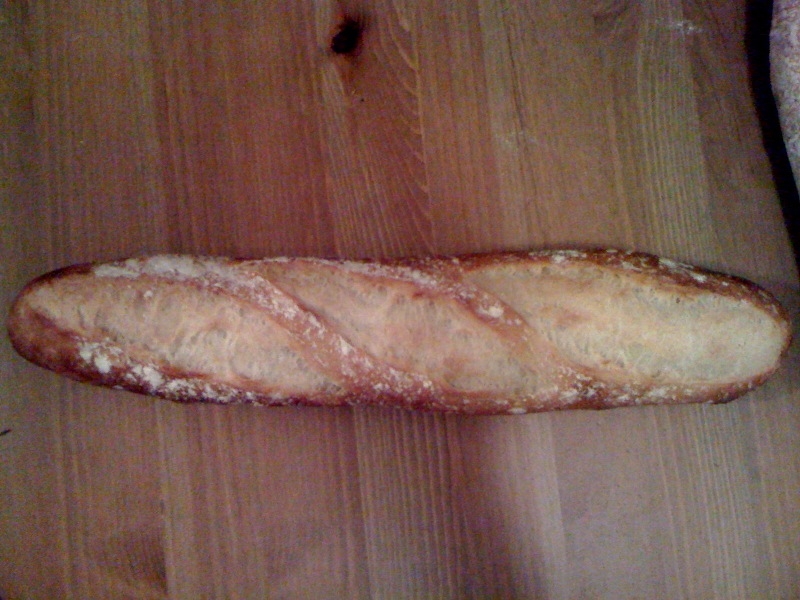 Last night I made the San Fransisco sourdough from 'Advanced bread and pastry' by michael Saus. Though this is a great recipe, the major point with this bread was the steaming technique I tried out. I have tried countless ways to efficiently steam my oven, including a moderately dangerous, self-invented water injection system... needless to say, results were not incredible, and most definately not worth the third degree burns.

Since then I have been using a steam pan in the base of the oven, placed there a couple of minutes prior to loading the bread. Unfortunately this is not the most efficient method, since my oven has numerous vents which allow most of the steam to escape.

I had read numerous times on TFL that a bowl could be used to cover the bread, utilising the moisture held within the bread to generate steam... so I decided to give it a try. I placed the bowl over the bread for the first 20 min of the bake, and then removed, I was thrilled with the results. The crust sang loudly fresh from the oven, and this is the first time that I have ever managed to maintain the little 'bridge' between the two ears, when scoring a batard with 2 slashes.

The bowl I used was an enormous metal bowl, bought from Ikea a few months ago, I forget the price, but it was certainly under $10.

A word of advice: when lifting the bowl after the 20 min, use something like a peel to lift the edge of the bowl to allow the steam to vent... I underestimated the amount of steam this technique generates and lifted the bowl with a tea towel... much to the displeasure of my hands. 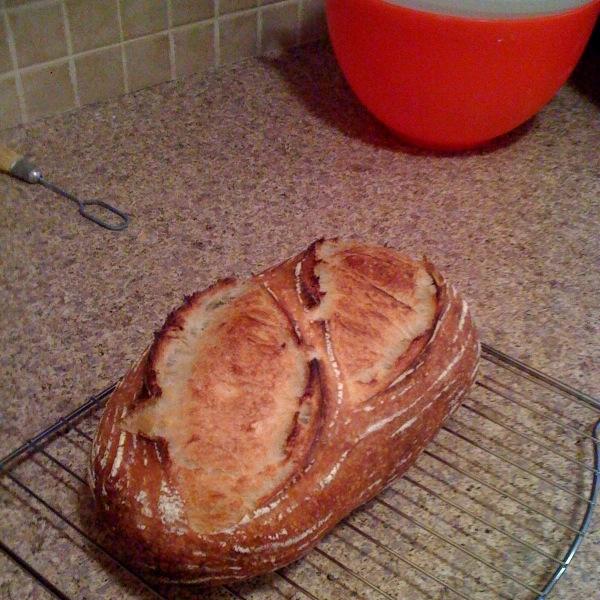 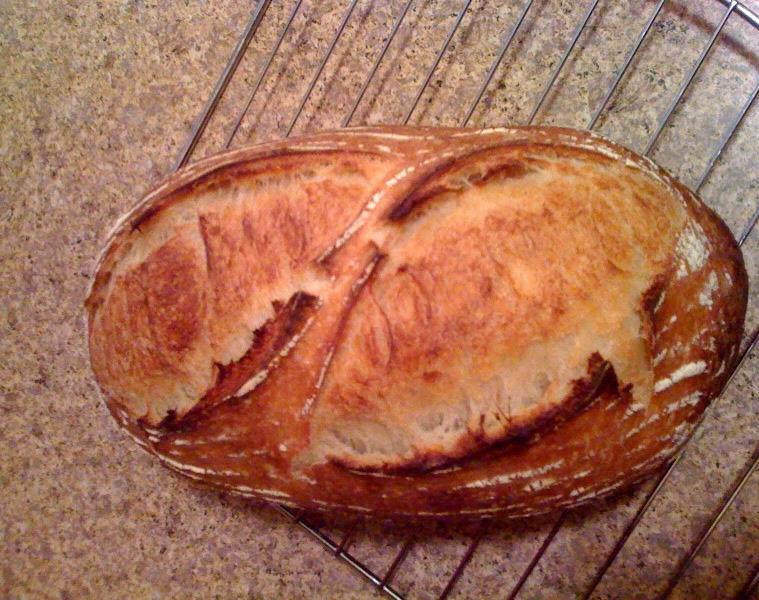 As promised, a crumb picture! I wanted to wait until the loaf cooled, so I sliced into as soon as I got home from work... 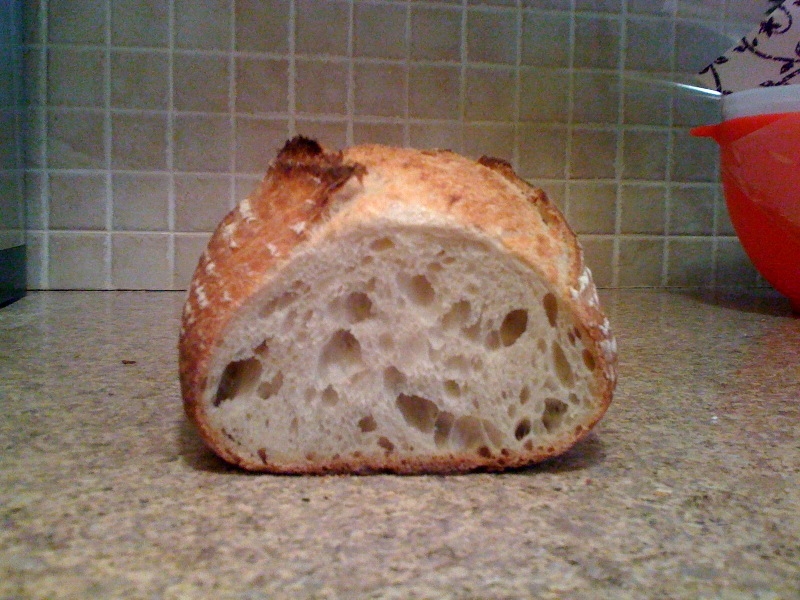 I was entirely inspired by Shiao-Pings recent blog entry entitled 'Sourdough Down Under'. The part that really grabbed my attention was the inclusion of Vegemite in the dough. As an English boy I have a love affair with vegemite's cousin from the northern hemisphere: marmite.

I have often spread marmite lovingly across my yeasty creations, yet had never considered incorporating it into a dough!

Long story short I simply added  it into my favourite sourdough recipe (pain au levain from "Bread"). I removed 40g of water and replaced with marmite. The result was fantastic. I can honestly say that this is the best my apartment has ever smelled! The taste of marmite is present throughout the bread, but particularly strong in the crust... so good! 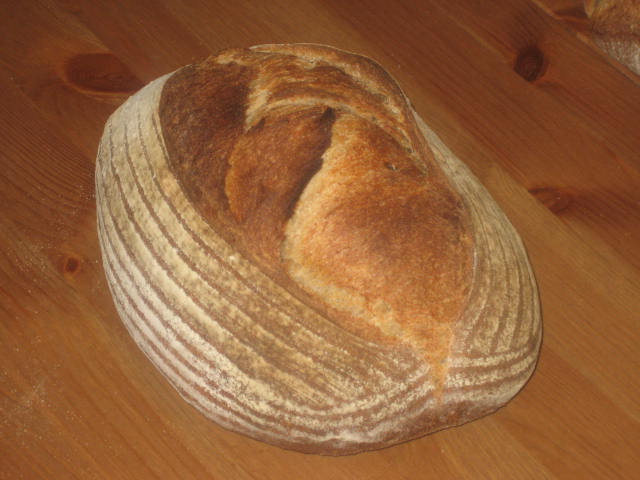 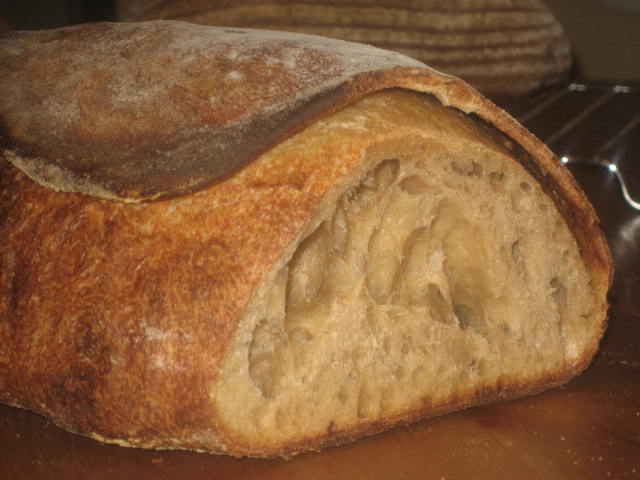 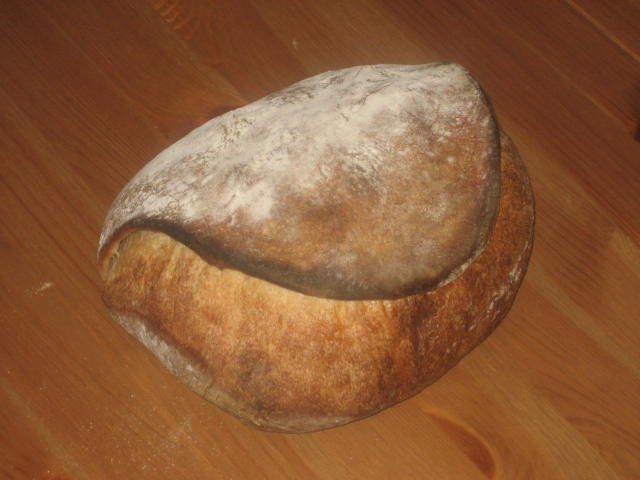 I attempted David's sourdough adaptation of the anis bouabsa baguette... 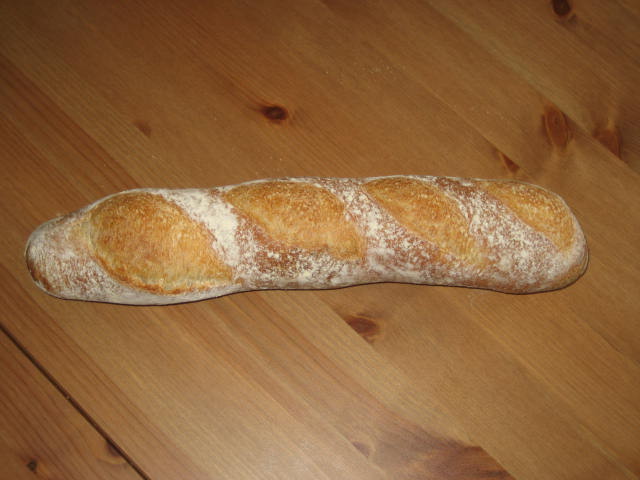 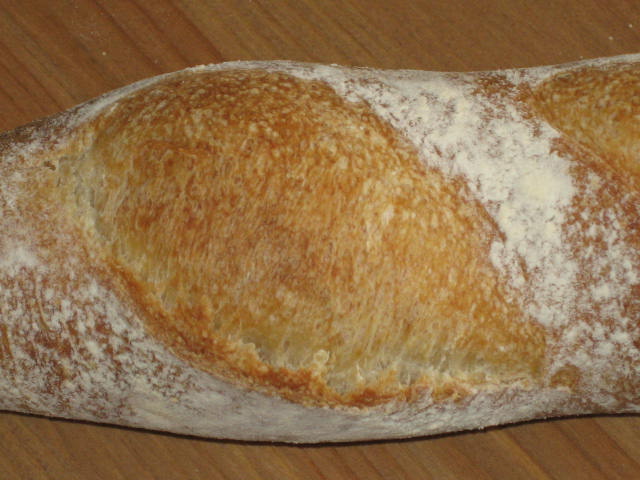 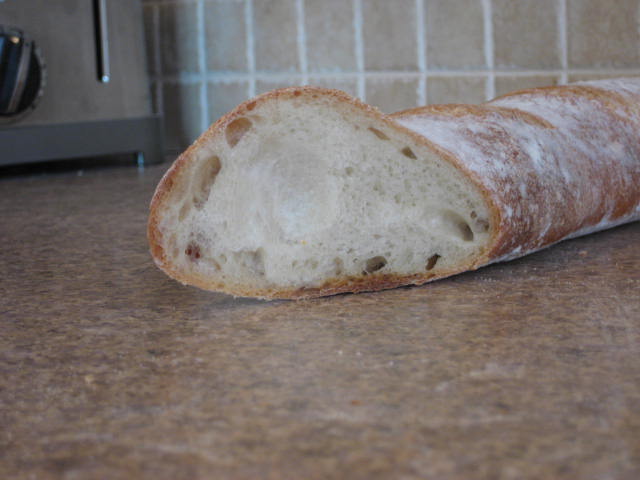 The crumb was beautifully soft, and this was by far the crustiest baguette I have ever made. The dough is a little hard to work with due to the high hydration, and scoring is particularly challenging! It was well worth it though, and I will definately be making these again!

I have made soft pretzels in the past, and have always enjoyed them, however I have always wanted to make a sourdough version. After much internet research, I did not come across any recipes that called out to me, so I decided to do my own. I adapted a Bertinet recipe, simply replacing fermented white dough in the recipe with an equal quantity of firm sourdough starter. I also retarded the dough in the fridge over night... though this was more to do with the fact that I wanted to bake them fresh the next morning rather than anything else. 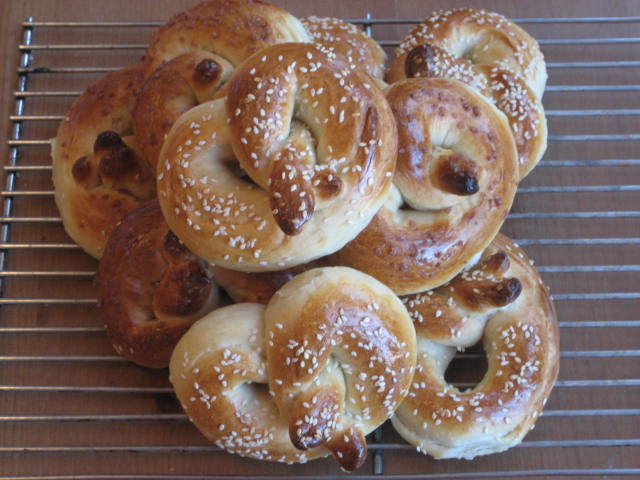 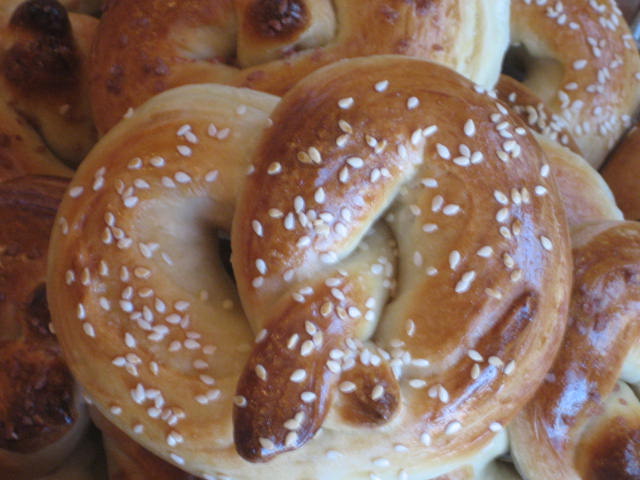 All in all I was really pleased with the result. The inside was very soft and authentic. I didn't bother with either a lye bath, or boiling the pretzels prior to baking. I plan to try boiling the next time I make these, but the lye bath seems a little to much trouble.