Well, this is actually the Chocolate Cinnamon Babka recipe from Peter Reinhart's Artisan Breads Every Day. I followed the recipe to a T except I substituted the chocolate for dark brown sugar, as per the request from my girlfriend, who barely ate any after it was done, haha.

I really like how it came out and I love the look. A loaf doesn't get any cooler looking than this and you can't go wrong with a rich, sweet, cinnamony, streusel topped bread. I gave my parents half the loaf and I pretty much ate the rest by myself over two days, my girlfriend only had a taste and acknowledged it was fantastic, she considers herself a expert. She had to look good in a bikini the following week so she said "I should stop making bread!".

This is the first bread I made out of this book, I have made many from PR's other books. I have my eye on taking a whirl at the croissant recipe in this book but I don't know when I will get to that. This was easy, fast, and fun to make and I will definitely be making it again, next time with the chocolate. It is a cool bread to bring to a dinner party for desert, in my opinion. 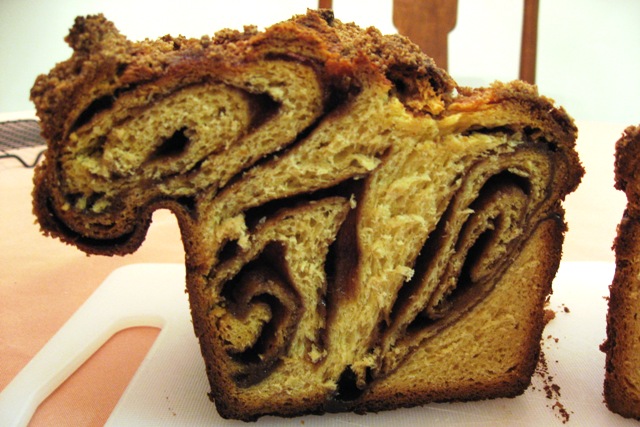 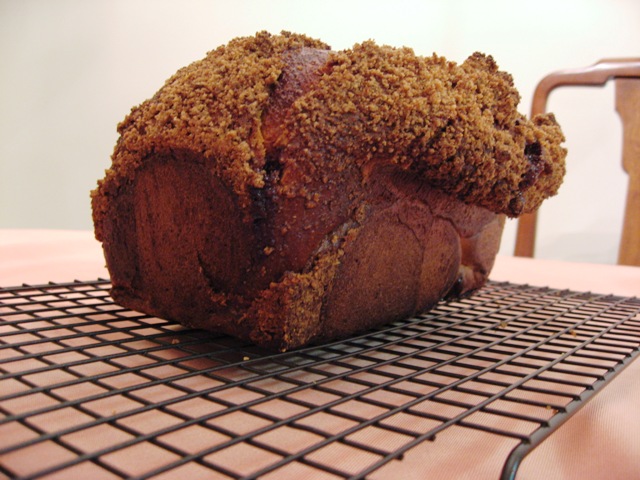 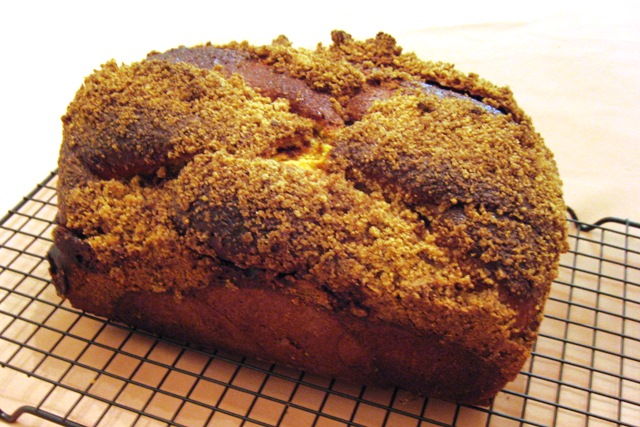 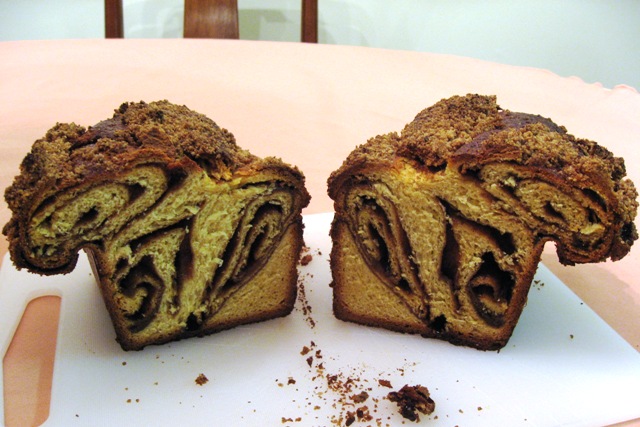 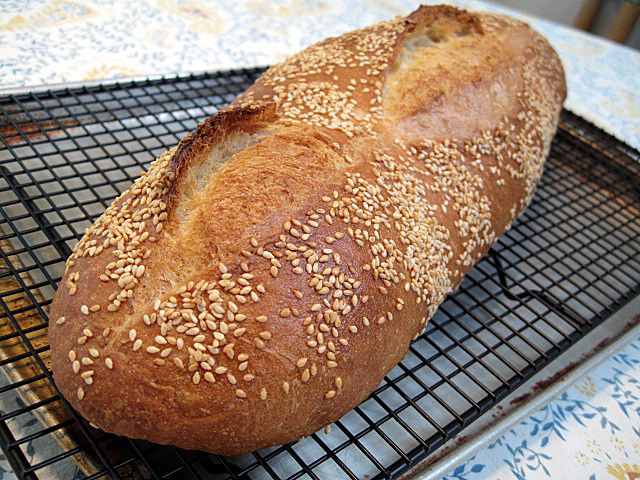 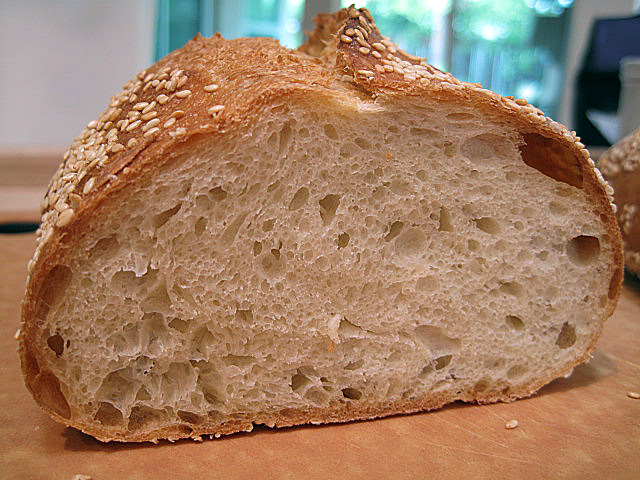 The formula and procedures I used are here: Tom Cat's Semolina Filone (from Glezer's Artisan Breads)

So after much discussion on these boards I finally decided to make this bread myself to see what all of the fuss was about. I can't believe I waited so long...This is absolutly one of the most delicous breads that I have ever tasted. I did make a few adjustments to the formula based soley on what I had available to work with (noted in formula below), but I tried to recreate the formula as close to the original as possible to get a sense of the bread in it's purest form. I also recalculated his formula so that I would end up with approx. 1200g of dough, which is the appropriate size to fit on my stone.

2. Mixing-As per the instructions in the book all of the ingredients are placed into a mixer and mixed on low speed for a few minutes to hydrate the flour. I found that I needed to add about 2 Tbsp more water. I suspect that the bulger wheat in the soaker absorbed more water than the rye chops would have. When the dough begins to come together increase speed to medium and mix until moderate gluten development is reached. Seeing as I didn't have any hi-gluten flour I mixed a little more thouroughly then I would have otherwise. On speed four in my kitchenaid mixer I mixed for 8 minutes, and I achieved a fairly high level of develpment.

5. Relax- shape the dough into loose boules, and allow to bench rest for approx. 20 minutes to allow for easier shaping.

6. Shape- shape the dough as desired and place between folds of bakers linen or in prepared bannetons. Round or ovals are what Hamelman suggests.

8. Bake- 30-35 minutes for 600g. batards 460 deg F. on preheated stone with steam for the first half of the bake. Turn the oven off and prop open the door and allow bread to dry out for an additional 10 minutes before removing from the oven.

9.Cool- allow the finished bread to cool for at least 3 hours before cutting.

The crumb on this bread was unlike anything I have ever made before, it is incredibly soft, and creamy on the tongue. The crust was lightly crisp, and not as thick as I would have expected given the overnight retarding. I would definetly make sure this bread is cooked long enough, and hot enough as it has a good deal of water from the soaker, and it needs a thourough bake to fully dry out.

Dsnyder once refered to this bread as a "flavor bomb" and I would enthusiasticly agree with that assessment. It has wonderful tart notes from the levain, and a lovely complexity from the soaked grains. I hope you all get the chance to make this bread sometime to fully experience how delicious it is. 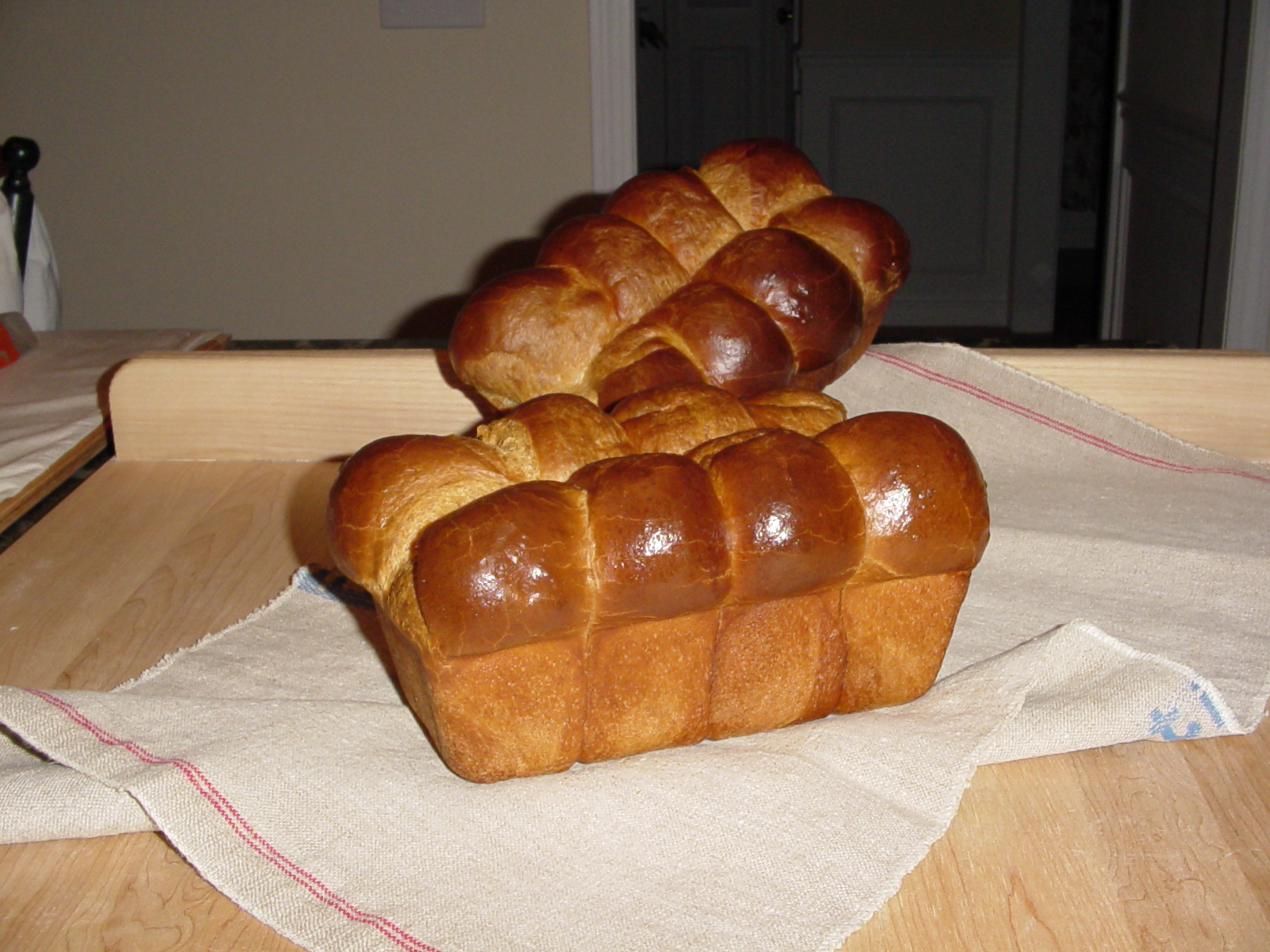 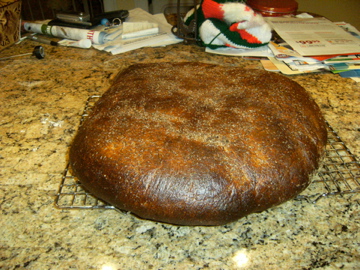 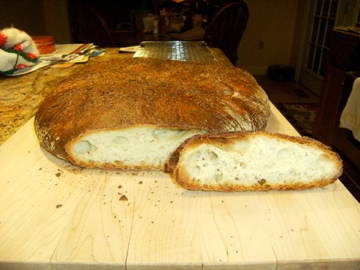 This recipe is listed in baker's yield.  You can increase the recipe to however large you want.  I did include the measurement in grams for 4 large ciabatta. This recipe will have the charactic large holes & heavy flour top that ciabatta is known for.

This is the traditional, true artisan bread, so no mixer needed!  All you need is a large mixing bowl, pastic bow scraper, and a table cloth or cloth napki. 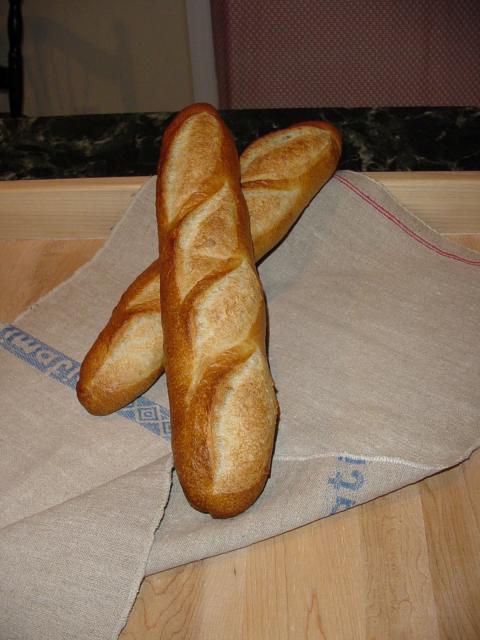 Hi!  I just got the book Artisan Breads in Five Minutes a Day by Jeff Hertzberg and Zoe Francois, but when I got part way through the book I discovered that a page was ripped in half.  I was wondering if anyone else has this book and would be willing to send me the page 131.  It is the last directions for the Montreal Bagels recipe.  I tried going back to the store and told them about it, but they said that they couldn't do anything about it.  That is the only page missing and would just tape in the directions if I can get them.

Thanks so much in advance.

Ok, this is bed rock ignorant but here goes: artisan baking is all about the details and I have not figured out about the cooling part.

Peter Reinhart says he enjoys his bread warm but that his Parisian baker friend says the bread must cool 2-3 days for it to mature.  Others say that as well.  Who is right?

And when cooling is it necessary to cover it with cloth and if so why?

I mixed up the artisan bread master recipe as found online at several news sites. I knew the dough was supposed to be really wet, so I didn't pay much attention. I let it rest 4 hours, then stuck it in the refrigerator. Brought it out to make the next day (that's when this pic is).

I shaped it into a boule (ball) on a very floured cutting board, let it sit out an hour, preheated the oven, poured in the water and slid my bread onto the back of a pizza-type pan (actually came with my microwave oven.

I'd forgotten to cut the X in it, but it formed a perfect one, anyway, as it rose and tore. The only part of the form I thought was strange was that it mostly rose straight up in the middle - it rose well but was more like a volcano than a half ball, for example. Had to leave it in the oven over an hour to get any brown.

After 30 minutes, the X it split itself was obvious.

Eating-wise, it came out mostly amazing - very crisp crust - but a gooey middle even though the bottom was blackened.

I later found out I should have been using the top and bottom heating elements. The dough didn't rise much pre-oven, but had incredible oven spring (isn't that what it's called?) - I was afraid it would hit the top of the oven! The crumb looked good, but like I said was too gooey. 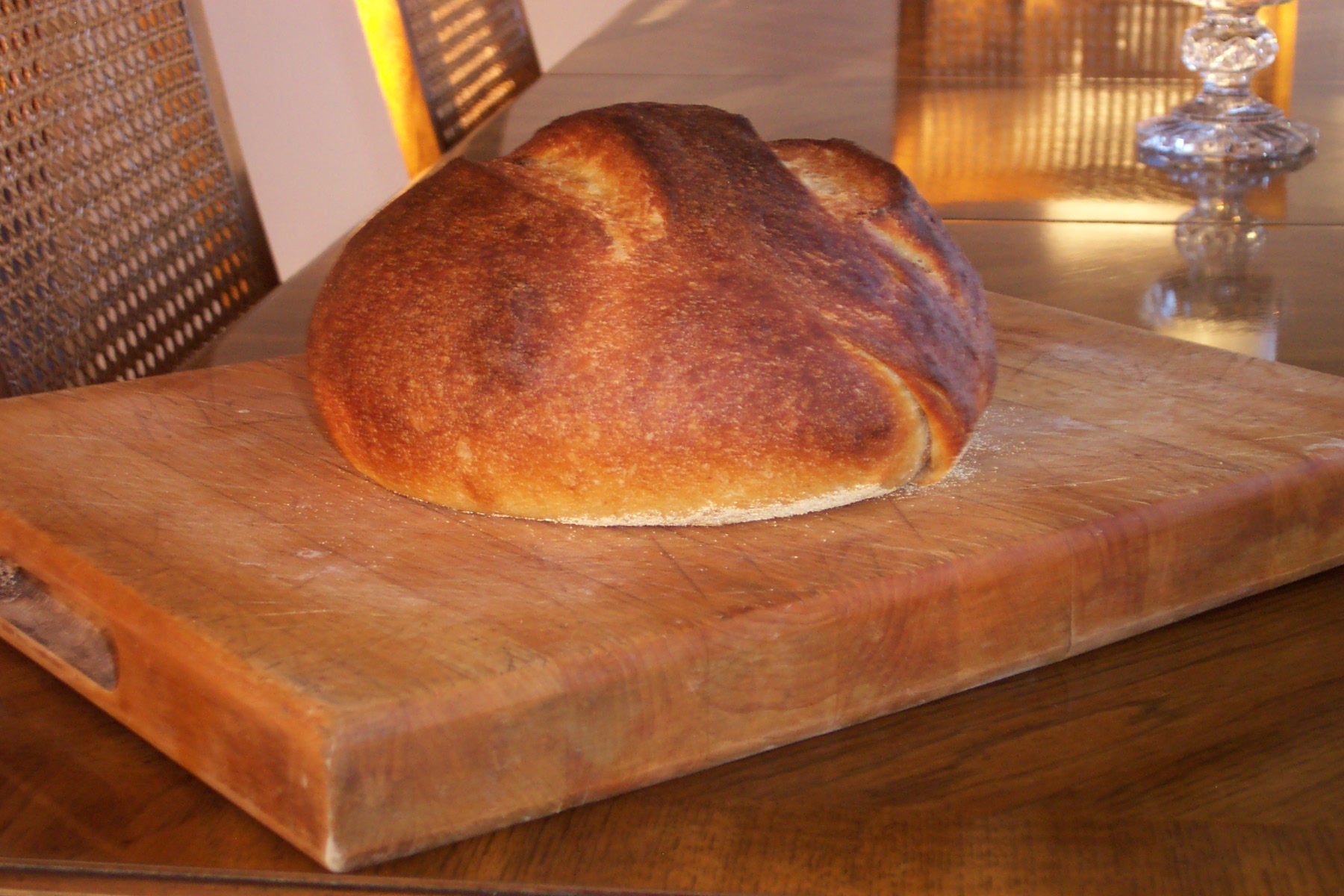 I am currently enrolled in college for Baking and Pastry Arts in Ontario, Canada and I am very interested in furthering my knowledge in the bread field, specifically Artisan bread baking. However, I am unsure as to where to turn next. After I receive my degree from college I do not know of any place to continue learning about this field. How did you start? Any advice and tips would be greatly appreciated.  Thank you