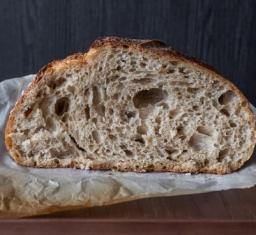 Boy howdy, did I just have a horrible experience with all-purpose flour. I'm not sure I just got a bad sack or if the flour was simply wrong for bread, or if I should have done something completely different.

The grocery where I made my last shopping run did not carry King Arthur bread flour, my default choice, so I picked up 5-lbs of White Lily AP. Tried to use it with Floyd's daily-bread recipe and it was a disaster. The poolish never developed more than teensy little air bubbles, and the dough absolutely refused to rise more than a little bit, even after 24 hours and a number of folds. The dough ended up as too stiff and too sticky at the same time, if you can picture that.

Ok my first attempt at a marbled rye sourdough was an awful mess. I think I need to add more starter next time as it was so sour the whole kitchen stunk, the kids stayed away from it. Good news though, the sheep loved it (I feed all leftover rock hard bread to the sheep)

I also used blackstrap molasses to colour the rye flour but next time I am going to double sift my dark rye so it will be lighter and maybe shift to caramel to colour the dark dough.

No pictures this time.

Question #1: Please clarify for me what is meant when Julia Childs in her baking video says that it is necessary to feed the yeast with salt and sugar at the very beginning of the process.  However, Rose Beranbaum in her Bread Bible on pg. 45 says that "salt can kill the yeast if it comes in direct contact with it."  Question #2: Why is it that when after the first proofing I go to knead the dough and rather than being elastic it bounces back and won't allow me to knead it?  It is hard for me to keep my kitchen above 70 degree

Just thought I'd share this since we often only talk about our successes.  I baked this bread last week, and froze the extra loaves. Last night we defrosted this loaf for dinner--I was admiring the nice crumb, and then a few slices in:

Whoops! I guess I slacked off a little on the shaping. Still tastes good though.....

Any ideas where I can purchase no more than a pound of rye chops?

While most of the bread world has been going "no knead" I have been going no preheat.  I read about this method a year or so ago.  As part of my newyears resoulution to try new methods I have been using it.  The method consists of placing 1/3 to 1/2 cup of water on the oven floor. Put bread on a sheet pan and slash as usual.  I place it in the oven in the middle rack, shut the door and turn oven on to 525.  The oven window will be covered with steam for the first 10 min or so.  After 15 min I lower the heat to 440 or so for the rest of the baking time.  The baking time is just slightly longer.  I have noticed no great difference in my breads baked on a preheated stone or on a sheet pan minus the stone and preheat.  I will say that sometimes the bottom gets a little darker than when on the stone.  What I like most about this is you can wait until the very last minute and throw in your bread and not have to have to guess when to turn on the oven to preheat.  It also saves on electricity and to some degree heat in the kitchen.  Give this a whirl, I think you will be pleasantly suprised.

Since this is only the second time that I have added something to this site, I may not be adding this note to the right place.  If not, hopefully I will find a better place next time.  First I love this website.  I am an artisan bread hobbiest, have been playing around with sourdoughs for quite a while, and find the information here both interesting and helpful.

I don't remember where I first heard of the Steam Baker.

I bought one and am delighted!

It consists of a large 3/4" baking stone, a stainless steel cover, and a steam generator.

It replaces the need for the spritzing and spraying I have been doing since I began baking artisan breads.

To use it, you preheat the stone to 400 F. Place the bread on the stone, place the cover over the loaf/loaves, then spray steam thru a small hole in the cover for 10-15 seconds. Remove the lid after 10 minutes and continue the baking process.

I found it at www.steambreadmaker.com.

After a full 3x feeding of Francesca Fiore (my hydrated sourdough starter) for a day of baking last weekend, I found myself with an extra blob of her that I didn't want to just throw out. Flipping through Nancy Silverton's Breads from the La Brea Bakery

, I saw the English Muffins recipe and was reminded of Sunday mornings when I was kid, waking up early with my Dad and munching on Thomas' English Muffins slathered with butter and strawberry jam. I decided to give them a shot.

I'll start with her recipe:

Here are the ingredients that I used based on what I had on hand.

I made the sponge on a Sunday, but did not have the time to actually make them that night so I put it immediately into the fridge to ferment overnight. The next day, I removed it and it was nice and bubbly with a good odor. I assembled the dough, let it ferment at room temperature for about an hour before I realized I wouldn't have time to bake that evening either. Into the fridge it went and the next day I set out to bake it. I let it come back to room temperature and then put in on a cutting board dusted with cake flour to rest, dusting the top with semolina flour for good measure. At this point, the recipe calls for 15 muffin rings to be buttered and placed on a parchment-lined baking sheet, muffin rings are not in my baking arsenal (butter is). Instead of emptying out cans of tuna on both ends and washing them (as Silverton suggests), I opt for the less fishy route and construct my own rings out of parchment paper. I thought this was pretty smart, since I didn't have to waste the butter to coat them. Once the muffins were done, I could just peel off the paper and enjoy the deliciousness of fresh English muffins. I placed the rings on baking sheets dusted generously with semolina flour and then filled with the dough. Here's where my paper rings idea started to collapse--literally. Although they were having trouble containing the dough, they did a good job of maintaining the basic muffin shape and I was happy with that.

I wish I had captured the moment when one of my cats jumped on the pan of resting muffins landing a foot in at least two of them and then proceeding to track dough across the entire kitchen. Luckily, I caught him before he hit the rugs.

After an hour of rest, I dusted the muffins with semolina flour and put them into a preheated 400 degree oven and baked for 20 minutes. I then removed the pans, rotating them and flipping the muffins over. I was a bit discouraged at the look of the muffins after the first 20 minutes; they were turning out like giant biscuits. But sally forth, home baker!

After another 20 minutes of baking, I pulled them out of the oven set them out to cool. They were definitely looking more like English muffins and less like biscuits. About an hour later, I removed the parchment paper rings and laid them out for a photo shoot. Time to pull apart and taste! I'm a bit ashamed here. I couldn't even wait to take the picture before biting into one. They were/are pretty tasty little devils, but almost nothing like a Thomas' muffin. To my palate, much better tasting. The texture of the crumb was a little gummy, however, and I'm guessing it was because I used a bit too much rye flour in the dough and perhaps because of the extra time I gave the dough to ferment. If I had known I wasn't going to bake them the day I made the dough, I would have left out most if not all of the instant yeast. My substitution of the wheat gluten for the wheat bran was a mistake as well. In hindsight, I should have used some oats or millet. The agave nectar imparts an interesting sweetness to the muffins, but I could have cut it down to 2.5 tbs for a better flavor. The texture with the seeds is great. I'm definitely going to try these again with some small changes.

I have finished reading the Reinhold (BBA)and Beranbaum books on bread and would like to know what the resident pros such as: FloydM, SourdoLady, Mountaindog, Jim, Jeffrey, et. al. actually normally do when it comes to retardation and misting.