My favorite bread changes as often as a teenager changes boyfriends. Here's this week's:

Dan Lepard's Walnut bread. It has yeast and leaven both; what makes it wonderful is the paste of

ground walnuts, honey and butter that infuses the dough with walnut flavor and a hint of purple. 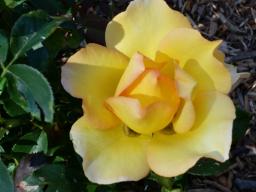 After seeing the beautiful breads Meedo and Zainaba have made, I'd like to try them myself.   Does anyone have suggestions as to where I might be able to get rose water, especially in the Midwest?

I've thought about making my own, but I don't have roses, and have read that using store bought roses may not be safe because of pesticides.

Any ideas will be greatly appreciated!

After years of making baguettes with almost every type of AP unbleached white flour commercially available, I decided that bringing type 55 flour to the US would be the only way to solve the famed baguette debate. I researched flour suppliers and found one from Turkey. If you have ever been to Turkey, you know how good their bread is. In fact, their standard loaf is much like the bâtard and many mills in Turkey supply flour to France, including the one I have sourced for my flour.

Feel free to contact me to see how you can get your hands on some type 55 flour: inquiries@filbertfood.com

Hello Fraternity of the Floured Counter

Looking for a dairy free recipe for homemade grissini - preferablly wholegrain.  Made in the true artisan way - each one hand formed into a long thin stick.  I want to server these standing upright in a tall glass as part of a cheese and antipasta spread I'm doing for Easter?  Can anyone help?

This is my first attempt at sourdough rye although I have been experimenting with sourdough since Sept and have baked some rye bread using yeast.

I started the rye chef on Monday using 3 oz. of rye, 4 oz. of water and a pinch of starter that was dried and frozen in Oct. 06.  The rye was organic that was grown in my state, Maine.  The grain was stone ground and felt quite silky and its aroma was really pungent.  It was kind of expensive even for grain that’s organic but Maine isn’t really a grain producing kind of state.

What activity!  The first day the chef produced a lot of bubbles and increased in volume.  I was surprised and really didn’t expect that much activity. On Tuesday and Wed I continued the feedings of the same ratio on Monday and the chef doubled in volume on both days.  The chef had a very strong beery smell that filled the room when I opened the container. Thursday I put the chef in the refrigerator to avoid having to feed it again and brought it back out early Friday morning giving it enough time to warm up for a final feeding at noon. The final length of time from the last feeding until I built the starter is 8 hours to ensure enough activity for a good starter.  At 9p Friday I mixed the starter planning on 8 to 10 hours of fermentation and final dough making at 5am.

For the starter I mixed 9 oz. of chef, 5 oz. of rye and 4 oz. of water.  After mixing well I sealed the container and put it on the top shelf of the pantry to maintain the temp at around 74 degrees

Add the starter to the water and stir until bubbly.  Add rye and mix completely, then fold in whole wheat flour and caraway seeds. Once mixed add enough  20% bran wheat flour until difficult to mix.  Turn out to well floured board and let rest for 10 min. then kneed.

Add salt while kneading in several small amounts. Kneed for approximately 15 to 17 minutes or when a little dough pulled from the mass springs back quickly. Shape the dough into a tightly shaped ball and return to the cleaned and oiled mixing bowl, cover bowl with towel or plastic wrap and let ferment for 2 ½ to 3 hours.

Divide the dough and shape:

One hour before baking Preheat oven to 450 degrees, with hearth stones as close to center as possible.  Gently move loaves or rounds to floured board or peel and slash tops.  Transfer loaves to oven and mist interior repeating mist again in three minutes.  Bake loaves at 450 degrees for 20 minutes reduce heat to 375 and bake for another 20 minutes.

This past Sunday I made enough dough to make four loaves of  bread using Daniel Leader recipe for San Francisco Sour dough.

This first photo is one of the two loaves I baked tonight, the dough having been in the refrigerator for two days.  The crumb was open and the sourness buildup wasn’t significant.  Lousy photo but the coloration was browned well, I  lightly sprayed the loaf with water then slashed, there was some tearing on these loaves from oven spring as well.

On the Sunday batch I used a glaze of one whole egg with a little water and a dash of salt. The coloration was nice and the crust was chewy instead of crisp which seemed to bring out more flavor. The glaze gave a nice texture and something I would like to experiment more with, maybe using just egg yoke. Even though the wash moistened the crust and I slashed the loaf.  It expanded out the slashes and tore along the side.

I thought I would share my results trying mountaindog's version of Country French. I didn't have exactly the right malt as called for in the formula so I substituted dry powder and a little raw sugar for the sweetener. I didn't get the airy crumb through out but there was nice activity in my wet starter which I am nursing back to a healthier condition. It's hard to see in the image but the crust is very thin and nice and crunchy. My family doesn't care for a thick chewy crust so I was going for a baguette style crust. I baked this in my new Steam Maker Bread Baker unit (background) with 15 seconds of hot steam injected, covered for 10 minutes then 20 more minutes of dry heat. The crust is incredible! Thanks mountaindog for the inspiration. I think this will be my new daily bread. The depth of flavor is very nice. I have another batch behind this one for tomorrow that I swapped some of the AP flour for King Arthur 7 grain. The combination of caramelized grains gives this a great aroma and chew.

I have a friend who needs a lot of par baked bread on hand but I have been having difficulty getting the bread out at 90% baked, usually 180 F. My thermometer takes about 20 seconds or longer to show the temperature and with differing temperatures in the kitchens it's all across the scale unfortunately. 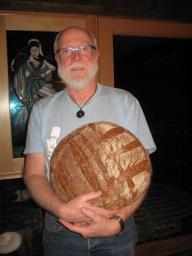 Does anyone know where to obtain high extraction wheat flour? I've made my own from flour I've milled myself, and it's too much work with the rudimentary tools I have. So far, Google hasn't found me a source. Another question is Does anyone know of a bolting machine or other sifting device for making high extraction flour that is appropriate for home use?

Yet another question is Does adding white flour to whole wheat produce a flour close enough to high extraction flour to make the search for the real thing unnecessary?