Pumpernickel Bread from George Greenstein's "Secrets of a Jewish Baker"

Pumpernickel Bread from George Greenstein's "Secrets of a Jewish Baker"

George Greenstein's “Secrets of a Jewish Baker” is a wonderful source for traditional New York-style Jewish baked goods. It has been criticized for giving ingredients in volume measurements only, though. I have previously provided Greenstein's formula for Jewish Sour Rye with ingredient weights, but I realized today that I had never done this for another of my favorite Greenstein breads – Pumpernickel. So, here is Greenstein's pumpernickel formula converted to weights.

This is Jewish pumpernickel. It is moist and chewy. It is not the dry, dense German-style pumpernickel. I make it generally as long loaves, as pictured. However, you can also make it as round loaves, in which case you should "dock" the loaves by making 6-10 holes in the top with a skewer or ice pick, rather than scoring them across with 3 slashes. You can also make this bread in loaf pans, in which case I would score them with a single slash along the center of the long axis. 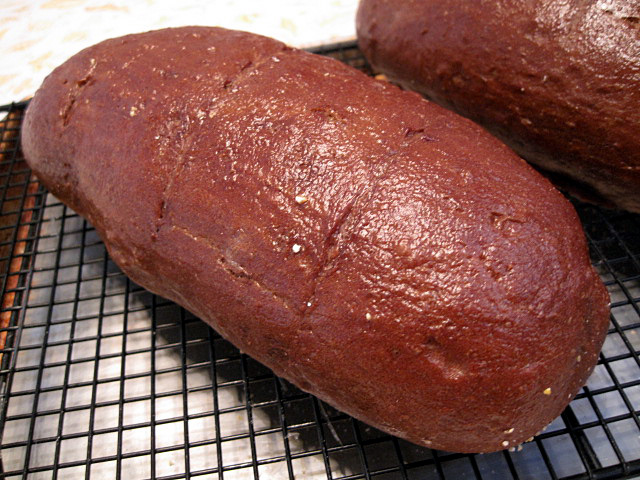 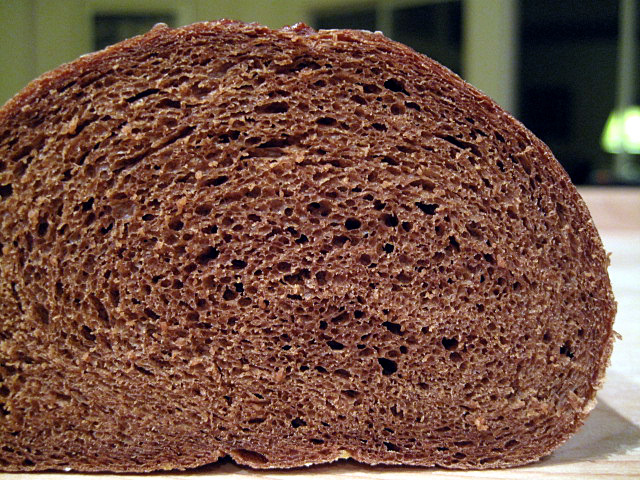 The recipe that follows is taken from Secrets of a Jewish Baker, by George Greenstein. The ingredient amounts are both those Greenstein specifies and the ingredient weights I actually used. The procedures are adapted from Greenstein's.

1. Rye sour: This is a rye sourdough starter. You can make it from scratch. You also can easily convert a wheat flour sourdough starter to a rye sour by feeding a small amount of your existing starter with rye flour and refreshing it a couple of times.

2. Altus: This is “old” rye bread cut into small pieces, soaked in water until saturated and wrung out. It was originally a way for bakers to re-use bread they hadn’t sold. "Waste not. Want not." However, it does make for a more tender and flavorful bread and has become traditional. It is optional. I keep hunks of leftover rye bread in a plastic bag in my freezer to use as altus.

3. Pumpernickel color: This is really optional but is necessary to give the "black" color expected of pumpernickel. It also gives the bread a subtle bitter undertone without which it just doesn't taste "right." You can use 1 tablespoon of powdered caramel color, instant espresso cof

4. Pumpernickel flour: This is whole grain, coarsely ground rye flour. You can use dark rye flour, but it won’t be quite the same. I get pumpernickel flour from King Arthur’s Baker’s Catalogue. Like other whole grains, it will spoil in time. I keep it in my freezer in a 1 gallon Ziploc bag.

5. Common flour: This is also known as first clear flour. Its definition gets into esoteric grain milling stuff, but it is necessary for authentic Jewish rye breads, including pumpernickel. It also makes wonderful sourdough breads as a substitute for bread flour or a mix of white and whole wheat flours. I get First Clear flour from King Arthur’s Baker’s Catalogue.

6. Cornstarch solution: Mix 1 ½ tablespoons of cornstarch in 1/4 cup cold water. Pour this into 1 cup of gently boiling water in a sauce pan, whisking constantly. Boil until slightly thickened. Set aside. It can be kept refrigerated for a few days in a sealed jar or covered bowl.

7. Caraway seeds: I don’t use them in pumpernickel, myself. You can add other things to pumpernickel, though, such as flax seeds (soaked overnight), sunflower seeds, raisins, minced onion.

Mixing (by hand. See Note below for mixing with a stand mixer.)

In a large bowl, sprinkle the yeast over the warm water to soften; stir to dissolve. (If using instant yeast, mix it with the flour, don’t dissolve it. Add the water to the rye sour and mix.) Add the rye sour, altus (if desired), pumpernickel color, pumpernickel flour, 2 ½ cups of common flour, and salt. Mix thoroughly until the dough pulls away from the sides of the bowl.

Turn out the dough onto a floured work surface and knead, adding small amounts of flour as needed. Make the dough a bit stiffer than normal, since this dough softens as it is kneaded. Knead the dough until it feels smooth and silky (5-8 minutes).

Note: I mix in a KitchenAid mixer. I put all the ingredients in the bowl and, using the paddle, mix well at Speed 1. Scrape the dough off the paddle and replace it with the dough hook. Knead at Speed 2 for about 8-10 minutes. If you do not use altus, the dough should form a ball on the hook and clean the sides of the bowl. With altus, even when an additional 50 gms of flour is added, the dough does not clean the bowl. I then hand knead until the dough is smooth and silky.

Shape the dough into a ball, place in a large oiled bowl, and turn to coat. Cover and let rise until doubled in size.

Punch out all the air, cut in half and shape into rounds, and let rest for 10 minutes.

Shape into round loaves, long loaves or pan loaves. If baking free form, place the two loaves on a baking sheet sprinkled with coarse cornmeal. (Or on parchment paper if baking on a stone, which I prefer.) Cover and proof until doubled in size. (About 90 minutes, or more depending on room temperature). Brush with cornstarch solution. Score the loaves across if long dock them if round. If using caraway, sprinkle seeds on the top of the loaves.

Bake with steam in a preheated 375F oven until tapping the bottom of the loaf produces a hollow sound (30-45 minutes). The internal temperature should be at least 190F. If the crust seems soft, bake 5-10 minutes more. (The crust should be very firm when you take the loaves out of the oven. It will soften as the bread cools.)

Note: I use a pizza stone for baking free form loaves. I heat it at least 1 hour before baking. I produce steam by preheating a cast iron skillet filled with lava rocks in the oven along with the stone and, right after putting my loaves in, pouring 1 cup of boiling water into the skillet. Be careful you don’t scald yourself with the steam!

After baking, place on a rack to cool and brush again with the cornstarch solution. Let cool thoroughly before slicing and eating.

This type of pumpernickel is one of the breads we always had in the house when I was a child. I usually ate it un-toasted, spread with cream cheese. My grandmother ate it spread with sourcream. I think this pumpernickel is especially good with smoked fish or herring, and it is my favorite bread to eat with scrambled eggs.

Unfortunately, my wife isn't as fond of pumpernickel as I am, so I also made one of her favorites – the Cinnamon-Raisin-Walnut Bread from BBA. 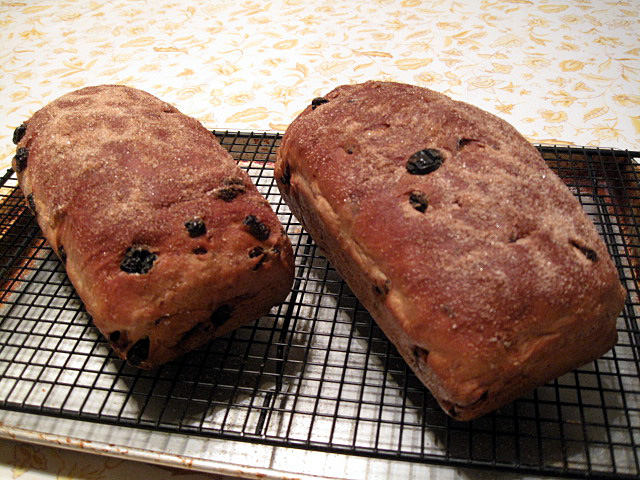 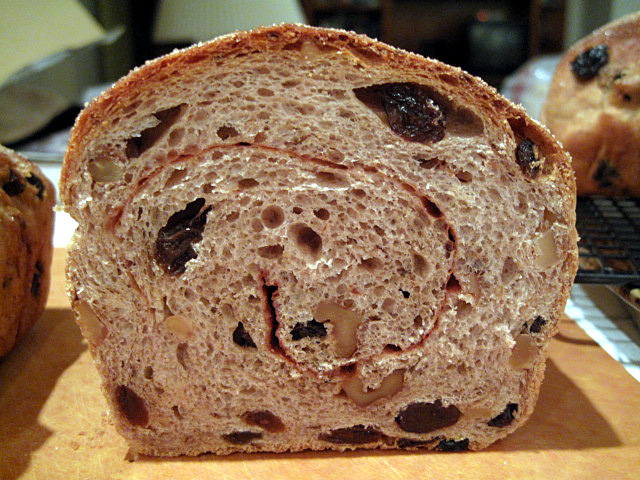 Hi David!  I've made your Jewish Sour Rye recipe with great results (although I admit I made a tweak or two because I can't help myself).  I thought I'd try this recipe. using the sour...I have some KA pumpernickel flour on the way today but I don't have caramel color so thought a couple tablespoons of molasses might do the trick.  Thoughts?

Caramel Coloring produces the black color. It gives a subtle bitter flavor. Molasses would give sweetness. I wouldn't do it. If you have some instant espresso, that would be a better alternative. There is a third option that I can't recall at the moment.

I hear what you're saying and I'm going to experiment and report back.  I'm hoping that the sour might balance the sweetness in the molasses....and that's the black strap kind I'm thinking of using...I can't help myself..I have to tinker.   The worst that can happen is I have more food for the birds!!  They love my mistakes.

I tinkered with the Jewish Rye recipe you provided and it came out as one of the best ryes I made so far but your recipe was the guide. The sour smells like a brewery and is very lively. I added in some WW and potato flour and virtually eliminated the first clear mainly because I ran out and used KA bread flour but the flavor from the sour is exactly what I wanted.  I'm searching for a specific texture and will increase both of those slightly and report on my results and the opinions of my panel of independent taste testers...LOL We certainly can't eat all the bread I produce so the panel usually does not go home empty handed.

Let us know how your tweaks work out, Wendy.

Re. Texture: If you have rye bread you can rescue from the birds, you might think about using some as "altus" in the pumpernickel. It has an effect on texture that may be similar to that of potato flour. I describe it as smooth and custardy.

many thanks for the recipe conversion and all the tips.

I'm planning on baking this this weekend but after two days of research have not been able to come up with a source of First Clear. In fact for the most part people just stare at me blankly when I ask.

First as I am probably not going to resolve this in time for this batch what is my best bet as a substitute this time around?

Next any ideas on where to source this on this side of the pond would be fantastic.

I'm sorry, but I have no idea if anything like First Clear flour is produced in the UK. It does make a subtle difference in the bread's flavor but is not critical. There are many UK members on TFL, so you might post a new topic with your question.

In the meantime, a strong bread flour would be an acceptable substitute for First Clear. I would say one with 12.5-14% protein.

Let us know how it turns out for you!

I made this the other day.  Used the rye sour, Altus and KAF flours.  I did the cornstarch solution.  Bread taste fine but the crust leaves a bitter taste

Any reason for this?  is it the cornstarch solution?

Also made Jewish rye bread from KAF recipe which came out wonderful.  but no cornstarch solution.  used same flours, and Altus, and rye sour on both breads

The bitter flavor is typical, but it should be subtle. It comes from the caramel coloring, not the cornstarch glaze. If you don't like it, skip it. It is mostly there for aesthetic reasons, I believe.

I didn't use any coloring.   hmm

Must do this again see what happens

So, I don't know. Let us know if you figure it out.

could you share the walnut bread recipe? looks so good reminds me of a walnut bread from this place in LA  jane bakery! thank youuu

You posted this request in a topic on another bread. Please repost on the topic for which you want the recipe.