I forgot to mention that I baked kaiser rolls again yesterday. They were mighty tasty, though they still don't look like professional kaiser rolls. I actually like the rough look of them though.

Anyone have any kaiser shaping tips? I tried making the poolish ciabatta from the Hamelman bread book today. I was not paying much attention when I added everything to the mixer and I must have added too much flour or too little water, so it was clear it was not going to be a ciabatta after all. So a french bread loaf it turned out to be.

One thing I did do was focus more on the scoring. I did a few things better this week: 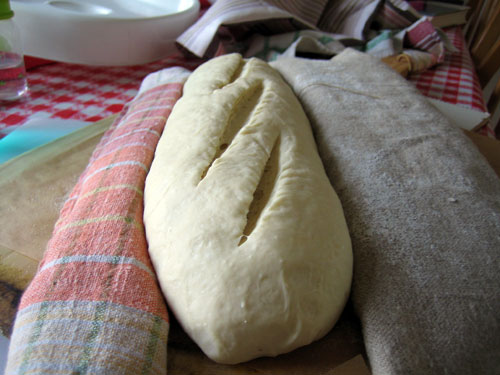 Definitely one of the nicest grins I've gotten on a loaf yet: Oh yeah, I forgot to mention that I found an iron pan at Goodwill this week. I used it to create steam and, yes, iron definitely holds its heat. The crust was very nice tonight.

I may try again Sunday.

I finally bought Jeffrey Hamelman's Bread book the other day. I baked the poolish baguettes from it today and following his instructions on mixing, shaping, scoring, and baking. It was largely successful, though I made a few mistakes.

The dough seemed pretty sticky, but Hamelman is correct that folding the dough during rising tightens things up nicely. I probably should have given it an extra fold and an additional hour to rise before shaping. Hamelman's instructions on shaping are quite good. I think I did a better than average job of shaping today.

When it came to scoring, Hamelman cautions about scoring too deeply. So, against my own better judgement, I underscored the loaves. The bread tasted great. The crust was a bit on the soft side because I added too much water to the oven, trying to create steam, and not all of it evaporated. And it is interesting to note how the top one looks quite different from the other two. I'm not certain if it is because I had a difficult time loading it into the oven and I damaged it then or if I hadn't shaped it properly. I'll just have to keep trying.

Back to work tomorrow.

During my week off I managed to bake pain de Provence, bagels, chocolate chip banana bread, kaiser rolls (recipe to come, after I try it a few more times), pain sur poolish, and an apple pie. Not bad consider everything else we did (3 days at the beach, a day hiking, lots of visits to the local playgrounds, and so on).

I'm finally pleased with the way the site (this one) is looking. It has taken me a month or two to work out most of the design kinks. It is finally getting there.

Today is my birthday, and for my birthday my friends and familiy got me baking supplies. With my new baking stone (bed bath and beyond is having a great deal on them, fyi), I went to work on some baguettes. I followed the recipe in the king arthur flour's online baking lesson found at:
http://www.kingarthurflour.com/stuff/contentmgr/files/7512947c75dd4ce76f3a611041c1fe40/miscdocs/baguette-ciabatta.pdf
They turned out excellent. This was the first time I could actually hear the bread crackling as it came from the oven. That was quite an experience. I also got a silpat mat and some new cookie sheets, so I will let you all know what I think of them when I get to work on some pumkin cookies. :-)
ps, sorry no pictures, but I don't have a digital camera. ~Erithid

I've been on vacation this week. Of course I have to be a bakery tourist. I came across Bread & Ocean in Manzanita, Oregon (see map). 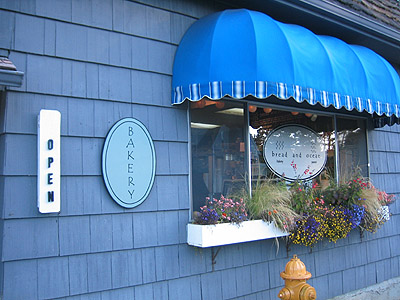 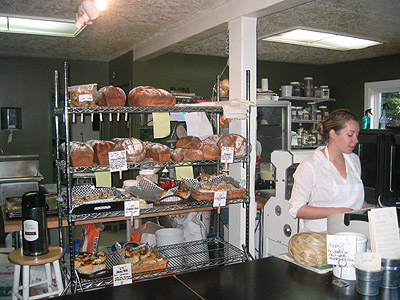 I tried one of their sweets, an almond-poppy seed bun. It was excellent.

Hello! For my first entry I will talk about a recipie inspired from a show called Yakitate Japan. Yakitate Japan, which means "freshly baked Japan" where Ja-pan is a pun on the japanese word for bread "pan", is an anime about a young boy's journey to create a bread that culturally represents Japan. It is hysterical, tounge-in-cheek, and chock full of interesting bread ideas. On one episode they discussed a recipe for microwave bread. Since I don't speak japanese or cook in metric, I devised my own recipe using the same basic concepts. It is still a work in progress, but everyone should try it. It amazed me with how well it turns out.
Microwave Bread:

Directions:
1. Add the butter to the milk and microwave until it just melts, about 30-60 secs. You want it melted, but not boiling or anything.
2. Add the yeast, sugar, salt, mix well
3. Add the flour until you get a sticky dough that you can handle.
***** Important******
Do not knead the dough, just mix it. Trust me, if you knead it it will not rise. There is a reason for this, but I forget. It has to do with the gluten formation interfering with the rise.
4. After you mix the ingrediants, cover the bowl with parchment paper and a wet towel and microwave for 30 seconds on high
5. Divide the dough into 4 pieces. Shape into balls, put on a microwave/oven safe dish (I use a plate w/ parchment paper)
6. Cover with paper and towel, let sit 10 minutes
7. Microwave on low(plevel 30%) for 30 seconds
8. Let sit for about 45min- 1 hour
9. Bake at 375 until golden brown, about 15 min I believe
Total time 1.5 hours, but I think I actually let the rise go longer than neccessary

For a real treat, follow steps 1-7, then fill with chocolate ganache. I make these for breakfast once a week or so. Let me know what you think, or if you have any suggestions. Enjoy! ~Erithid

Baking Right After A REAL Disaster

Well since asking the question about what kind of adjustments are to be made at high altitude I have been researching on the web quite a bit. It is very perplexing, contradictory and fustrating. It is said that 37 states have cities that are over 3000ft. yet there are only a handful of books devoted to the subject. Think also of all those RVers traveling all over the place to multi mountianous regions you have an aweful lot of people who need a sound guide to help them out.

I have come to realize even in general cooking I've already made a bunch of adjustments out of necessity such using a pressure cooker,cutting back on sugar in desserts, buying only better pastas so it doesn't gum up from the extended low boil cooking, lower deep fry temps and more to come.

Some people have made adjustments and have never acheived the type of results they were accustomed to at lower alts. and even moved back to low baking Nirvana. Restuarants in CO. solve their bread and muffin problems by ordering from lower alt. bakeries. Then the brave claim absolutely NO Changes are necessary proceed as per recipe (a few of those were from these here parts in Northern AZ).

Then you have a master baker Susan Gold Purdy who unabashedly admitted to all the utter disaster in New Mexico when she tried to recreate a Chocolate Buttermilk Cake at 7000ft which crashed as it cooled. Those in attendance all encouraged her to seriously consider the vast undertaking of creating a systematic cookbook using 200 of her favorite recipes from all her previous books.

This has been accomplished over course of a number years in real household kitchens at 3000ft, 5000ft, 7000ft, and 10,000ft. Every recipe had to be indivdually ajusted and tweeked to match its sea level counterparts.

As I look at this weekends Baking Extravaganza sitting in my back porch do I really want to turn out another 3- 2lb loaves of Banana Bread that though not too dense have absolutely no dome to talk about? Or alas my Italian Bread attempt with good looking crust but is only a little higher than a Biscotti?

Yes right now there are many of our follow countymen, women, children without parents, some dead and still undiscovered in their ravaged homes who will never again be able to even flip a pancake. As I asked my own beloved should I throw this bread away? The reply I've been nibbling on it really brought it into perspective.

I can purchase "Pie In The Sky" by Susan Purdy in attempt to solve some of my little culinary problems but I better keep my feet on the ground and have LOVE in it or it just isn't worth it. Finaly arrived.... The bread baker's apprentice at my hands :-D. It looks very informative &the beautiful illustrations make me want to bake.

I have to dedicate my time in the coming days for reading this amazing book.