This is Major Tom to Ground Control!

My local grocery store have just started to stock buckwheat flour, a flour I'm completely new to. To try to figure out what it's all about, I pulled Whitley's "Bread Matters" from my shelf - a great book by a passionate baker with a separate chapter on gluten-free baking. On buckwheat, Whitley says:

Good qualities: Traditionally used in Russia (in wholegrain form) to make kasha (porridge) and as flour to make blini (pancakes), usually in combination with wheat flour. In modern gluten-free baking, mainly used sparingly to provide some flavour and nutritional value in breads, cakes and savoury biscuits.

Problems: Disliked by some on account of its pungent flavour, which is an acquired taste.

Hmm. "Pungent flavour". Well... better start off easy on the buckwheat then, right?

So far, I've experimented with a buckwheat content between 5% - 25% of the total flour weight, and I can't say I notice any negative pungency. There's certainly a different flavour note to the breads; quite subtle and hard to describe, really. A subtle, piercing, nutty kind of flavour. Anyways.

Today I baked what I think is becoming one of my favourite multigrain sourdoughs: There's 20% buckwheat and 10% whole rye in this loaf, and the soaker is a combination of flax, sunflower, quinoa and pumpkin seeds. 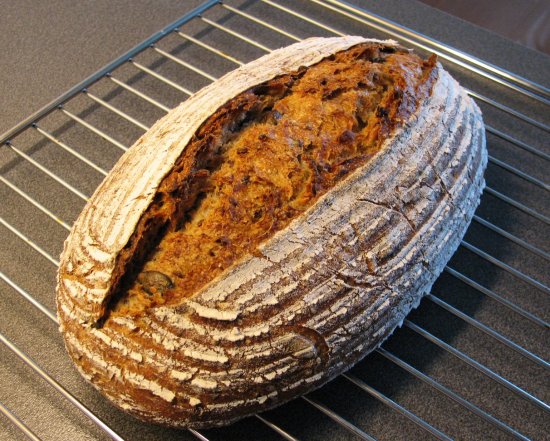 I do think the buckwheat makes the crust brown quicker than what I usually get. The loaf comes out with a crackling crust, almost like a baguette. And the crumb attains a slightly grey colour, also due to buckwheat, I would guess? 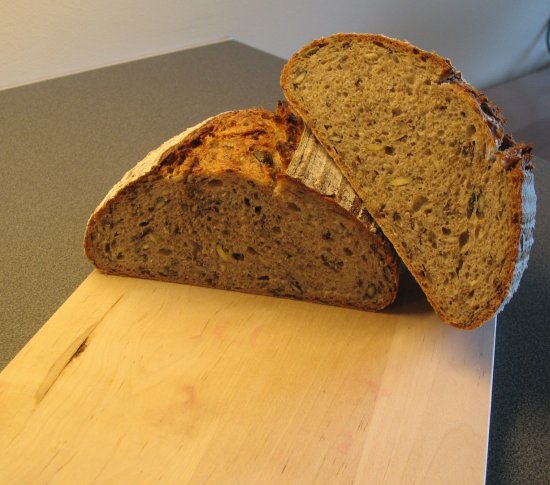 It's fun to mix in different flours in tested recipes. Earlier last week, I used 30% whole rice flour in a pain au levain, and that gave the loaf a completely different flavour. Slightly bitter, I would say. Not something I'd like every day of the week, but certainly terrific together with an ageing brie I was having a love affair with.

For dinner, I went with a blind baked pâte brisée tart shell filled with scrambled eggs, a dab of Dijon mustard and freshly cooked crab. The recipe (and inspiration) came from Michel Roux' brilliant book on pastry. 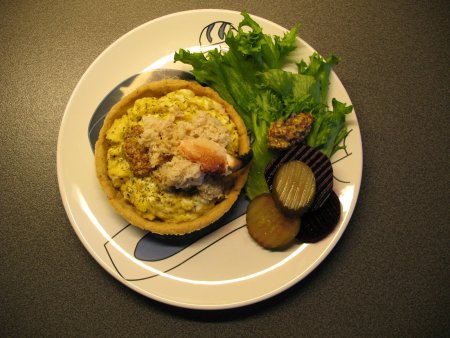 Cherries are also starting to pop up in grocery stores and markets around here, and this week I had the opportunity to make a cherry clafoutis (not photographed, recipe also from Roux' book) and a Gâteau Basque: 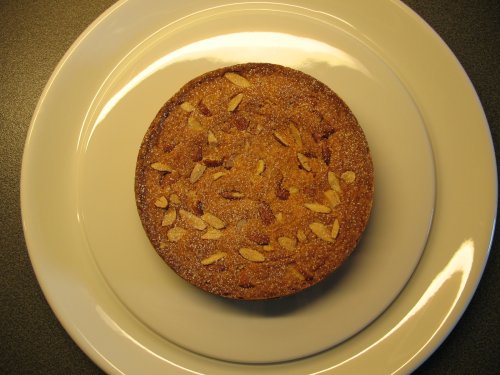 This is a very simple tea/coffee cake with a pastry cream and/or cherry filling. Since I had some left over cherries, I pureed a bunch in my mixer, and used that as the single filling in the cake. As I wrote, it's a very simple cake: Cream butter, sugar and eggs, and fold in flour, a speck of baking powder, some vanilla extract and load up your pastry bag. The batter resembles that of choux pastry, and it's deposited into the pan by first filling the bottom in a spiralling motion. Then pipe a border along the rim, top the interior with filling, before you pipe the top over the whole to seal it. Sprinkle on chopped almonds and bake in a low oven for just under an hour. Nothing too fancy, but goes well with a cup of coffee! 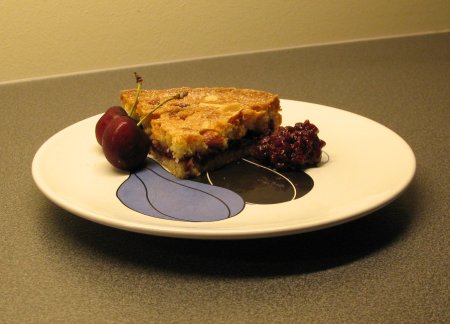 Oh Wow, Hans!....Ground Control just left to go over to your house for this fantastic meal you have prepared.  Beautifully done!

Hans, I am beginning to believe that you have a secret life as the chef of a five-star restaurant and are sharing your latest creations here.

Your food, presentation, and plating are fabulous.

How about visiting the USA so we can enter you in "The Next Food Network Star" competition?

My grandfather used to love what he called "black pancakes." They were made from buckwheat (although I don't know if it was pure or if there was some wheat flour in as well).
If you were not expecting it, the color could be a little off-putting, but they did taste really wonderful.

Everything looks beautiful and delicious.

I think your use of seeds and grains is very interesting, esp. soaking the quinoa.

I recall trying a buckwheat drink at Jamba Juice once. their buckwheat looked literally like grass. is that the same plant?

@ TeaIV: I think buckwheat is closely related to rhubarb, and classified as a fruit, not a grain. The seeds are apparently small, grayish things... It's high in protein and rich in vitamins and minerals, and it's gluten-free.

It all looks awesome. I used to love buckwheat pancakes as a kid, but have'nt had any since. I think it must be time !

Surely you jest!  Your pictures are always a pleasure!  The coffee cake reminds me of Linzer Torte.

Buchwheat is also sold as roasted flour in China and South Korea.  Saw some yesterday.  It is not grey but dark brown and smells, well, roasted.  Good luck with the experiments.

i like the look of those bread slices and the cherry pastry.

very impressive, HJ. Your baking/cooking in a most peculiar way. Can you hear me?

Thanks, Jw! A fellow fan, I presume? We know Major Tom's a junkie, strung out in heaven's high, hitting an all time low.