Experiment - Effect of the levain on 100% Whole-Wheat Sandwich Bread 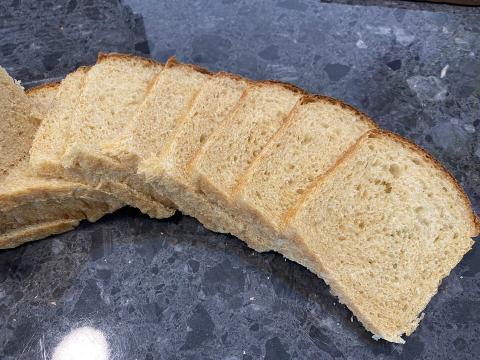 My first attempts at this bread were flawed in that I got very little rise. Debra Wink (DW) contacted me and suggested some tweaks. As a result, I introduced some Vital Wheat Gluten (VWG) to increase the protein percent of my whole-wheat flour. I also pre-fermented 5 percent of the flour in a stiff levain. I wasn’t sure what effect the levain would have; rise, flavour enhancement, crumb or all. I’ve had a great result by incorporating both the VWG and the levain now for many weeks.

I wanted to check what effect the levain was having on the rise, crumb, and flavour of the baked loaf. Today’s bake: I eliminated the levain and recalculated the formula.

I compared the rise, crumb, and taste of both loaves (my lovely wife was also a judge).

Rise: at all stages throughout the process, the rise hit the milestones. Picture 1 is at the start of the final proof. Picture 2 is at the end of final proof after 3 hours at 22C/71F. I concluded that the levain did not enhance the rise in speed or volume over time. The baked loaf had a good oven spring and baked with a nice golden colour. Pic 3.

Crumb: The crumb of both loaves was identical. I put this down to the low per-cent of pre-fermented flour. DW advised that 4-5% would not have a detrimental affect of the crumb. Both were soft as a sandwich loaf should be. Pic 4.

Taste: This was the only discernible difference. The loaf with the levain had an enhanced flavour. The loaf baked without the levain was very nice but lacked the flavour of the levain loaf.

I will continue to include the 5% PFF in the formula. 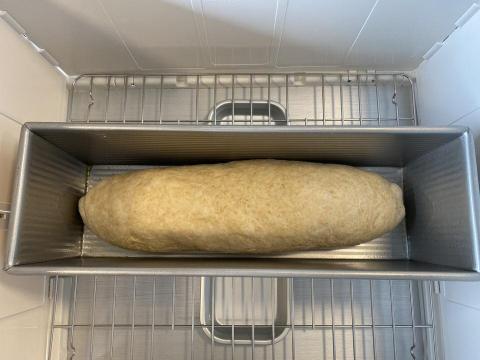 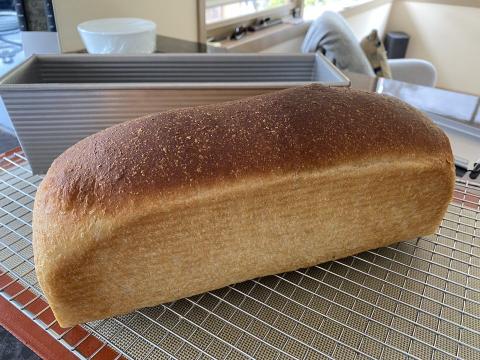 Summer here where I live. Family favourite; Base is Neapolitan pizza dough. Today’s bake is a new recipe from Jeffrey Hamelman in Bread 3rd Ed.

The recipe includes 25% whole-spelt flour that I stone-milled the day before baking. I recalculated the recipe for two 680-gram doughs.

I oven-roasted the butternut pumpkin and toasted the pumpkin seeds the evening before the bake and allowed them to cool at room temperature overnight. I also prepared the poolish and let stand for 14 hours at 21C.

The next morning, I hand mixed all the ingredients except for the seeds, and I held back 10% of the final water (bassinage). Once moderate gluten development was obtained, I gradually added the bassinage water until incorporated. The seeds were incorporated last.

The bulk fermentation is 3 hours, folding at 45-minute intervals at 24C. I pre-shaped and once rested, shaped into bunt cylinders, and placed them into 23 x 13 cm loaf pans. Final fermentation for 60 minutes.

Baked in a 232C pre-steamed oven with steam for 15 minutes. 215C for 20 to 22 minutes. The use of the bread pans ensures less crust and hero the crumb.

Hamelman notes: “This bread hits a lot of flavor bases – it is smooth and moist thanks to the squash and the honey; the roasted pumpkin seeds are a nice flavor addition; and visually it is pretty to look at – the crumb has an attractive golden hue and contrasts well with the pumpkin seeds studded throughout.” I saw a picture of your Debra Wink’s 800-gram loaf in a 330 mm / 13 inch Pullman pan. It looked terrific, so I ordered the pan from the USA. It arrived this week, so today I baked using the pan and was very pleased, apart from a shaping mistake (I shaped as per a batard out of habit instead of a blunt cylinder). I’m learning with each iteration of this wonderful bread. It’s such a beautiful taste that it is now has a place in our weekly breadbasket. A nice light soft crumb.

I was prompted to make a time lapse of my sourdough during the oven spring. This is the start of the bake condensed into 37 seconds. Sorry about the background reflection, but you’ll get the gist. They are 750-gram oval loaves, Vermont sourdough with 10% whole wheat.

You can view the video on my YouTube https://youtu.be/c90Yqi3gLBE 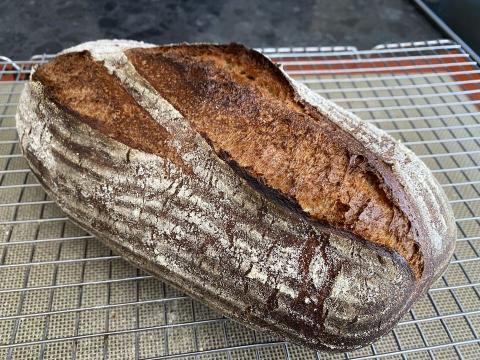 This is a Hamelman’s recipe that I’ve baked a few times. It is 75% Whole-Spelt flour that I stone-milled the day before baking. The Pate Fermentee is made 14 hours before mixing. I love the taste of this bread as it is full flavoured and quite different from our everyday Vermont sourdough loaf. 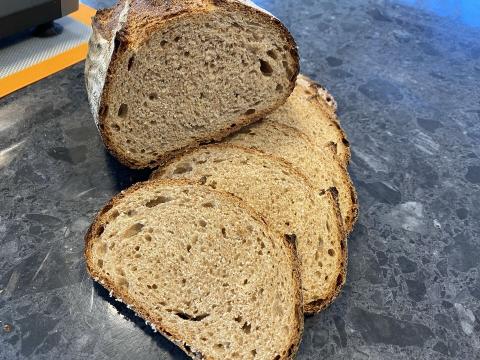 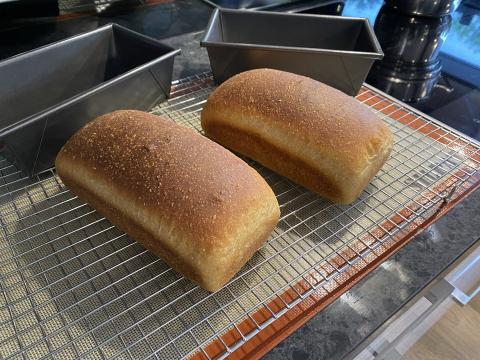 I have a quest to improve the rise and softness of a 100% Whole-Wheat Sandwich Bread. This is the third time baking this and I have been tweaking the formula with each attempt. There has been a gradual improvement with each bake and this time I got a good rise, soft crumb, and wonderful flavour. Debra Wink has graciously given her advice and ideas given that it is her recipe in Hamelman’s 3rd Edition of Bread.

The key for this bake was to raise the protein per cent of my whole-wheat flour. I can only buy 10.8% protein wholemeal flour here and DW is currently using WWF that is 16-17%. She suggested I try Vital Wheat Gluten to raise the protein per cent. I searched TFL for ideas and found alfanso’s June 2017 comment describing how to use a Pearson’s Square to calculate the amount of VWG to add.

I mixed the dry flour ingredients thoroughly before adding in. I immediately noticed very good gluten development while mixing.  I was pleased that the dough behaved as DW described. 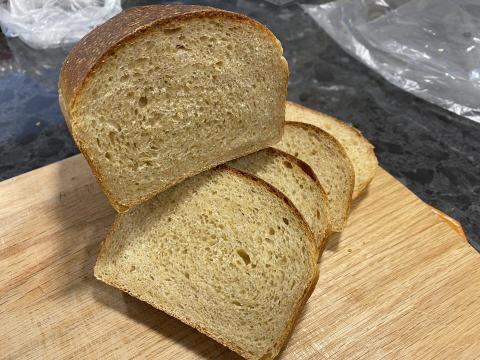 Today I baked Debra Winks 100% Whole-Wheat Sandwich Bread from Hamelman’s Bread Edition 3. I never thought that 100% whole-wheat would produce such a soft and pleasantly tasty sandwich loaf. I milled the whole wheat yesterday, but I’m not sure of the protein level as Debra recommends about 14% protein. Debra also recommended some recent changes to the formula and process tweaks for the home baker that I adopted. This was my first attempt and I’m very happy with the result, however, I will increase the dough amount for these loaf pans (21 x11 cm / 8 ½ x 4 ½ inches) as they would be a better sandwich slice if taller.

This was a very different process than what I’m used to and have extended my experience and knowledge. 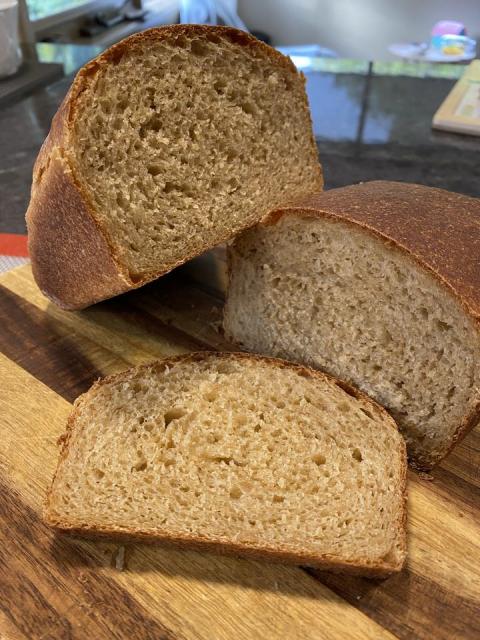 I don't think I could fit in a third loaf. Two 750-gram loaves are my maximum per bake.

Demonstration of my DIY dough loader

I was urged to make a short video about using my DIY dough loader. This was made today, loading three baguettes onto the baking stone. You can check out the video on YouTube using the below link.

Here is a picture of the finished bake: