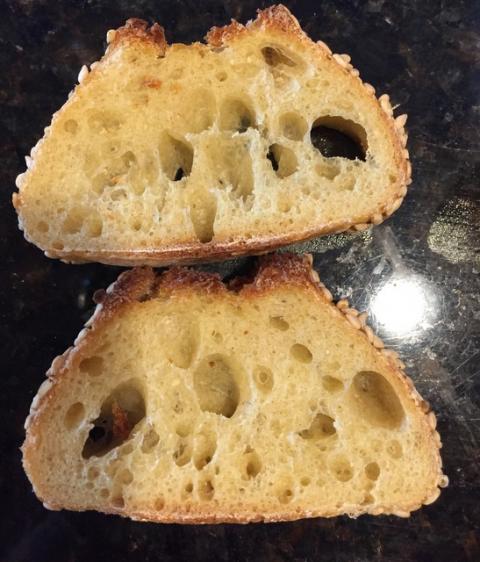 A few months ago I posted my version of Abel Sierra’s Tritordeum baguettes, a result of which is posted in the lead photo.

Tritordeum, as stated earlier, is a new hybrid grain developed in Spain after decades of breeding and cultivation, and finally coming to market sometime around 2013 or so.  It is grown primarily in Spain, France and Italy and available across a few European countries.  After recalling the posting by Abel I came across a 500g bag in Trieste Italy and gave it a one time bake upon returning home.  My posting in Aug. 2018 is in the link above.

In Barcelona last week, I recalled that the worldwide headquarters of Agrasys, the company that promotes Tritordeum, is located there.  Unannounced, I rang the doorbell to their office on Tuesday afternoon, to see if I could register a “complaint" that I had searched a number of small and large supermarkets in the city in a vain attempt at finding the flour on a shelf.  Anton, who answered the ring, came down to discuss why, and we talked shop for a while.  A meeting was underway in their offices, and so Anton was apologetic for not inviting us up. When we returned an hour or so later, he greeted us at the downstairs front door again, this time with a bag of a few sample flours, two packs of Tritordeum crackers and a pair of IPA beers brewed with the grain.  And an offer for a return visit later in the week to come up and meet the staff.

Anton had glanced at my TFL blog and stated that he mentioned me to the others in the office.  We returned on Friday, meet the staff and discussed shop.  Still frustrated at not being able to locate the grain in any store, or the Forn Baltá bakery in the Sants neighborhood that once sold the flour over the counter, we were directed to a grain shop nearby where they had a bag of the flour in bulk.

Anton, Verónica and the entire staff, right up to the Company CEO, were warm and wonderful and interested in my personal experiment and own interest in the grain.  It was a great experience.  Verónica knew Abel from his baking days Barcelona, and so in a way, the circle was completed, with me having discovered the grain thanks to Abel.

All in all, I came home with about 4 kilos of T150 and a few smaller bags of a more refined grain, perhaps a T65.

In the interests of “science”, I’ve already converted a 100% hydration AP liquid levain into both 100% and 75% hydration Tritordeum levains.  The three stages of builds for each took place over the course of a calendar day, with the first consuming 10 hours to mature, the second 3 hours and the third a little under 3 hours to more than double.  I now feel that I have built up a strong enough pair of levains with most of the original AP flour winnowed out.  So I'll declare that it is almost a 100% pure Tritordeum levain at this point.

The dough was incredibly slack at my singular 70% hydration experience.  But with my planned 80% T150 grain as well as my decision to use 20% strong white flour, and after discussion with the staff, I feel as though I can still maintain a 70% hydration dough and get a less extensible result.  This should yield a dough that is more manageable than in my prior experience.  Time will tell and I’ll post some of my experimental results along the way.

A grateful thank you to all of the incredibly inviting people who we met at Agrasys. 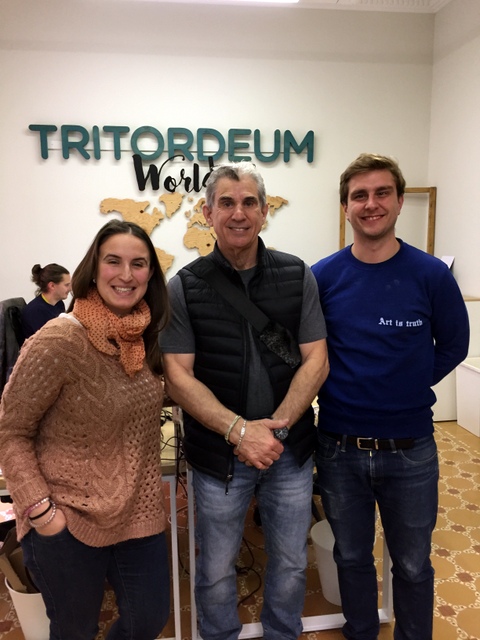 Anton's first "care package" to me: 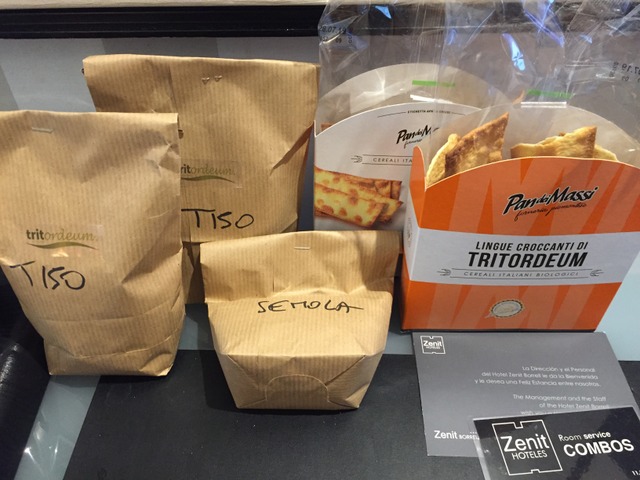 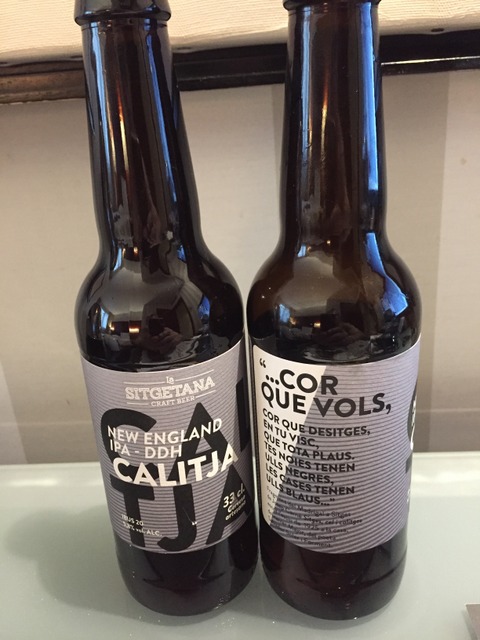 The ~6K of grain now nestled in containers: 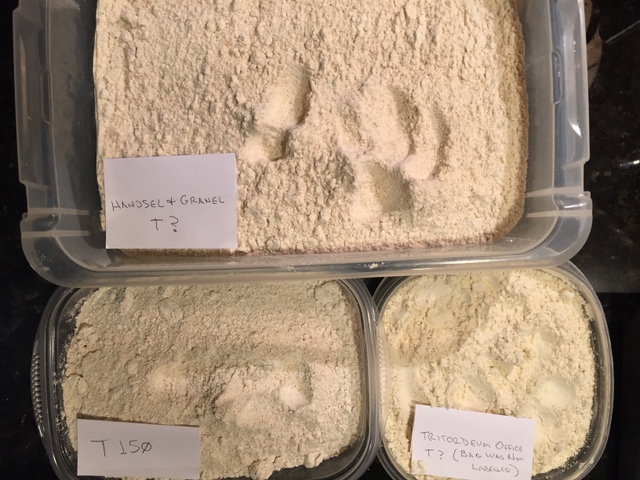 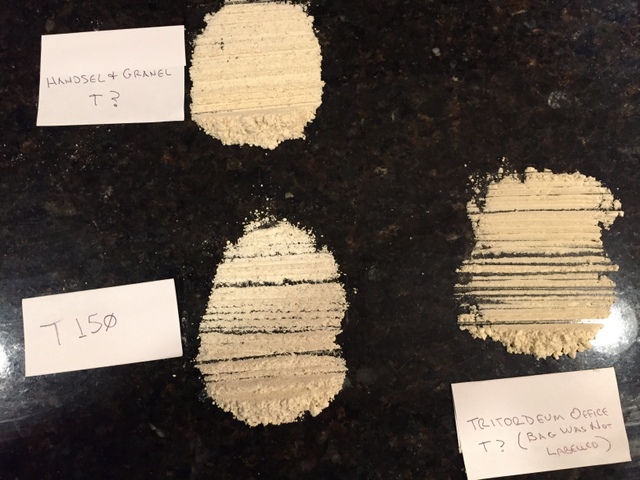 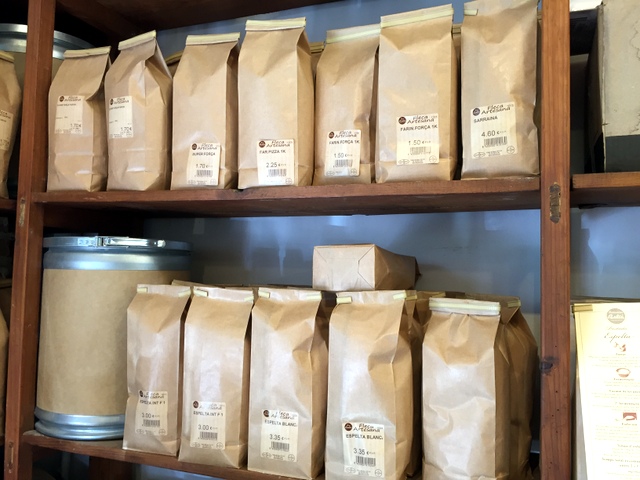 Barcelona is a wonderful city.  One of Antoni Gaudí's first creations: 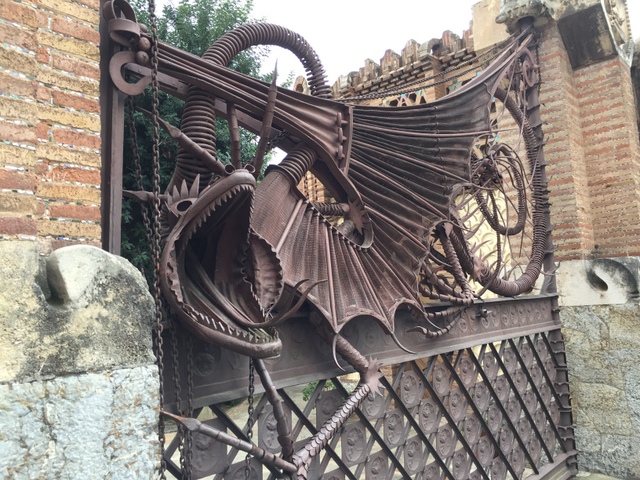 And "just" another doorway in a city graced with exquisite and fantastic architecture. 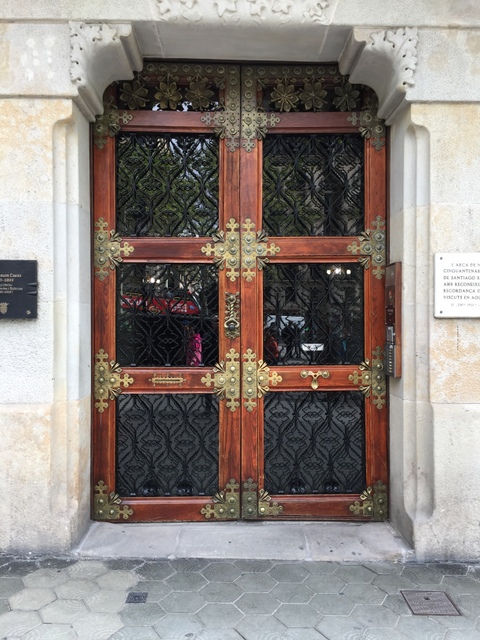 Very nice Alfonso. The bread looks wonderful. Can’t wait to see your posts! And to hear more about this new grain.

a new product in a field/market already crowded.  With many bakers already flocking to "ancient grains", especially home bakers as so many of we at TFL are, it may be hard for the consortium to get a foothold.  As the website says, the grain has a number of advantages over more common grains.  Quoting from one of their pages:

It was, as I mentioned, a quite difficult grain in it's very fine form (think durum/semola rimacinata)  to work with as the extensible nature of the dough made it one of the most challenging that I've worked with at 70% hydration - or any hydration for that matter.  But I'm game to seeing what I can do with it, especially given the fact that I went "out of my way" to locate it as well as the genial and welcoming nature of the staff at their office.  And they were also curious as to what I would be able to do with the grain in a home kitchen.

I have few and far between opportunities to chat with others who have the passion for bread baking beyond the simple that we at TFL exhibit.  Even for that generous one hour of their time, it was good to find myself immersed in a playground surrounded by others who share that passion and also enjoy speaking of the craft on a level above the basic lingo.

And due to the interaction with them, I almost feel a duty to experiment more that I would have had I been able to find the packaged product on a store shelf.  For the record, the larger markets that I went  to find it were at larger footprint Carrefour and Mercadona supermarkets.  The Forn Baltá bakery had a great supply of grains for sale in various sizes, except for you know what.

that fantastic door!  Now I want some of all 4!  Very nice Don Baggs and happy Baguette making with a all new flour stuff!

the metro area being the center of the world for microbreweries and brewpubs, I just about took baths in ales while living there.  A number of pubs there probably still have the remnants of an impression of my hind side on their bar stools.  Most of the world doesn't seem as keen on "strong" versions of ales as we have here in the USA, especially with potent "west coast" style ales being taken up across the country now for the past few decades.  IPAs are not as robust in Spain, and so that given to me was on the less hoppy side of life. Still a most grateful, thoughtful and tasty gift and example of what can be done with the grain.

I think that I'll split my bakes between baguettes and batards, known in Barcelona thanks to the dominance of Catalan language there, as Xuscos.

I've been fortunate to have spent a number of months in Buenos Aires, which a century ago was one of the richest countries on the planet thanks to the export of grain and cattle.  Both the government and its wealthiest citizens looked east for design when constructing their opulent homes and buildings that their incredible wealth could afford.   Many folks see the city as a kind of Paris copycat with a fair number of buildings taking on the character of the Paris skyline.  I found the similarity much more likened to Barcelona with many more buildings evoking that style.  However, the more phantasmagoric creations of visionary architects, Gaudí being the foremost of the group, far exceed that of B.A.  The citizenry of Barcelona must have been incredibly enlightened and willing to accept such "futuristic" designs.

meeting with people who developed Tritordeum! Especially when they're nice people who'd offer you such a generous amount of samples. What an opportunity to gain more knowledge about this interesting grain!

And the gate is almost as artistic as your bread, that's saying a lot.

What a nice compliment, although I've yet to incorporate a dragon head into bread.  After the fruitless search for the grain at many markets, it was sheer serendipity that I was directed by them to a natural foods type of store mere streets away from their office which carried it in bulk.  I'd know nothing about it had it not been for my interest in following the inventive and fine creations of our own Abel Sierra (Abelbreadgallery) on TFL.

Nice write up coupled with lovely architecture. All in all what looks like a great trip to Spain.

Was about to say "that looks like your last bake with this grain" and then realised it is your last bake. So what have you planed for the next Tritordeum bread?

of the grain sitting resting in abeyance in my wine cooler until later today.  2 baguettes/long batards and one xusco/batard to get the ball rolling.  80% tritordeum/20% strong white flour, 70% hydration.

It seems like the grain is likely more available to professional bakers than to store shelves, but my sampling and knowledge of it is so small.

Yes, the first time there, but certainly won't be the last.  Just as I could live in British pubs on real ale and pub food (although I'd have to let the belt out a few notches), I could just as easily live in tapas bars and drink sangria day and night.  Of course mornings would be dedicated to the wonderful pastries and cafe con leche found on every other street corner.

and amazing bread! Ever since Abe mentioned how to get my hands on Durum Rimacinata in a little deli in London I am totally hooked on baking with Durum and love the soft yellow hue and crisp crust I appear to get.

I shall keep an eye out for this flour in UK as I love trying different flours. Did you consider making an Altamura loaf ..? I am too scared to try that yet.  Kat

and this flour is a lot like it.  Growing up with proximity to Italian bakeries I gravitated early to "Italian Bread" - basically some semolina based product with or without sesame seeds on top.

One of the fun things about travel is connecting with people not just places.  So a get together with these fine folks certainly satisfied that itch.

Exactly three years ago, there was a flurry of Pane di Altamura activity on TFL, and so I threw my hat into the ring, or dough into the oven, as well.  A completely profane shaping of their traditional bread shape, but I haven't been hunted down by the townsfolk yet and still here to tell the tale.  http://www.thefreshloaf.com/node/45441/pane-di-altamura-alfanso-style

If you really want to be a rebel, try the Pane di Matera, another semolina from a neighboring town.  http://www.thefreshloaf.com/node/49347/pane-di-matera-materas-bread.  Or are you a scaredy-Kat?

and on my to do list for sure...bookmarked both of them! Thank you so much for the tip Alan.

I prefer Durum actually to Kamut, if I dare to say...I also love to experiment with different shaping and recently even ventured into Pain Fendu territory which had everybody laughing in our house without going into too much detail!

I am also so pleased that Shipton Mill here in the UK sell Durum and means I have easier access rather than a trip to London and schlepping kilos of flour back from Soho...

The things we baker do! Kat

Nice to see you together with Veronica!!! She's a good friend. I also visited her many times in my Barcelona years.

The people in Agrasys is fantastic, they are making an excellent job.

Tritordeum has a great future. I encourage you to bake 100% tritordeum flour, but also combining with other flours.

Also other products made with Tritordeum. I show these Tritordeum Orecchiette that we coocked with garlic, broccoli and anchovies. 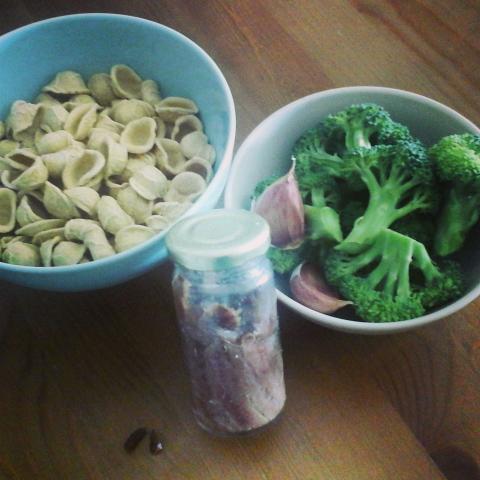