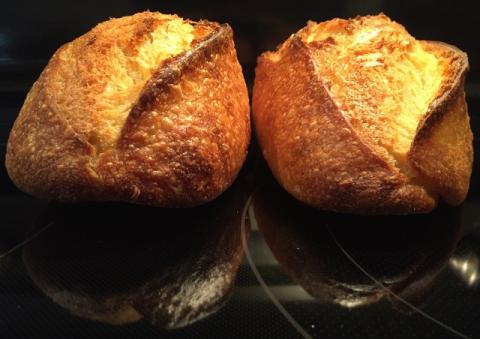 Well, wouldn't ya just know it.  Another day, another Pane di Altamura posting.  With my recent trip down to Lorenzo's in N. Miami Beach (no beach!) and finding a source for semola rimacinata at US$1/pound, I was stocked up and stoked up with all of this durum discussion underway here.  Following David Snyder's posted formula (for the most part) and seeing what Brad (breadforfun) and Abe (A BakEr) were up to, it was my turn to also jump on the bandwagon.

I decided to do concurrent first builds of the biga, just for the experimentation of it all.  One biga with my ever-ready levain fed down to 60% hydration, and the other with my stiff starter, already ~60% hydration.  The levain based biga took 7 hours for the 1st build to double, while the starter based version barely showed signs of life at that point, until it started moving and took a full 12 hours for each of the 1st and 2nd builds.  So I stuck with my levain based version.  2nd build was another 7 hours, however the 3rd build was under 6 to grow beyond doubling.

As an aside, I felt it was time to refresh my starter, which was last refreshed on 02 Nov 15.  But 5 months old and it was still going strong, for anyone who still wonders how long a stiff starter can live a healthy refrigerated life.

I did bump the overall hydration of the dough up to 65%, and also made the mix 25% larger than the formula posted by David, so it clocked in at a total of ~1145g total dough weight.

One set of 200 French Folds, a 10 minute rest followed by another 200 FFs.  And then left to rise on its own for 5 hours, no stretch and folds, before dividing.

Being alfanso, once it was shaped and couched, it went into the refrigerator for an overnight nap and was baked this morning, as usual, directly out of the retard.  Also, being alfanso, and liking to change around a thing or two, I decided that these would be shaped and scored as batards.

Abiding by the oven temperatures and timings in David's post, these baked for 15 minutes with steam, and then another 21 minutes, with 2 additional minutes of venting before being removed.  As noted, the dough was quite soft and puffy, and I wonder if my shaping was a tad too aggressive considering the crumb.  But the oven spring was all I could have asked for.  Since I really didn't know what to look for in this bread, nor how it should taste, it was all, and I mean all, new to me.

Due to the retard time, there is a mild SD tang to the bread.

The first build completes in 7 hours.  The third build in just under 6 hours, but I was late to snap this 2nd picture.  I made a few dozen more grams of biga than needed.  Some biga or dough is always lost to my hands or the workbench or mixing/fermenting vessel, so my habit is to always make a little more than the formula calls for. 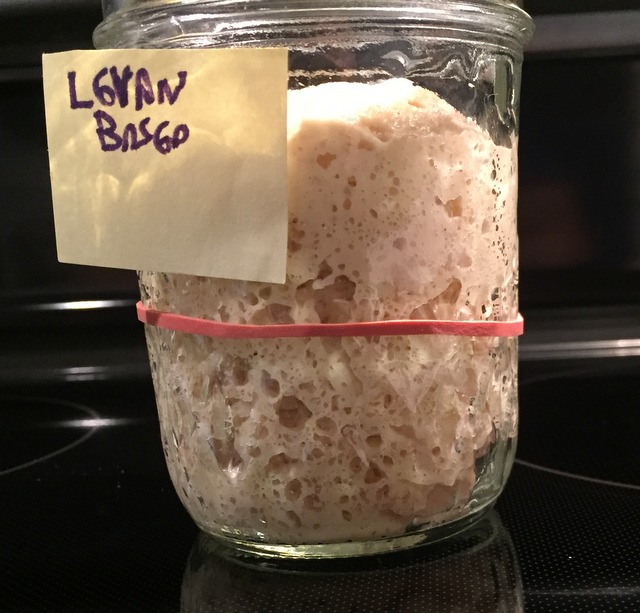 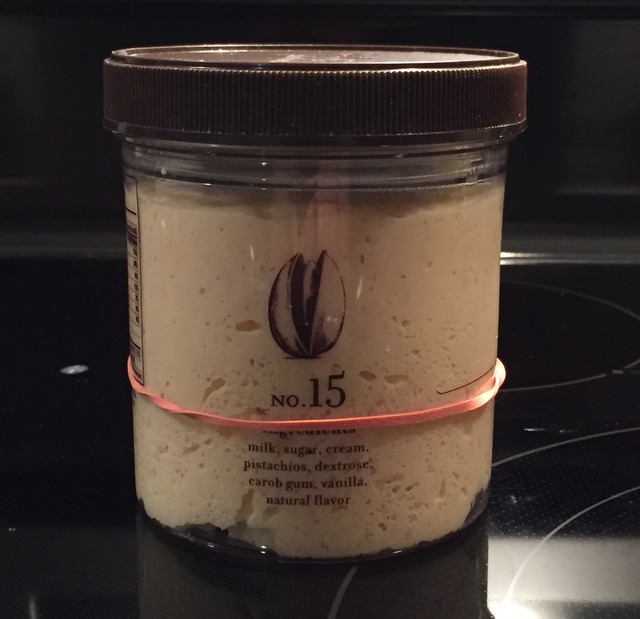 The dough after the 2nd set of 200 French Folds, and after the 5 hours of bulk rise at 80dF completed. 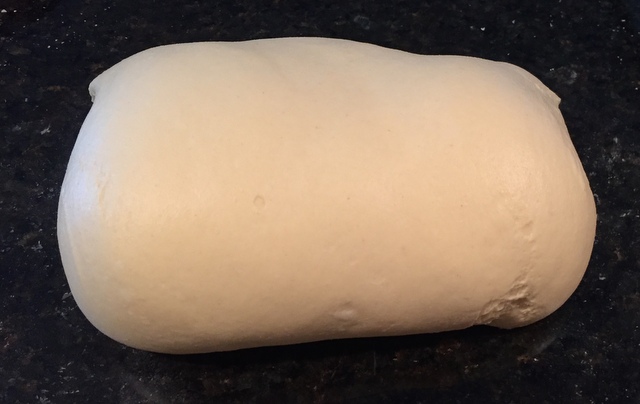 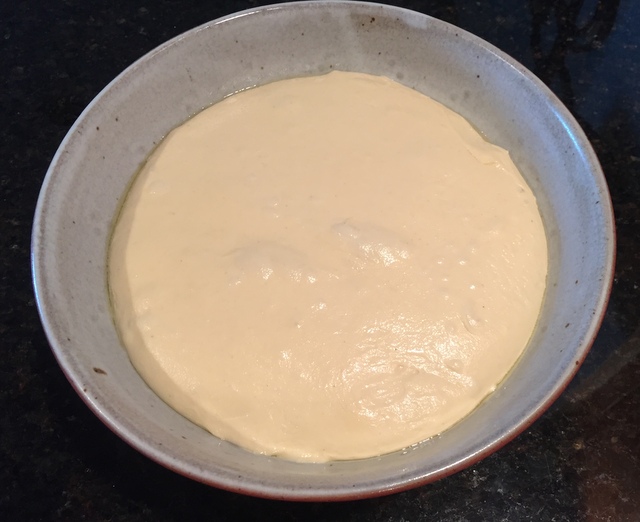 Shaped as batards and the double score applied just a minute before entering the oven. 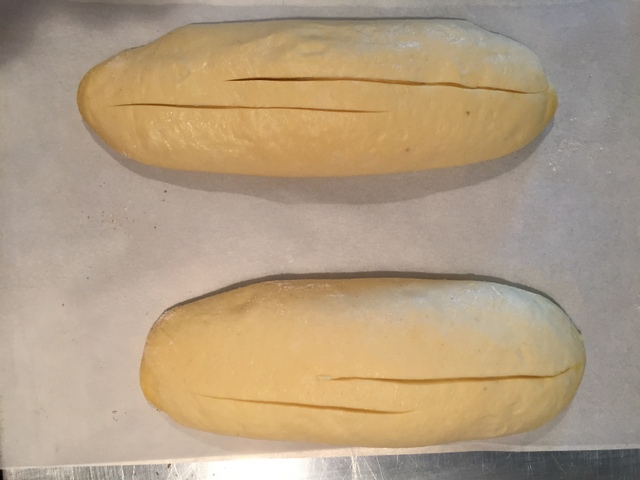 Steam released after 15 minutes, and batards have been rotated front to back & left to right. 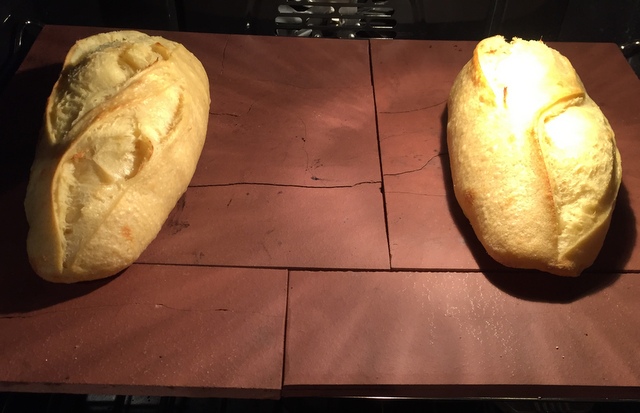 The end game.  In this case, the colors are accurate. 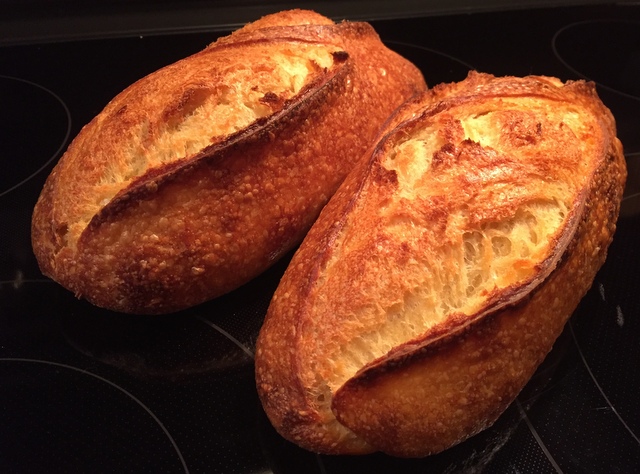 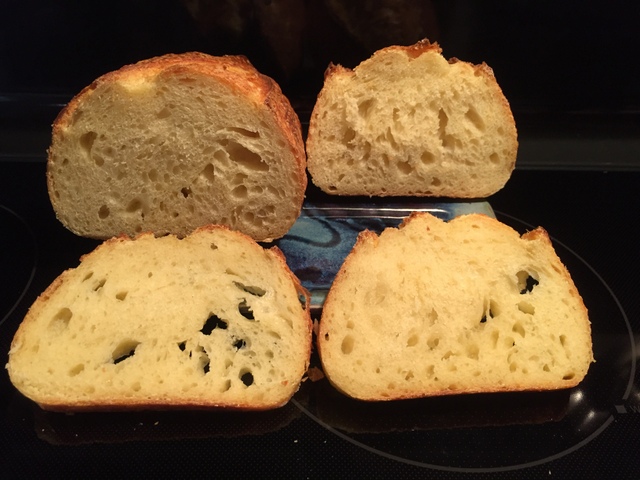 Alphonso di Altamurish.  You really got some spring and bloom out these - with a totally different method.  Looks grand all the way around.  Well done with that crumb too.  I'm pretty sure I would like the more sour notes of this bread too.  Now Lucy wants to pumpernickel one of these babies .......

the Sunday roast if she had her way.

I had no clue as to what to expect with a 100% durum bake and relatively low hydration, so I was crossing my fingers that there would be some bloom.

Be sure to have some dipped in EVOO!

is all I had on hand, but now I might have to invest in some really peppery EVOO before the day is out.

I would love to taste those. I am so impressed with everyone's breads! It definitely motivates us newbies.

To misquote a riff from Billy Crystal's Fernando character - "looking good is better than tasting good".  They came out better than I could have ever imagined, although to me the taste doesn't live up to the look.  But I've never tasted 100% durum before, so I really don't have a guideline to measure by.  For a first time out of the gate, I'm really content with the outcome.

Whatever you did, it clearly worked.  It looks like your standard SD technique, maybe with a few tweaks, translated fine to the 100% durum dough.  If French folds can do that for an Altamura crumb, it's something I'll want to try.  Great job!

but knew up front that I'd go off the rails as far as back end procedure - meaning everything past the bulk rise.  I at least have confidence in the shaping and scoring department but really had no idea how this type of dough would react to that kind of management.  I also wasn't that thrilled with the standard "misshapen" shape of the bread, as traditional as it may be, so I was either scared of screwing it up or maybe I wanted something  more pleasing to my eye - if it worked out as planned.

The FFs were funny in that the dough remained rubbery and dense, for lack of a better description, throughout the entire FF phases.  I just figured that with less gluten to work with in this dough, that I'd have to try to encourage more strength through additional FFs.  If you don't do them with any regularity, FFs seem like way more work than they are.  Clearly more work that a no-knead or minimal knead in the mixing bowl.  But once I got into he swing and rhythym of the folds, they go quite quickly, and are a good substitute for missing a day at the gym...

Your loaves look awesome, really beautiful. I read your post on an empty stomach and i just got even hungrier!

Double scoring batards until I get it down cold is now my thing to do, until the next bright idea permeates my cranium.

Looks great Alan!  Love your adaptation of David's recipe and looks like you got great results.  Will have to try this one soon.