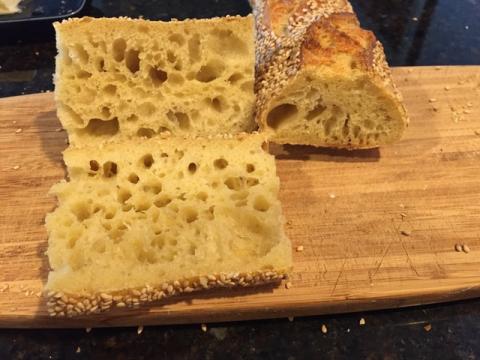 Between a fair amount of time away from home and baking the same old reliable stuff, I haven't been much of a blogging presence around these parts lately.

On our last morning in Trieste last month, I stopped into the small Despar supermarket to check out their flour section and came across a flour called Tritordeum, which I had never heard of before.  Those in mainland Europe may be familiar with it as well as a few old-timers on TFL who may recall reading our Abel Sierra's few postings about this flour in 2014, including a posting for baguettes.

Tritordeum is a new hybrid grain, a cross between barley and durum, originally bred and cultivated in Spain (hence Abel's familiarity with it) and available mostly only in Spain and Italy and perhaps a few other European countries.  I picked up a 500g bag and slipped into my suitcase for the long ride home.

A single bag wasn't going to get me very far and, indeed, I used all 500g on this dough.  No room for do-overs, this was a one-shot deal for me.

Somewhat following Abel's outline, I changed around a few things.  Here is his writeup on his related YouTube entry.  Even for the non-Spanish speakers, the majority of this should be understandable:

I didn't have enough tritordeum @20% prefermented flour to also make the levain.  Here are differences:

Due to the long cold retard, I eliminated the IDY.

The dough was magnificently easy and handleable throughout the French Folds, and incredibly extensible during my bench-top Letter Folds.  A dream.  Off to cold retard it went.  And that's when Happy Days ended and trouble in River City began.

Upon divide, and pre-shape I realized I was dealing with a wholly different animal (vegetable?).  This dough was quite moist, still unbelievably extensible.  But getting a baguette shape out of it was a step away from trying to wrangle cats.  As the dough is a hybrid of barley and durum, I opted to coat two of the three in sesame seeds - my go to version for a semolina bread.  And even that was a challenge.

I was pretty dejected as I placed them onto a well floured couche for the remainder of their overnight retard.

I can state with certainty that this was right up there with one of the two most difficult doughs that I have tried to shape so far.  And no second chances.  I unfurled the couche early this morning to find that they had flattened out.  Grr.  Scoring them was less of a challenge than I anticipated, and off they went into a steamed 460dF oven.

Surprisingly, the dough was quite forgiving as it baked, and although I am unimpressed with the final grigne (for me) and the baguettes are still flat, the results are way better than I could have anticipated.  And most surprisingly is how open the crumb is.  So far the taste is most similar to a semolina bread.  And yes, the crumb is that yellow.

You can read about Tritordeum here.

The 500g bag with my bubbling AP levain in the background. 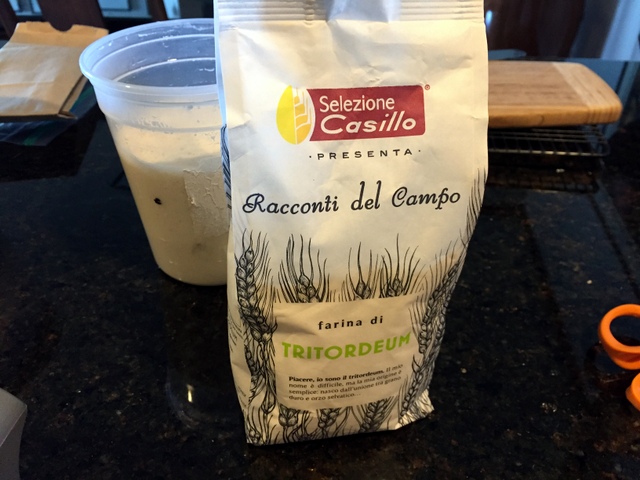 Post French Folds, when the blob was still well behaved. 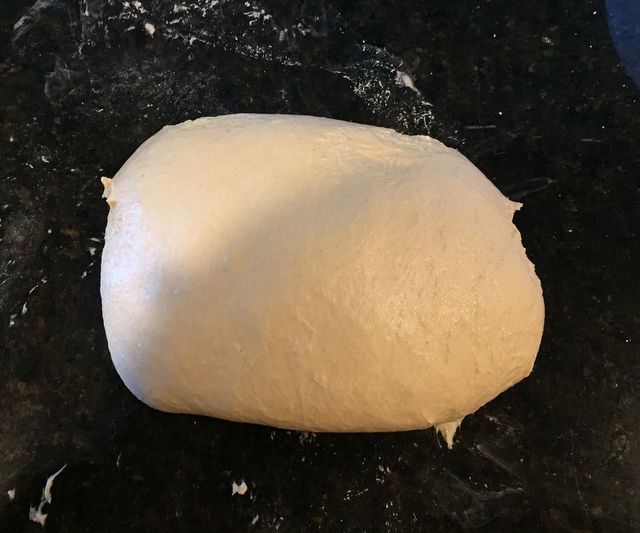 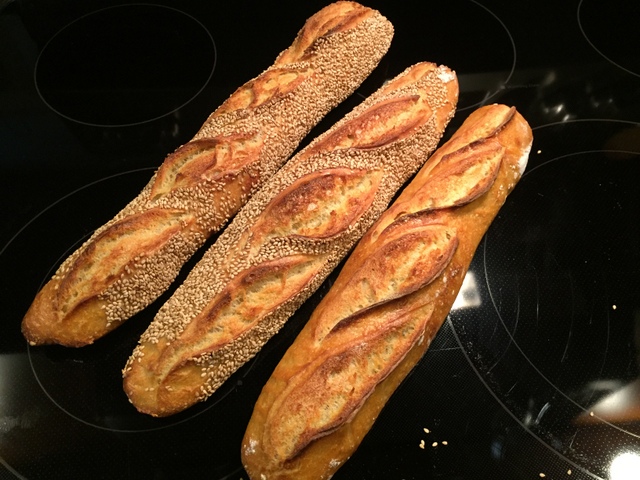 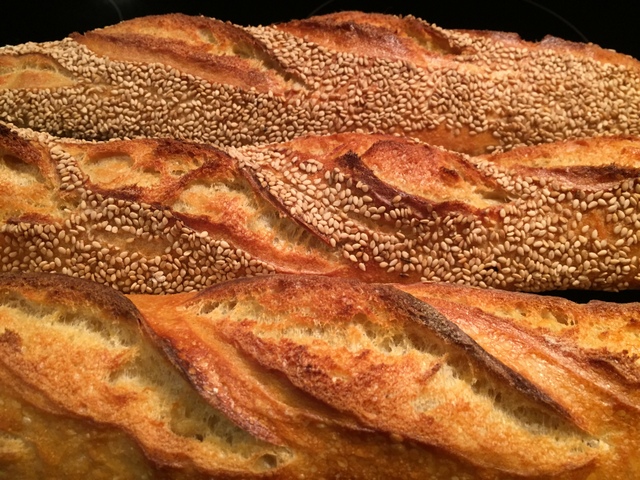 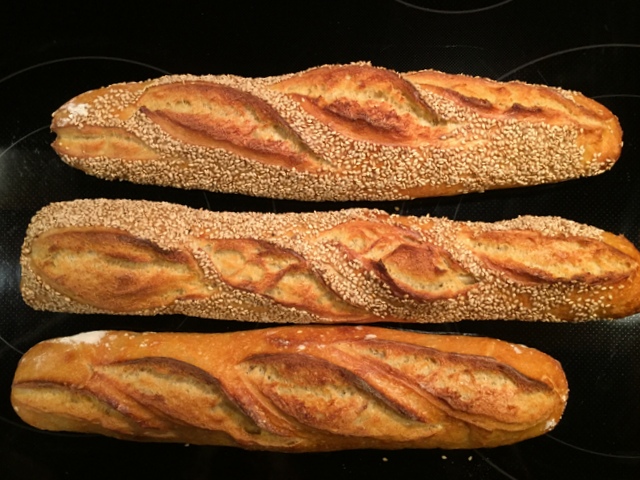 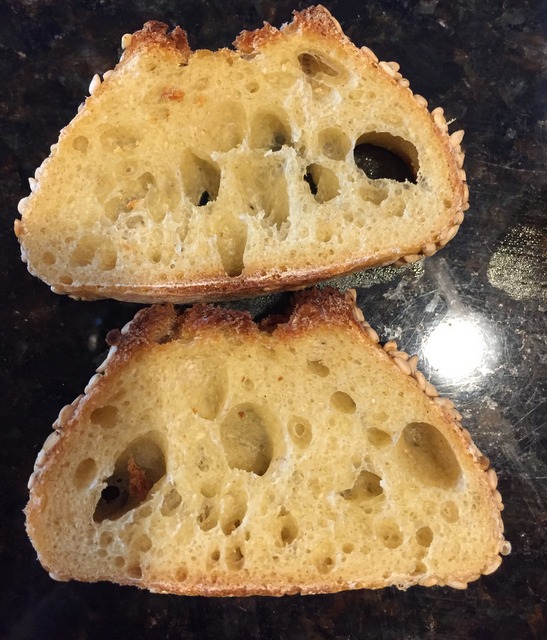 And just for fun:

Flours in a Porec, Croatia supermarket 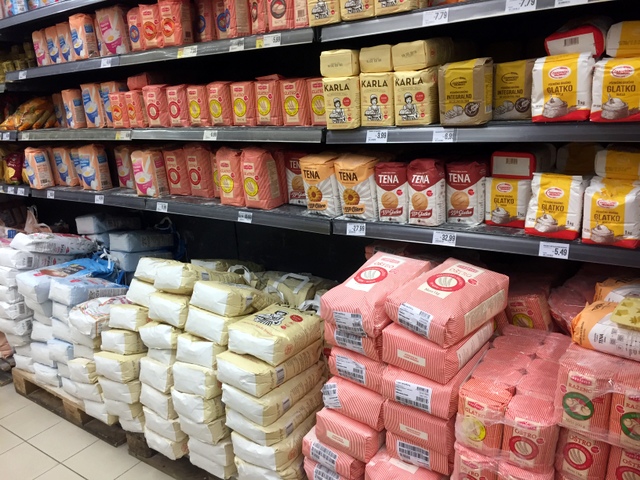 Flours in a small market in Krajska Gora, Slovenia in the midst of the magnificent Julian Alps. 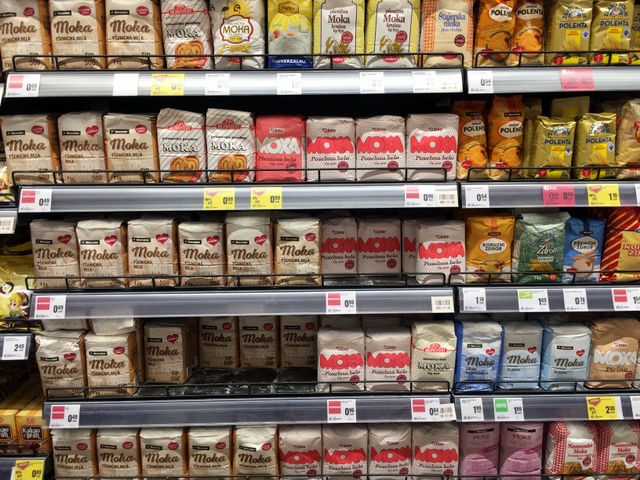 I am still dithering around trying baguettes but it seems not to be for the fainthearted....Ha, Ha   Well, I think you pulled this one off beautifully, with crust and crumb!

The dough looks so soft! Amazing texture and crumb and crust....    Kat

for good reason, very powdery.  Barley I have scant experience with, just one bake a few months ago.  My brother is going to Spain in the Fall and perhaps I should petition him to pack a kilo into his suitcase for me.  I think that I'll have a better take on shaping the next time around.

Baguettes are decidedly not for everyone, and for those who chose to not venture there, it is not necessarily a loss.  As I mentioned numerous times on TFL, when I started out I dedicated basically a year to pretty much nothing but baguettes.  But that's just me, and shouldn't define anyone else.

Thanks for the kind words, alan

But if it has the sweet nuttiness of barley with the gluten of wheat you need say no more. How do I get hold of some short of jumping on a plane?

at Linas Stores whether they have it....just wondering as it was in Matteo's baking book and he is Italian and based at Lake Como, I think....

on my next quest. Thanks for the idea Kat.

gets more of a sweetness out of it than I do.  It is still basically a durum type of flavor profile to me.  One area where this bread shines is that it makes absolutely outstanding toast!

pans.  Seems that Able's 65% hydration was closer to what was needed?  It sure came out nice in the end!  Looks like the ears ans scoring ere Ok too.  You are too hard on yourself!  Seems like a lot of folks are going to Slovenia now a days.  I hear it is really cheap compared to the rest of Europe but the scenery is grand and the food not too bad either.  Really nice overall and not a waste of good flour!  The malt might still be good if vac packed and kept in the freezer for 4 years:-)

but for a North American it tended to be on the less expensive side of life.

Actually I'm pretty satisfied the 70% hydration was a good call by me.  When I looked at Abel's crumb, I thought I might be able to get it more open.  And I did.  One of the rare times I'll best Abel at anything!  It is just the surprise and unfamiliarity that got to me.  If I get another chance, I'll use a bread flour rather than an AP for the levain to give the bread a chance at some elasticity.  The countryside scenery is fantastic, and the city of Ljubljana, at least the historic part, is like an Art Deco-ish Disney-World, where all life takes place within two blocks of the slender riverfront.

If the Diastatic was supposed to vacuum packed in the freezer, then Good Night Nurse!  But at least I didn't get any of that nasty DMP burn on the surface either!  The silver lining.

milled- it has much shorter shelf life than white flour where the gerrn has been removed and shorter than many whole flours where the germ has been reduced ......but it is worse since it is also sprouted whole grain with the germ in it too!  If you get 4-6 months after milling I would be shocked!

Most of us would be very happy with your results on this bake, especially with an unknown flour to boot!  The crumb looks nice and open and creamy and must taste great.  Love that color similar to Durum and Kamut.  Was the grain very fine?

I wish I could get some to try myself, but I don't know when the next time I will be in Europe will be :).

The flour doesn't look yellow until it starts to get mixed.  By autolyse time, the color is overt.  I suppose that eventually the flour will make its way across the pond, but eventually could also be a decade or more.  At the end of the steaming phase I could tell that the dough had made a recovery.  It was just the darned shaping that was a real challenge.

You never fail to amaze me with your baguettes posts!

Is it just the lighting or the crusts really are slightly not as shiny as your usual bakes? Whenever I bake with barley, the crust achieved is more on the matt side...

We understand the expectations you set for yourself are high but the crumb looks truly great :) I especially like the ones with sesames coated. Yellow bread steals my attention every time so I hope this grain species will be made available to me one day.

Black cooktop background with the yellow overhead exhaust hood light.   Maybe it is a barley thing, as I've only once before baked with barley at all.  The coloration was a bit lighter than usual, but I wasn't about to push for a darker crust.  Maybe next time, if there is a next time!  Yes, I think that the crumb wound up being the star of the show.  Surprisingly open, all things considered.

Great baguettes after a nice vacation. What could be better?

Sourcing flour while visiting new places is also a nice thing to do.

to know that I had this unknown flour waiting to find a formula.  I also brought back 3k of T65 flour from my Paris trip that is still waiting in abeyance.

Amazing results you got from a flour that you used for the first time. I think they're as fine and not much different from your usual baguette bakes, especially the crumb!

shaping and length, but again, overall it turned out well in the end.  And it is a really good bread for toast, one of my favorite things in life.

They still fit in the category of baguette par excellence. Beautiful! Just beautiful!

My mother always said that I was too hard on myself.  Having spent a career in IT, that concept served me well as it was the impetus to try to get "it" better the next time.  The double edge of that sword was that I was too often left feeling as though I could have done better.  Where's my shrink when I need him?

Very nice results and it is the first time I hear for this flour. I will try to get some in the store right across the border where I plan to buy some Italian flours for testing.

I like the pictures from the shops in Croatia and Slovenia. I am very familiar with the Slovenian flours as Slovenian citizen, a little bit less with Croatian. During my staying at Island of Hvar in Middle Dalmatia I was baking quite a lot with their local flours and found them very good although the protein content was rather low. I could not resist appending  a picture of bread made with the flour from the right side of the picture of the Croatian store (same bags on two shelves - yellow-red combination). This flour has only 9,35% protein.I hope you will not mind this!

Thanks for sharing the pictures from the stores and happy baking Alan! 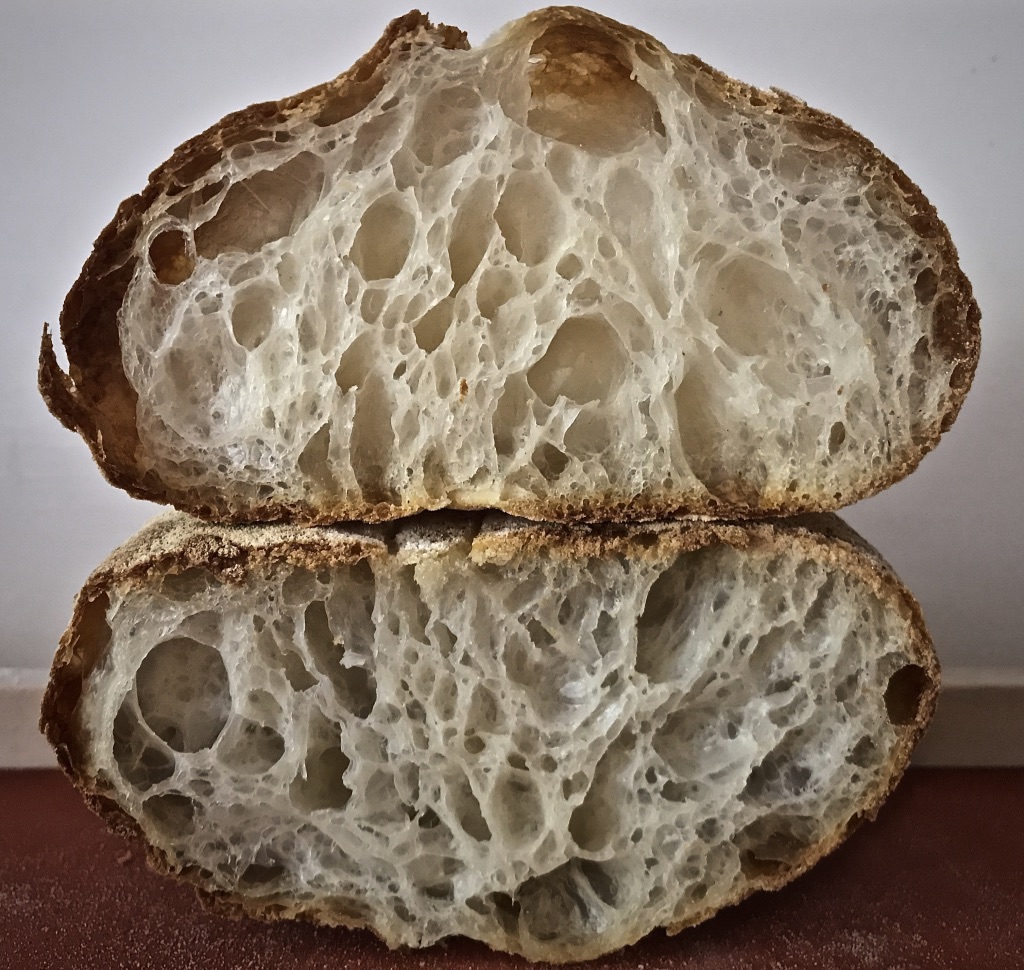 that a dedicated European baker like you wasn't yet aware of this grain.  At least, from my singular driving experience, your trip across the border is quite easy and accessible.  And that particular crossing surprisingly does not have a Border Control, instead of the insane lines as those we experienced coming from Croatia to Slovenia.  Once we crossed into Italy and immediately found ourselves in Villa Opicina, my wife's first comment was "we can finally read the signs again!" =:o).

And no, I don't mind that you posted your magnificent crumb shot here.  It is just a delight to look, and marvel, at.  It just raises the ante for everyone else on TFL!