For the initial two loaves,
see these link:s:

This loaf combined light rye flour and caraway seed with emulsified raisins in the Raisin Yeast Water (RYW). I also made the overall development come very close to the initial loaf's 105 hour development timing, about 106 hours. However, rather than a 45+ hours final dough retard the major retardation was done with the Build-#3 of the 3-build RYW Levain.

This loaf, was baked primarily to test two points: Firstly, was the prolonged final rise a result of the newness of the culture in the initial loaf's levain, or was it the extended retardation periods that most caused the slower final rise?  Secondly, how well would the emulsified RYW flavors work when combined with rye flour (and caraway seed, of course) ? 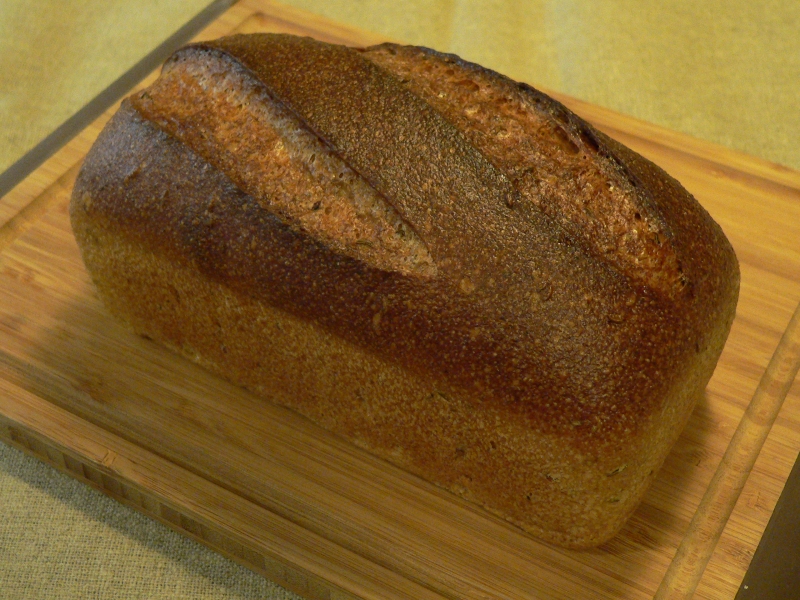 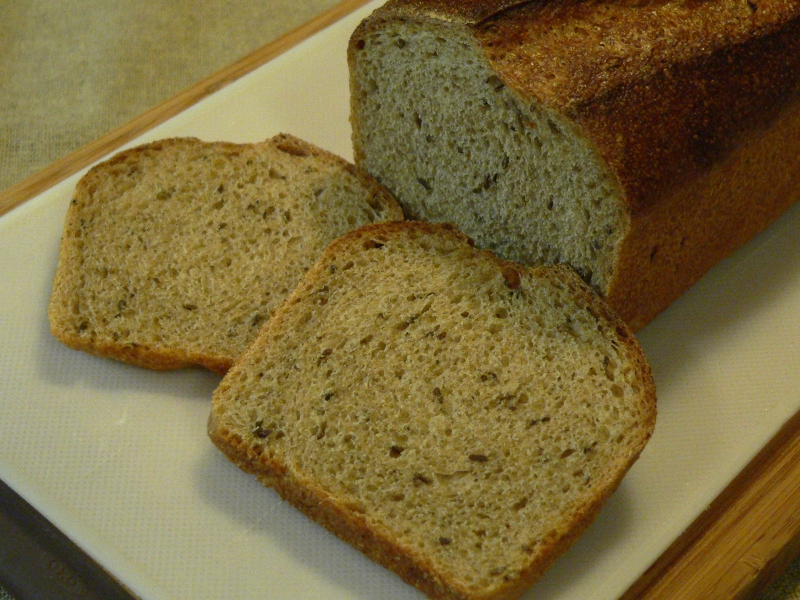 The first and (this) last loaf had development times of 105 and 106 hours, respectively, from start of Build-#1 of the 3-build levain to the dough entering the oven, while the second shorter development loaf was developed over 28½ hours. The long cycled loaves took 10 and 9 hours respectively for final rise, while the short cycle only took 6¼ hours for final rise. Thus, I conclude that the culture's age had little, or nothing to do with the longer rise time, and that extended retardation, be it in the levain builds, or in the final dough, caused the observed increase in final rise's time that were observed. 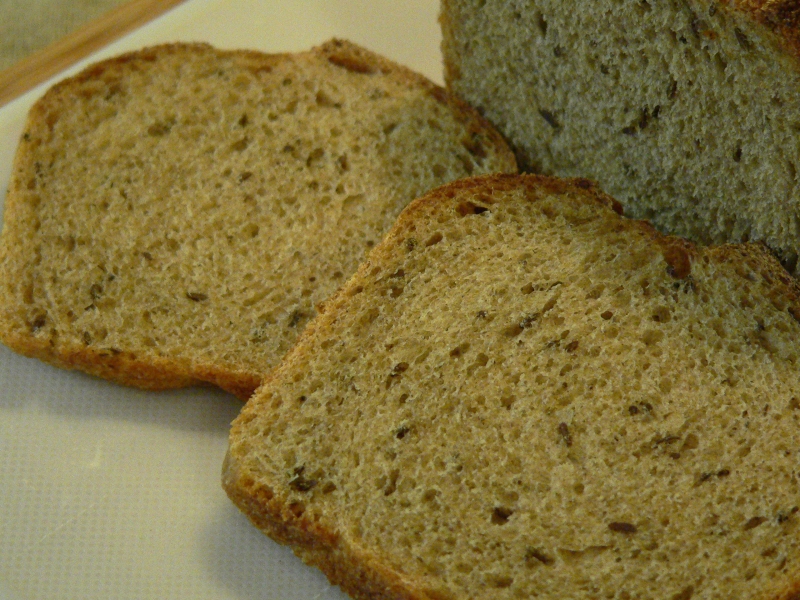 The crumb texture, moistness, and flavor of this final loaf were judged by me to be very good. The Rye and Caraway certainly did nothing to decrease my pleasure with the loaf.

When I next make this combination, I will likely increase the percentage of rye flour and maintain the caraway seed at the 2 B% used here.

These next links are to 3 baking logs in PDF format for this loaf, the initial loaf, and the previous 'replication' loaf.

Update - Added Summary Table of the 3 loaves below: 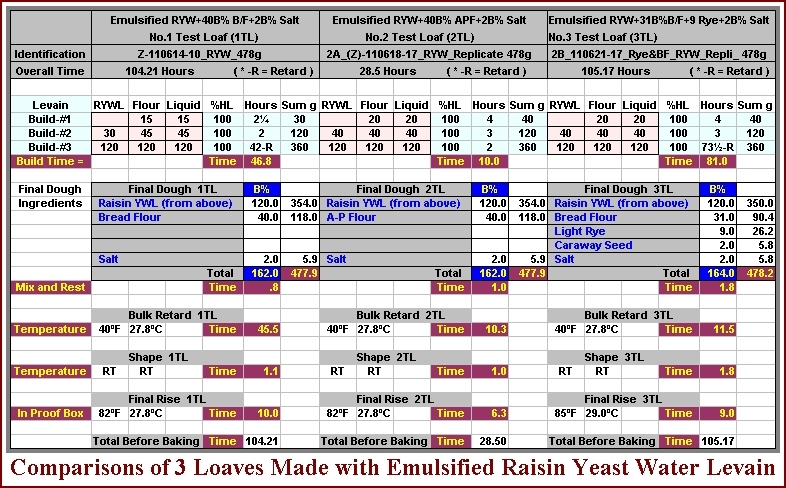 The above table, without a doubt, will have time entry errors of a few percent, but then I would hate being perfect ROFL

More beautiful loaves and thorough write up!  I am impressed as always and also with how wonderful all of your loaves look when baked!  I am more than impressed with your consistent results which speaks well of you methodology...You will note I do not post pictures as I am never sure how one of my loaves will emerge from the oven!  So much for my process of experimentation LOL.

Maybe someday when the limbs are staying put and the children are grown I will be able to emulate what you have done with your loaves.....for now I take notes and am glad the family loves what does come out of my oven despite it's presentation!  LOL

As always, thanks for sharing your process!

Children can be very harsh critics, Janet. If they are eating everything that comes out of the oven, there is a very good chance it taste great. LOL

I forgot to ask one of my questions.....I must be slipping LOL

Yes, children are harsh critics - teenagers even more so.  My oldest did ask why I was making weird shaped loaves.....he was referring to boules and batards....

So my question is -  how do you shape your sandwich loaves?  I imagine you did describe your method in a past thread somewhere so a link would suffice.

Hi, Janet- You are absolutely correct.... Somehow, I missed the question and, of course, you are also correct that I described the method of shaping (many times) in many (most) of the baking logs PDF links. But let me try to be more specific:

That link covers the initial generalities - why I do pan breads, rather than the "3-Bs" -Baguette, Boule, or Batard.

In this post, (above) there are links to three (3) baking logs in PDF format (located on Google Docs).

In each of those three PDFs, you can find and entry saying essentially the same statement - under the "Bulk Rise, Retard, and subsequent Shaping"

Dough was returned to R. Tmp. & allowed to warm back up for an hour, then shaped into a rolled log &
placed in an A7½ oiled pan, food-cover capped and placed in the proof box at a nominal 85ºF/29ºC 9AM

Your answer is that I rolled the stretched dough into a log shape that matches the length of the bread pan and place it in the pan.

She shows how to roll the dough, but puts it in cross-wise in a Pullman Pan. I do the same, but as a single rolled-up log and place it length-wise.

Thanks for your reply Ron.  I have gone back and read the links you provided.  I indeed did miss that information on my first pass.  Was focused on other things at the time.

I love your threads because they are so chock full of info.....I just have to remember to go back over them and re-read because I am always finding some new little gem in them :-)

Janet, the information doesn't mind how often you read it... It has no plans of making any trips, and thus, it should be there anytime you wish to check it again LOL

Daisy, it is strange how different people's taste can be. When people say they dislike caraway, I am always surprised. I suppose that is because I like it so much ;-)

I tried to find ground caraway locally, to no avail, so I had to order online. Unfortunately, it was delayed and I had to use just seed for this loaf. But, I have it now, so I can use a bit of that plus seed next time.

It is a shame we cannot e-mail flavors to each other !

Thank you for the encouraging words ;-)

Lovely crumbs and flavour profile. I love caraway with rye too. I think it lifts the rye flavour and gives the tang hints to bread.

Bow to you for your thorough-planning, time-management and patient. I am sure the loaf will taste very nice with 106 hrs fermentation:)

Sue, I think you are spot on about the caraway enhancement to the rye. Of course, in this loaf it couldn't help the non-existent tang - since the RYW didn't develop a tang. But, when used with SD, it most assuredly does.

I just Updated this post, to include a summary table of all 3 loaves at the very end of the post.  The table is far from perfect, but should make a simple overview of the 3 different development methods I used more easily understood by readers.

I, too, love caraway in my rye breads; not because I like caraway so much, but because I love the taste of rye berries, fresh off the ear. Rye flours have lost the caraway taste of fresh berries. I remember the first time I tasted rye berries from my small field, I was totally surprised that it tasted so much like caraway. I presume the aromatics that we sense as taste are dissipated by the time the rye makes it to the mill. That's a shame.

I haven't tried grinding the caraway seeds, but have thought about it. My current project is to come up with a high percentage rye sandwich bread; one that, as txfarmer puts it, is shreddably soft. The testing will give me ample opportunity to try ground caraway seeds.

Gary, I did not realize that the field fresh rye berries did have a caraway-like flavor. That is very interesting and I thank you for the information.

I will look forward to seeing you post your experimentation of a rye sandwich loaf ;-)

Looks lovely Ron. :)  Your crumb is always consistently even: a testament to your shaping skills.  Nice crust colour, too.