Creature in the crumb
It is not uncommon when using a Yeast Water (YW) to strain out the food portion (vegetable, herb, or fruit) and use only the clear water portion of the culture. When the culture is fed with raisins (Raisin YW, or just RYW) the raisins tend to become empty skins after a few days. Before that, the raisins go through a transition from simple raisin into an alcoholic tasting fruit and as the WBBs consume the insides of the raisins, finally into the empty skins.   Around the second or third day, the raisins make a fine treat to use in raisin bread, or salads, etc. However, by the time that only the skins are left, all the taste that is left is a bitterness of the skin. Thus, if the raisins go through the full cycle, one is left with just another form of discard, and basically a worthless one to strain from the balance of the RYW.   In this test loaf, I tried using everything, but not as any "raisin bread" one would recognize from that name - in taste, nor appearance. 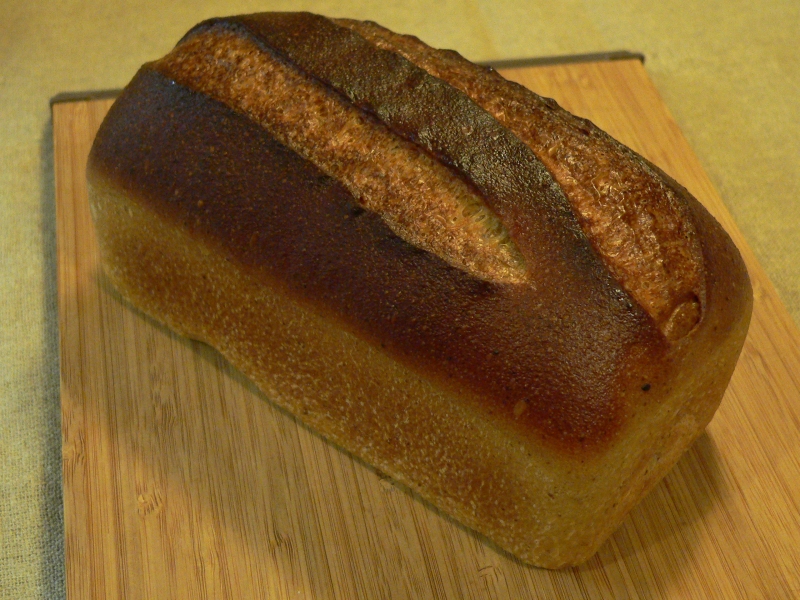 I started a fresh RYW culture, using organic raisins, water, and a jump-start from my stock Apple YW. After 24 hours, I totally emulsified the soften raisins. At 48 hours I used 15g of this very active Raisin YW (RYW) plus 15g KAAP to start Build-#1 of a 3-build RYW levain at 100%HL (hydration Level). Builds #2 & #3 followed and resulted in a total levain of the desired 354g of RYW levain. 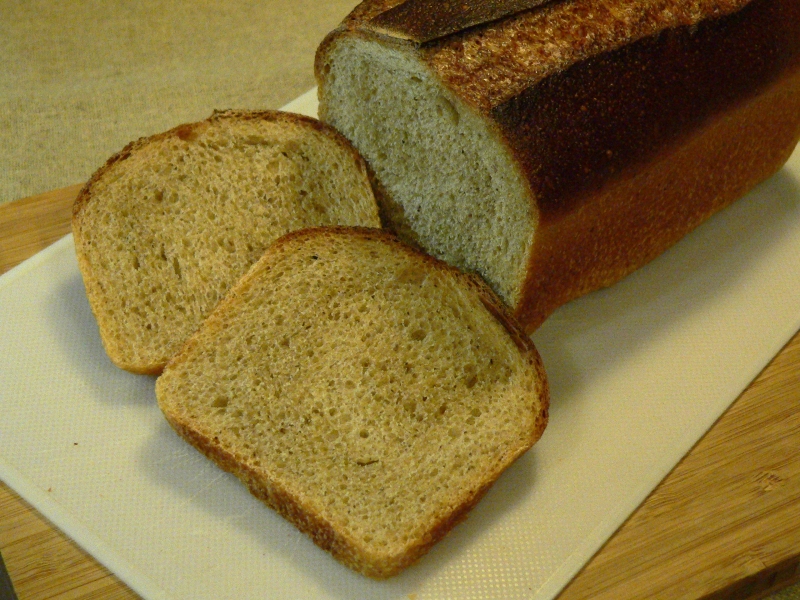 The levain was combined with 118g of bread flour and 2% fine sea salt. Kneaded until a satisfactory windowpane was obtained, and then retarded for just over 45 hours.   After the retardation, the dough was removed from the fridge, allowed to warm up for an hour, and then, shaped in a simple log form and placed in my standard A7½ (7.500” x 3.750” x 2.250”) buttered bread pan. Covered and placed in a proof box at 82ºF ( 27.8º C) for the 10 hour final rise.    The dough top, was scored from each end to make two 80% parallel scores. Place in TP Dutch Oven & 1 cup of boiling water poured on the floor of the DO. DO lid added at once. The cold oven stones removed. The DO placed at the lowest position, and the oven set to the max - 450ºF ( 232º C) for the first 20 minutes of baking.   After 20 minutes, the DO cover was removed The oven was reset to 400ºF ( 204º C), and the door of the oven was cracked open 1/2” (12 mm).  After a total of 45 minutes the loaf        was removed and cooled on a wire rack for about 2 hours before cutting.   I found the variation in the color in the sliced loaf surprising.  I have seen this in other loaves, but not where I knew first hand that the kneading had been over 20 minutes on a Kitchen Aid hook at fourth speed. From the uniformity of the crumb, there can also be no doubt that the levain was well distributed through the dough. Since the total coloration came from the levain, I am left to speculate that the lighter portions of the crumb were colored primarily from the water portion of the levain and the darker areas are the larger raisin portions that were less capable of physical migration through the flour in the final dough mix.   In any event, I fancied I could see a creature in the crumb.  In order that you might more easily see what I refer to, at the lower right hand portion of the next image, I inserted a small marked up copy exaggerating the creature's position. 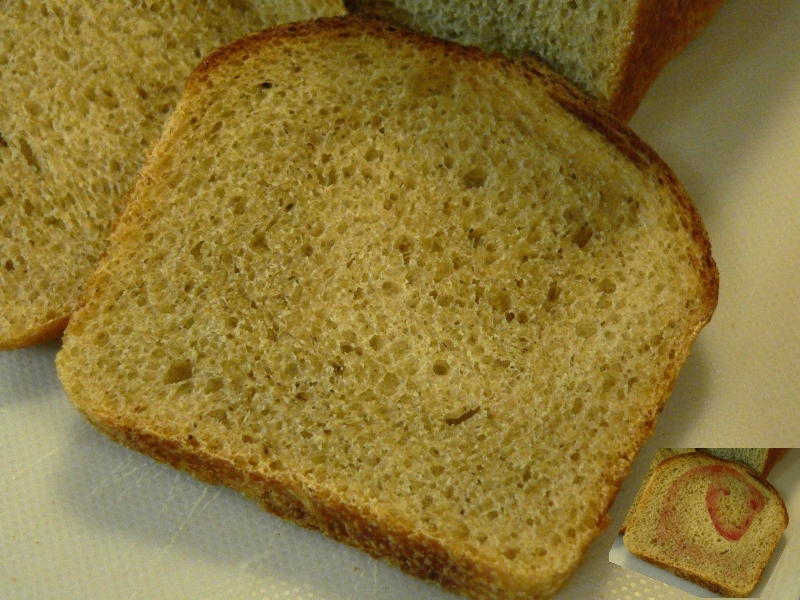 A copy of my baking log is available on Google Docs using this Link:Z-110614-10_RYW_478g [Photos]_110615-1540 .pdf - https://docs.google.com/viewer?a=v&pid=explorer&chrome=true&srcid=0B_MScoZfDZkwMDVmMmVkYWQtNjlmMC00YjVmLTgwMmYtODhlOTM3ZjE4ZDli&hl=en_US
The crumb was softer than would be the case with SD. It also was less open than the last several loaves, excluding the Pullman enriched loaves. It looks as if it were a 30% rye, and could be mistaken in a photo – IMHO.  The flavor is distinctly NOT like, SD, App.YW, Apr.YW, Potato YW, and despite the very dark crust, it is not sweet to my sense of taste.  I believe that the tartness of the emulsified raisin skin, contained in the levain, somewhat offset the sweetness that a strained RYW has.  As fully expected, there was no tang to the flavor, but a very full flavor that seemed more of a wheat than raisin. Indeed, there was no trace of any identifiable raisin flavor. I thought it a very pleasant flavor that might go well in combination with rye, which might be well worth testing.Ron
Share

Lurking creatures aside, that is a very handsome loaf.   I especially like the rich crust colour that is, no doubt, a result of the 48 hour retardation.  So would you recommend emulsifying the skins, or not?

Oh yes, I certainly would, Syd, at least in the time interval I have used. The 'balancing act' (if one can call it that) between the sharpness of the skins and the sweetens of the pulp and the RYW itself, gives it a taste I would call 'rich', for the lack of a better descriptor.

That is another very nice loaf, Ron!   I like the crust color too!  I also like the crumb. I know how tasty it is with emulsifying the soften raisins.  Some may not like the color, but I go for the taste!

I like your explanation of the taste of bread you describe as always.  It is very precise and I can taste in my imagination! :)

Thank you Akiko. You certainly know the RYW far better than anyone else I know, so I am please if you think the taste fits my description.

You have done it again.  Another wonderful loaf that, due to the lurking dinosaur contained within, will be hard to beat in your next YW adventure.

Needless to say I am impressed :^)

Dinosaurs may be on their way back, so keep your eyes open when you go out in the yard :D

It's intriguing to see you experimenting with yeast water, and see how different it comes to SD in terms of flavor!

txfarmer, I think we both enjoy experimentation LOL  However, your results are always aesthetically more pleasing to my eyes - Of course, there is no way to know about the taste level, but I'll guess we both are having fun ;-)

I saw the great compliment you received from the 'French quarter', and it was certainly well deserved in my opinion!

Following your instructions, I emulsified the RYW  and  have a very nice loaf, too. Baked as a round loaf on baking stone.  Added a few fresh raisins, per DH request.

Sorry I'm a luddite when it comes to taking photos, but will attempt that with the next loaf.

I am glad you enjoyed your loaf, and hope you have many more that are just as pleasing for you.

Never heard that one, please define.

Many consider King Aurthur All Purpose flour one of the best.

Hey RonRay! I guess we both took a long break.  Still baking with your wee beasties?

The wee beasties are safe from me these days. The availability of a good sourdough in my area freed me to just play Skyrim and create for my own enjoyment additions to the game (^_^)

Well, I and the wee beasties have missed you.  Good to know you are still online. Take care. Pamela