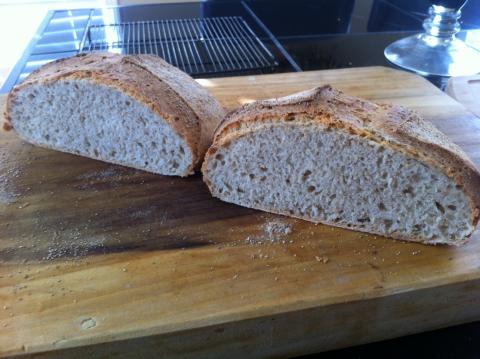 I didn't know I couldn't post more than 1 pic for a blog entry. D'oh.

Here is a pic of the crumb of Loaf #1 (there were 2 loaves from the batch of dough). 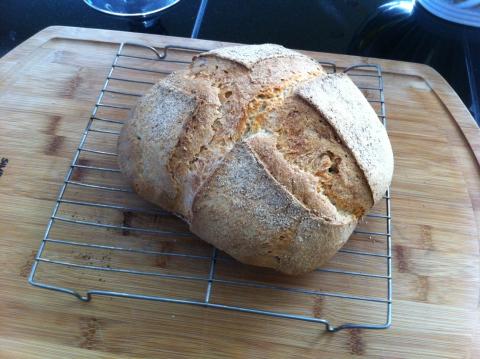 As I mentioned previously I decided to try "My Daily Bread"  with SD starter instead of packaged yeast. So I added 1 cup of fed starter to 1 cup unbleached AP flour and 1 cup of filtered water to make a "poolish" (I used quotes because I'm not sure what to call it when using SD starter). I let it ferment at room temperature overnight, and then proceeded to use 8 ounces of filtered water and enough flour to make a slightly sticky dough (I did not record the amount of flour used so I don't know the hydration, but it definitely is less than the 70% used in many SD recipes posted on TFL). I kneaded the mixture with my Kitchen Aid for 5 minutes at "1" with the dough hook, let it rest for 15 minutes, then kneaded again for 5 minutes with the KA at "1." I let it ferment at room temperature for about 6 or 7 hours, then put it in the refrigerator overnight. Yesterday evening I split the dough ball in half and formed 2 boules, put each boule on a piece of baking parchment, and let them rise overnight at room temperature. I baked them both this morning by preheating the oven (with a stone and a metal pan of water) to 550 F, slashing the loaf with a "+" and then baking the loaf for 15 minutes at 550 F then 10 minutes at 475 F. Final bread temperature was 212 F for loaf #1 and 208 F for loaf #2.

Oven spring was OK, shape of each loaf was a little wonky ... each dough ball formed a thin dry skin on the surface and it looked like the dough was rising unevenly as a result. Crumb development was OK but not great (not a big surprise considering the hydration was low (at least lower than 70%)). I took off a thin slice and tasted it, tastes pretty good but we'll see how the flavor develops over the next day or two. I think the pics are a bit deceiving as the crumb seems slightly dense to me.

I can see how the higher hydration leads to such a spectacular crumb ... I am thinking that in addition to poor gluten development in my SD loaves, the higher hydration doughs are a bit more fragile and prone to "deflation" while being handled after the final rise. I think I can handle that, now that I've learned a bit. 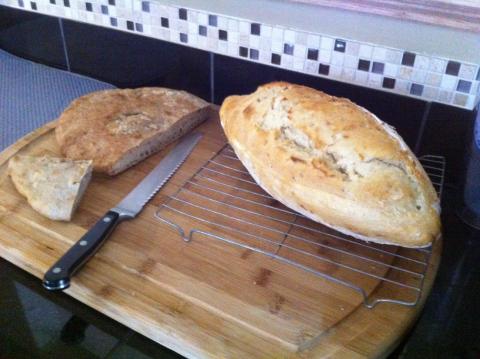 Here is a pic I took this past Sunday.

On the left are failed attempts at Dave Snyder's SFSD and SJSD. I suspect it has to do with inadequate gluten development. Starter could be off but I've been able to work it up to the point where it will double in 3 to 4 hours ... we'll see.

Loaf on the right is "My Daily Bread" baked in a gas-fired oven, with a pizza stone, with a metal bowl of water, at 550deg F, until an internal temperature of 205 deg F was attained. Appears to have come out well, which I suspect has to do with 1) sufficient kneading (I used my Kitchen Aid), and 2) a tad lower hydration. SWMBO decided we'd save it for Thanksgiving, so any crumb pictures will have to wait.

As you can see it had quite a bit of oven spring, so I'm fairly certain that it was a bit underproofed when it went into the oven.

I've decided to try a version of MDB using starter (instead of packaged yeast) for the poolish...