I've tried to make baguettes a few times, and the results have been consistently sad. The first couple of times I basically just got crackers. Then the recent couple of attempts were a tad better, but still not really baguettes!

The last time I thought everything would be better. I moved to a new flat with an oven that seems to trap steam much better. I have acquired a pizza steel, which I thought would be a big improvement over a baking tray. And while the result was edible and tasty, it was not baguettes.

I followed Maurizio's recipe as closely as I could, except scaled down to just two baguettes, since the experience has taught me I would likely be disappointed: https://www.theperfectloaf.com/sourdough-baguettes/

The result was generally flat, with closed crumb, and they puffed up like a balloon on the bottom of the breads. I've seen beautiful baguette produced by the bakers here, and thought maybe someone would have some advice to share, how I can move forward from these disappointing results I keep getting? 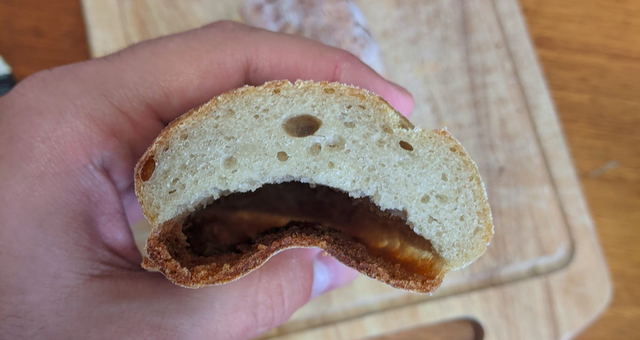 There are plenty of ideas on baguettes in this post.http://www.thefreshloaf.com/node/64622/community-bake-baguettes-alfanso

Thanks! I am just intimidated by such amazing bakes there that feel like my troubleshooting of failed baguettes has nothing to do with the fine optimization of beautiful open crumb breads displayed there :)

The baguette project is all about baking great baguettes. All Community Bakes are about learning together to bake better breads. No one should feel “unqualified” or intimidated. The Community Bakes (CB) are a vehicle for learning and are never intended to be a competition. When the bake started only Alfanso and MTLoaf were established baguette bakers.  Now, both Benny and Doc.Dough are producing “Master Quality” baguettes!

If you decide to join, post images and lots of detailed information. You are certain to get help...

Feel free the use any recipe/formula that you wish. I can say that Alfanso’s original formula is a great place to start. That particular formula produces a dough that is excellent for scoring.

Ok, thank you Danny, I will join the discussion there for the next baguette bake I attempt!

Ilya, one of the most interesting things we discovered during the Baguette CB was Bulk Fermenting 20-30% increase in rise. Many of us used an Aliquot Jar to gauge the percentage of rise. It seems counterintuitive, but time after time it has been proven to work.

See THIS LINK for information about the Aliquot Jar.

Great, thanks! I'll be sure to use it next time.

Photos look like you are using a convection oven, or a pizza oven with an upper heating element.

"puffed up like a balloon on the bottom of the bread" is another clue pointing to upper-heat and/or convection.

Benito bakes his baguettes on steel, so hopefully he will chime in. (AFAIK, he has a convection oven, but bakes with only bottom heat and fan off.)

as someone else wrote: upper heat kills bread.

shaping and scoring are excellent.

Ohhh I didn't know that about upper heat! I don't switch on the convection fan, but I do use the upper heating element - but can switch it off next time!

the only time  to use the upper heating element (on a bare/uncovered loaf)  is for a minute or two at the end of a bake to get a darker crust. Barryvabeach has experience in that, and wrote a good explanation.

And the money quote:

"- top elements are loaf killers.  They need to be shut off long before your loaf goes in.  I would say 20+ minutes prior.  If you bake a loaf with them on, it will be a smooth football or torpedo.  If they come on even for a minute at the critical spring stage, it's game over.  Beware of top elements !"

If you don't want to keep fiddling/adjusting exactly when to turn off upper heat during the pre-heat phase, just don't use it at all.

That is interesting, thank you! I have always been using both top and bottom elements, and haven't observed bad effects. However I only tried baking a loaf uncovered from the beginning once - and it worked fine, actually. In my ovens, both old and current, the top element is not exposed, so perhaps the metal between it and the oven really reduces these fluctuations and radiant heating.

I did try to brown loafs ones with the grill element on the top, and that worked really quickly, similarly to the descriptions above. I will certainly try only using the bottom element in the next bakes though!

Actually, I also put a baking tray between the steel and the upper element to reduce the effective volume that needs to be steamed, but I preheated it together with the steel, so I guess it would function as top heat.

Ilya, I’ll reiterate what Dan said about the community bake, it is there to help bakers improve their baguette baking.  Most of us were first time bakers or at least still needing to improve our baguette baking when we joined the CB.  Those of us who are still posting there have spent months and dozens of bakes to get where we are now.  We would welcome some new blood there to help improve.  We have learned a lot from each other and are happy to share with those still wanting to learn about baguettes.

Regarding a baking steel, I had some help from Doc.Dough with getting my set up to work.  The steel is super hot but can scorch the bottom crust.  What I’ve figured out with some help to avoid the burning is to place the baking steel on my roasting rack which I stuff full of crumpled aluminum foil.  This prevents the scorching of the bottom crust quite effectively.  It took some time to figure that out.  I never use the upper elements when I bake bread including baguettes.  I also don’t use convection during steaming unless the dough is in a dutch oven.  Once the steaming is over then I’ll turn on convection to get a more even browning.

My first baguettes were pretty bad as were my third which were worse than my first. 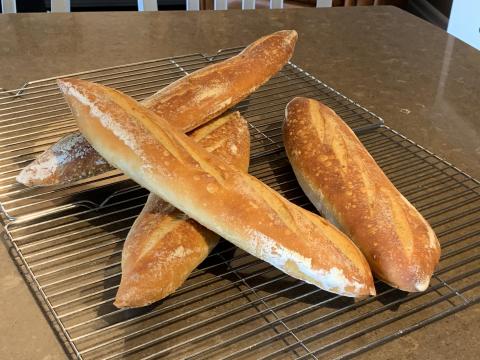 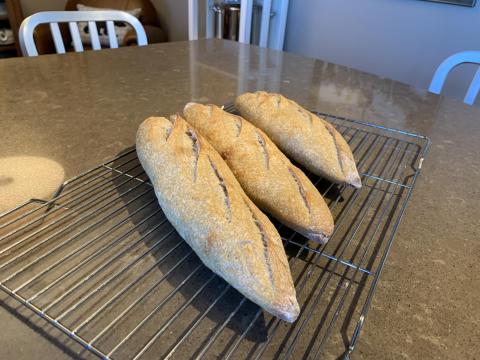 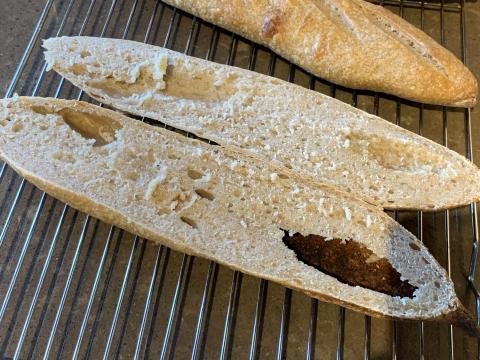 We all have to start somewhere and unfortunately with baguettes the start is often rough, but with some help they are improve immensely.

Come hither all ye who think we were born baguette bakers!  If you haven't baked a bad baguette you haven't been baking them for a long enough time!  An early attempt (but at least I had an ear!)... 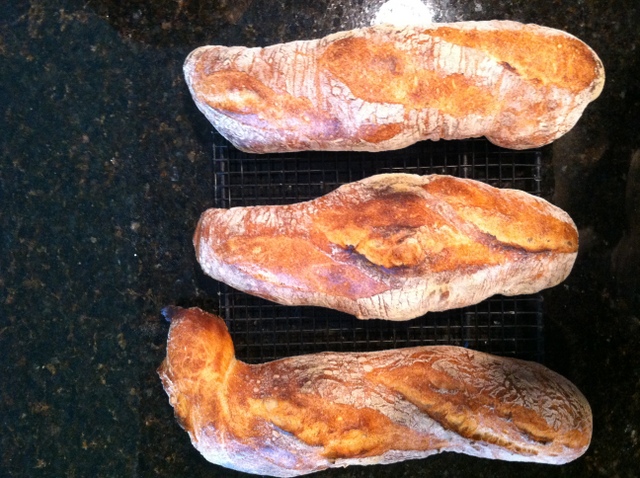 Unless you were born with golden hands and an aptitude of 10, you will have some struggles along the way.  It may be best to find accomplishment with other bread forms like somewhat elongated batards that can also display some oven spring, or you may the experience initially proves frustrating.

But that is no reason to put off learning the craft.  Please don't compare yourself to the accomplished baguetteers in the CB, some of whom were putting out and posting as many as 6-7 bakes a week at points.  That may create a "can't do" attitude.  As Dan's post states, it isn't about competition, but rather about learning.

Thank you, and Benny, so much. I continue to be amazed how welcoming and kind this community is.

This is all a conspiracy!

Alan, you had an ear from the first bake which is super impressive.  I had a cylindrical shape!  As everyone knows in the CB I struggled with ears for many many many bakes.  Thank goodness for the group effort and figuring out bulk less!!  At least for me bulk less equated to better ears and oven spring.  So much shared learned knowledge.

So anyone remotely interested in doing baguettes should join us Community Bake Baguettes Alfanso.

I have sympathy with Ilya regarding the Baguette Community Bake. There is of course a wealth of useful information in there, but it is spread over seven pages and probably includes hundreds of posts! It's a bit like when you go to pizzamaking.com and find an interesting thread and then realise that there are 20 pages to work your way through!

Ilya, I know you've already had good advice about oven heat, baking steels and % rise, but for a recipe I would have a look at the BBGA Team USA formula. I've found it to be reliable and I know professional baker and TFL member Jimbtv recommends it highly. In fact he posts it on the first page of the CB.

Thank you Lance! Indeed, the CB is huge, with so much going on, it's difficult to get through all info.

Re the recipe: I might try it, but I'd need to buy both diastatic malt (not sure where to get it around here at the moment, but wanted to try it anyway, lads of recipes use malted flour or added malt, curious to see what it does), and the yeast, actually! I've been baking just purely sourdough bread, although don't have anything against commercial yeast.

and Lance's recommendation is a good one.  It requires two preferments, one of which is with commercial yeast.

If you wish to stick with strictly a levain formula here are two excellent simple doughs along with the formula for each...

The AP flour used here already has malted barley (diastatic) mixed in, so searching for it won't be necessary if your flours across the pond have a similar characteristic.

Your selection, of course, and you can't go wrong with any of the three, although the BBGA is more complex given the second preferment.

Just wanted to thank Benito and Alfanso for the photos.  Lately,  I think many look at countless photos from instagram and other sources of fantastic looking breads, with not a photo of anything less than perfect, and so they get intimidated.   It is refreshing to see photos of breads that are less than ideal.

I went for the formula in the first post of the CB for now (which is very similar to the second one here, I think?).

The flours here don't include any malt unless explicitly specified, and none of the flours I have, have it. I am just hoping it's not an essential ingredient! And there isn't any AP flour here either - there is plain flour with <10% protein, and then bread flour with >12% protein. The specific bread flour I use from a local farm/mill is 12.3%. Should I add a little plain flour to reduce the protein content?

Which mill is your flour coming from Ilya? Is it roller milled (I hope so).

My bread flour (12.3% protein), whole wheat flour (I tend to buy the extra strong one, 13.3% protein) and whole rye flour are from Mongoswells https://www.mungoswells.co.uk/.

It's not stone ground, so I assume roller milled?

You will soon join the obsessed few on this forum who've been cursed with the struggle to chase down the elusive perfect baguette.  Looks like slam dunk when you view photos of them online but truth is they are hard loaves to do well.  Even when you knock out a really good bake you will just look further ahead to even better ones.  So long as you understsnd that it takes many a loaf to really understand its mysteries will you eventually be annointed as part of the brigade that really is the heart and soul of this forum.  boules and batards, I blow my nose at you ! This is the holy grail.  now wage war on your loaves !