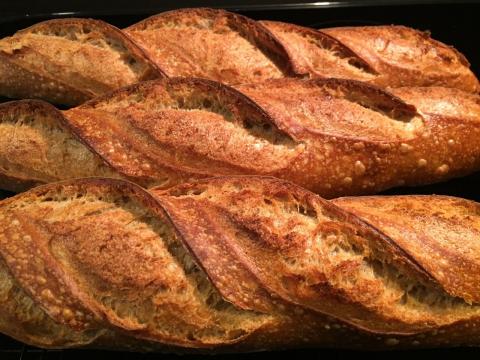 If you are new to SD baking and still having problems with high hydration and complicated doughs, don't get your knickers all in a knot.  Instead drop the hydration down and get a solid footing with lower hydration breads first.  Although these are baguettes, the dough can easily be adapted to batards or boules.  So...

Two easy formulas that I recommend for you to get that feeling of accomplishment and dough handling skills are:

Make these in whatever shape you wish and feel an instant accomplishment and surety as another step to moving up the hydration ladder. 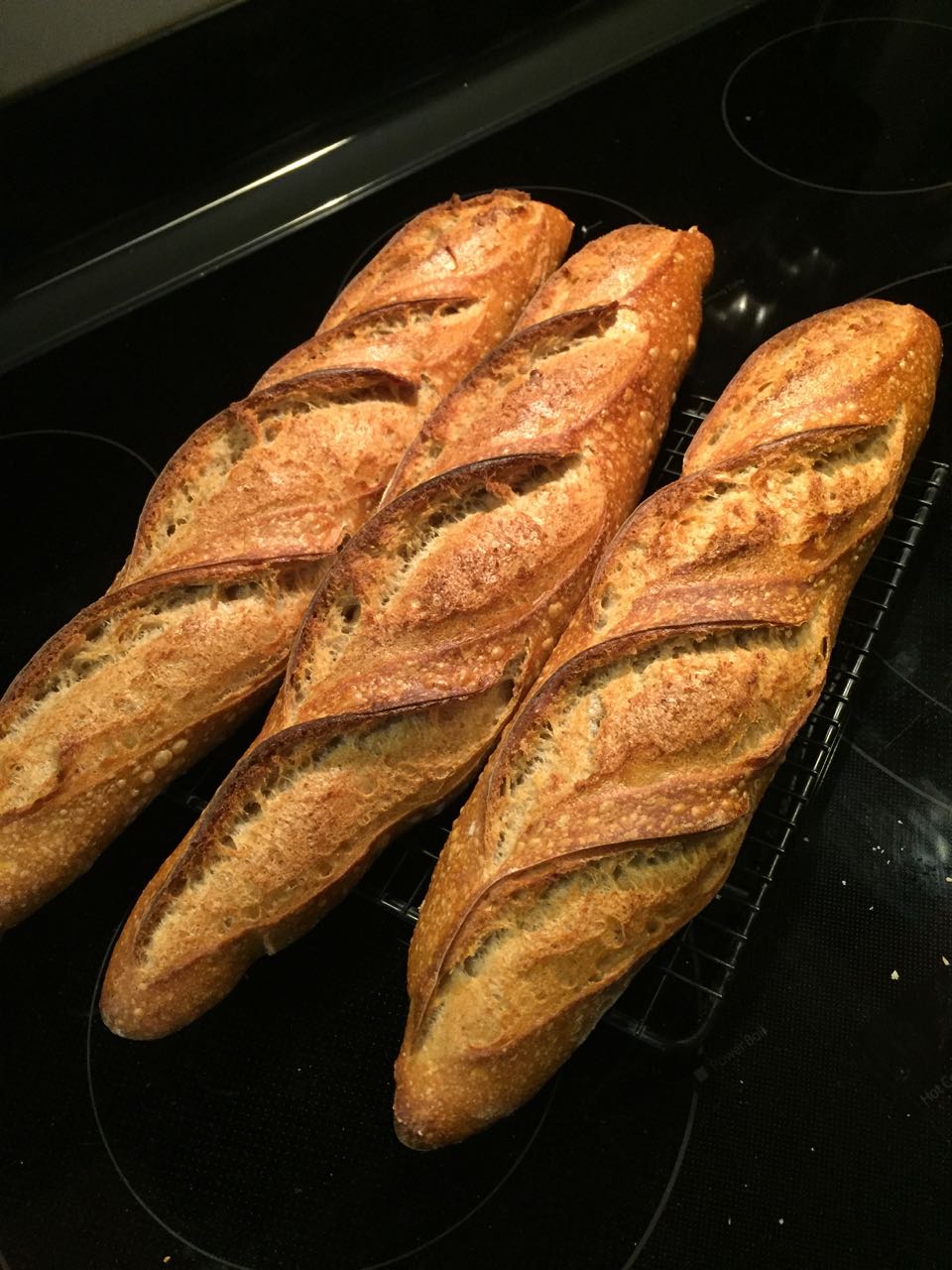 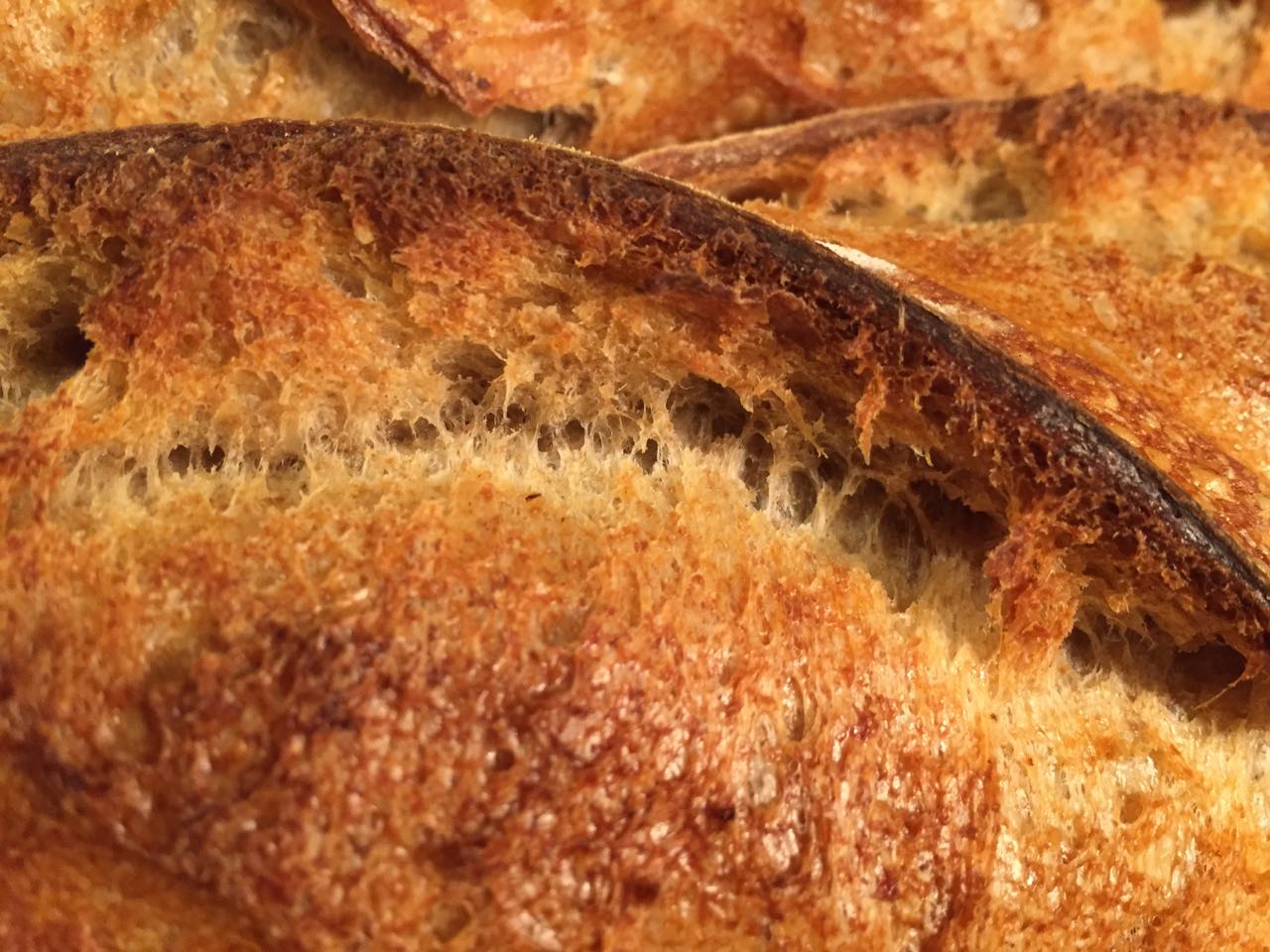 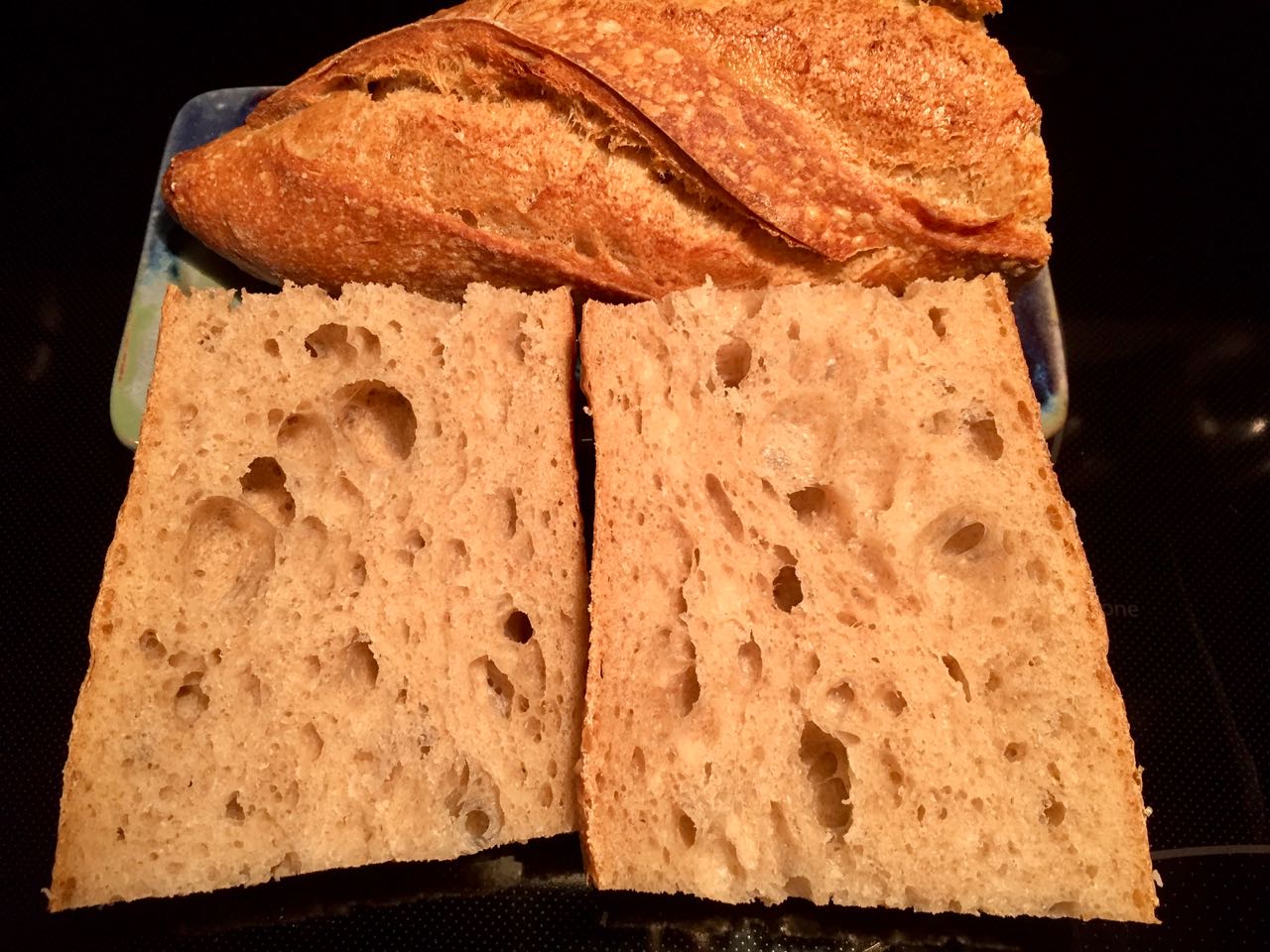 Such beautiful bread!  Those ears are stunning.

This is a can't miss formula and I'm pretty consistent with the scoring of my baguettes, regardless of the formula, with a few exceptions ;-) ...

Alan, that looks like a great place to start for use beginners for baguettes.  Out of curiosity, what is the finished length of the resulting baguettes with this 410 g weight each?

For those of us without a peel, could I transfer from the couche to a cookie tray with parchment and bake on that tray on a baking steel?

which is the length of my jelly roll pan and depth of the oven.  410g is a bit on the either too heavy or too light side for these.  Coming in somewhere between a baguette type of bread and a batard.

I don't have a true oven peel either and also use a cookie tray.  The one difference from what you outline is that I slide the parchment with dough off the peel and into the oven.  You can see the whole process here.

With the exception of an IDY dough like the Bouabsa at 75% hydration my recommendation, as above ,is to start with something below 70%.  Thanks to the popularity Tartine and Forkish style breads, I guess, most folks want to "master" higher hydration doughs without going through the step-at-a-time process of understanding dough handling better.  To each his own, of course, and it isn't my place to say what anyone else should or shouldn't do.  But I see an awful lot of posts on TFL these days with frustrated newcomers.  I can only express my semi-learned opinion and leave it at that.

Extremely useful practical video Alan.  I should be able to replicate something close to that with what I have, except that I might have to use the backside of my cookie tray to transfer the baguettes to the baking steel.  One thing that might hinder my success at this point is the fact that my oven seems to vent when it is on, no idea how to turn that off, but I think that caused me problems with oven spring in the past when I used to bake without the dutch oven.  I’m not sure that I’ll be able to overcome that, but I will try.

I have no issue with starting with lower hydration and intend to start that way.  I’m still not great with high hydration with batards so don’t want to run into those issues with baguettes right off the top.

I do like that you oil your lame before scoring, I’ve never tried that but it makes sense, I’ve only recently tried dipping it into water, but oil would probably be even better.

"and this lovely bread, Jeffrey Hamelman Pain au Levain with WW at 68% hydration."

68% has been my favorite hydration for a long time. Especially in the summer, I prefer working with lower hydration. Now with the lack of bread flour in the market, I also stick to lower hydration, typically 68%.

And at 25% whole grains, that's about in my comfort zone.   My formula book was getting to be on the unwieldy side.  I decided to take my favorites and place them up front for easier access.  Both breads in the text are up front.

The popularity of Tartine has convinced a lot of new bakers that high hydration is the answer. (When really it’s probably the last thing you need as a beginning baker - especially with sourdough!)

It's the "flavor" of the month, but for a decade or more now.  I certainly have nothing against high hydration doughs, but they just seem to be the cat's meow with so many starry-eyed new bakers.  And with the dominance of Dutch Oven baking, it seems to be one way to obtain those goals.

"Essential" to keep in any baker's arsenal as I also maintain them in mine, but the emphasis on them and getting open crumb large enough for a mouse to fall through, just isn't what early learning bakers should be aiming for.

At least that's one chipmunk's opinion.

I agree that jumping headfirst into open crumb end of the pool before you can swim leads to trouble. I have found hydration to be a relative number depending on factors like the flour we use and where we live. My environment is a dry, high desert using a locally grown higher protein flour, other bakers work on the opposite end of that spectrum. Their 68% is not the same as mine. Hammelmans 2nd edition upped the water content in some of his recipes because he underestimated the abilities of bakers to handle a wetter dough. I heard him talk about the ideal hydration in the recent episode of their baking show. The goal should be to find that elusive point of the proper amount of water for the flour and the ability of the baker to work with it.

Nice bake by the way.

Alan, I’m interested in trying the baguettes at the end of this week, but I’ve never done a 2 stage levain, can you explain how this 2 stage levain build works?  Are you building the stage 1, letting it mature, then once mature just adding the stage two components and then letting them mature then using 228.2 g in the autolyse.  What temperature are you fermenting the starter at and approximately how long are you starting the starter prior to autolyse?

differing ways, of course.  And what you wrote is exactly how it is intended as written, although not what i actually do.

There are also a number of folks who opt for a 3 stage set of builds, and I think that it is more of a professional baker thing to do.  And when they do, I believe that they have a different method, going from really small first and second builds to a really big third build.  Chad Roberston and Ken Forkish to name just two.

Now, I'm fairly unconventional.  I keep a vat of a few hundred grams of AP levain in the refrigerator - you may recall my recent post about not having refreshed it for a number of weeks and scooping directly out of that.  When I feel as though I want to or need to refresh (not do builds) I'l just scale some round number amount and then do a 1:1:1 or 1 : 1.5 : 1.5 or 1:2:2 .  I'm not picky as I just want enough goop to have sufficient amount for a next dough, whether that day or another.  I could never get away with this scheme in a real world bakery environment.  I'd be run out of town on a rail.

Thank you, and yes I remember now that you’re a bit unconventional, but we all figure out eventually what works for each of us.

Alan, at what temperature do you bulk ferment at?  Also what increase in volume are you aiming for during bulk fermentation.

I’m going to make each Demi-baguette 300 g to better fit on my baking steel.

I don't pay attention to the DDT after mixing.  My apartment is a relatively constant 78dF give or take 2 degrees.  As I mix by hand, I don't consider the temperature rise that mixing friction creates.  The dough rests on my countertop between every French Fold and during the 5 minute rest between sets of folds, so the counter itself is also a contributor to the ambient temperature.

I pay no attention to the rise in the dough.  In complete opposition to the vast majority on TFL, I watch the clock, not the dough (gasp).  I couldn't even tell you how much it rises, but when I do countertop letter folds the tactile feel of the dough informs me of how it has been progressing.

I take the dough out of retard less than 5 minutes before I score it and place it in the oven.  I only follow the "rules" as far as the amounts of ingredients go, and then not always.  For example, I know that high hydration doughs do not do well in my hands when forming baguettes (Bouabsa exclude, for one), so I'll lower the hydration. a few clicks.

Well, I hope that clarifies things for you ;-) .

Actually it does help to know your room temperature, it is what I will do BF at then.  Thank you Alan.