Dough rising too much before going in the oven?

Dough rising too much before going in the oven?

I've picked up sourdough baking since lockdown and have had some great loaves and some not great loaves. Recently I changed my method to include an overnight proof in the fridge which ended up with two great loaves, then the most recent one turned out a bit odd.

Method (loosely based on Chad Robertson's method from his Tartine book):
- Fed starter 1:1:1 in the morning around 9am
- At around 1.45pm when starter had more than doubled, mixed with water and flour and autolyse for 40 mins
- At around 2.30pm mixed in salt and started the bulk ferment for around 5hrs with a stretch & fold every 30 mins. I kept the dough in a makeshift proofing box (my oven with a small bowl of boiling water) during the ferment.
- At around 7pm the dough was very light and aerated, had increased in size (maybe doubled?) so I took it out for the preshape and 20 mins bench rest. During the bench rest the dough did spread out quite significantly, although it did maintain reasonably rounded edges.
- The final shape didn't got too well, the dough was slightly sliding off itself as I was shaping it and I accidentally tore the surface as I was rolling it into a batard.
- Put the dough into a oval banneton and into the fridge for an overnight final rise (about 12.5 hrs)
- Baked the next morning around 9am at 250°C in a dutch oven for 23mins with lid on and 23 mins with lid off at 230°C.

My issue is that I think the dough rose quite significantly during both the bulk ferment and the final rise, which seems like it may have affected the oven spring? (Although I'm sure the shoddy shaping didn't help). As you can see from the pic the loaf has no ear. It also hasn't maintained its shape particularly well, I did notice that the dough was spreading out quite quickly as I was scoring it before going in the oven. I haven't sliced it open yet but I think the crumb will be fine as it's risen quite significantly during the fermentation stage. Should I be reducing the bulk ferment / final rise time to improve the oven spring? Was thinking about trying this method again but maybe dropping the hydration a bit. Any tips greatly appreciated, thanks! 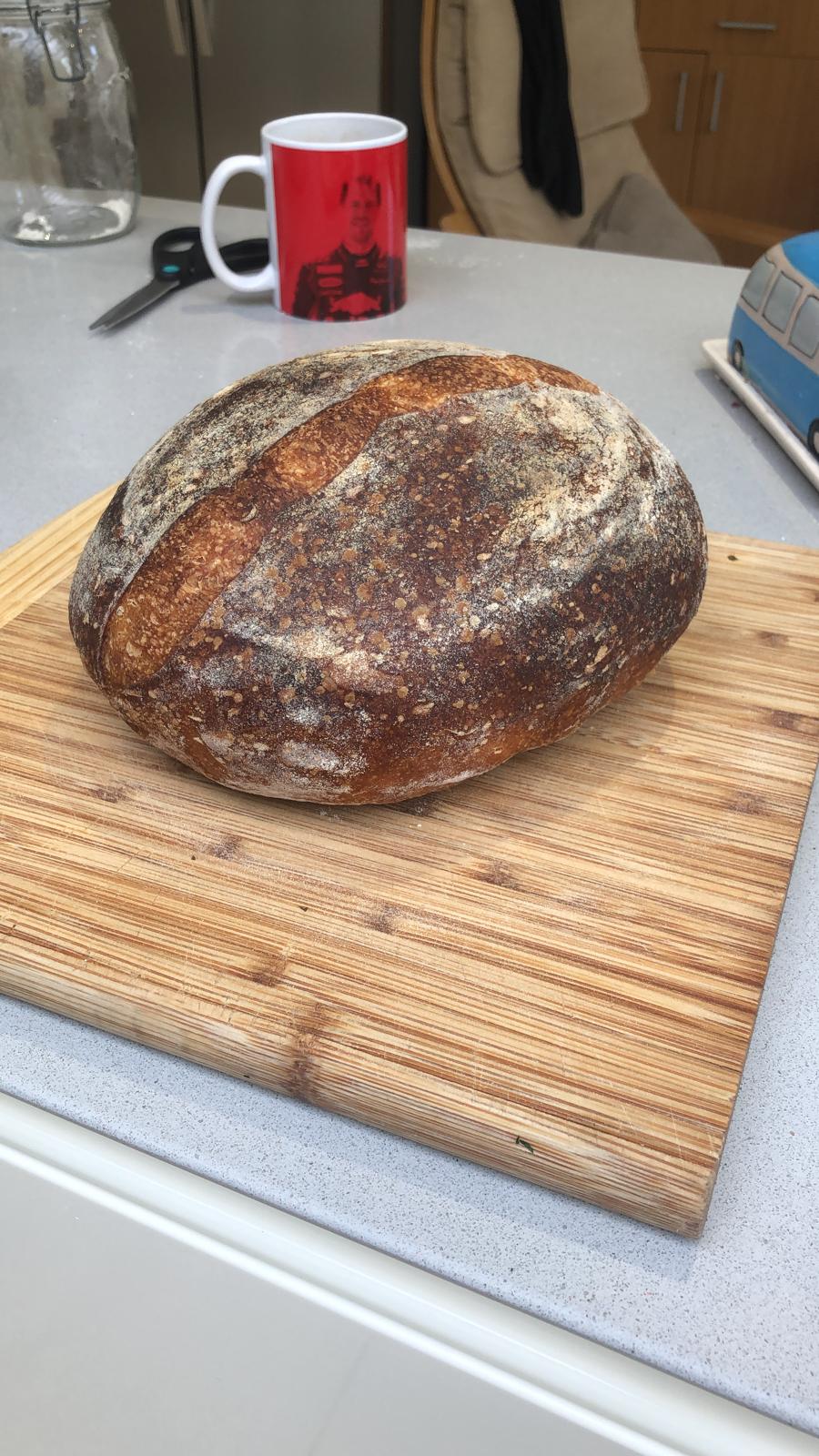 Update: just sliced into it and the crumb seems alright? Quite even and it's really airy and light 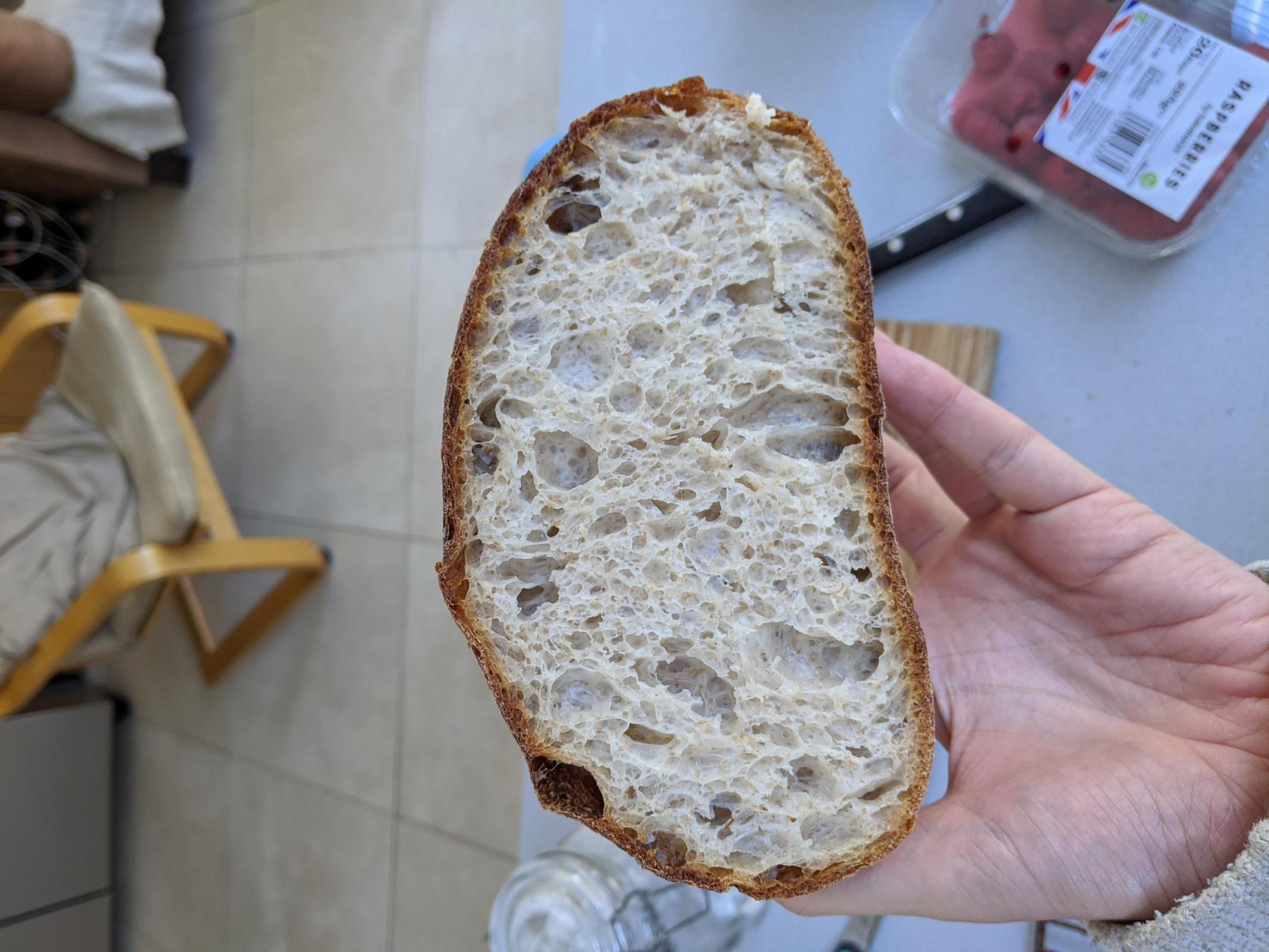 Maybe bump that down to 75% next time.  The crust does sort of indicate too much humidity in the dutch oven.

and yes, slightly less fermenting/proofing may help oven spring.  But change just one variable at a time.

thanks for your reply, will give those a try. out of interest, what is it about the crust that indicates too much humidity?

combination of the grigne (expansion) is smooth, crust is smooth and the laid down ears.

Though those can also be signs of too much heat coming from above.  It's kind of a "fuzzy logic" that I've picked up, and it's inexact.

And welcome to TFL!

Ah I actually thought that my oven might not be hot enough, the door doesn't seal too well so I kinda assumed some heat was escaping. Looks like it is a convection oven though so maybe that was the case. I tried lowering hydration down to 75% for the next loaf which came out reasonably well, definitely less airy than the previous one but I think that might also be down to a shorter bulk fermentation as I had rush out, so I gave it a quick shape and into the fridge for overnight chill. Trying same hydration again today but longer bulk fermentation. Thanks for your help!

I think your sourdough looks great. I'd be very happy with that.

Haha thank you, it tasted nice! Certainly not too disappointed with it, I guess i'm just looking for a slightly prettier loaf from the outside and understand what factors caused it to look the way it did

My rule for a successful bread is one which is tasty and gets eaten up. Yours certainly looks delicious.

Sounds like it's quite a high hydration dough which caused an issue in shaping. For a dough to open up nicely everything needs to fall in place. Getting the ferment just right, shaping, final proofing and scoring (scoring can ruin a rise if not done well).

So first things first why not drop the hydration for now and slowly work your way up once the issues have been solved. What is also effective is proofing seam side down so the seam acts like a natural scoring. If you aren't scoring correctly this is a way which you don't have to score, has a nice rustic natural look to it and it'll help you to see atleast if that was the problem. Should it rise better doing it this way then you know you need to work on the scoring.

If you think the dough has over proofed then better to not score as while it helps the dough to expand more evenly and controlled if done when over proofed it'll just lose the little strength it did have left for oven spring. However your bread opened up but it spread instead of rising producing an ear which suggests scoring might be the issue as supposed to over proofing. Or perhaps a bit of both. But we nitpick. Scoring doesn't have to result in an ear and at the end of the day it's how you like it.

A few things to consider.

I tried lowering hydration down to 75% for the next loaf which came out reasonably well, better oven spring, definitely less airy than the previous one but I think that might also be down to a shorter bulk fermentation as I had rush out, so I gave it a quick shape and into the fridge for overnight chill. Trying same hydration again today but longer bulk fermentation.

That's interesting about using the seam as a natural score, never come across that before. Will certainly give that a try sometime soon.

Thanks for your help!