I'm desperately in need of some help with my doughnut dough. I'm using a brioche type dough to make these doughnuts, and it was working fine previously, but the last few times the dough is just not frying right. It's almost like it is melting in the oil, please see pictures attached. I've tried making some boule and bullseye doughnuts. The bullseye look more like mushrooms, whereas previously they fried perfectly. Boules are just super blistery, and then kind of fall flat when they cool. Is there something that is obviously wrong here without having to go into details of the recipe & my process?.. 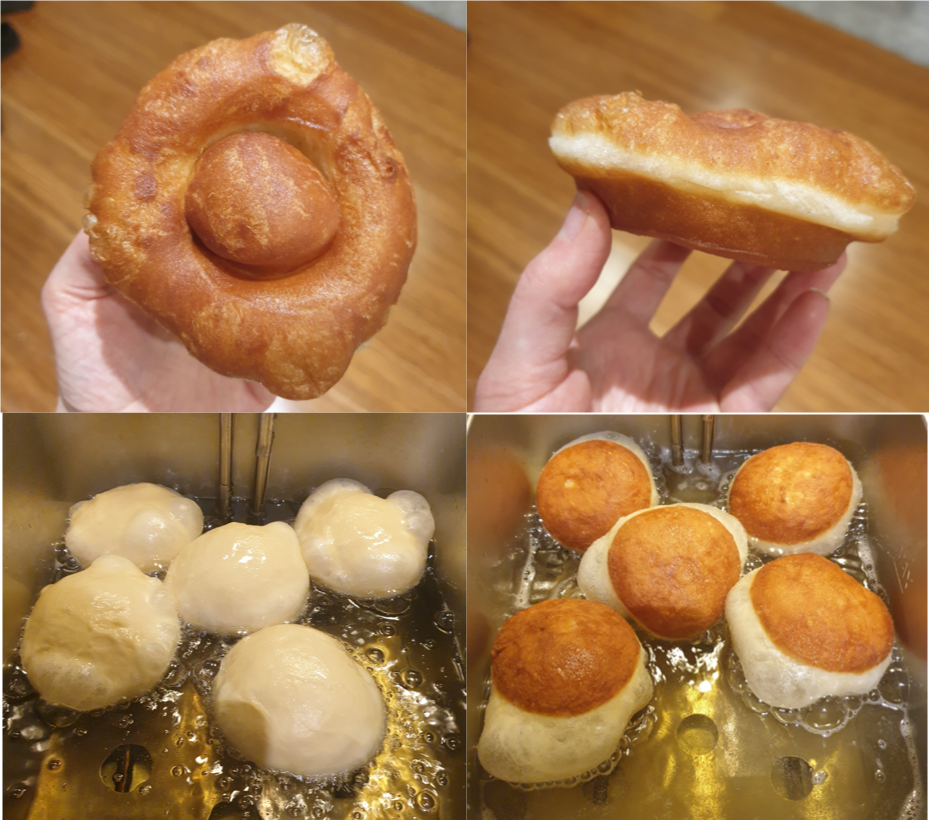 Think about what things were like when the results were good.   Now think about what is different.  Look at everything.  Materials, equipment, process, people, time, environment, you name it.  Since the results have changed, that means something else has changed; maybe more than one thing.

My shot in the dark would be a change in temperature, since we're transitioning into Summer here in the northern hemisphere.  But that's all it is—a shot in the dark.  You are the on-site observer who can do a methodical comparison of the before and after states.

Changed the brand to Marriage's very strong bread flour, but I have been using very strong bread flour the last few times as well (I have at the very start worked with just strong bread flour, but no idea how that might affect it..). I weight everything, the dough is always fermenting in the same spot, they always proof covered with foil in the same oven etc. I have noticed that lately the dough is super sticky, when I try to roll it into a ball it is pretty much spreading on the surface and sticking to it excessively. A couple more pictures of disasters from this morning attached... this was meant to be a very nice ball doughnut but clearly not! :(

What are the analyses for you former flour and the Marriages flour?  Protein content would be one area of interest, as would the presence (absence) of malt or amylase.

How does the dough behave during mixing?  Is it stronger/weaker since the flour change?  Does it feel drier/wetter for the same ingredient ratios?  Which flour produces a more elastic dough and which produces a more extensible dough?

Does fermentation proceed faster/slower with the Marriages flour than it did with your previous flour?  Are you monitoring fermentation or going entirely by the clock?  (I'm not going to give up on temperature having an influence just yet.)

It's good that you’ve already recognized that more than one change has crept in.  Start drilling into those, as with the flour-related questions above, to see if you can identify some cause and effect linkages.  You'll figure it out, I’m confident of that.

Thank you for all the tips! All these questions have been keeping me up at night to be honest, but as an amateur baker I do not know yet how to interpret it all.

For example, the flour I switched to does have 1g more protein per 100g, but does that mean it takes longer to develop gluten and I should work it more? I've been trying to find an answer to that and no luck yet.

Did you squash them down before frying?

Not at all - the spreading all happened during frying

After the final prove, squash them in the middle so they resemble a red blood cell; not too forcefully but you can be braver than you expect.

Then pop them straight in the oil. At the correct temperature they usually cook : 20 secs one side, flip, 10 secs, out.

So my main issue at the moment is not achieving the bullseye donuts, but how to eliminate the excessive blistering you can see on the donuts when they are frying, and the spreading of the dough when it is in the oil..

Sounds like the dough it too wet and perhaps overproved but really, starting with a flatter shape and cooking at slightly higher temperature should solve it. If not just use a little more flour in your mix and knead up a little more gluten. Making sure to properly knock them down before shaping should eliminate larger bubbles although I get them happen plenty if I use more yeast than necessary and my dough seems very active.