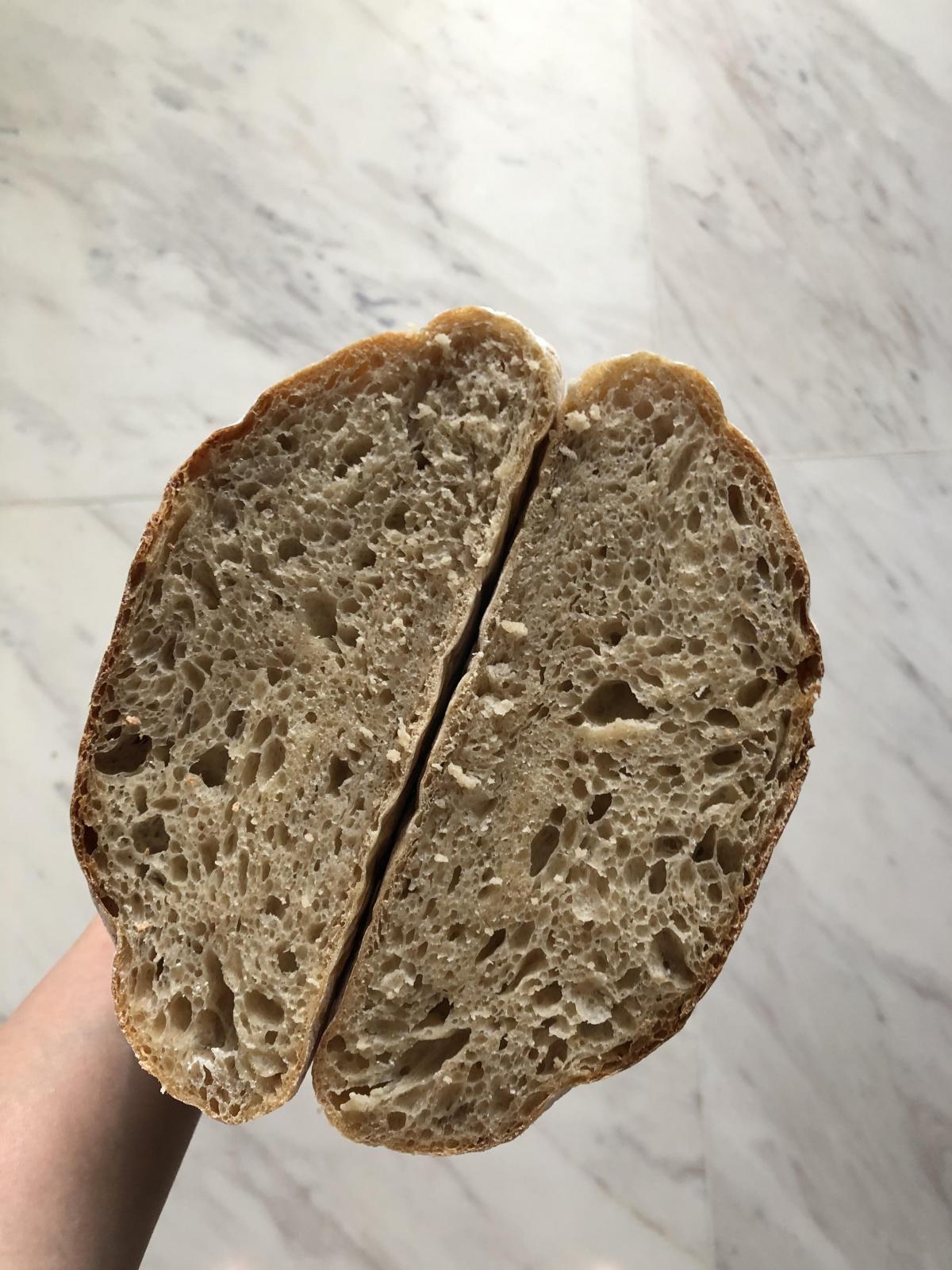 Hi everyone! I’ve lurked on this site for a while now and really appreciate how helpful people are so I thought I would write a post to get a little advice on my own.

I made my first sourdough loaf with my three month old starter last week. It was a 72% hydration loaf (60g starter, 300g flour (plain flour & ww), 210g water & 6g salt). I split the recipe up over two days - did one coil fold and bulk fermented it in the fridge overnight; the next morning I did two coil foils at 30 minute intervals and continued the bulk fermentation on my countertop (room temperature here is around 28 degrees) for 3 hours. The dough was light and airy with lots of big bubbles on the top.

I then shaped it and did the final proof. It seemed to be ready after an hour using the finger poke test as it sprung back quite quickly and left an indent so I put it in the oven in a preheated Dutch oven.

Based on the crumb, would I be right to conclude that my dough was underproofed or are there any other factors at play? Would definitely love to get any advice on how I can improve my next loaf. Thank you! 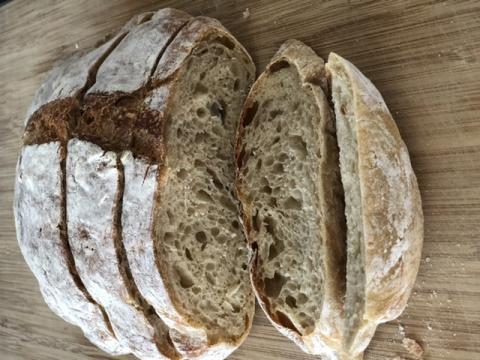 I don't see anything wrong with it, it's properly proofed, has a nice, open crumb  and is baked all the way through. Great success!

I guess your idea it's underproofed comes from those few dense areas, but in my experience they just sometimes happen...or at least I haven't found the reason yet. Maybe the yeasts aren't distributed evenly. Maybe there was some raw flour from shaping stuck there. Maybe your oven doesn't heat evenly.

Yes I thought my loaf was underproofed as the bottom of the loaf is visibly denser than the top but thanks so much for your encouraging comment!

That is a nice loaf.  And it's a GREAT loaf for an early attempt. It's much better than the first few dozens of mine.  So congratulations are in order.

Just throwing out some ideers...   If anything, your bulk ferment may have went too long, or you had too much starter.  If you had 50% or more WW, that would be my guess.  WW ferments fast.

To state it another way... depending on your % WW, and if you used WW in the starter, and assuming 100% hydration starter, you may have used too much starter for that length of bulk fermentation. 30 g of flour in the starter divided by 330 g of total flour = 9.1 % pre-fermented flour.  Which, if you used a lot of WW, may be too much for an overnight bulk ferment.

By the looks of the expansion at the score/slash line, you had some oven spring, which is good. But it does show you could have baked the loaf sooner. Since you proofed for only an hour, it's another indication your bulk went too long.

In bread-baking, temperature is as much an ingredient as time.  28 C = 82.4 F, which is warm enough to make for a quick(er) ferment/proof, too.

It took me a long time (I'm slow on the uptake) to get the amount of starter, ferment time-and-temp, and proof-time-and-temp "dialed in" so they all match up in the mystical "grand conjunction" of oven-spring and desired crumb.  And, I'm still not at my destination.  (If I counted  right, that's 5 variables.)

Then add in another 4 variables for the starter: what you feed it, ratio of feeding (new flour/water to old), time and temp that you let it ferment/mature after feeding before you use it.

No wonder they say: watch the dough, not the clock. Cuz, after you put it all together, the very _last_variable that you can control is the time.

The top crust also looks darker than the bottom crust, as if the DO was not totally up to temp. What kind of oven do you have?   is it convection?  Does it have an exposed bottom heating element?

A convection oven heats the air quickly, so while the oven thermostat may indicate the desired temp has been reached, maybe the DO needed longer to get up to temp.

Was the dutch oven resting on a baking stone, or directly on a rack?

I used 20% ww flour. If my bulk fermentation went on too long, does that mean that my dough was overproofed? It seemed fine at the final proof when I did the finger poke test though.

I do have a convection oven but used the top and bottom heat to bake bread so you might have been right that my DO might not have been preheated sufficiently. Will bake my next loaf using the convection settings.

Thanks so much for your thoughtful response!

The point that you had "a lot of big bubbles" at the end of the bulk ferment was another clue that it was over-fermented.

You can still _over ferment_ during the bulk ferment period and then get a good finger poke test after proofing.  Remember that you deflate a little bit when you fold and shape, so there is a little "do over" during the proofing.  Yet, ... much of the sugar can be used up, and other things go on in regards to gluten structure if the bulk ferment goes too long.

And again, I'm not saying your "proof" time period (after you shaped and put it in a banneton) was too long, I'm suggesting the possibility that your _bulk ferment_ time period was too long.  The finger poke test is related to that of course, but it's separate.

Most instructions include at least _some_ sort of "fold" or a "fold and a bench rest" before the "shaping" procedure.  I have never seen a formula (though there could be some, I suppose) that goes directly fromthe bowl where the bulk ferment was done, to the shaping procedure.

If you did not do some kind of a fold, or a fold-and-bench-rest, before shaping, that might be a reason you did not get as much of an open crumb towards the bottom of the loaf as toward the top.

as to pre heating the DO.  It is generally recommended that the pre-heat be done with the lid _off_, and both pot and lid in the oven.  Otherwise, you're keeping cool air in the covered pot, and halving the surface area that is exposed to hot air, making it take noticeably longer to pre-heat the DO.

and was the DO covered or uncovered during the pre-heat?

Is your dutch oven enameled, or plain (black) cast iron? I'm asking this to understand why/how the bottom of your loaf has thinner/lighter crust than the top, as usually it is the other way around, at least for me.   (If your DO is enameled, and/or you pre-heated with lid on, then the DO very likely did not preheat sufficiently.)

Anddid you line the bottom of the DO with anything?

Please excuse if I get too detail oriented.  Your loaf really is very good.  I'm just responding with possibilities of improving the one thing you mentioned.  And I'm learning here too, from others' experiences. So, thank-you for engaging the conversation. 🕵 (That's a detective emoji, I think.)

Ah yes, I did do a pre-shape and rested it for 15 minutes. I preheated my DO, which is cast iron, with the lid on for 30 minutes. I then placed it directly on a rack but put it on a baking sheet 20 minutes after the bread, which was on parchment paper, went into the oven, as suggested by a YouTube video I watched to prevent the bottom of the bread from burning. Could that be why the bottom of the bread is lighter than the top?

Great tip about preheating my DO with the lid off while keeping both the pan and lid in the oven - definitely makes sense.

And no apologies needed - I really appreciate the time you’re taking to share your knowledge and all the thought you’re putting into this!

The parchment is a good idea, so I'd suggest keeping that.

But if you do use a pan or sheet, I would suggest preheating it with the DO. Just keep it on a lower rack.

And if your bake cycle used the top element that may have made the top crust darken faster. (My top element comes on during pre-heat, but not during bake.)  The top element would still  be good for pre-heat.

But, since you have a convection, you need someone with a convection oven, who also uses a DO,  to advise on how to use that feature.  I only know non-convection style.

So,... so far.... 1) bulk ferment a bit less (and/or use less starter), 2) pre-heat with lid off, side by side inthe oven,  3) preheat the sheet/pan, 4) put sheet/pan on a rack below the rack holding the DO, 5) don't use the top element after taking the top off, just the lower element.  And hopefully someone will chime in about the fan aspect.

And if your oven is small, remember you need at least an inch, or maybe 1.5 inches all around the sheet/pan between the sheet/pan and the walls of the oven.  To allow for circulation so you don't get excess heat build up underneath it.

What temps are you baking at, with lid on, and with lid off?

Thank you for all the suggestions! I’ll take them all onboard when I make my next loaf tomorrow and will report back with the results. 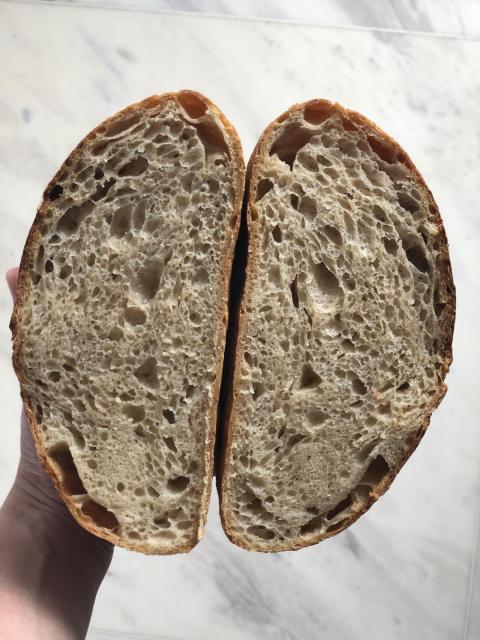 I just made another loaf incorporating your suggestions and my crumb looks so much better! Now, to get that elusive ear :)

Thanks again so much for your advice!

From the looks of things. I would venture to guess that the DO was not up to proper temperature. I use an infrared thermometer a lot in bread baking to check water, dough, and baking stone temps.

Thank you for the response!

Community Bake - I have an Idea - Want Input
Should i store starter in a SEALED jar in the...
Bread Pan Size
Granary Rise and Prove not required ?
Do I need to feed more often?
END_OF_DOCUMENT_TOKEN_TO_BE_REPLACED