I have been working on a 2.5kg version of FWSY Overnight Blond, baked in an 11qt Dutch oven, for about 2 months (the subject of an earlier post in this forum as well).

My earlier challenge, which was how to move this large miche into a Dutch oven without it turning into a mess, has been solved by retarding the dough overnight and then baking straight out of the refrigerator. The cool dough is stiff and thus easier to manage with just my hands.

While the flavor has been great, what I don’t like so much about this approach is that it looks like it’s affecting crust coloration, although I understand that retarding should in fact improve it.

I bake dark deliberately as Forkish recommends - those burnt bits are addictive. But there’s a sharp contrast between the dark crust and sections that are exposed as my slashes open up, which I don’t like, and I seem to recall that this is usually indicative of a solvable problem. I just don’t know which. I also find that the crust takes on color surprisingly late in the bake.

As far as temps are concerned, I’m still trying to dial it in. 475 at the start for sure, then I’ve dropped it down to 450 after 30 mins. Any lower and I’m afraid of losing my dark coloration.

I’m attaching here a photo. this was baked at 475 straight through but it’s pretty typical. Any guidance would be very welcome. Thanks as always! 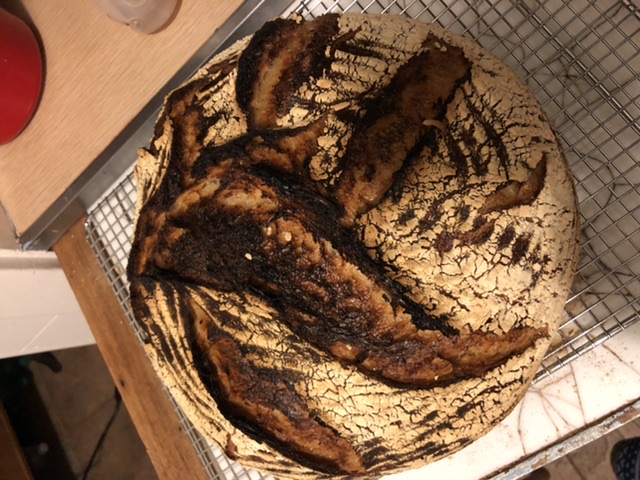 The little thin peaks in the "bloom" and along the score lines can't help but brown and char faster than the flat surfaces.  That is just physics.  The little peaks just don't have as much "connection" to a cooler mass of dough underneath them.

I think we've corresponded before. (But I've slept since then. ;-)  I also do large boules, but not quite as big as you, up to 1600 g so far.  And I do want to learn from you, as I want to work up to large mostly-whole-grain miches.

Here's the solvable problem:  your oven is too hot for the final uncovered portion of the bake.

I believe a more evenly browned/charred crust can result from a lower temperature (and longer) bake.

Whether cooking bread,  or roast beef, or a whole turkey, one rule of thumb that I've noticed is: the bigger the slower.

So if a 1 kg boule needs to remain covered in the DO for 30 minutes, a 2.5 kg boule probably needs to be covered (or steamed) even longer.  And longer means lower temp.

By  using a DO, and going bigger than Forkish's  1.8 kg, I think some major temp and timing adjustments from his are necessary.

Then take temp every 8 to 10 minutes.  Stop baking when crust is where you want it, or internal temp is 205 F (for the 5% whole-wheat, 78% hydration, Country Blonde) whichever comes first.  Minimum internal temp should likely be 200 F, but that's a guess on my part.

Again, there's no rule that says you absolutely have to get the crust "done" by the 60 or 70 minute mark. I have a very strong  suspicion that you'll get the more-consistent crust that you are seeking with a lower temp and longer bake.

Ok, thanks for this Dave and for your earlier advice as well. Very thorough! I have in fact been trialing the lower temps, but haven't done so consistently since I began retarding my dough since this was an 11th hour discovery. A loaf this size is a bit of a commit - it's bread for a week+. But I'll stick to a lower temp in my next bake and see what this does.

Do you alter the amount of time that you keep your loaves covered in the DO as well based on size? And does the longer time at a lower temp have any impact on the crust, ie make it thicker, or does it dry out the loaves?

"Do you alter the amount of time that you keep your loaves covered in the DO as well based on size?"

It was only while thinking through your monster sized hunk o' dough, doing the physics and math in my head, that it finally dawned on me.

There are two ways to think it through: 1) keep it proportional to the total bake, or 2) once oven spring is complete, does it need to be covered?

"And does the longer time at a lower temp have any impact on the crust, ie make it thicker, or does it dry out the loaves?."

It does seem to increase the thickness of the bottom crust, and part way up the edge.  But I'm using 88-90 % hydration, so I have plenty of moisture to work with.  And I'm doing 75-90% whole wheat, whereas you're doing less hydration on a mostly white flour loaf.  Hence, I would think your loaves would bake off the inner moisture sooner, given a same size loaf.  But then you have a  _larger_ loaf, which therefore has even more moisture (in total, just not in percentage) to bake off, through a longer distance from the center to the surface.

But, no, I have not had a dryness problem, neither crust nor crumb, with my 71 to 80 minute bakes.

Bottom line: I have used a combination of crust color and inner temp to tell me when the loaf is "done."

If the desired inner temp is reached, but the crust is not dark enough, that means I need to raise the temp next time.

If the crust is at maximum darkness, but the desired inner temp has not been reached, I need to lower temp next time.

And that's another learning curve: "What's the desired final inner temp for _this_ formula, and at _this_ size loaf?"   I'm not 100% sure of this, but: my experience so far is that mostly whole wheat formulas have higher final temps than mostly white wheat formulas.  I'm not sure if that is a function of the nature of the whole wheat flour, or a function of the percent hydration.

For me, another factor for supple crust is not cutting open the loaf for 20 to 24 hours.  I cool for about 1 to 2 hours, then seal in a plastic bag for another 18 to 20 hours.  That allows remaining moisture to migrate out from the center and re-hydrate the crust and make it soft, or soften it somewhat .

I'm fascinated by large loaves, something rustic and ancient and communal about them, so please keep the TFL crowd apprised of your baking adventures.  I'm impressed by your willingness to tackle that big ol' hunk o' dough!

Did you proof that in a banneton?  If so, how big, and where did you get it?

Hi Dave - again appreciate all the info. More experiments ahead ...

Re the proofing, I picked up a few 12 inch bannetons from Amazon - this being the latest but they're pretty consistent in shape and size. With the overnight proof I've been using more flour than I'd prefer just to make sure there's no sticking but I'll dial that back as the bannetons are more seasoned and I have more experience. Using both plain AP flour and a 50:50 combination of rice and AP.

Thankfully bannetons are a lot less expensive than they used to be.

Calling all Commercial Yeast bakers
Community Bake - Whole Wheat Bread for the...
What should I be expecting from my starter?
Psylly Psyllium
Best mixer for very small-scale commercial bagel...
END_OF_DOCUMENT_TOKEN_TO_BE_REPLACED