I have been able to get some De Ceccio durum wheat flour from an online retailer in London (Luigi's).  I have been trying to bake a version of Pane Tipo di Altamura - the one that looks like a Cardinal's hat with four points - but I can't get the points to look good.

I made a biga using 75g ciabatta flour (from Shipton Mill), 125g of Durum wheat flour, 120g bottled water and 1g fresh yeast.  That fermented for about 15 hours (it was quite warm in the UK overnight into yesterday so at about 21C).

For the main dough I used entirely Durum wheat flour (325g), 5g fresh yeast, 7g salt and 250g (tap) water and all the biga.  I initially made the dough using the durum wheat flour, the biga and all but 50g of the water.  I left that to autolyse for about an hour then dissolved the yeast in the remaining water and mixed it into the dough, I then mixed in the salt and left the dough to prove on the kitchen work surface for about an hour and a quarter, with two stretch and folds.  I then carefully formed the dough into a ball, without much degassing, placed it into a well floured linen-lined basket which I then put in the fridge at 4C for the dough to prove for about 75 minutes.  I then tipped it out onto a well-floured peel, slashed the top and tried to form the peaks before putting it into a hot oven, sprayed well with water, for just over 30 mins.

I think that the loaf does look quite nice though and is a great hit with the family.  It has a nice tasty crust with a soft and flavourful crumb so it will be a "keeper" for us, particularly as the pale yellow crumb is quite different and striking! 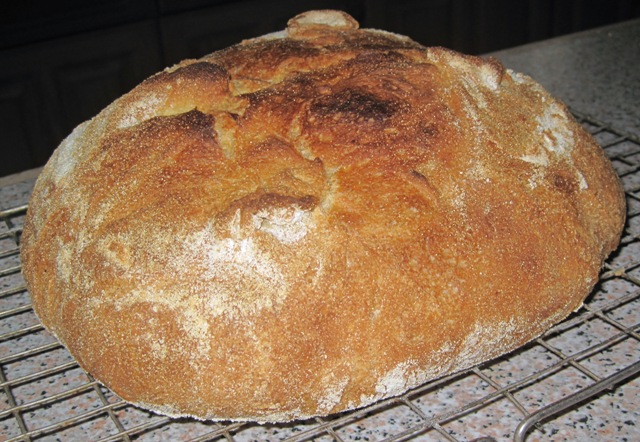 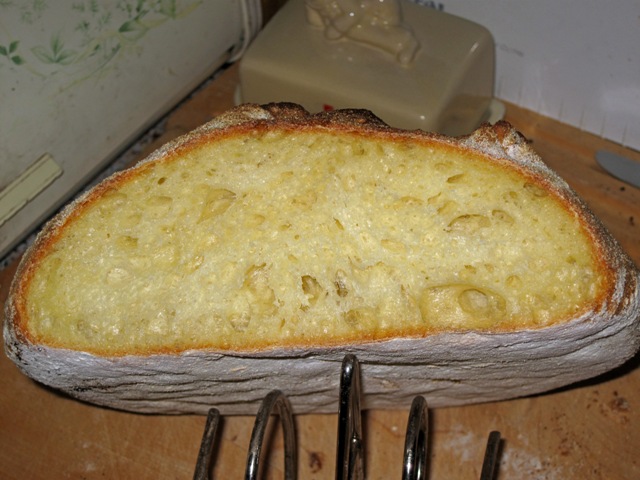 loaf of bread.  I like everything about it from the scorched dark brown crust to the glossy gelatinized, airy open crumb.

Thanks guys, perhaps a tad too dark on the crust for my youngest daughter's taste but this style of bread has weaned her off what I - not too politely - refer to as cr..py bread (aka wonder bread - as in "I wonder if it is bread?")!

And being able to convert your youngest's taste!

Some lovely breads being posted on TFL just now showcasing use of durum flour.

Yours has such a lovely colour to the crumb.   I suspect the simplicity of formula and method as you describe it, is one of the secrets as to why this bread is so good.

Thanks for the kind comments.

Andy, I believe in the KISS principle of "Keep it Simple Stupid" and, being a bit stupid, I really need to keep it simple.  Having said that, when I get the flavour and texture I want from a comparatively simple formula and method, I see no need to add complications - and there is always pressure on fridge space in our house that makes long, slow bulk fermentations awkward to fit in :) .

Hello,
The crumb on your Altamura loaf is beautiful!

You may have already seen this shaping video, but in case not, dmsnyder's post on Altamura bread had a link to a video on 'priest's hat' shaping:
http://www.thefreshloaf.com/node/24139/pane-tipo-di-altamura-quotlocal-breadsquot#comment-175664

Happy baking to you!
:^) breadsong

I recall seeing some of that video when it was first posted but didn't watch it all the way through, probably because our broadband connection is slow as we are "out in the sticks", and videos frequently don't play properly.  Perhaps everyone is busy watching the Queen's Diamond Jubilee concert on the tv but it did play properly, all the way through today!  Now I see where I was going wrong, ordinary slashes are not enough :) .  I will use my scraper next time, thanks.