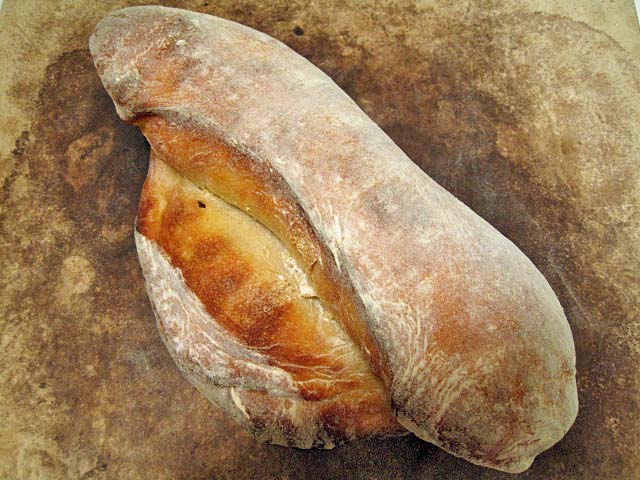 Franko's recent blog about his project to bake Pane tipo di Altamura (Pane di Altamura...my ongoing project) reminded me that this bread had gotten lost on my “to bake list.” I have baked a number of breads with semolina and a couple with durum (finely milled durum flour) my favorite of which has been Tom Cat's Semolina Filone from Maggie Glezer's "Artisan Breads".  However, I've never before baked an 100% durum bread. My reading about the Pane di Altamura and Franko's blog inspired me to attempt this bread, finally.

I have three books with formula's for Pane tipo di Altamura: Carol Field's “The Italian Baker,” Franko Galli's “The Il Fornaio Baking Book” and Daniel Leader's “Local Breads.” The first two use a yeasted biga and additional commercial yeast. They also use a mix of bread flour and semolina. Leader's formula uses a biga started with yoghurt and semolina flour. Leader's formula also differs from the other two in specifying a higher dough hydration. Based on my bias in favor of wild yeast and my past positive experiences with breads from Leader's book, I based my formula on his.

I deviated from Leader's formula and method in a number of ways which I will describe. I converted my stock starter to a durum biga and did not use yoghurt. The major compromise was that I only fed my starter once with durum flour. I had planned on three refreshments before the final mix, but the weather forecast is for temperatures over 105ºF for the rest of the weekend. Since it is only expected to get to a chilly 98ºF today, it seemed prudent to bump up the baking schedule and try to avoid using the oven when it's 105 or 107ºF. So, what's described is what I actually did, with notes indicating significant deviations from Leader.

1. Ideally, one would add one or two additional builds to convert the biga to 100% durum. 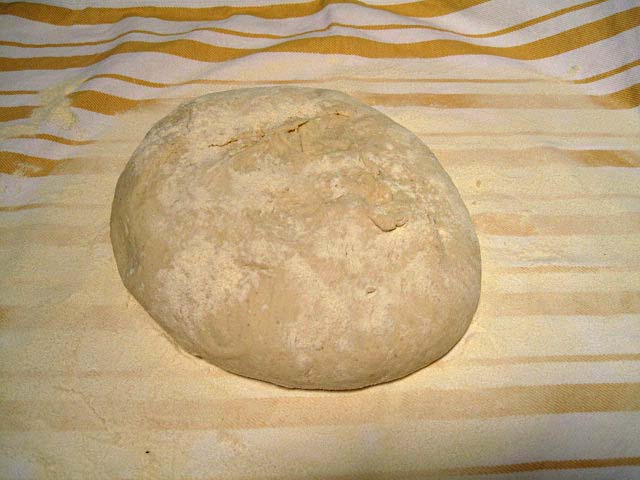 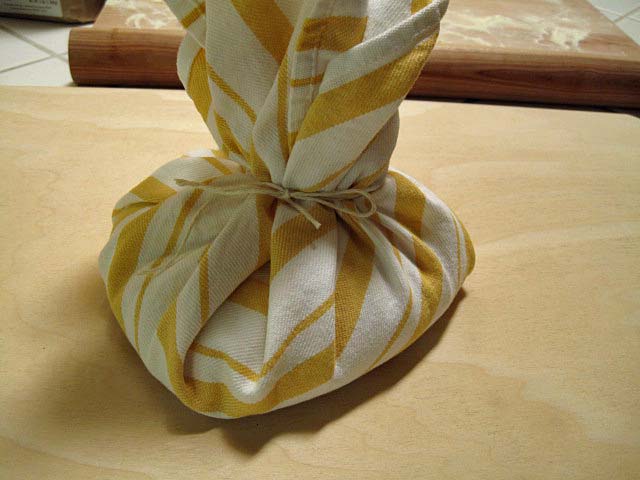 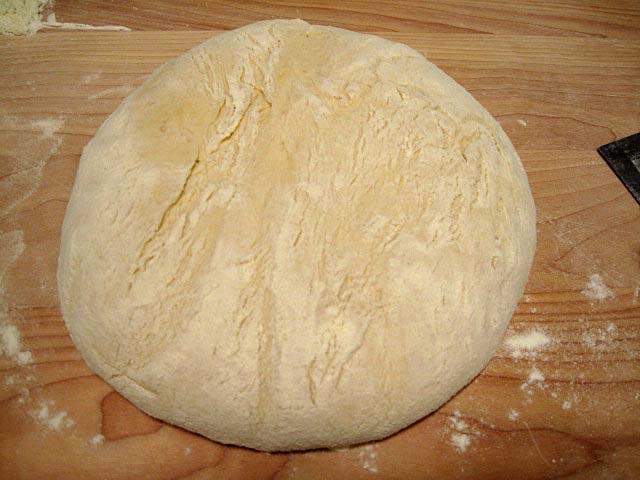 Proofed and ready for the final shaping 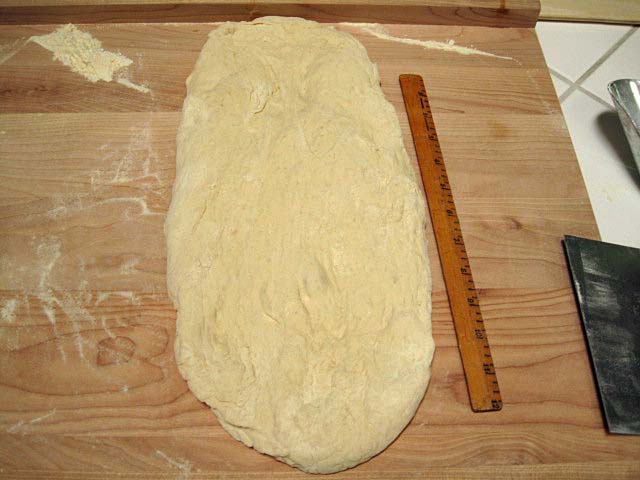 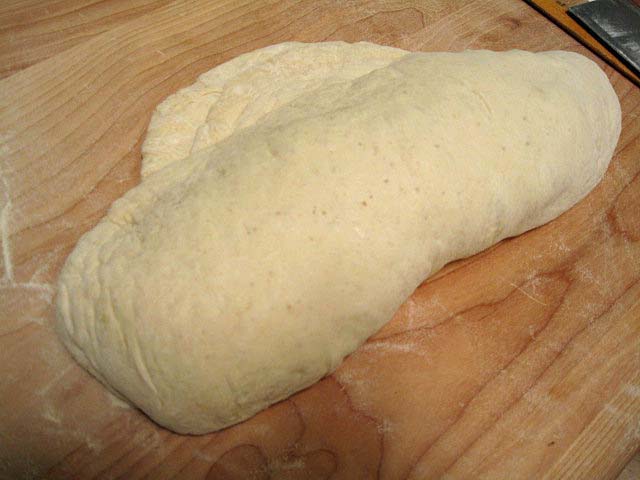 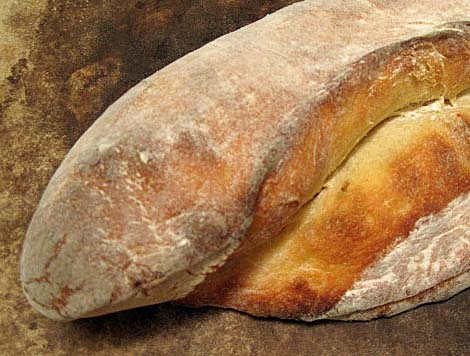 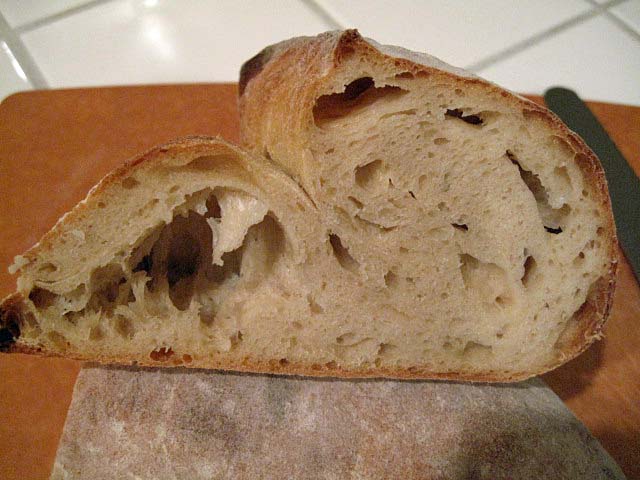 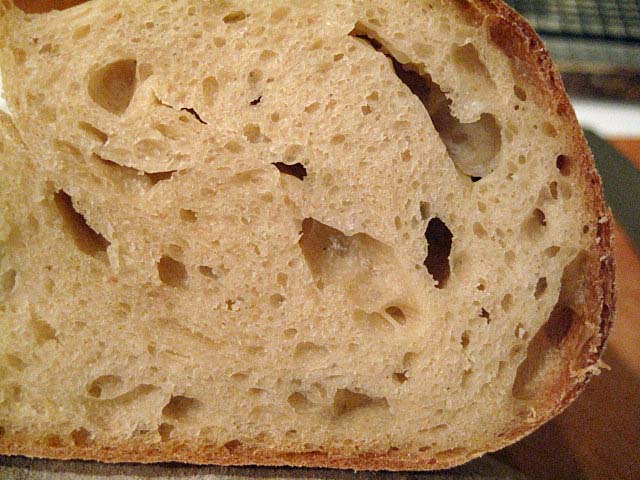 The aroma and flavor of the bread are most remarkable for a prominent sourdough tang. The flavor otherwise is very nice, but I cannot identify distinctive flavors I would associate with durum, as opposed to other wheat flours. The crust is chewy over the fat part of the loaf but quite crisp over the flatter part.

This is a loaf I'm pretty sure will have a nice crumb to it judging by the volume. As well, the crust is much better than anything I've managed so far. The key point I'm taking from your notes regarding fermentation are the high ambient temps, something we haven't had here on V.Island for any length of time this Spring/Summer and has no doubt  been a factor in my own mixes. Your dough looks 'stiffer' than any of the ones I've made,  giving me a much better understanding of what to aim for. From your photos it looks like there are some flecks of bran in the mix. Are these from the durum flour or the starter...if that's what I'm actually seeing? Looking forward to the crumb shots David,  confident they'll show a much more open crumb than my efforts to date. Nice baking!

The crumb shots are now added.

There were not any bran flecks I could see. I used durum flour from KAF, and it was very finely milled, light yellow in color. There is some whole rye and ww in my stock starter, so maybe that's what you are seeing. Leader does call for a relatively large inoculation of starter, as I'm sure you noticed.

The crumb color in my photos is accurate. It was not as yellow as I'd expected. I wonder if the mixing oxidized too much of the carotenoids. I might try a slower speed machine mix or hand mixing when I make this again. I'd like to make a loaf with the "priest's hat" shape.

I also wonder if the flavor profile would be different had I gone through three levain builds as originally intended.

I appreciate your kind words, and thanks for the inspiration! I'm looking forward to seeing your next bake.

Beautiful bread, david! Durum flour, another one of those elusive ingredients i'am looking forward to meet.

Thanks for posting this!

Ananda's comment on my trip to Genzano put Pane di Atamura back on my bake list for next week. Your description and results will be helpful! As inspirational as Leader's book is, the editing oversights (like the biga amount needed) can be a bit frustrating and having them highlighted is helpful!

Let us know how yours turns out!

If I were to do one thing differently, it would be to make at least 2 and ideally 3 builds of the semolina biga.

As ever, David, thank you for such a thorough investigation.

The notes you make will help many people, I'm sure.   Whilst Leader's book is inspirational in so many ways, I am sure it is the one I have heard more people finding large errors in than any other.

So what of the salt at 2.6%?   Did you find that too much in the final taste of the dough?   Maybe that is why you struggled to "identify distinctive flavours"?

I'm sure your one area identified for improvement is quite the best; a refreshment regime of more building would undoubtedly have produced a stronger durum leaven.

One thought I had:    the crust of this loaf is outstanding, and the crumb of the main block of the loaf is very open and inviting: clearly high quality dough!   I just wondered if you had made up the "cap" shape, say, half way through final proof, rather than at then end, do you think you would have found that easier, and produced a better crumb through and through?   It is extremely challenging to manipulate fully proved dough in a gentle enough way to produce the final shape at full proof without damaging the delicate dough structure.   I just point you to the cavity evident under the "peak" section of the finished bread.   Surely this has only come about right at the last minute as you were shaping and loading to the oven?   A small amount of collapse in the dough, and the gas within is forced to the weaker part of the loaf causing a big hole, rather than random, but smaller cell distribution.   Just a thought; such a top loaf, however!

"Local Breads" is an editing tragedy. It's a shame, because it's such a wonderful collection of stories and breads.

The bread did not taste at all salty, and I'm pretty sensitive to this, I think.

I followed Leader's procedure for proofing and shaping, but the points you make regarding the timing of final shaping and the crumb structure are excellent.

I very much appreciate your thoughtful suggestions, as always.

Hello David,
Thanks for documenting how you made this bread (and taking the time to post all of the photos along the way!).
It's so nice that you and Franko have posted about this one, as I just picked up Mr. Leader's book; it makes me happy that I have the formula and story, after seeing both of your lovely loaves.
Looking forward to making this one someday - your notes and the comments/responses in this post and Franko's, will be quite helpful.
:^) from breadsong

Looking forward to seeing your bake of this bread.

I think you will enjoy "Local Breads." Just be sure to check the formula calculations!

David, thanks for the heads up.
:^) from breadsong

Very nice write-up, photos and bake of your altumura bread.  I found this video, in English of an ancient bakery that makes the Altumura bread, showing it with an open crumb, crispy wfo crust.  It's on You-Tube 'Bread from the Wood-Fired ovens of Altumura'..I was researching some duram flour Focaccia's..as I posted on 'Franko's ongoing quest' about..hope you enjoy!

I've seen that video. The one showing the "priest's hat" shaping is this one:

The video shows many shapes, but the priest's hat shaping is at about 4:20 min. into it.