Yet another variation on my 36 hour sourdough baguette dough, only this time, it's not baguette at all, it's pizza! Of couse it's nothing new to make high hydration baguette dough into pizza, but I didn't realize how convenient it is to combine the two. Same dough, but pizza doesn't need to proof, it bakes at the highest oven temp (which is the same temp I preheat my oven for baguettes), it bakes for only 8 minutes (way shorter than the proofing time for baguette dough) - all this means I can use a part of the dough to make and bake pizza while the rest are made into baguette and being proofed. The pizza is made and mostly consumed before baguettes are scored and sent into the oven. How convenient, that's what I call stream-lined baking!

The basic 36 hour baguette formula can be found here, and the rye starter variation I used for this dough can be found at the end of this post. I will breifly outline the process again:

- Follow the basic 36 hour sourdough baguette formula here until dividing the dough into 4 parts, each around 230g.

- Preshape one piece of dough into round for pizza, the rest into cylindar for baguettes

- Add topping. This time I first drizzle olive oil, then added fresh mozzarella, and grated cheddar. Send the pie into oven to bake at 550F (the highest temp my oven would go) for about 8min. When taken out, the cheese is still bubbling, put on a layer of prosciutto, then a layer arugula (which was tossed with some olive oil and grated cheddar first). Prosciutto tend to get tough went it's baked too long, so it's added afterward, the residual heat is enough to blend all the flavors.

- Score and bake the other baguette doughs as usual when it's finished proofing.

I really like the slight bitterness of arugula, a perfect match for prosciutto, and the cheese. The cheddar cheese I used was pretty salty, so I didn't add more salt.

That, is what I call a good crust!

The baguettes weren't half bad either, did I meantion how much I like the rye starter variation? The flavor is outstanding.

I even got some "ears"! Getting a bit more confident with scoring the 80% dough.

Who knew baguette and pizza are so similar?

The process worked out so smoothly that I think I will always use one piece for pizza from now on - it would mean faster dinner and more room on baking stone for the baguettes.

Txfarmer, wonderful as usually, though i tend to critique the super holey crumb that defies the reason why it is "bread" in the first place! which also attests to your superior shaping skills!

I agree that not every bread needs to be very hole-y, but for baguettes, I prefer it airy inside, which showcases the crispy thin crust.

Excellent examples of a finely crafted baguette and pizza.

Yes of course your baguettes and pizza look wonderfully tasty as ever, and showcase high skill level indeed.

Just a note to agree with your comments regarding similarities of the 2 types of dough, and how the scheduling fits into place.

Pizzas [and related Italian bread-based snacks] were created, if I'm not wrong, as a rustic snack which could be baked super-fast in a red-hot oven, before the main bake began.   So, having worked off all the dough ready for baking, the bakers could enjoy a snack prior to commencing baking off the bread.

Pizzas [and related Italian bread-based snacks] were created, if I'm not wrong, as a rustic snack which could be baked super-fast in a red-hot oven, before the main bake began.

Of course! That makes total sense now that you said it. Nothing gets wasted in bakeries, including heat!

Gorgeous baguettes and pizza!  Great way to make use of that super hot stone, before it cools down...and feel like you've made use of all that extra energy, yours and the power company!  Don't stop at saving some baguette dough for your pizza's!  It is so satisfying to turn out a pizza with some of the days bread dough...it just makes you smile and think, wow what an easy meal or snack.

It does make total sense to alway use a bit of the dough for pizza, and my tummy thanks me for it!

All Your blog make my mouth water!!!  I wish you were my neighbor!!  Your baguettes are VERY good that I really admire!

I am reading your blog like reading a professional cooking magazine now :)

Thank you so much for the encouragement. :)

What if I"ll use high gluten flour instead AP and
How much water?

Sorry, replied at the wrong place.

After reading and researching I bought a 50 lb bag of KA sir Lancelot high gluten flour for pizzas and breads . Mostly I am doing 3 day cold ferment with 10% starter at 60-70% hydration, with minimal kneading for pizzas and using electric home oven with stone at 550-600 for 5-6 minutes Extensibility and browning is ok but I agree with you it is too chewy. I 'll try your method with AP and see what happens. But can someone tell me where and when are the high gluten floures than used?
Thanks

I am curious what article told you to use high gluten flour for breads and pizza. High gluten flour (sir lancelot) is good for bagels - because bagels needs to be extra chewy(in fact on my 5lb bag, a bagel recipe is printed). In some rare cases, if a bread has a lot of flour that has no gluten (barley, buckwheat,etc) and reuqire a certain volume, maybe some high gluten flour in the dough would help.

In general, bread flour has enough gluten for most breads, sometimes even too much. For lean hearth breads, a good AP flour (King Arthur Flour AP is good) is suitable. For pizza, which requires a lot of extensibility and minimal height, AP is good, and some authentic Itatian recipes even use 00 type flour which has much lower gluten than AP. So using high gluten flour for pizza is polar opposite to my knowledge on how to make pizza.

I really appreciate your help. This sounds right I am going to keep my KASL for bagels. I decided to go to high gluten after reading some post on pizzamaking forum.

You are quite creative, txfarmer!

I made your rye baguettes today.  They were very good! Thank you, txfarmer! 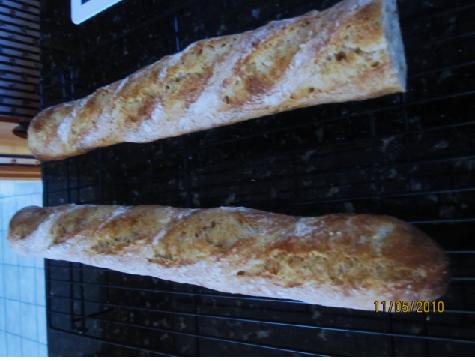 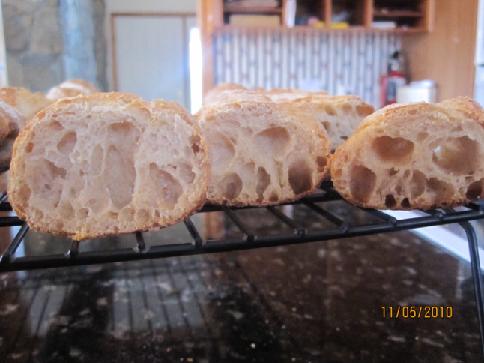 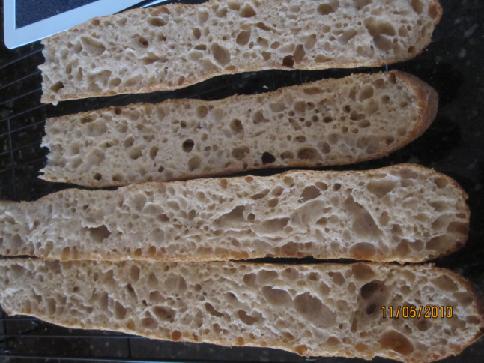 Look at the open crumb, I am so glad they turn out so nice for you!