I altered my procedure in two major ways: First, I followed MC's suggestion that I try this bread with a single levain build, rather than the three builds used by Gérard. Second, rather than mixing the flours for each build, I weighed out the total flour mix and then used the necessary portions of it for the levain and the final dough. In addition, following Rubaud's lead, I scored these loaves very lightly, and I baked them at 450ºF, which yielded a lighter-colored crust.

When I made this bread a few days ago, I had problems with the proofed loaves sticking to the couche and to the transfer peel. MC said that Rubaud does not flour his couche. He dusts the bottoms of the loaves with a high extraction flour. I dusted my couche with some coarsely ground whole wheat flour, and this worked better than the AP flour dusting had. I also dusted the tops of the loaves with AP flour to prevent sticking to the covering folds of the couche. As a result, the baked loaves have a quite prominent flouring. I don't find this particularly attractive, so I'll try to avoid it in the future. 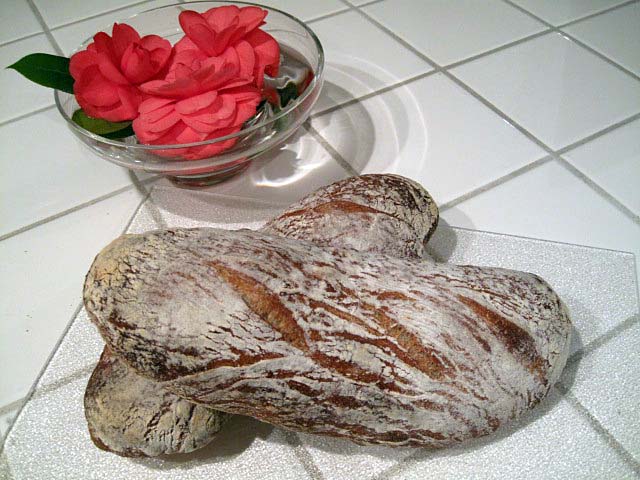 This bake was essentially identical to the first in oven spring, crust consistency, crumb aeration and, most importantly, flavor. The flavor, as described before is simply astonishing. 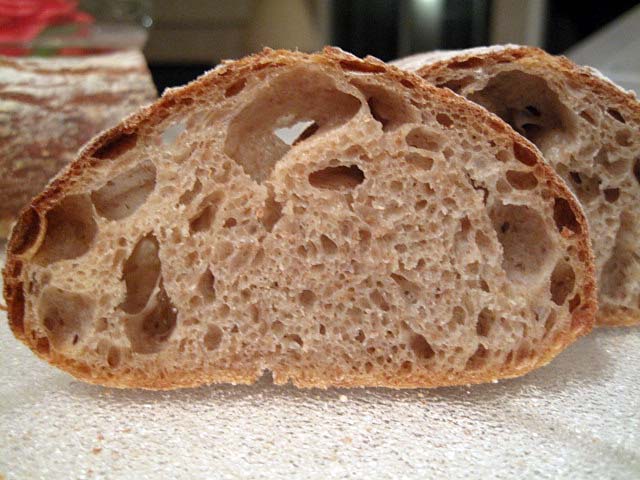 This bread is highly recommended.

... and, most importantly, flavor.

There are a lot of steps in the baking skill scale and, in my opinion, when you focus on flavor, you've reached one of the higher skill levels.

Very nice David.  That is interesting that the single build yielded the same flavor.  I will definitely try this in the future.  Our household is also not appreciative of heavily floured loaves.  It is tough with this high of a hydration to eliminate the sticking otherwise.  I look forward to your future developments with this formula.

They look terrific. Am I correct that the crumb looks gelatinous?

Are you able to report any aroma coming off the finished bread?

I decided to rev my starter up one more time before beginning the 3 step process once again, on this bread. I was a little disappointed in the crumb of my first try compared to yours and others. It tasted great but I thought it was a little dense.I thought I would be better served first having this turn out as intended before I start looking for a shorter procedure.

I also combined all of the flours for the total bake as you did. That certainly makes the amounts more manageable.Still, the first stage could be mixed in a thimble with a tooth pick.

Did you use any salt in the starter builds? I measured out the 10 grams for the dough and cut away roughly 25% of that amount to add to the combined flours. I figured that would amount to roughly .5% in the preferment's. I'll add the remaining with the dough, after autolyse.

As I cut further into the loaf, I found the crumb more dense toward the ends than in the middle. I don't know if that was because of shaping or could be somehow due to the single levain build.

I didn't use salt in the levain. I had already mixed it before the exchange on this subject. Next time.

Looking forward to seeing your bake.

Addendum: The crumb was less gelatinized than with my first bake. I'm not sure if this was because of the lower baking temperaute or what. The bread, uncut, just smells like good fresh-baked bread. The aroma of the crumb is wonderful - a prelude to the extraordinary flavor.

the Gérard Pain in a batard form. The crumb looks very enticing...At what temperature and how long did the final build take to develop? I have a guest from France coming this week and I was asked to bake one of my best breads...the pressure is on...

The levain fermented overnight - about 10 hours - at about 68ºF.

...came out lovely and the crumb looks sensational. I agree about the flour on top: if not necessary, don't do it. When I was last at the bakery, G gave me some dough to play with while he was working and I made a few loaves. He had me dust them with flour, then cover them with a plastic sheet. After maybe one hour he instructed me to remove the plastic sheet and let them develop a little bit of a dry skin, then (after maybe another 45 minutes), put the plastic back on. All the flour that was on top had been absorbed by the dough but they didn't stick anymore. I had never given it any thought before but I realized then that G's breads are only covered during part of the proofing.

I am so pleased you got a terrific flavor. If you ever have an opportunity to use freshly milled grains, the flavor is going to be even more delicious.

Proofing loaves uncovered! Another trick to try ... I'm falling behind! ;-)

I've been resisting getting a flour mill after reading about all the new techniques I'd want to master ... tempering grain, multiple millings, multiple siftings. My plate is already pretty full. Yet, you make it sound like you do a single milling and no sifting. Pretty straight forward. I'm tempted.

There is nothing to compare with the taste of freshly milled flour. (I have been and will be away from home for a significant period of time and I miss the fresh milled flour.)

If you don't want to fool with all the time and techniques, let me suggest an impact mill as a good gateway tool.  Even though I love my Diamant, I have been considering getting one for when I just want a simple whole wheat flour.

If you don't want to fool with all the time and techniques, let me suggest an impact mill as a good gateway tool.

Like a "gateway drug," eh? Impact mills lead to "the hard stuff." Thanks for the warning.

Reading the discussions and seeing everyone's lovely bakes has been very interesting.

The flavor must be amazing with fresh flour.  I also wondered about the wood he uses for the firing..it was maple..I think that would also enhance the flavor of G's miche.  Oh, I can just smell the firing of the wood!

When I read earlier about G's not flouring his couche..the first thought that came to my mind was...they are probably so well seasoned after so much use they are 'Stick Proof'...I would have to flour mine because my linen is not near as seasoned as G's.  Do you think that might be why he only dusts the dough before placing it in the linen?

I have this one on my to do list.  The flavor sounds amazing.

...the reason he doesn't flour his couches is that they are well seasoned. After all he has to dry them out after use since they get pretty damp from the dough. But I will ask him and come back to this thread.

...about his couches and he said the reason he doesn't flour them, ever, if that he doesn't like the putty-like substance that the dough leaves on the couche when it has been floured. The way he does it, there is no deposit left on the couche, so he only needs to dry it. His couches get scraped once a year.

G has a scientist friend who is actually going to analyze one of his couches in a lab to determine the possible contribution of his couches to the taste of his bread.

trailrunner
February 1, 2010 - 11:06am
really interesting and informative as usual..

I was intimidated as I read the first postings on this bread. You have brought it into the realm of doable for me. Thank you for experimenting and then reporting...it is so helpful and saves much angst for some of us. I think the loaves look wonderful...would you try some of the rice flour just to see if it reduces the sticking ? c

I also followed MC's version, I only feed my Gerard starter 1 time or two if I can get around to it. this stuff stays quite alive and really has some push. My latest attempt at a Shiao-Ping version was total disaster, sorry to say! Must be the lazy baker in me or the fridge was too cold, or even perhaps the dough overproofed. This formula me thinks doesn't like retarding, but I could be wrong?

Anyway a picture of my last Gerard is posted on my site along with some various bakes I did this very cold weekend!

Very lovely loaves, and the camellias in the your photo is also lovely (my favorite flower).  Thanks so much for posting the recipe.  I was reading M.C.'s post about Gérard Rubaud and he is one very amazing baker.  I'll give your recipe a try this week and hope I can come close to the results you achieved.

Let us know how yours turns out.

Going to make this on Wednesday, my day off. Not sure whether I should do the 3 build levain or single build. Also can't decide on how I'm going to shape it either. Maybe some baguettes? Wish me luck.

Isn't it something about this particular flour combination!

Thank you for picking up MC's interview and GR's formula and sharing your beautiful miche. You really started something, stimulated a lot of enlightening discussion and made a lot of bakers happy with this wonderful bread.

I am attempting your version of Gérard's Pain au Levain this weekend and have a couple of time related questions:

Per your idea, I am going to combine the final weights of each flour ahead of time. Just for grins, I will do all 3 builds the first time around and plan on creating some extra levain for pâte fermentée à la Shiao-Ping for a second attempt. I even thought about keeping an on going levain and continue feeding it with the same flour mix and use it in some of my standard recipes.
I wonder how it would work for San Joaquin or Susan's Simple Sourdough?
Thanks, John

Re. the S&F timing: I've done it both ways. However, I do at least 2 S&F on the board. If your dough doesn't need it, you can skip one.

Re. proofing time: As I recall, I proofed for about 1 hr, 45 min. and I thought the loaves were 10-15 minutes over-proofed. Y'know the drill: "Watch the dough."

Re. using Rubaud's flour mix for starter feeding: Great idea. (I've been thinking about this myself.) It is pretty close to the starter chow I use now. (70:20:10, AP:WW:Rye). I don't know as much about spelt as I'd like to. I'm guessing the important beasties would find it a gourmet treat.

Re. Using Rubaud's flour mix for other breads. Darn! Another great idea! The question would be: How does hydration need to be adjusted for the different flours than what you're accustomed to?

Just keep us up to date about what you try and your results!

The bread are great, I love that it's simlified, I'm going to try this next week and bake in my WFO and see how it comes out. Will surely share. I got the recipe bookmarkt.