European Peasant Loaf from Artisan in 5 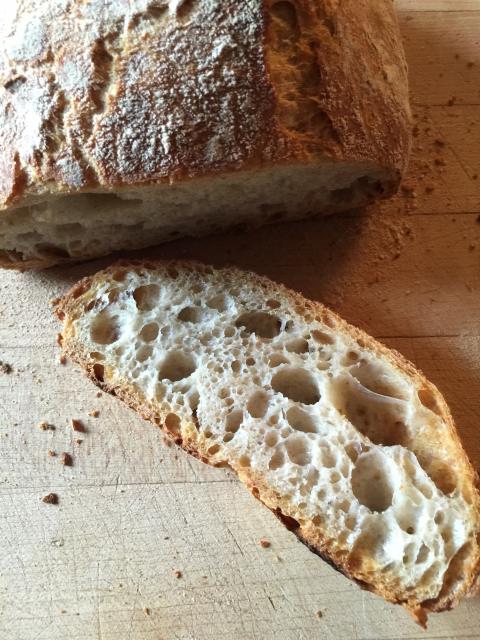 I received Artisan Bread  in Five Minutes a Day from a friend as a thank you and decided to give it a shot with the European Peasant Loaf. I was very pleasantly surprised at the results. I followed the outlined method pretty closely aside from throwing in a tablespoon of sourdough starter in addition to the yeast (1tbsp) and baking it in a dutch oven rather than on a stone with steam. Next time I make this, I will go back to another shaping method because handling wet sticky dough up in the air while trying to dust it with flour and making a boule out of it wasn't working too well for me. I love the idea of being able to make the dough and then it sitting in the fridge until I want it.

I have an experiment in mind combining Tartine's recipes, DaBrownMan's Bran sourdough starter, and this method, but I will create another post for that. In the meantime, here are the two loaves shortly after coming out of the oven. 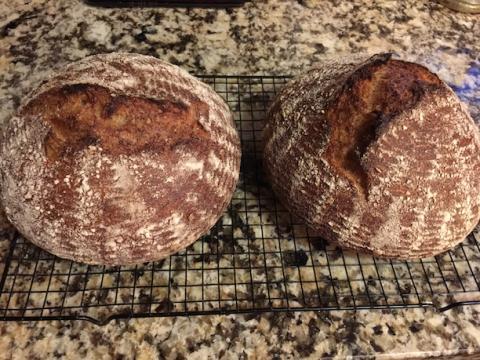 I used Tartine's Ode to Bourdon quantities and types of flour but followed dabrownman's suggestions for getting a lighter crumb and better oven rise. Well, the oven rise definitely worked, however, the crumb was very similar to the one I got using Robertson's extended autolyse. This one was a tad lighter but not by much. This might have been my fault as I think I cut the bulk ferment by one hour and the retarded proof by 3 due to work commitments. Anyhow, here is what I did:

1. Sifted ww flour and white ww flour to extract the larger pieces of bran. I ended up with 250 g each of sifted flour for a total of 500 g.

2. Used all of the bran to make 3 builds of a levain, each 4 hours apart. Put into fridge for about 36 hours.

3. Pulled the levain out of the fridge and let it rest at room temp for 2 hours. No action so I put it into the oven with the light on for an additonal hour where it rose about 25%.

6. I then did 3 sets of 30 French folds (slap on the counter and fold method I am guessing) 30 minutes apart and then 3 sets of 4-5 folds, 30 minutes apart as well. That took 2 hours. I then let the dough rest for another hour where it looked like it has risen about 25%. This was in a large bowl so it is hard to judge. I think I need to get a straight sided tub so I can be more accurate.

7. I divided the dough, shaped it loosely into rounds and let rest for a half hour. I then shaped it and put it in the proofing baskets what were dusted with brown rice and AP flour. The baskets were put into plastic bags and then into the fridge for a 9 hour proof. I had to unexpectedly go to work today even though I am retired. I substitute as an elementary school principal when needed. So the loaves got only 9 hours of proofing rather than the planned 12 as outlined by DBM.

8. Oven was pre-heated to 500F for 45 minutes. Loaves went into dutch ovens. Twenty minutes later, the temp was lowered to 450F. Lids were removed at the half hour mark, and then the loaves were baked uncovered for 20 minutes. I removed them from the DO and put them on the oven shelf for the last 10 minutes to colour more deeply.

The flavor was awesome and I do like the chewiness of the bread. I just wish I could get a much more open crumb. The Tartine 3 book shows a very open crumb and I am jealous I can't seem to achieve this with the similar flours that Robertson uses. I may cut back on the high extraction flour and include more AP flour to open things up. Here is the required crumb shot.