I’ve had this bake on my list for sometime.  I saved the recipe when I read through his book months ago along with a couple other of his recipes.  I have to say that we quite enjoyed the texture and flavour of this bread.  Very rustic with a new chewiness and that nutty sweet flavour that durum semolina has.  I used semola rimacinata flour as is typical for this bread from what I’ve read.

A couple of notes, I didn’t quite get the shaping right.  I believe a tad too much flour on the fold along with the fold not quite going far enough lead to the top part of the dough sliding down during the bake as the oven spring happened.  Also, the recipe says to bake for 30-35 mins.  Despite baking for 45 mins I found at the very center of the loaf that there was a tiny bit of crumb that wasn’t fully baked.  I’d probably bake a bit longer by 5-10 mins next time to ensure a deeper colour to the crust and a fully baked crumb.

Here’s the video I put together, enjoy.

I love anything with Semola! I’ve seen various postings over the years of that shaping. Yours looks beautiful. c

about this bread back in 2015 and the postings by Michael Wilson, David Snyder, Abe (his post is no longer) and Brad (breadforfun) began a small cascade of interest.  Of which I partook myself.

But if your proclivity leads to wanting to make these as baguettes, for some inexplicable reason I did 🙄. Capriciously I used a rye levain so it kept the durum down to a "mere" 89% - https://www.thefreshloaf.com/node/48790/pane-di-alfansomura

*NB - Not ignoring Benny here, his bakes are generally fantastic.  So I'll just comment on his bake as "wash, rinse, repeat".  There.  That should cover it!

Thanks for sharing both Brad’s and your posts Alan.  I can see why people become interested in this bread with its unique shaping and wonderful flavour.  As you know, I believe you are the one who got me started baking with semola rimacinata with its wonderful colour, flavour and texture.  I know it would be sacrilege but this bread is just crying out for some sesame seeds.

Thank you Caroline, I didn’t get that forma alta shape that I was going for, but it turned out alright in the end.  I’ll give it another go in the near future to see if I can get it right.  The flavour is wonderful though.  It had been a long time since I baked a semolina bread given my dive down into whole grains so it was due.

I love using durum in my breads as you probably know by now.  I can’t remember if I tried this shape but I probably have at some point.  You’re probably right as to why you had issues but in the end it doesn’t make it taste any different.  I’m surprised your color of the crumb is not more yellow.  Maybe your flour you used?

I just returned a few weeks ago from a short trip to Vermont where we of course went to KAF and loaded up on all kinds of goodies including their fine milled  durum flour.  I’ve been milling my own but the price increases in durum grains convinced me to hold off on replenishing so I will make a bread soon with the KAF flour.  You might like this one from a long time ago I made https://www.thefreshloaf.com/node/35841/100-durum-semolina-36-hour-method.  It was definitely overproofed but I do remember how tasty it was.

Thank you Ian.  You’re definitely right, the shaping issue didn’t affect the wonderful flavour of this bread.  In regards to the crumb colour, it is more yellow than the posted photos show.  The white balance of my camera is thrown off by the LED lighting combined with natural light, if I correct for that the crumb actually is more like this, more or less. 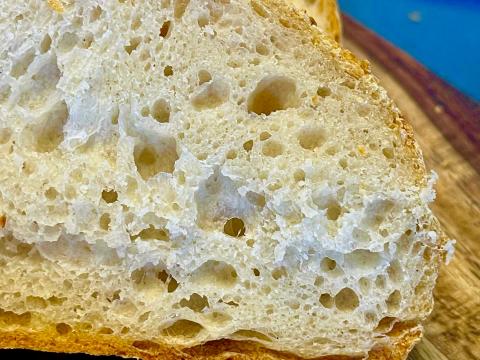 Your recipe looks great, I didn’t retard this dough at all, I tried to follow Daniel Leader’s recipe as close as possible.  I’ll make adjustments in the future.

Given the recent heat in NYC, I decided to try your fantastic long cold method, Ian.

I got nice loft but, due to some time constraints, wound up under-fermenting it. I also didn't get the shattery crust and lofty crumb I was aiming for. I am experimenting with a dutch oven these days and this has been a continuing problem -- the trade-off seems to be better rise but inferior crust and crumb. Of course, it could be that, since I am doing most of the fermentation in the cold to avoid dough going haywire on the table in the insane heat and humidity, I'm skipping many of the stretch and folds at the start of the process -- and I guess my laziness has prevented the dough from developing all those miraculous characteristics that make bread so great. 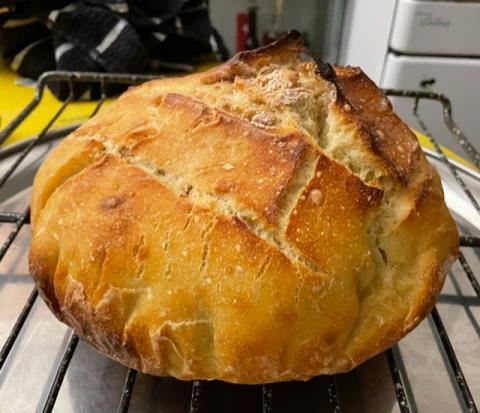 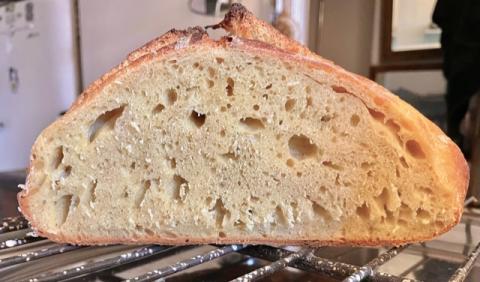 I liked this enough to do another bake of this with the only change really being the shaping.  I decided that since I wanted to make sandwiches for dinner with this bread I’d shape it as a batard. 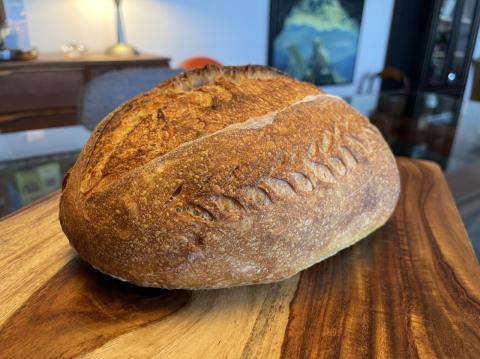 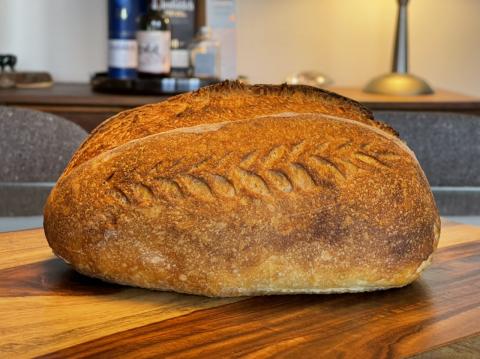 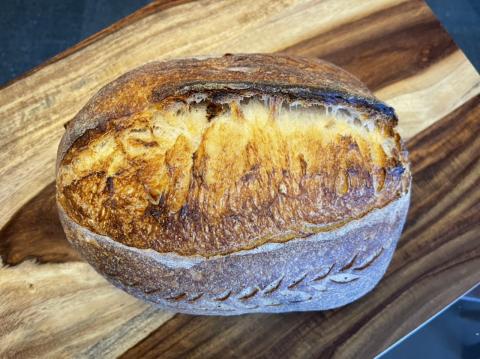 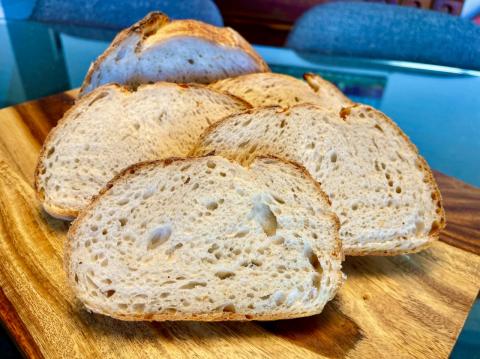 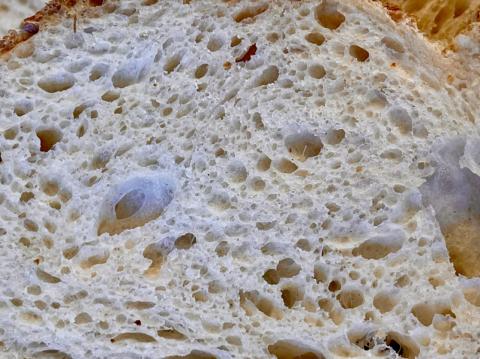 I had an extra 140 g of this dough that I was going to make into some rolls.  My partner wanted toutons so that’s what I did.  Are you familiar with toutons?  They are a Newfoundland dish typically eaten for breakfast with molasses.  I’m not a fan of molasses and the dough was ready at lunch time so I made toutons with it.  The 140 g of dough was divided and shaped into small boules and left to fully ferment.  Once ready they were pan fried in my cast iron skillet with butter until golden brown on both sides.  They look like English muffins but are so much more delicious if you ask me.  This is a great excuse to make extra dough! 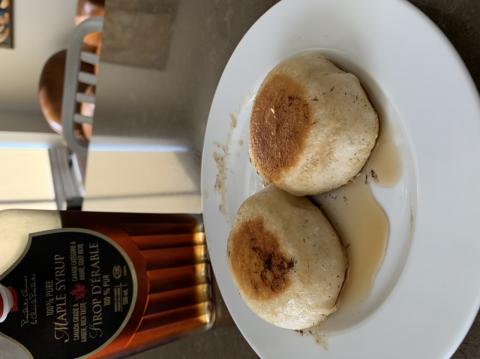 Never heard of them but they look delicious.  What does the crumb look like?  Is it similar to en English Muffin?

Because this one was 100% semolina, the crumb wasn't as open as one would expect for a typical English muffin.  They are delicious though, who doesn't like pan fried bread?