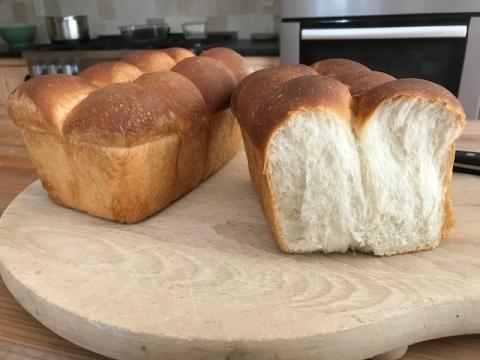 Back in February, when @DanAyo posted about his experiences with an unexpected (by me, anyway) style of enriched sourdough posted by @txfarmer in 2011, I decided to give it a try. My own experience with the formula after quick scans of Danny's and @txfarmer's posts was unsettling, but ultimately produced 2 loaves of a very light, white and shreddable sandwich bread. I had difficulty and no small amount of anxiety with the relatively dry levain, a super wet dough and sluggish gluten development.

With the last slices of the February loaves finally disappearing from the freezer, I thought it was time to revisit the bread. This time I had the patience to thoroughly read through Danny's and @txfarmer's original posts and subsequent comments. Suspicions I had during my first attempt at the bread were confirmed by a more careful reading of the audience dialogues that focused on ambiguities of @txfarmer's original post.

I developed the stiff levain (71% hydration) over 3 12-hour generations starting with 5 grams of my 100% hydration standard starter. My previous attempt resulted in a rather dry, crumbly lump that didn't really change much overnight. This time I hand-kneaded the levain at each generation to ensure complete hydration and the dough rose into surprisingly puffy masses at rest. I'm still a bit uncertain with using milk in a levain destined to 36 hours on the kitchen counter, but I noticed no unusual smells or tastes, so I'm guessing LAB and yeast action are to thank.

Reviewing my notes from the first attempt, I had spotted something that sent me back to the original posts. I had not included the egg whites (24% of flour weight) in my hydration calculation. Dopeslap (facepalm?) time. So I had actually produced a 95% hydration dough. No wonder I never got a windowpane and nearly threw the whole mess out.

This time aroundI let the KitchenAid gently moosh up the levain in most of the formula's milk for a few minutes. Mixing the dough seemed much less unusual and I actually got to a windowpane (though I question whether it was a @txfarmer stage 3 windowpane) after 20 minutes of KitchenAid 2-4-6 thrashing. The dough nearly cleared the bowl in the final minutes.

After 2.5 hours of bulk with 4 sets of coil folds and 17 hours at 37º, I scaled and shaped16 75 gram balls setting them into standard loaf pans in the style of brioches nanterres. The rose nicely over a 4 hour proof at 80º. This in contrast to the 7 hour proof of my 95% hydration first attempt. 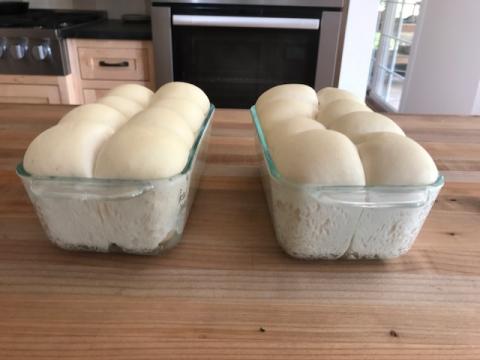 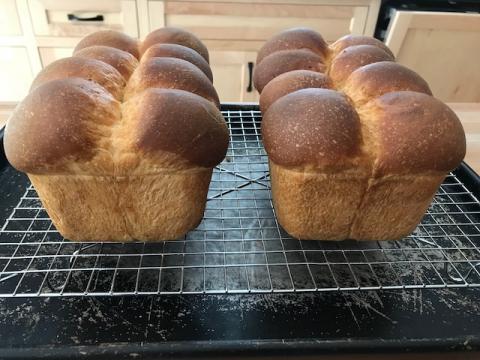 I'm still amazed that I accidentally got a decent result with my February 95% hydration dough. The crust on that batch of bread seemed exceptionally crisp but delicate. This current batch has a less crunchy crust, so the excess hydration in the February loaves must have contributed in some way.

Very nice bake, beautiful loaves you baked up.  Great lessons to be learned, thanks for sharing your experiences that we can all learn from.

Gorgeous rolls...the height on those is impressive!  It would be great to see your specific formula posted here as I'm sure others would be interested as well.  I was trying to jump back and forth between the 3 posts and it got a little confusing.

"Sourdough levains do not have to always yield chewy, crusty breads."--I agree 100%!  I've got an everyday sourdough roll formula that I bake pretty often, and the rolls turn out light and fluffy (although nowhere near as tall as these).  That recipe calls for 1 whole egg, but I think I may try to use 2 whites next time based on your results and this formula.

Thanks for posting...what a lovely bake!

Per my interpretation of @txFarmer's original post. I've summarized data in tables for readability.

Levain at 71% hydration. Target 19% of total flour built over 3 12-hour generations. All liquid except 3 g water in original seed starter is milk.