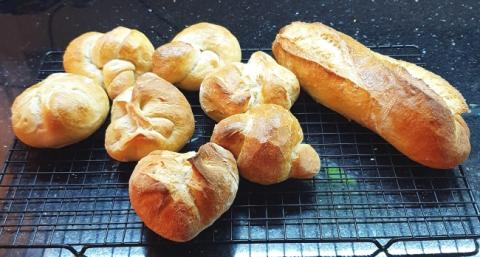 While looking through my copy of "Manna" for a particular recipe, I chanced upon the chapter entitled "Vienna Bread". Vienna bread became very popular throughout most of Europe towards the end of the 19th century, with the arrival of roller milled white flour, compressed  yeast and steam injected ovens.

It is characterised by a soft, fairly tight crumb and a thin crispy crust and is usually made as rolls or small batons.

I thought it was time I tried my hand at it. Banfield usefully provides a recipe using just 1.5lbs of flour - ideal for the home baker. I did have to think for a minute about the 3 gills of water in the recipe. A gill in England was a movable feast: a gill of beer is considered to be half a pint, but a gill of spirits is a 1/4 pint. A quick reality check on dough hydrations and it was obvious that this was 3 x 1/4 pint gills or 426ml. The dough is enriched, with a small amount of powdered milk, sugar and lard or butter. 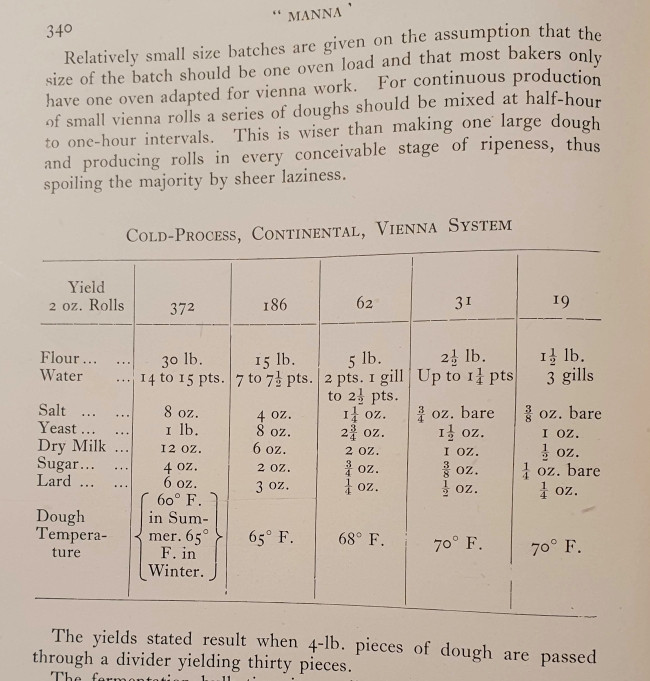 Regarding flour, Banfield disparagingly talks about London Vienna bread, made with a high proportion of very strong flour so a "giant balloonic sphere can be presented to the public". After such a comment, I thought I should keep the proportion of Manitoba flour down to 25%. I didn't want Mr. Banfield turning in his grave. For the rest, I used Matthews organic bread flour. The spec sheet says it comes from Kazakhstan and/or Ukraine, so fairly close to Vienna... and it is not particularly strong. 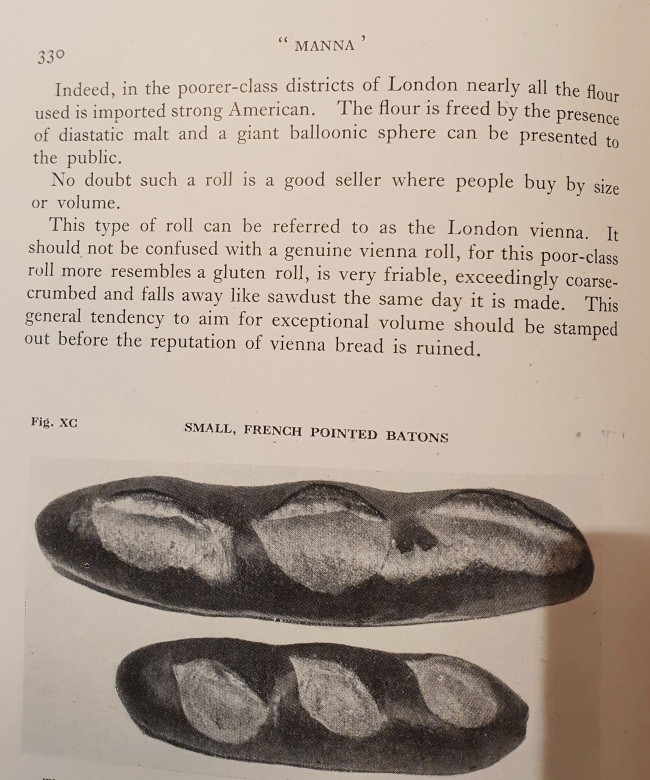 I'm afraid I can never get the hang of Kaiser roll shaping, and the stamp is a poor substitute; I prefer the crescents and knots! 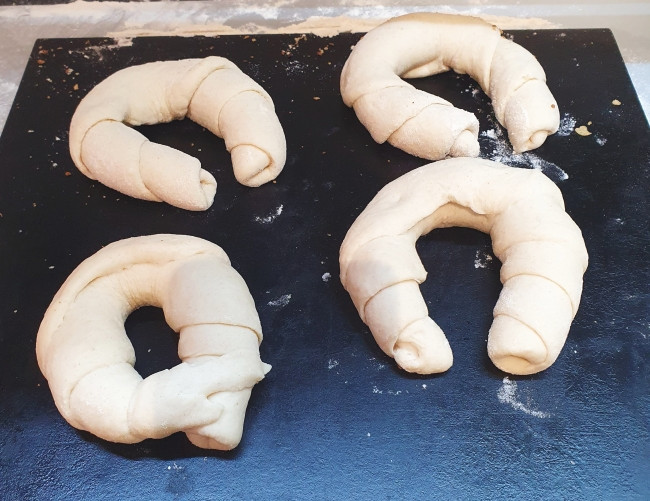 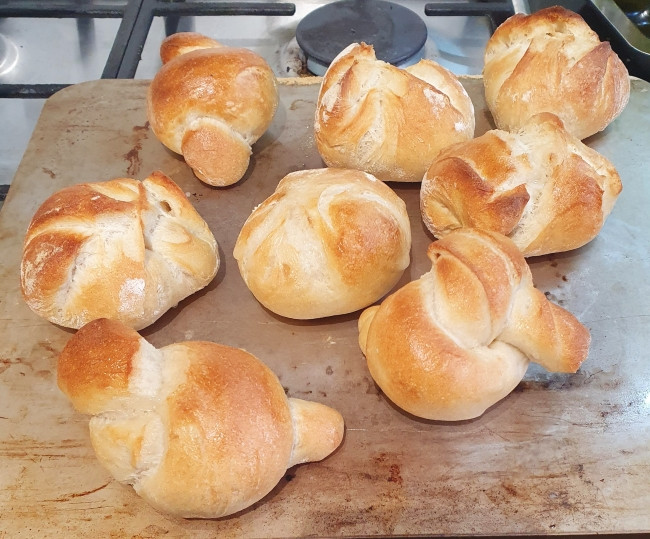 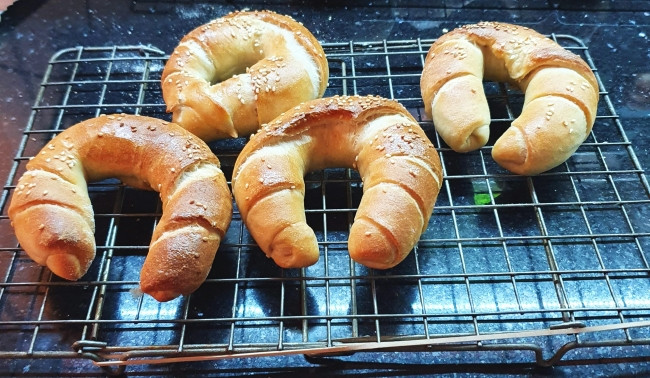 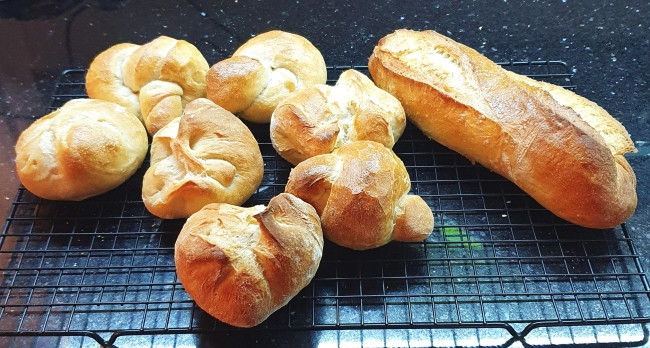 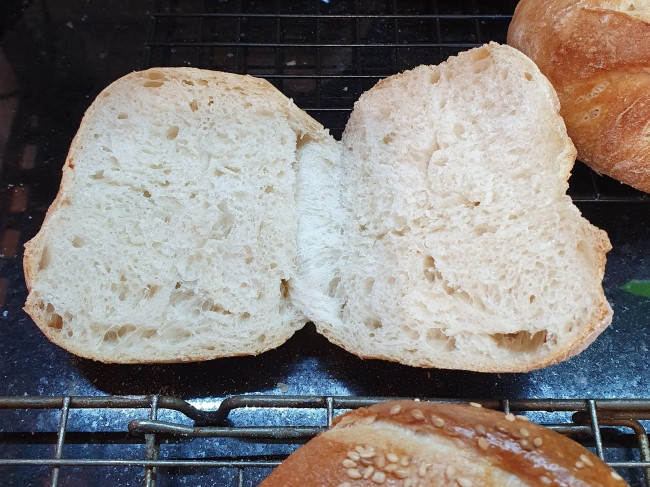 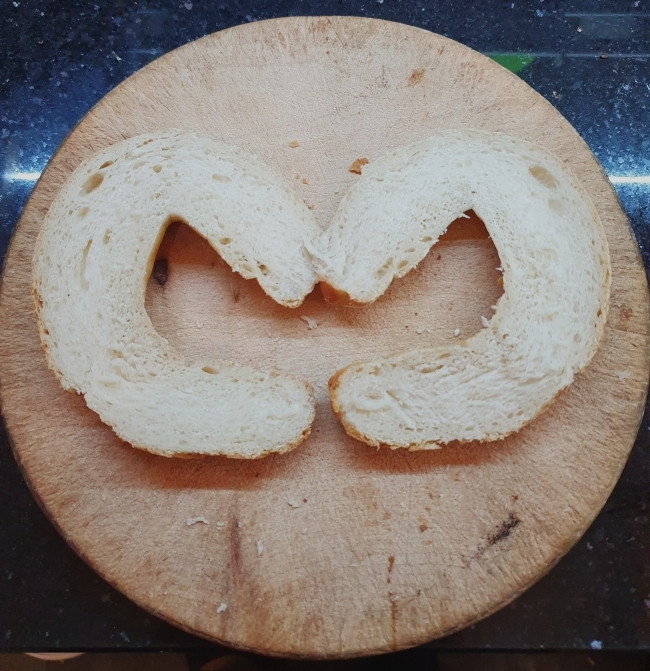 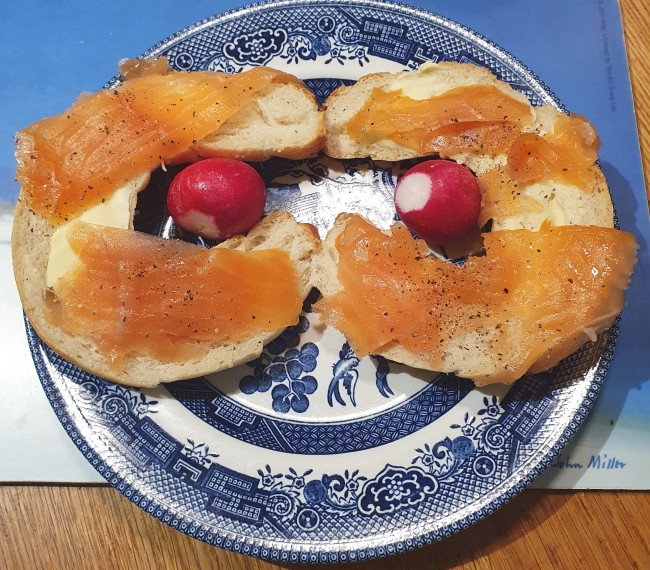 They look lovely Lance and do remind me my trip to Vienna quite a few years ago where I ate so much of this bread I don’t really remember eating anything else.  If I saw the reference to a gill I’m really not sure I would have figured out what they were talking about.  You sure did a fine job figuring that out and baking great Viennese rolls.

What an interesting bake and your ability to determine the measures certainly exceeds mine! I love Vienna rolls . Paper thin slices of fine ham with butter and those radishes… heavenly. c

Wonderful that you could determine the measures of water! A thin slicing of fine ham and butter with the radishes would be heavenly! c

I know what you mean with getting the hang of shaping kaiser rolls. I've decided to make myself a template because I need a few reminders and a practice piece everytime I want to shape them.  Lovely horns.  This dough makes a great bretzel.

I used to have a pot holder the right size, round, 6 to 7 inches across to practice folding. One main trick is after shaping (use rye flour) turn the roll star side down on the lightly floured counter for half the proofing time to keep the shape together.  (Can also lay them star side down in seeds.)

I will make a separate post and cut out a circle from one of those flatish square kitchen sponges.  Will put notes on the wettex (or whatever it is called) to remind me of the folding steps to pull out just before making the rolls to do a few "dry runs" before shaping dough. Hubby is always teasing me but if I don't make them often enough, I need a reminder without abusing the first few rolls. Lol!

That sounds like a good plan, Mini. I've watched plenty of videos, but they don't seem to help much.

I know the first fold is over your thumb, but I start to get lost after that. It doesn't help being left handed and trying to follow right handers...

What I would like is some step by step line drawings - easier to follow than a video, I think. Does anyone know of such a thing?

like the very middle of the flattened disk and knowing the proportion of dough to first fold over the thumb.  Videos are often too fast.  Let's see what I come out with.  Use a mirror to view the left hand version of any right hand video or pictures.  Some computers can reverse pictures before posting.

I see you tried a few kaiser folds then gave up.  That's my point.  I tend to do that too. That's why I want to make and mark a '"cheat sheet" and share the DIY info.  Just keep it away from the cleaning rags.  :)  (Now if anyone was paying attention, they might come out with a kaiser roll instructional pot holder to market.)

I look forward to your product, Mini!

Stumbled across this beauty,  I havent listened to it yet, because I can often see more watching without the tone.  Use the mirror to view the folding if left handed.

One of the better ones I've seen and nice and slow.

I'm always amazed at how much flour they all seem to use when making Kaiser rolls. If I used this much I'm sure the dough would never stick to itself at the folds.

Still, getting near time for another go.....

The difference between 5 & 6 is a slight flattening of the center and pressing the roll together.

I could definitely give that a go!

Nothing like getting some old time recipe working.  There's a You Tube channel "Townsends" where he dresses in the fashion of the day and recreates recipes from the 18th century.  https://www.youtube.com/user/jastownsendandson/videos

I don't now if there is any relation to what you are baking here, but Abel Sierra posted his Pain viennoise on TFL in 2018.

Thanks for the links Alan; I'd forgotten about that bread of Abel's - even though I made it! Abel's dough looks to be a lot more enriched than the one I used this time.

Of course, there will be many recipes....

Thanks David - so much of what we bake has been done before. The current round of enriched doughs a lot us have been making remind me very much of the old fashioned British tin loaves that were the norm in the UK before the Chorleywood process ruined the flavour.

Very interesting post!  I love the history and then seeing your excellent results.  I've been experimenting with rolls lately, both yeasted and sourdough (looking for more grab-and-go options for a couple of my kiddos)...I'd like to give these a try as they look delicious and nice and light.

How did they taste and what was the crust like?

Thank you Leigh; the taste is a typical yeasted white bread flavour, enhanced by the enrichment - I used butter. To me, that is a good flavour, provided the fermentation is a decent length and the flour is good quality. The crust was indeed thin and crispy. Of course the key to this is  goodly amount of steam.

Yes, give them a try and let us know how you get on. Here is a link to a small handbook (free of copyright) on Vienna bread which is worth a read.

Thanks for the archive.org links. What a great idea. I've bookmarked them and, after a brief skim, look forward to enjoying them more fully.

I've been listening to 1930s-40s radio off archive.org for about a year, amazed at the wealth of resources there and the opportunity to sample life from bygone eras.

I must check out the radio stuff; is there anything relevant to bread baking? I've browsed Youtube for old (1920-1960) videos of small British craft bakeries, but there's not much other than big plant bakeries.

At the risk of historical baking book overload, this old TFL post has a lot more. I've downloaded a few, but not looked at them yet.

I did some digging but found nothing in radio other than incidental stuff.

But my archive.org skills are not that strong.

Ok more respect for you. I read some of the 1880s books and they don't even give measurements for flour for bread recipes. I had to reread a few times to realize it was all by feel. Amazing work to patiently interpret and get success from those old sources.

Thanks David; I can't claim too much interpretation of quantities, because I tend to follow recipes mainly from Banfield and Kirkland and these have well defined recipe quantities. These were the first two historical baking books I came across and I still think they are the best.

One thing that does stand out is the low hydration even for tin (pan) loaves in these old books - sometimes only 54%. It is tempting to increase this drastically, but I found this was not always successful. Of course American flours will behave differently....

It's a shame that Manna is out of print - I'm sure that there would be mileage in a new edition, with introduction, notes, glossary (it took me a while to work out what cones are!), hydration and home recipe versions.

The kind I'd like to see in a bakery window!

Thanks for posting details and pictures of that book, it looks very interesting. Might see if I can track down a copy at a reasonable price...

Yes, Manna is a fine book and I highly recommend it to anyone who has a historical interest in breadmaking.

The Modern Baker Confectioner and Caterer volumes by John Kirkland are also worth a look. I don't have print copies of those but they can be d/l from the Internet Archive

I was confused until I remembered it would be a British pint:

(Extra decimal places left in to provide a good chuckle for my mentor, phaz. ;-)

Yes indeed Dave - the imperial pint! An easy one to get caught out with - and of course its knock-on effects into the two different volumes of gallon.

For general interest: Peter Reinhart's "Bread Baker's Apprentice" has a similar recipe for "Vienna Bread." And Norm Berg and Stan Ginsburg have 3 formulas for "Vienna Dough" differing in degree of enrichment in their book, "Inside the Jewish Bakery." I use the "medium Vienna dough" for sandwich rolls and double knotted rolls. The formula Lance found is a leaner version.

Regarding Kaiser Rolls: I believe the traditional version is made from a round piece of dough folded over a stationary thumb in five leaves. I have seen pretty good videos of the process on youtube but haven't watched them for a few years. I'll look again. FWIW, Norm Berg, a retired professional baker in NYC, may he rest in peace, made a video. I have a link, but I'm not sure it is still viewable. I'll check that too.

Addendum: This link is to a blog entry of mine from a few years ago. It contains links to two youtube videos of Kaiser roll shaping. Both are in German, but the procedure is clear and is done slowly enough. Enjoy! Kaiser roll shaping

Thanks David - I'll take at look at the shaping links. I enjoyed making those rolls; something a bit different and a lovely dough to work with.