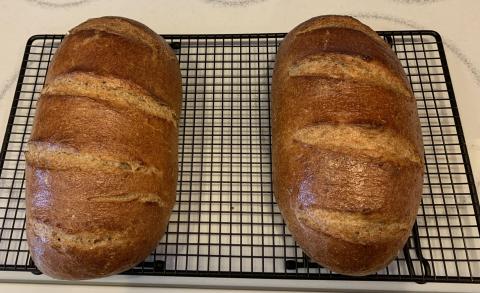 Had the opportunity this weekend to make a couple of loaves that I've been wanting to try.  First time breads are SO MUCH easier when you have a detailed method to follow, and I certainly have to tip my hat to Gavin for his explanation of Debra Wink's 100% WW loaf and David for the detailed method of his Jewish Sour Rye.

I followed the recipe exactly as described by Gavin.  Based on Gavin’s suggestion, I increased the flour and went up to 425g total flour for a single loaf.  For my whole wheat, I used mostly KAF, which has the ~14% protein content called for by Debra Wink, but I also added some flour from a local mill.  The method was very easy to follow and went as described.  This was my first time using Roasted Black Walnut oil, and it added a very nice aroma and flavor to the finished loaf.  I think the only thing I would try next time would be holding back 25-50g of the flour and mix it with the oil.  I wonder if it would make getting the oil into the dough easier.

At the end of the bake, the internal temperature was 190 deg F, and I think I should have gone for another 5 minutes.  The crumb is just a little bit on the moist side but is not gummy at all.  It is tender with no bitterness.  A good tasting loaf!

Mix: Combine all ingredients except the oil; combine until flour wetted; cover a refrigerate for fermentolyse to keep dough cool

2 sets bowl kneading: Slowly add oil; continue kneading until oil worked into the dough; place dough in lightly oiled container and refrigerate and let dough double overnight; take out after 12 hours and bench rise for up to 2 hours if needed (<73 deg F).

Stretch and Fold: Degas dough and fold; place back in bowl and let double again in cool room (<73 deg F)

Pre-shape: Degas dough and shape into a boule 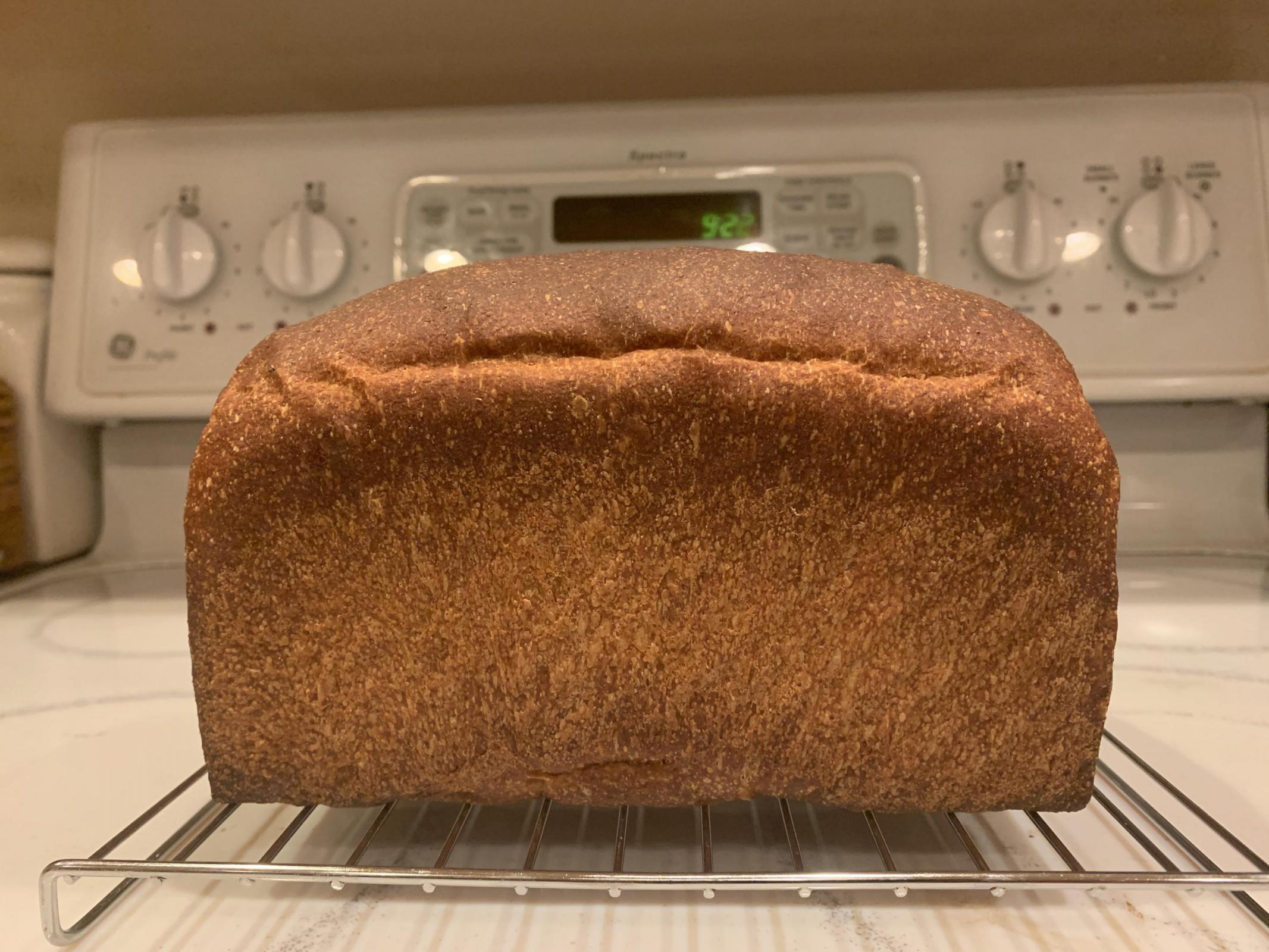 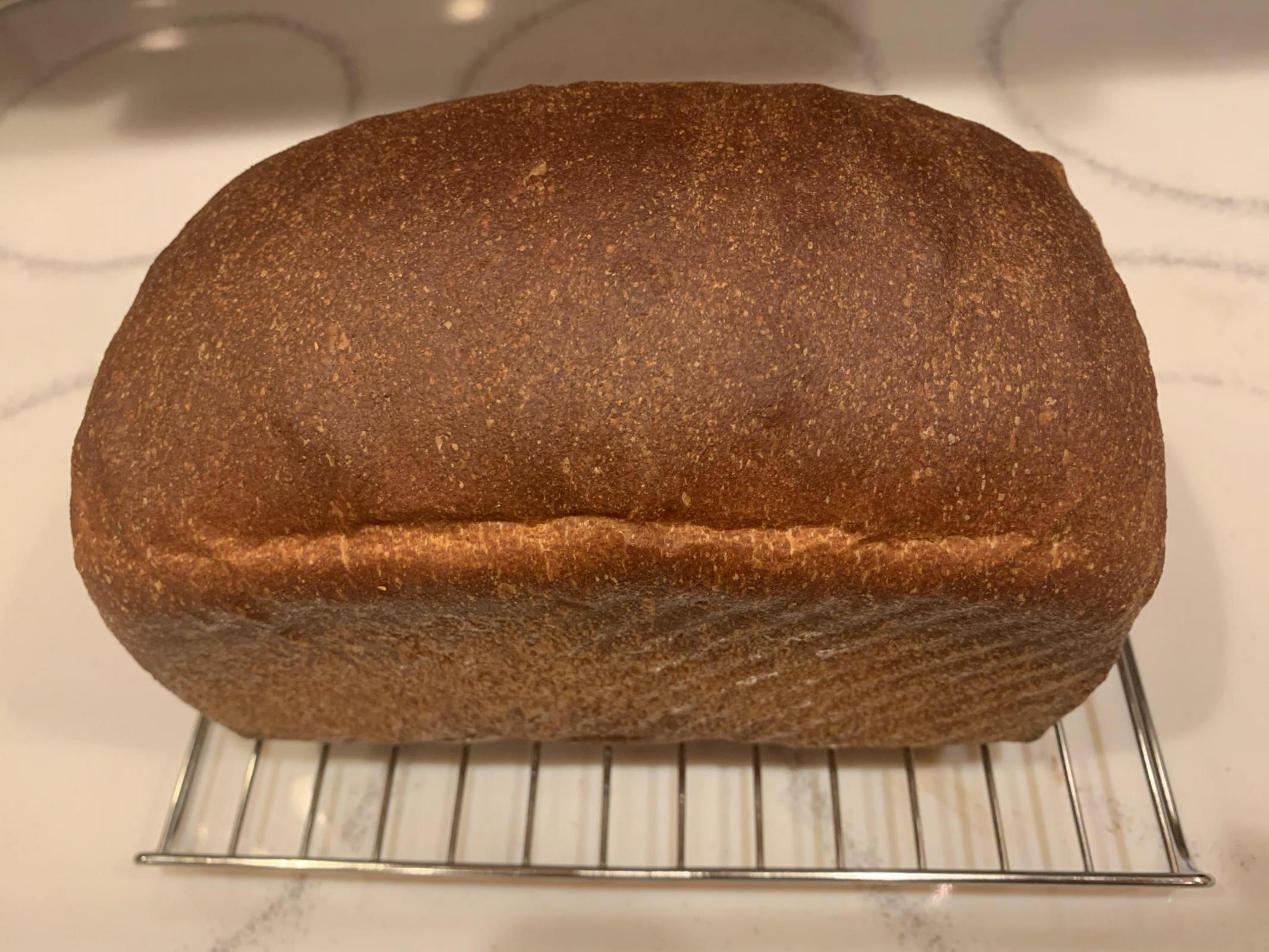 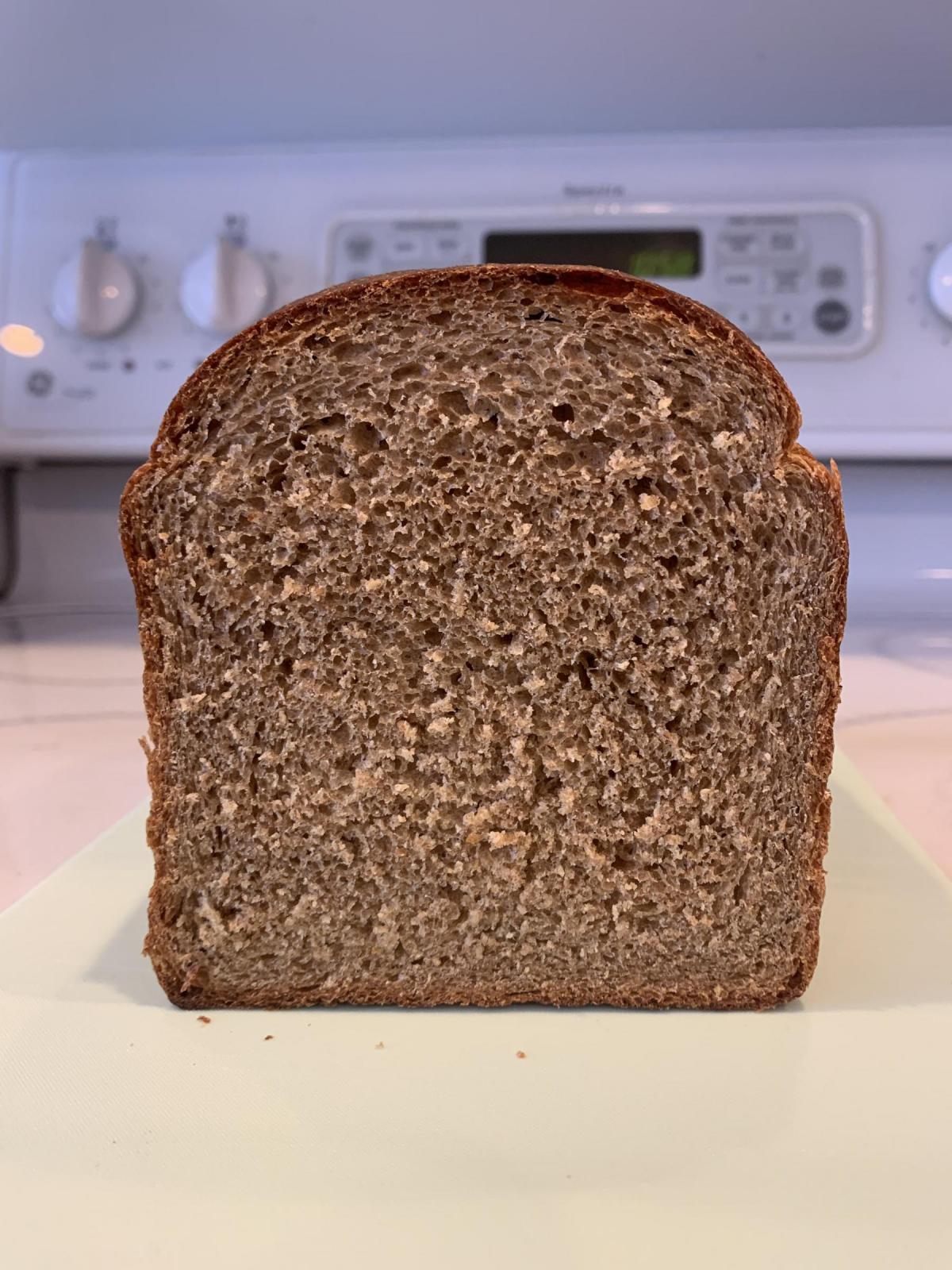 Likewise, I followed David’s method exactly with one exception.  I used multiple sets of bowl kneading with short rests instead of bench kneading on a floured surface.  I think it went quite well and I was surprised at how easy the dough was to handle.  I was expecting a sticky mess with that much rye, but it wasn’t bad at all using the food prep gloves when kneading.  I used a 3-part build on the Rye Sour starting with my white starter and KAF medium rye.  I added some fresh milled whole rye on the final build.  It progressed well, and the final build was done in about 4 hours.  The Rye Sour was refrigerated overnight.

I’m happy with how this turned out for the first attempt.  I used bannetons for the final rise, and I wish I would have tried a free-standing loaf.  The doughs were close to overflowing the bannetons when I baked them, but I think they could have used a little more time, which would hopefully open the crumb a bit more.  I was surprised that there wasn’t any noticeable caraway aroma coming from the cooked loaf.  Just a very nice rye.  However, it definitely comes through in the sliced loaf, and can’t wait to have a grilled turkey rueben with this bread!

David has a very detailed description of the method in his blog post, so I won't duplicate it here. 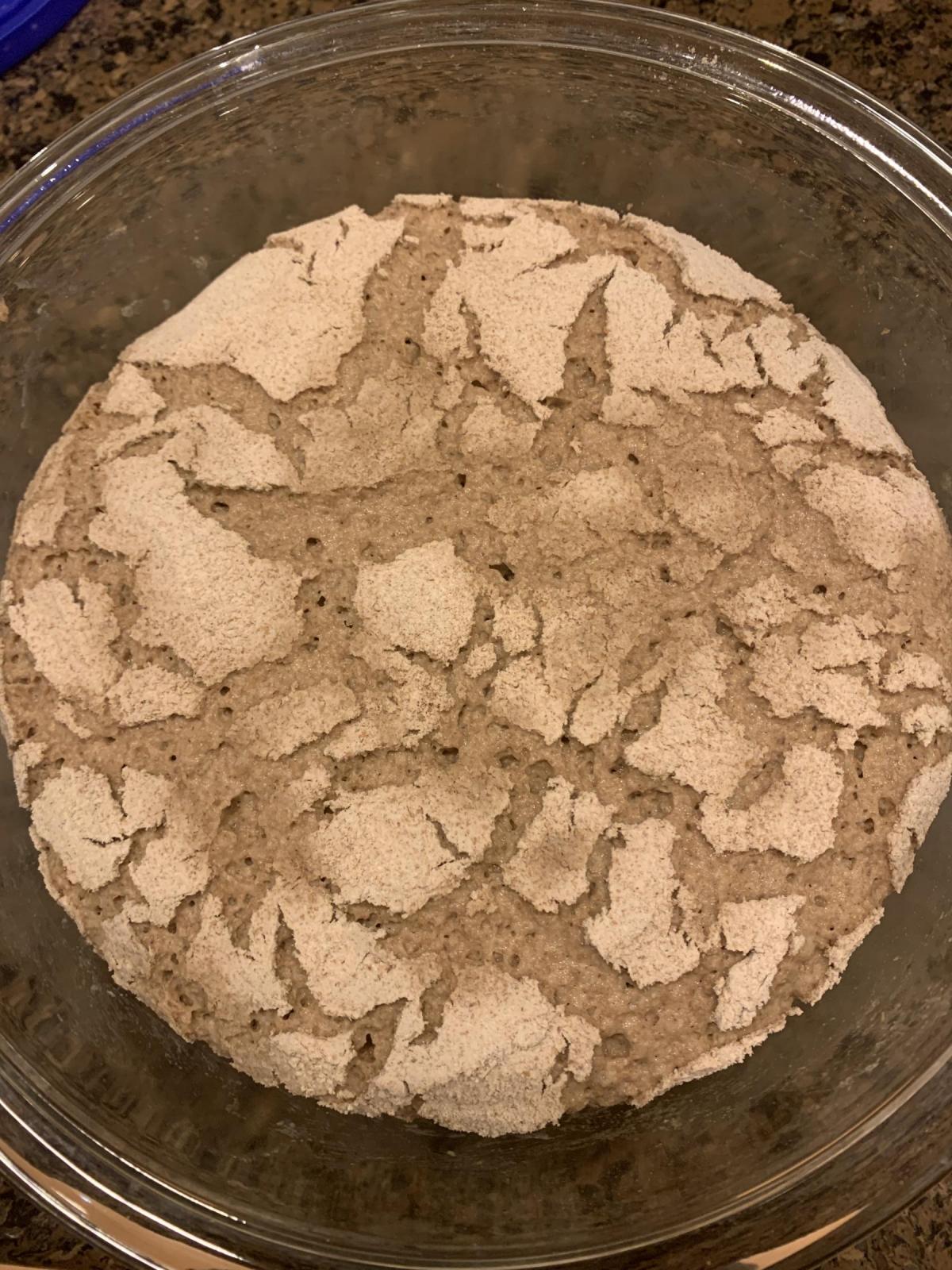 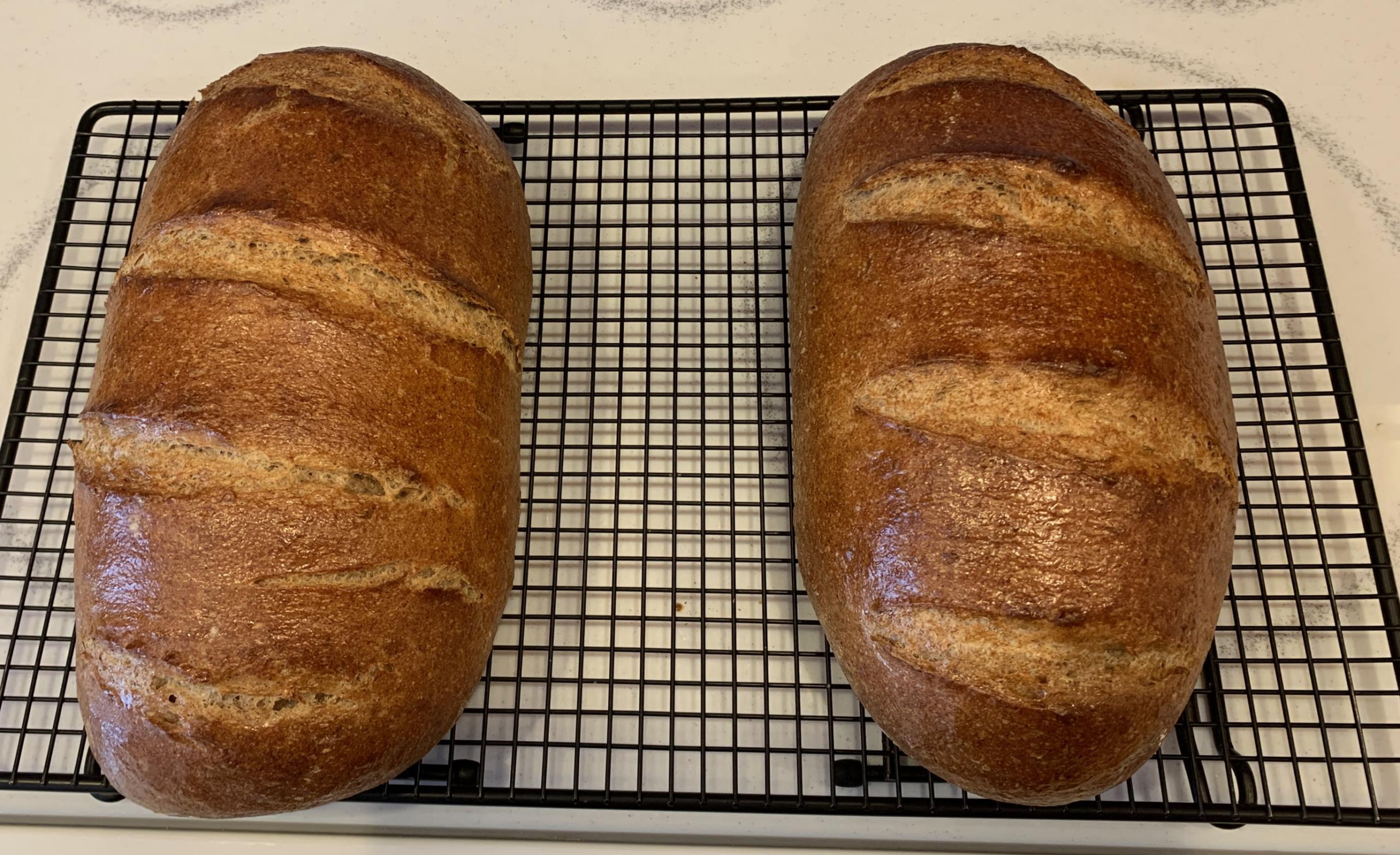 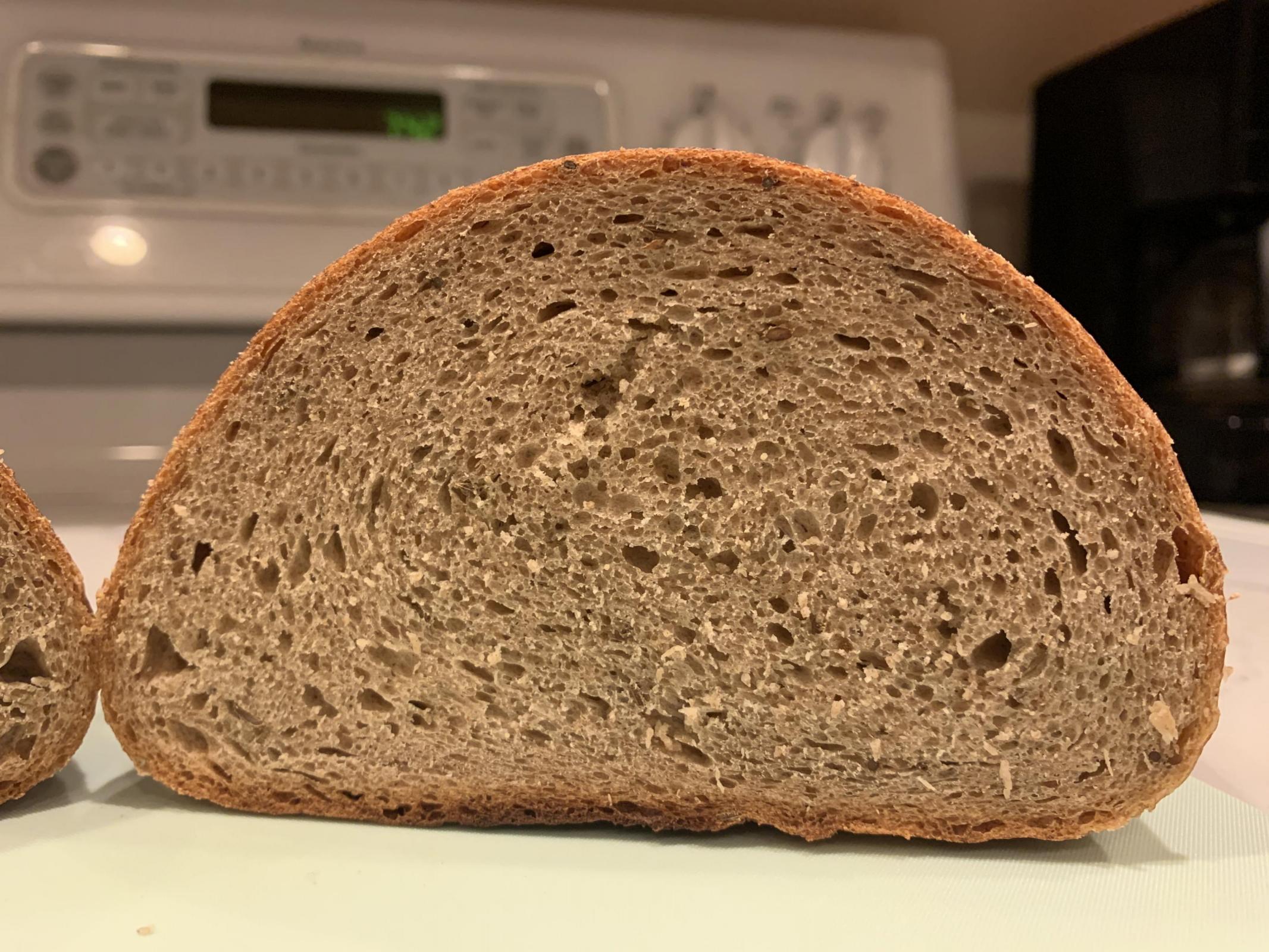 This is one of my favorite methods.  It’s slow and forgiving, and it works well on a day when you have distractions.  I usually do the mix at lunch time and the final proof in the late evening.  I follow the same formula and substitute different flours for the whole grain.  This time, I used fresh milled Kamut.

The doughs came out of the bannetons a little different.  One was already kind of short and fat, so I scored it with four horizontal cuts, which helps it elongate during the bake.  The other I scored so it would open wider.  I created a time lapse video of this bake.  There isn’t as much noticeable spring in the elongated loaf as it started a little taller and it tended to expand longer.  Both of these loaves are spoken for and were just baked this morning, so no crumb shot.

Mix: Hydrate Kamut flour 1-2 hours before mix; combine all ingredients including salt and mix until flours are just wetted.

1 set of bowl kneading: 24-30 folds to develop a medium gluten

Bowl Stretch & Fold: Every 60-90 minutes until dough starts to get “puffy”; usually takes me about 8-9 hours 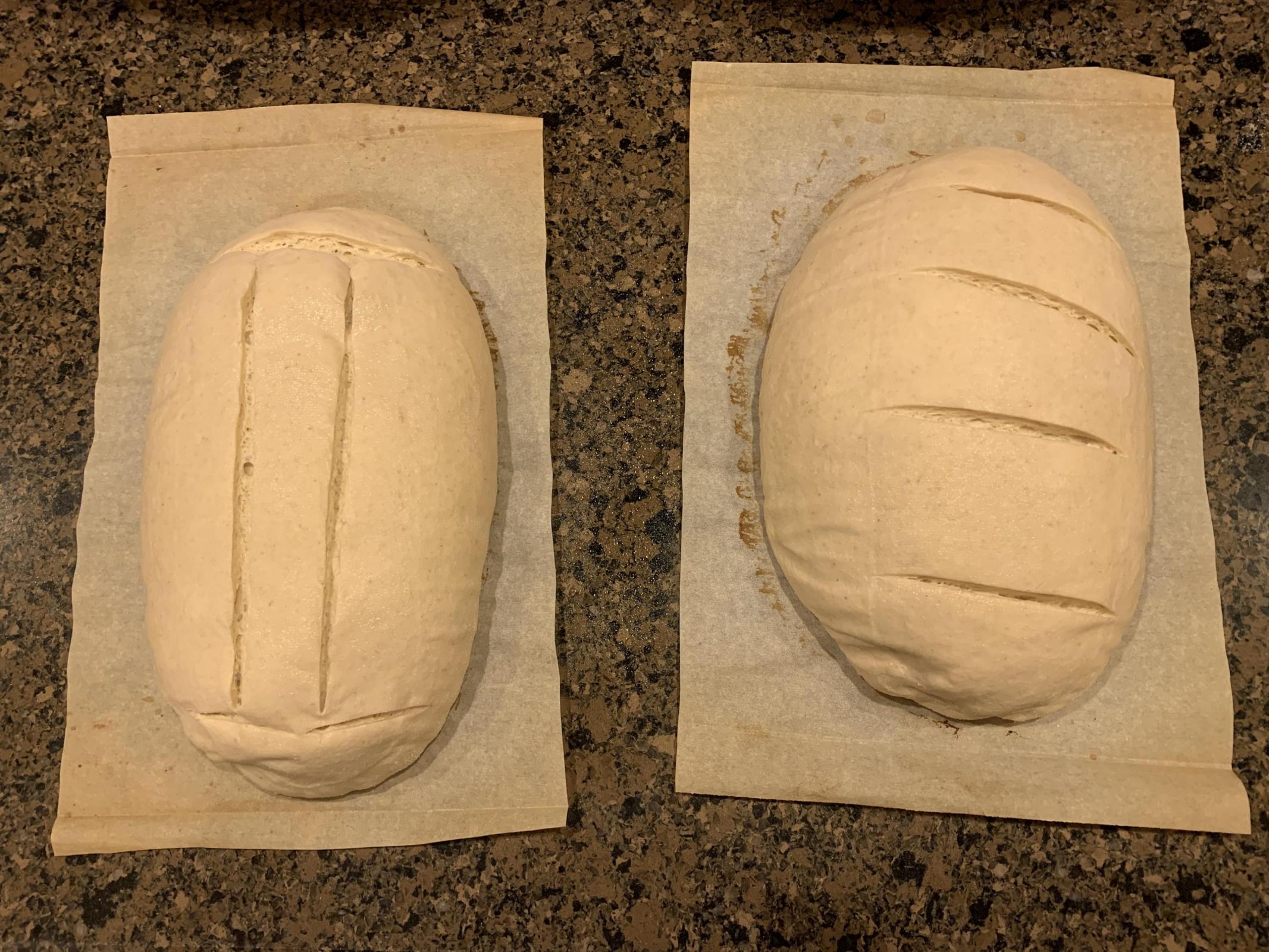 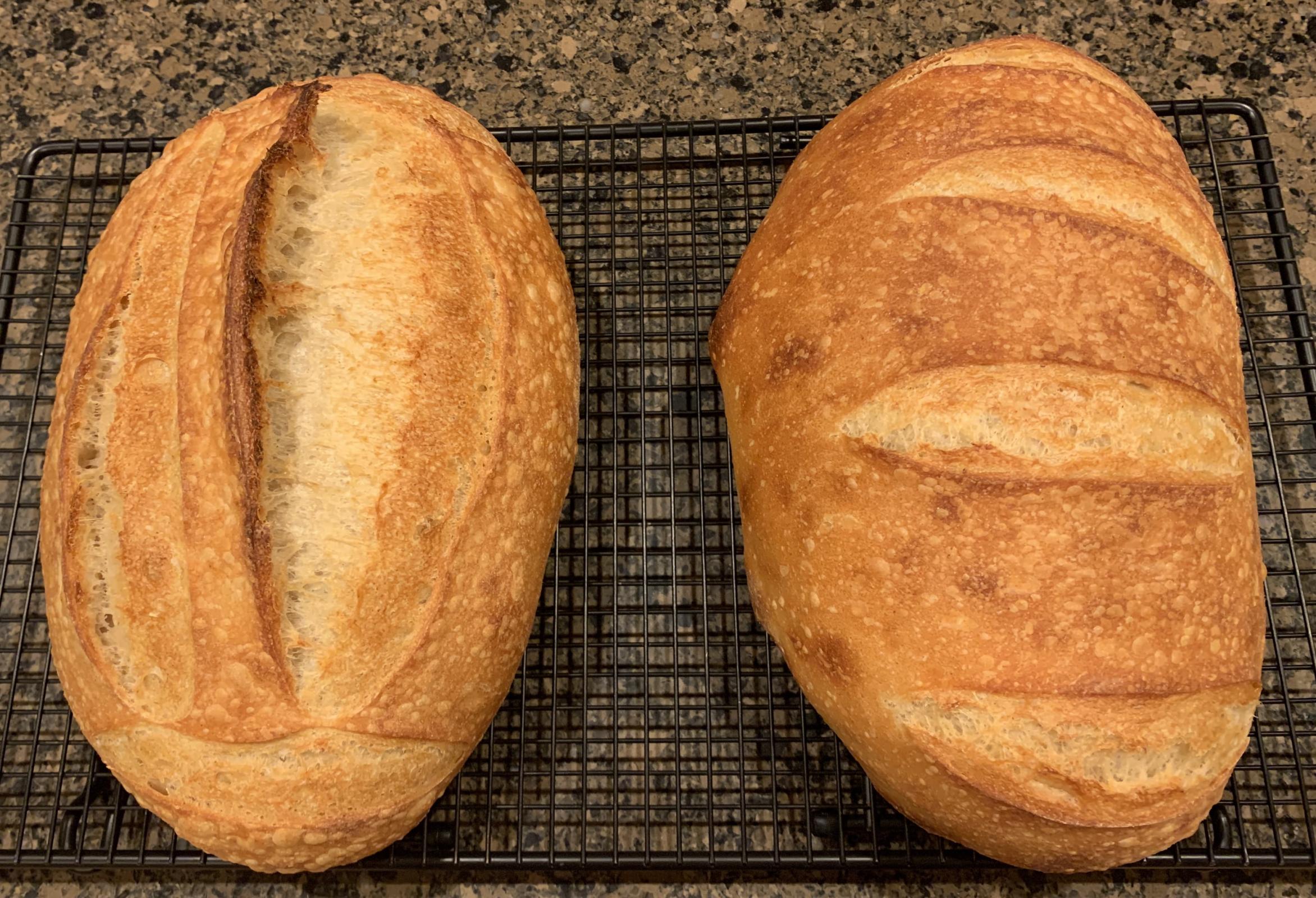 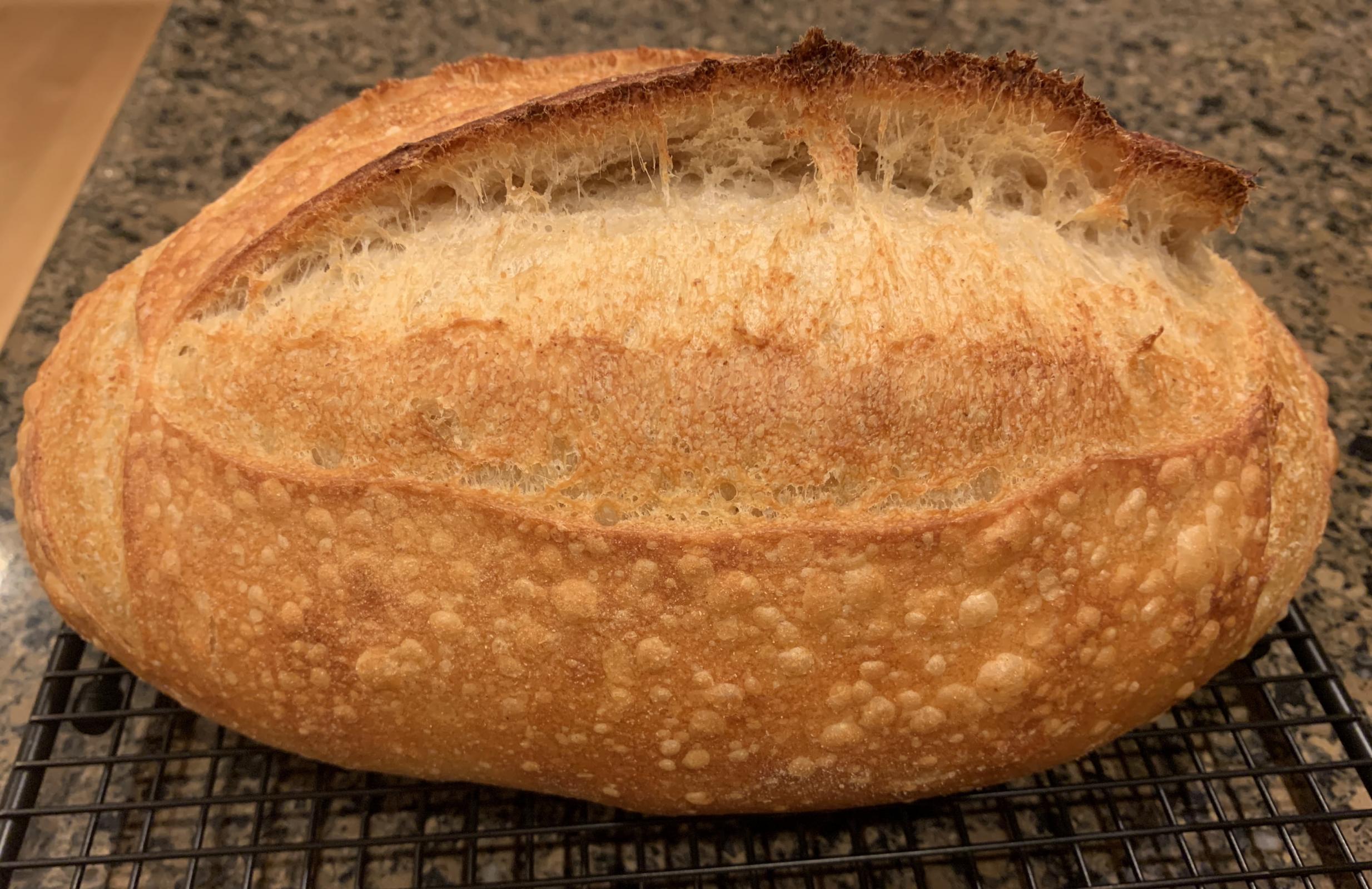 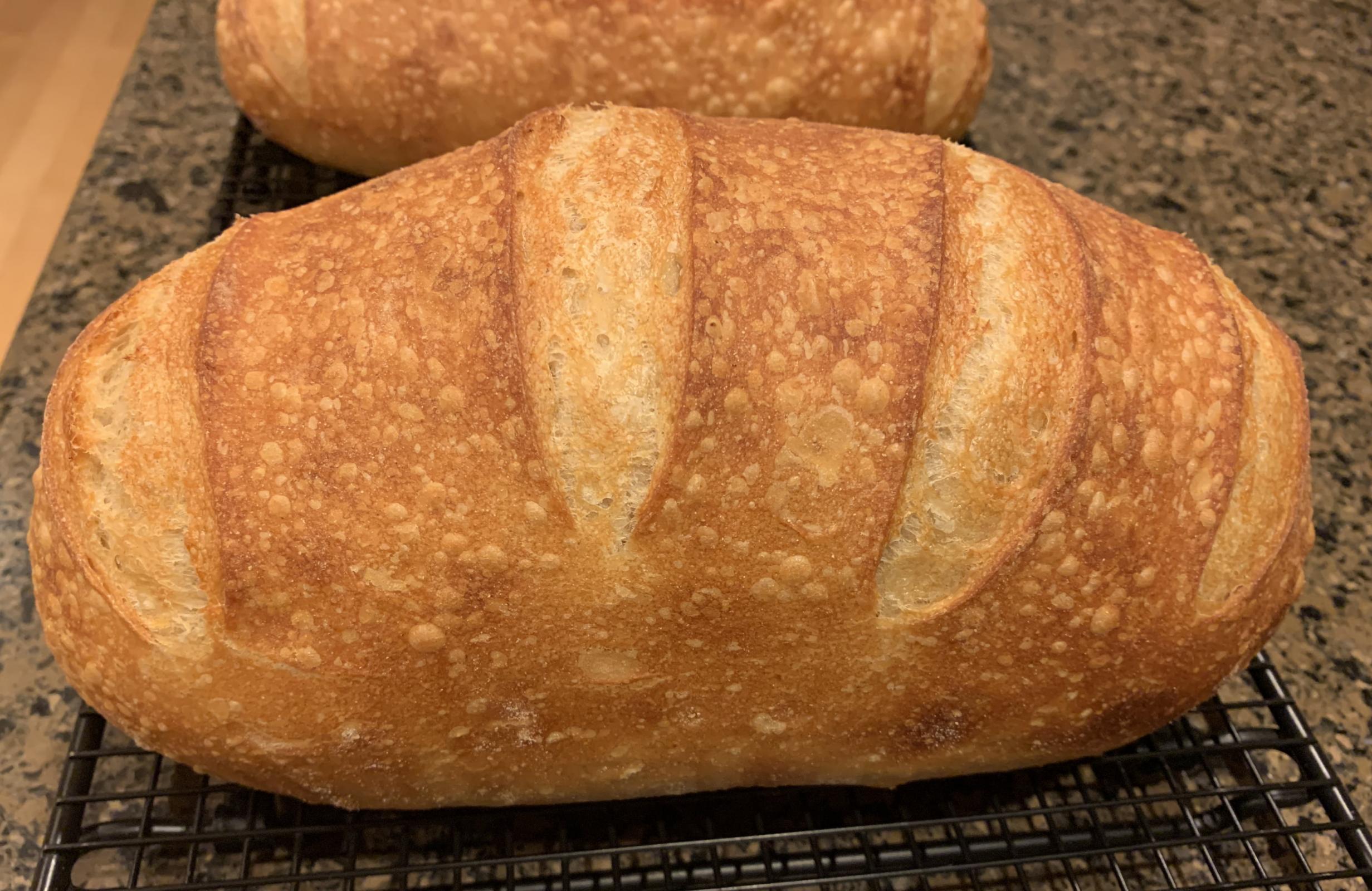 Tasty crust on those kamut loaves. How does kamut compare for flavour and texture to other grains?

FYI re caraway... recently I was quite amazed at how toasting, grinding and scalding caraway produced floral notes in a rye bread. Amazing aroma and different flavour.

Thank you David.  Ironically, I haven't tried this bread yet.  I just got a mill a couple weeks ago and this is my first time making this bread.  Both of them have already left the house, so I'll have to make it again to try it.  :-)  It smelled good.  Had a good sour aroma prior to baking, but the aroma on the cooked bread was mild.

Scalding the caraway is interesting!  Might have to give that a try.

You have been busy! These are all such wonderful looking breads, and I bet they taste great!!

Also, congrats on getting a mill! It seems like you had been thinking about it awhile back. Out of curiosity, what you decide to get?

Thank you Mary!  I picked up one of the refurbished Mockmill 200’s from Breadtopia.

I haven’t experimented too much with grains yet, but I did recently get an order of berries delivered.  Need to use up some of the flour I already have on hand, but will start working in fresh grains to my bakes in the next few weeks.

They look like the money shots straight out of a professional recipe book. Those Jewish Rye breads are going to make some very tasty deli sandwiches.

knocking it out of the ballpark again, Troy.

Thank you Abe and very kind of you to say.  I'm still learning a lot and some of these new recipes keep the learning curve going.  Like I said though, your VSSD is till one of my favorite methods.  ;-)   It always turns out great.

Troy, all of your bakes look perfect, well done sir.  You are still doing so well with your yeast water bakes, and not also doing some rye sours and an ADY bake as well.  Nice variety of the levains you are using.

Thanks Benny!  There are so many good bakes on TFL and I’m trying to expose myself to as many as possible.  This was one of those weekends when I just had time to try new things. 😁

Thank you Ilya.  Appreciate it!

on TFL that are can't miss - when following the "rules of engagement".  David's is certainly one of them, and I like his most apt description of the continents dividing as a gauge to the rye sour's growth.  Best to have your "mis en place" and ducks lined up or this bread will surely get away from you. Yours looks great.

If you weren't around when we had it, there was a CB for Deli Rye breads started almost exactly one year ago which you may wish to peruse with a few other absolutely winning versions posted over the course of the CB.  https://www.thefreshloaf.com/node/66523/community-bake-ny-jewish-bakerydeli-style-rye-breads

Thanks Alan!  This CB was going at the very beginning of my SD journey, but I did look through it before making this bread.  I agree they all looked good, and agree the continents dividing worked so well.  Took all the guess work on “how much has it expanded” out of the equation.  An easy visual combined with a nice sour aroma made it easy to say it was ready

All the loaves look great! I'm glad my Sour Rye recipe worked for you! Hmmm ... It's time for me to make more of these myself.

Thank you David.  And thank you for the great recipe and detailed method.  It was easy to follow and made some delicious bread!