I am presently on a diet that is soon to be complete. I am beginning to dream of Smashed Burgers on home made buns. Since the burger itself is smashed and thin, it seems appropriate to make a thinner bun. During my research I found the YouTube video below and liked the idea. Maybe this will be of interest to others.

Don’t plan to use her recipe, but her method of rolling out the dough and cutting it with a cookie cutter is appealing. Trying to eat no more carbs than necessary.

To be taken to the correct spot in the video and for best viewing use THIS LINK.

Start at 11 minutes if using the video below.

There is nothing wrong with the way she did this, after all she got nice results.  My method is different in that I  weight out my total dough and then decide the dough weight of the buns I want.  75 grams for a fat bun and 50 or 55 grams for a thinner one.  I divide the dough based on these weights and then make each divide into a ball, which I then flatten for the final rise.

Black Smith, doesn’t the dough puff up again after flattening it out?

If the bun remains somewhat thin, how would you describe the crumb? Is it tight?

I don't have any photos as I haven't made recently.  I use bun pans I got from King Arthur years ago when then still had reasonable prices.  I flatten the dough balls out to the size of the buns openings in the pan.   No they don't puff up too much because there isn't enough dough for that to happen.  The crumb isn't tight, nor is open, kind of middle of the road.  The dough I use is my typical white sandwich bread dough that I make in loaf pans.  Has some milk, eggs, a little butter, a little sugar (very little), salt, yeast and I use bread flour.  This richer dough only raises the calorie count by about 8 percent over plain dough.  A 50 gram bun is about 135 calories.

Different from purchased buns in that the dough is of much higher quality that the "wonder bread" dough used in most commercial buns.  Commercial buns are made as cheap as they can be, because they sell on price.

Not really different from what you are doing only that I divide by weigh, rather than a cookie cutter method.  I use my hands to flatten rather than a rolling pin.

I happen to have a USA burger pan. Same as KA pan. 50g sounds really light for that size bun. I assume pressing the dough down, producing a thinner bun makes a lot of difference. I’ll try 6 buns with the pan when I make them.

If you haven’t tried THIS DOUGH you may be in for a pleasant surprise. IMO, it is super special. Bakes up light as a cloud... The lady that posted this bread has refined it to perfection. Just had anyother thought. THIS BREAD is a little sweeter, but would make killer buns also. May have to try both. The neighbors get the excess. Needless to say, I am popular in the hood.

This is the dough that will be used for the buns.

Have you tried freezing any of the buns?

The dough you show is similar to what I use except it is very low in salt.  I use salt at 2 percent the weight of flour in all my bread doughs.  In pizza dough I go to 3 percent because that is what they use in Italy.  For me bread doesn't taste "right" with low salt.  Using low levels of salt of course is why some folks bake their own bread because they are on very low sodium diets.  Nothing wrong with that.

I was contemplating some sort of weight on top. Your pan idea sounds perfect. I may get a chance to try this tomorrow. I am not a fan of very thick hamburgers, meat or buns. Love smashed burgers!

Yes the commercial black sheet were reasonably heavy  and  produced i nice flat even bun. Probably quite easy to get a sheet metal workshop to fold up a couple of sheets that fit your oven.

I wanted to try different dough weights to learn which size bun I wanted to bake. Below are my results.
BTW - these were made using THIS FORMULA & INSTRUCTIONS. 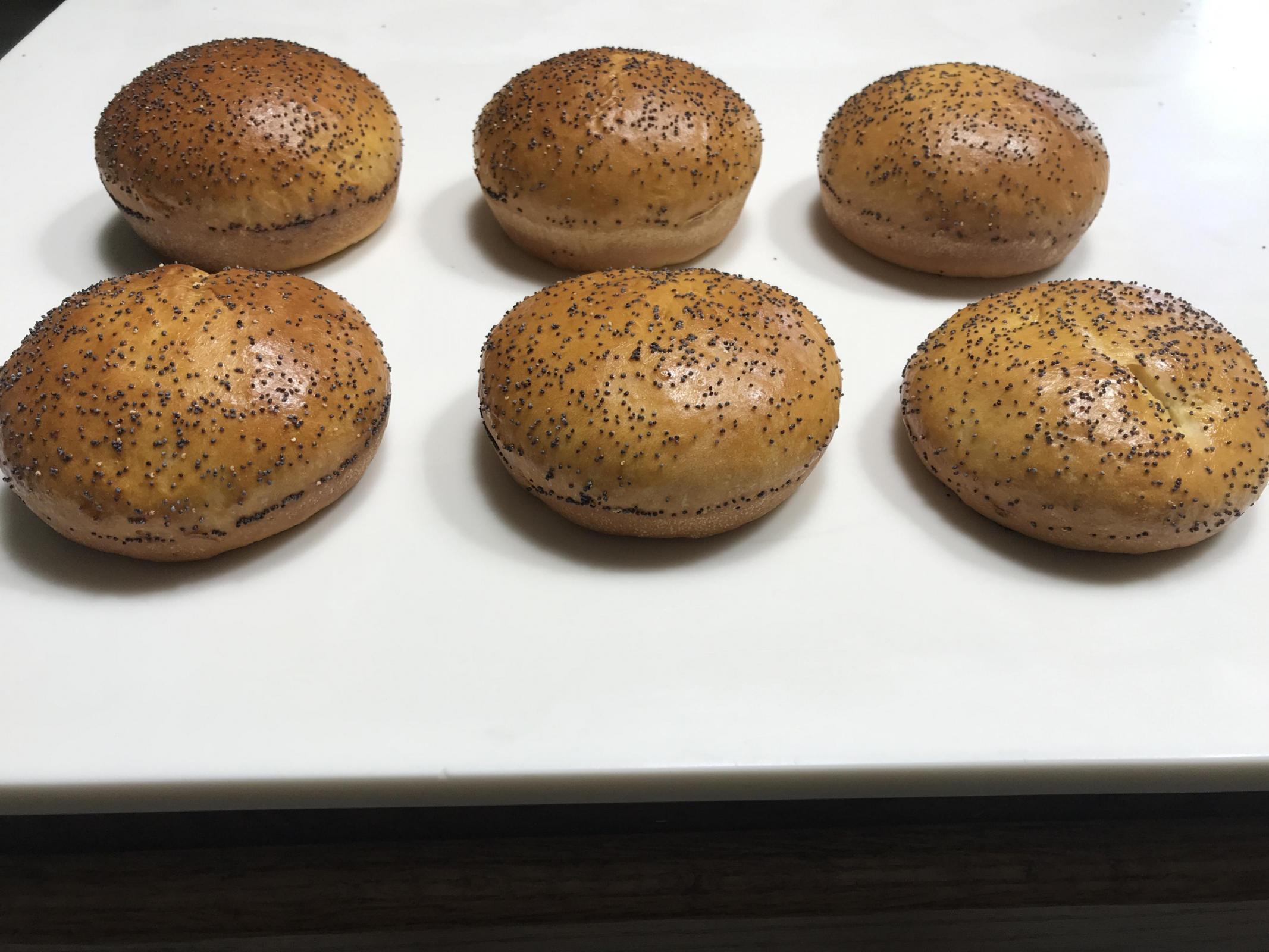 Dough weights are in same order as above. 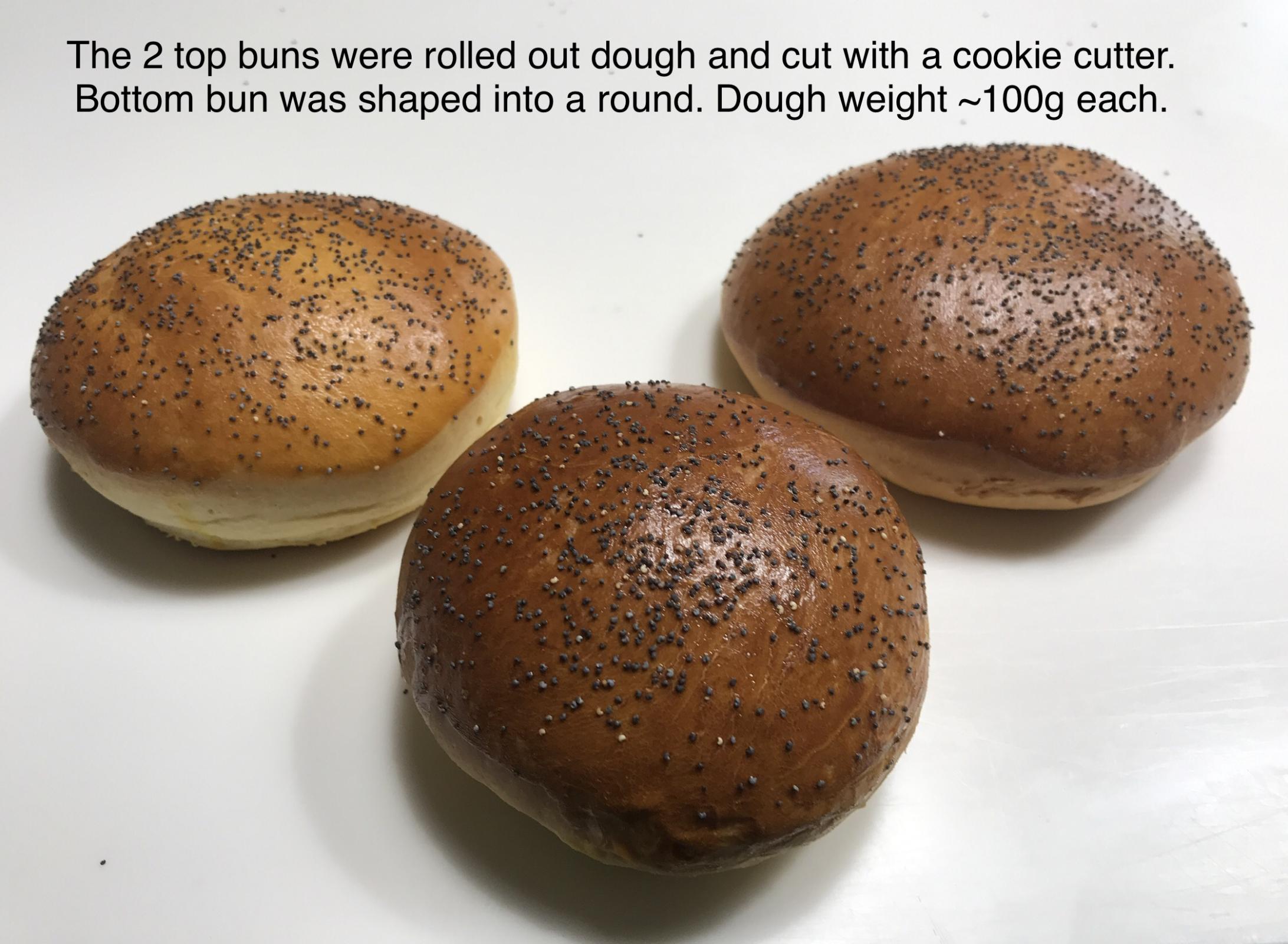 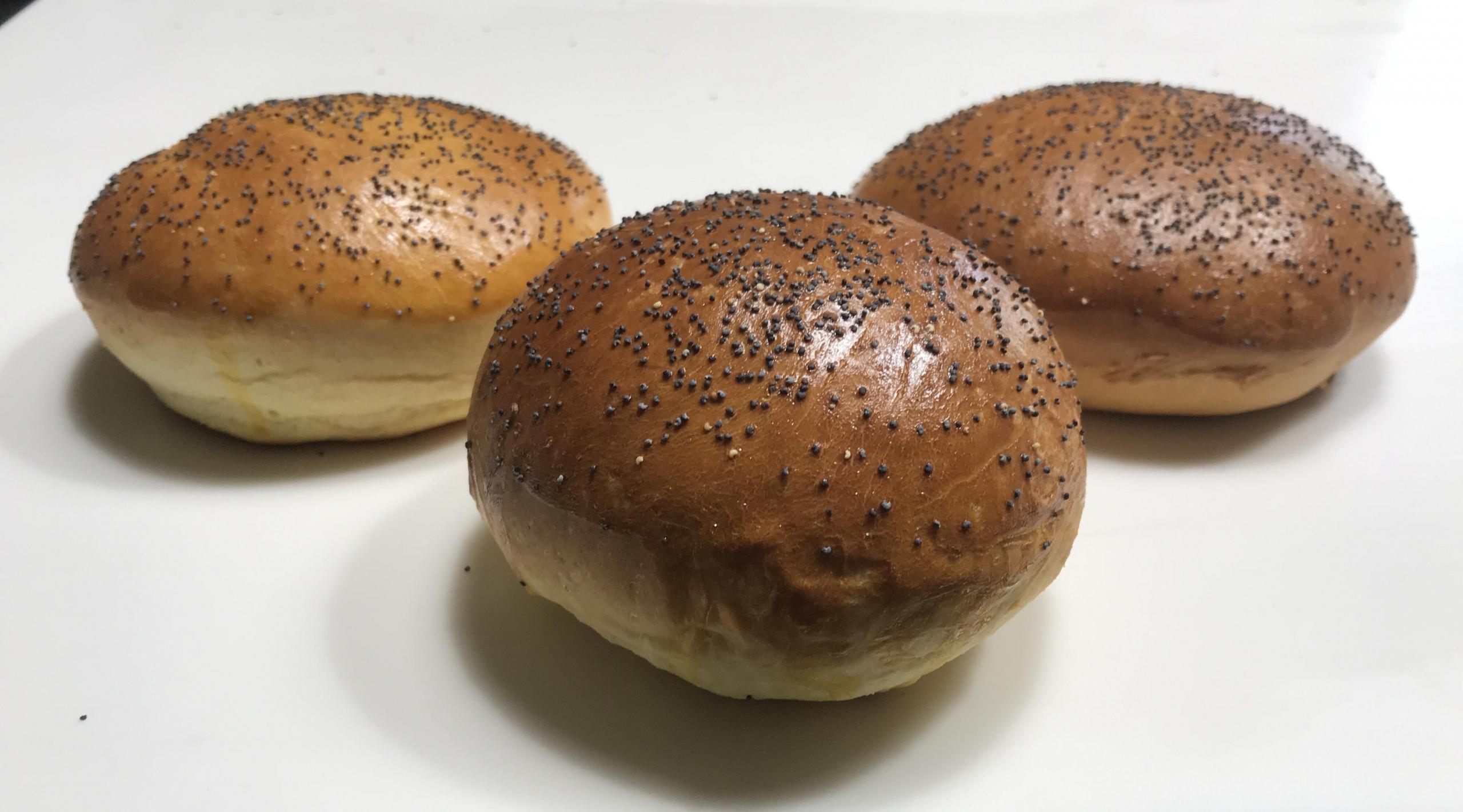