I decided to see how the new "outdoor kitchen" would do with an artisan loaf, instead of a pan loaf. I followed this recipe, with a very few tweaks below. (Thanks, @SunnyGail, for your recent post of this bread, which gave me something new to try out. 😁)

A few of my notes:

Mixed flour and water, left covered at room temperature 4 hrs while we went to lunch with family and ran an errand (which was not supposed to take so long, lol)

Hand mixed salt and starter into the autolyse. Bulk fermentation 5.5 hours with hourly coil folds as he recommends. Aliquot was at approximately 60+% and dough was a little jiggly. I didn't want it to go much longer m, so shaped, placed in cold banetton (had pre-chilled it), placed in a bag and refrigerated overnight.

Banetton out of fridge after 14 hour retard. Toaster oven preheated for 30 min with a cast iron skillet inside. It JUST fits, lol. Lightly spritzed the dough and the inside of a stainless steel bowl with water. Baked at 450F covered with the stainless steel bowl for 20 min, then uncovered for additional 20 min.

What a goofy shape, lol! 😂 This was shaped as a batard. It spread out more than up while baking, so half of it took on the shape of the bowl. Now it looks like a boule on one side, with a flat edge on the other. There wasn't much clearance between the bowl and the bread. So when I went to take the bowl off, part of the bread had started sticking to the bowl. I had to quickly work with a butter knife to pry them apart, which left a little scar, lol. The baked bit tasted nice. 🤭 Note to self, grease the bowl a bit if I do this again. And I neglected to notice if it was the front or the back of the loaf that changed shape.

Like my previous bake, the side of the loaf closest to the back of the oven baked faster than the front. Rotating the loaf during baking helped even it out.

And this little oven does a great job maintaining a steady temperature, even after getting the bread in and out a couple of times. Likely the cast iron skillet helped even things out as well. Still, it seems up to the job overall.

Edit - crumb shot added below, and clarification of a process step above. 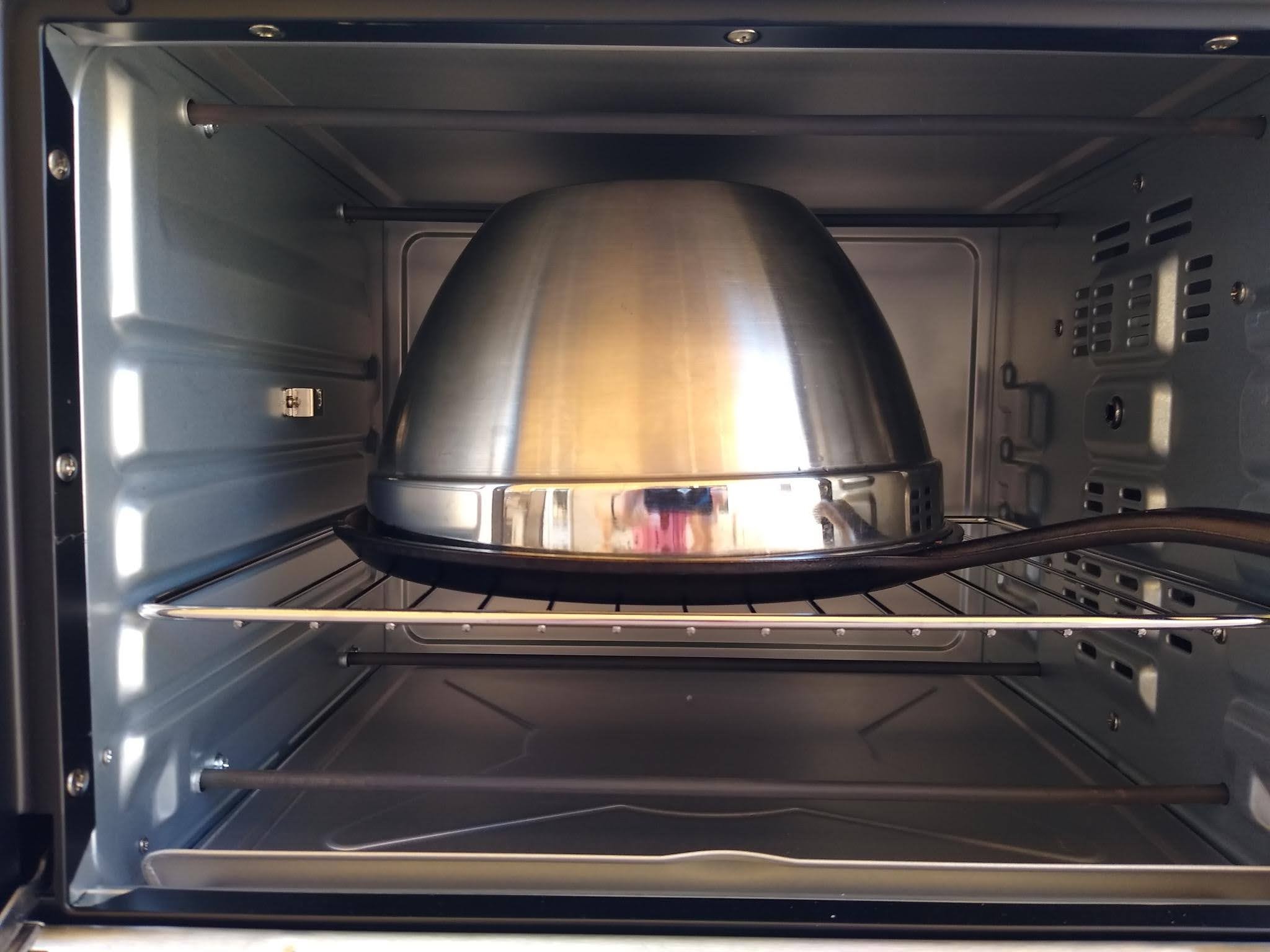 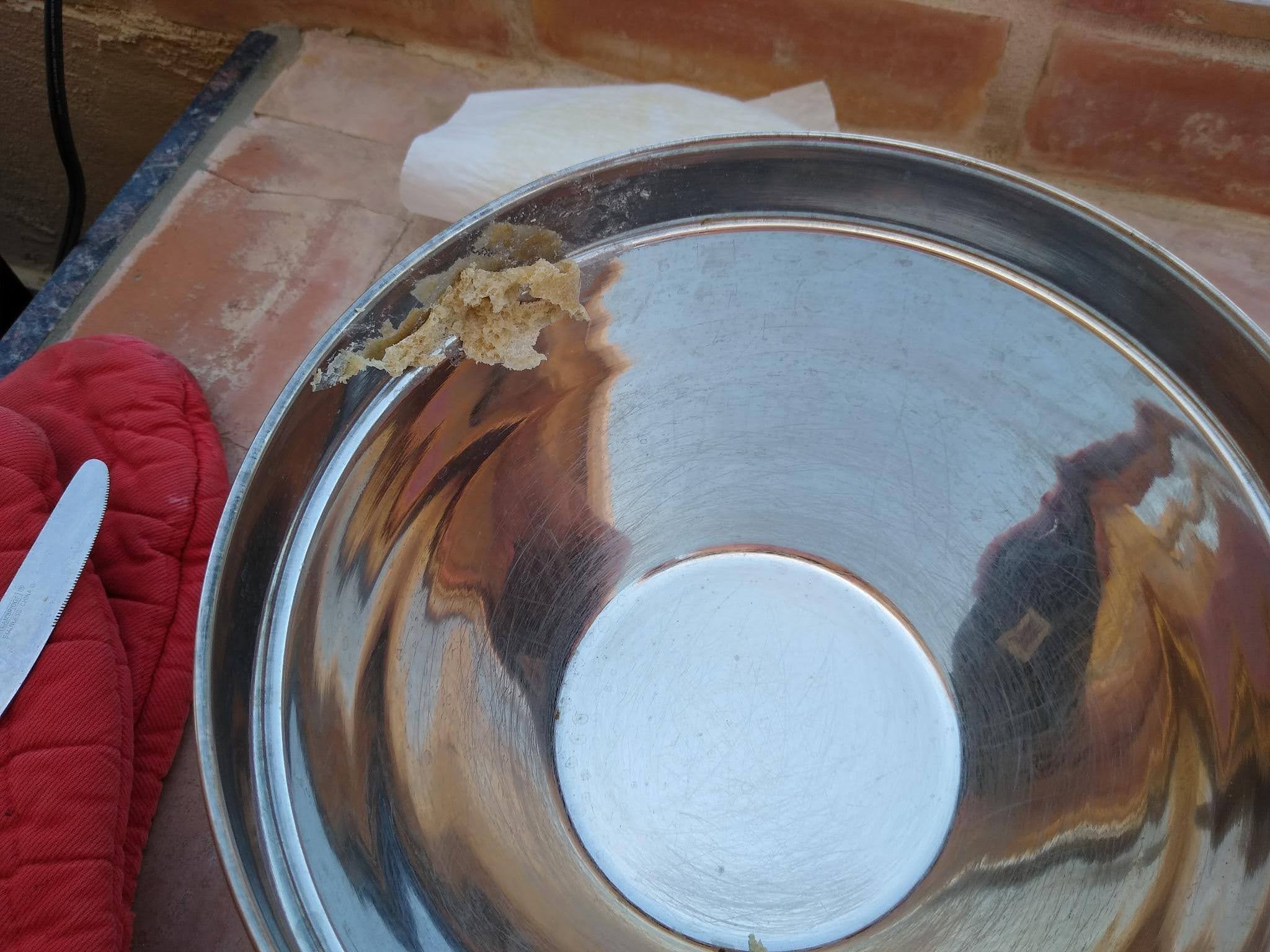 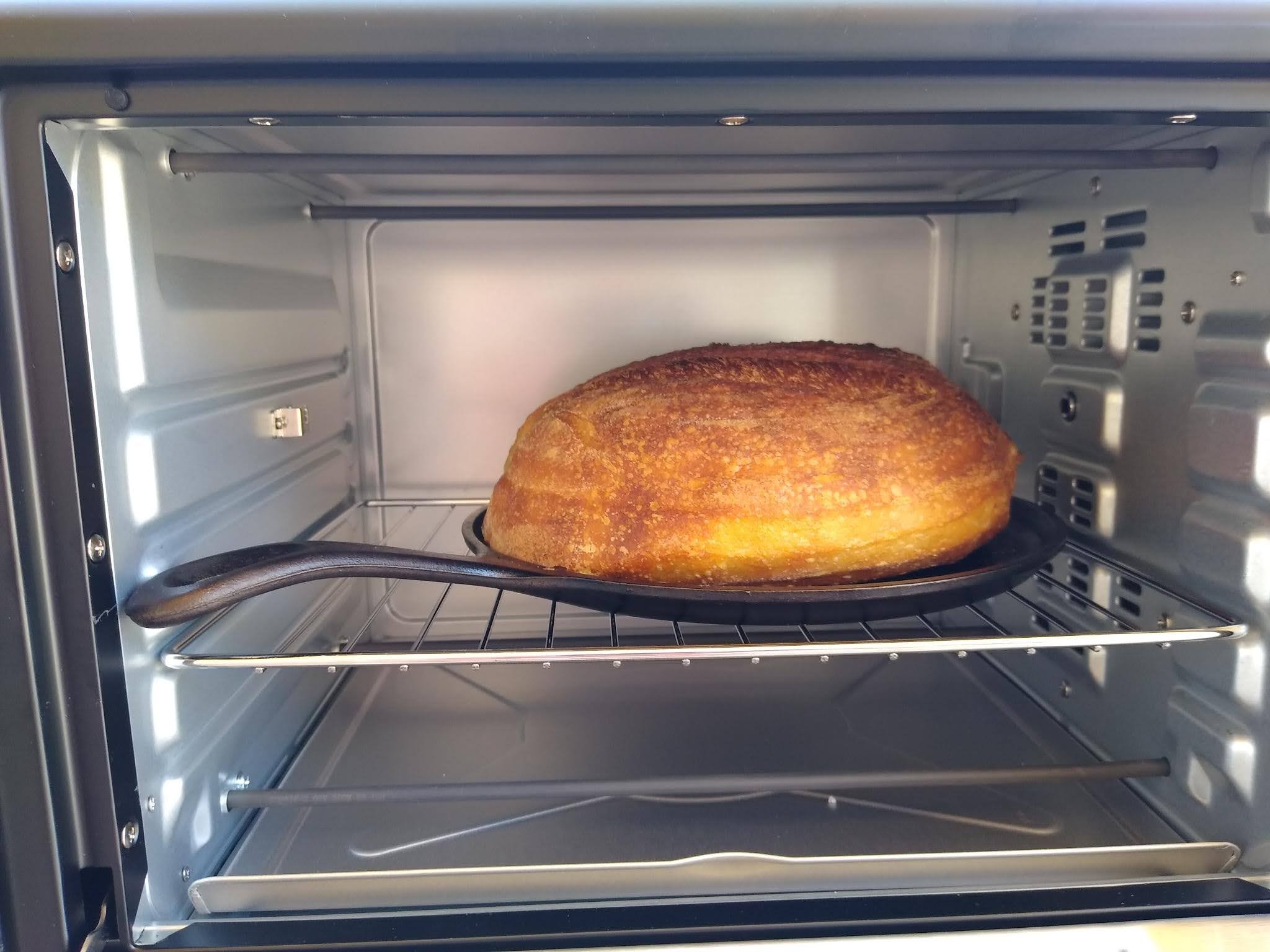 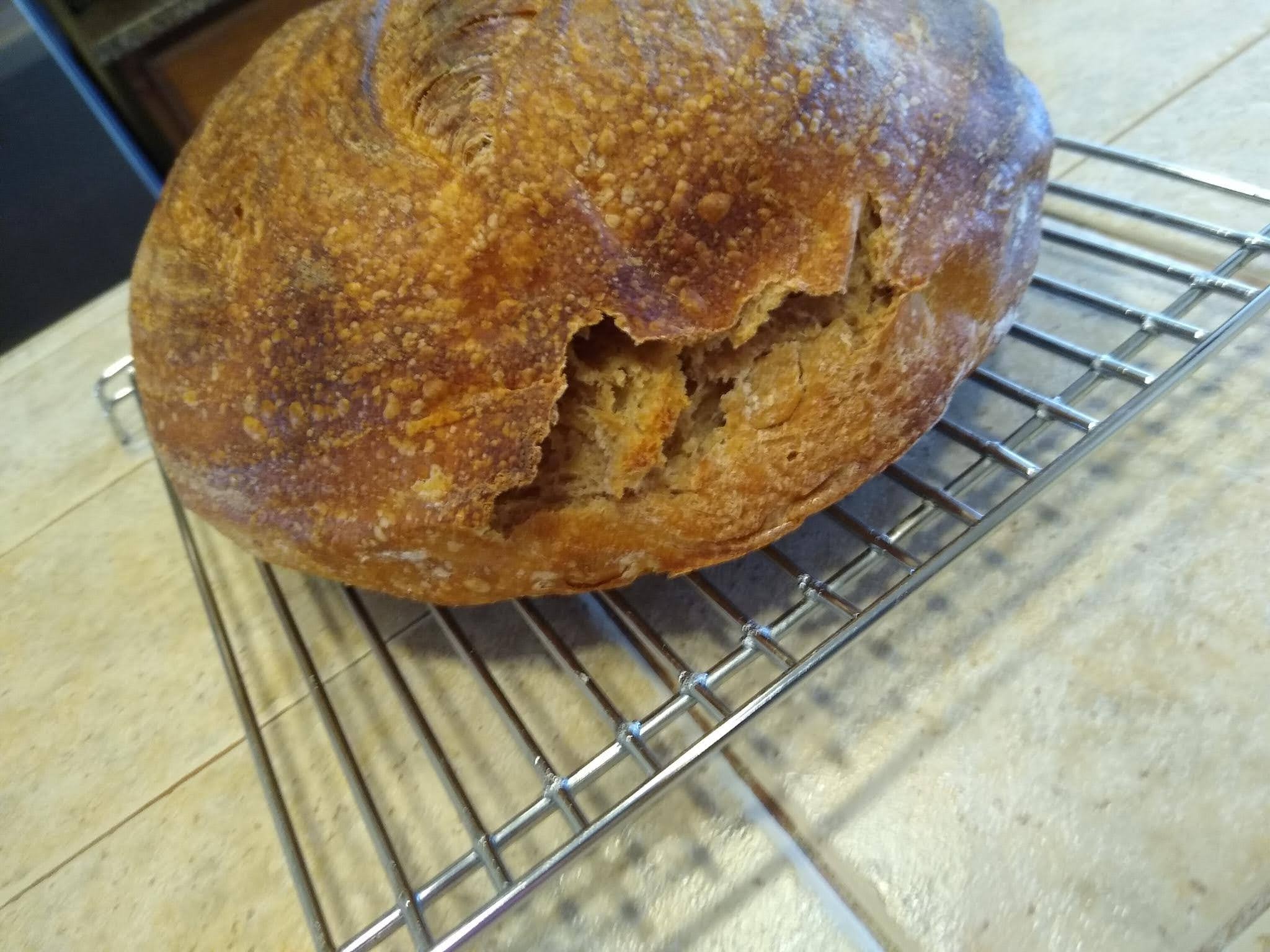 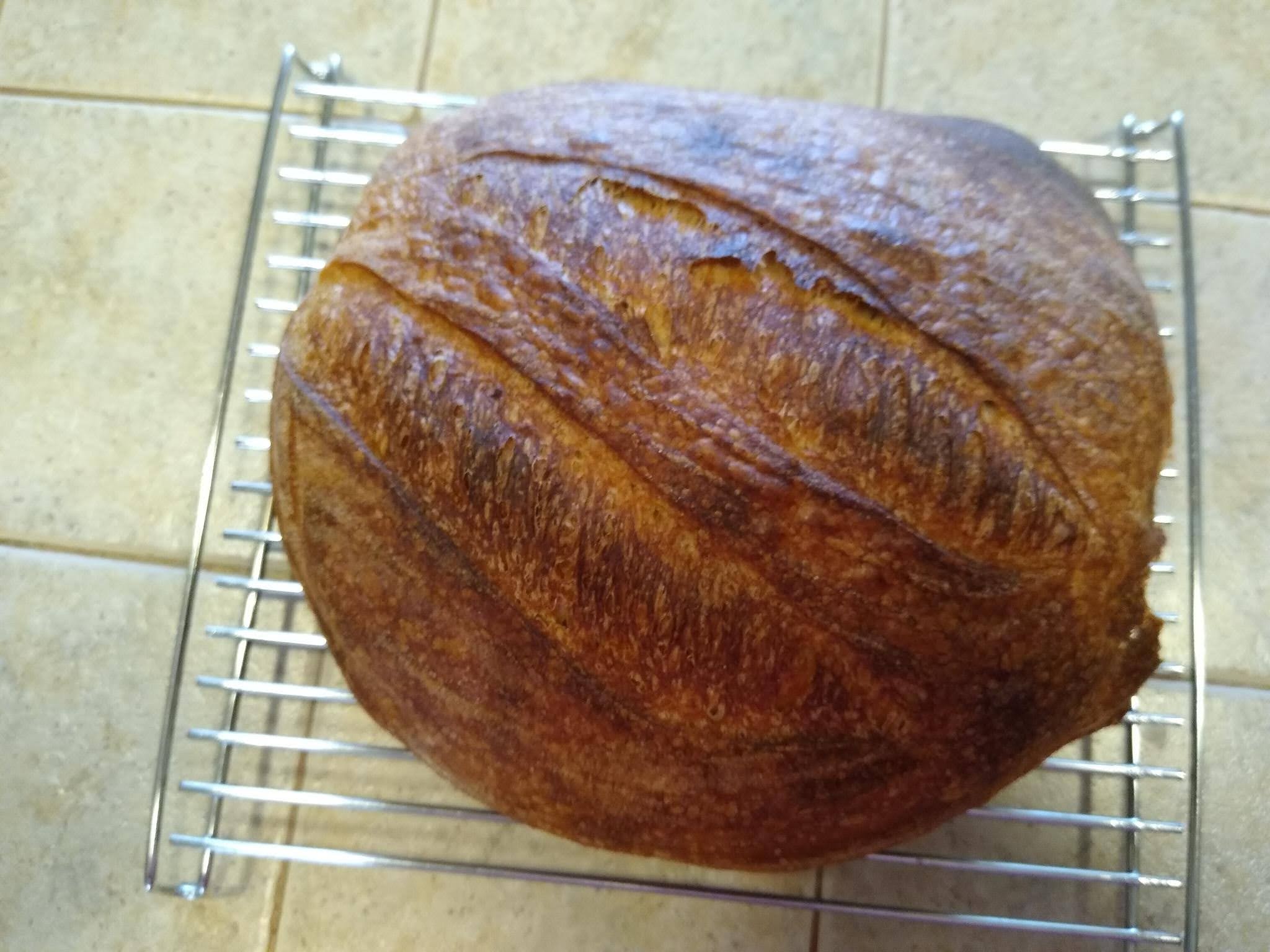 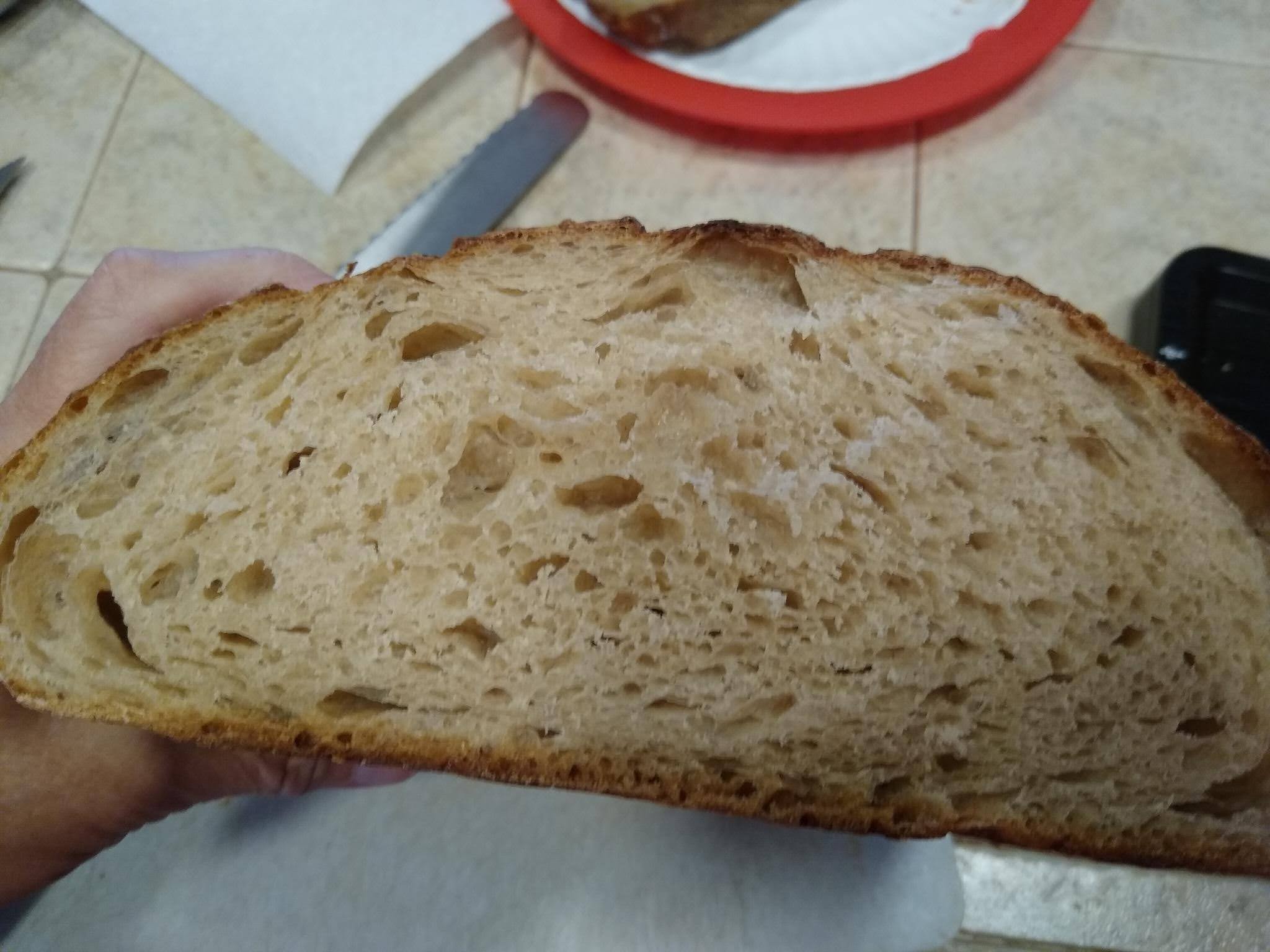 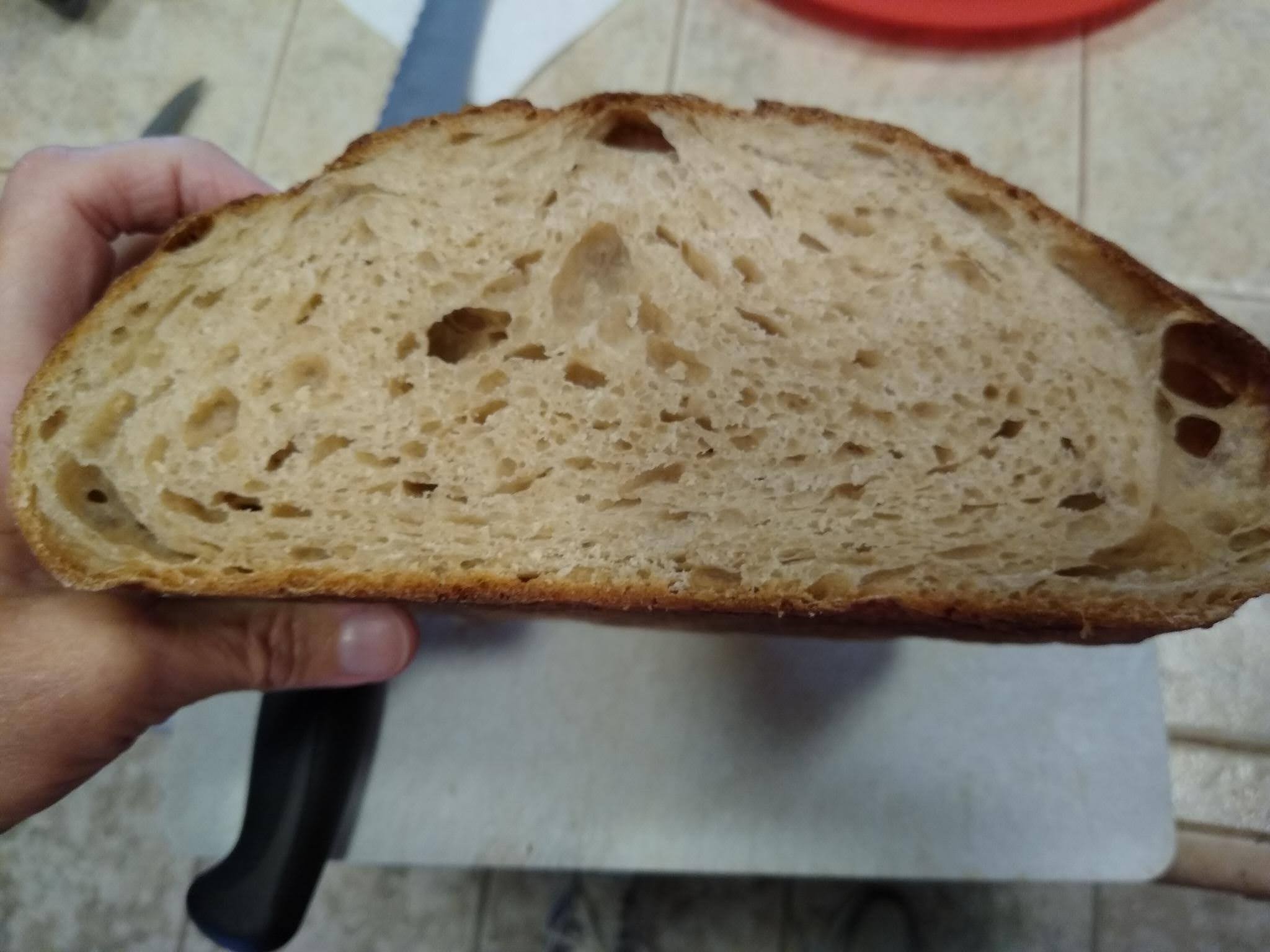 Nice crumb Mary.  That’s great that you were able to bake that loaf in your small oven.

That looks like a nice bake, Mary!  I’d say you have a great outdoor option there.  Good flavor on the loaf?

Next bake do a boule with seam side up.  That scar will just add to the character of the loaf. 🤣

Yup, a nice mild tang and flavor, and tender chew, quite yummy.

Hubby isn't as fond of bread that makes sandwich eating messy or difficult, so I don't bake open crumb breads very often. But that's a great idea! I haven't baked seam side up yet, will post when I do.