In Apollonia's book, her formula for the miche comes out (baker's %) to 41% percent levain, and she includes 4 grams of active yeast on top of it. That, and she writes out a 2-day schedule for the levain from start to ready to use (she includes yogurt, but then, I've just never seen its use anywhere. Is this common?).

She calls for what looks to me a traditional kneading, a 45 minute bulk, no bench rest, and a 2 hour proof. This isn't a judgement on Apollonia or on the Poilane bakery. I revere them as truly important holders of an important lineage. I just have to believe the book in no way comes close to the way in which they bake their eponymous loaves.

Anyone else stumped by this?

The "controversy" was widely discussed in Amazon's online reviews. Some readers felt betrayed/hoodwinked, others defended the author.

Technically, the author did not divulge the actual secrets/formulas of the famous miche.  And, technicallly, it would not help anyway, since several ingredients are available only in France, and the main flour is custom grown and custom milled just for Poilane.

The yogurt brings in the lactobacillus, in order to approximate sourdough starter, along with the commercial yeast. The book specifically says the yogurt has to have "live and active" cultures.

The pre-dough is more of a sponge than a levain, and thereby 41% is reasonable.

If you do a TFL search, you can find at least one successful bake. I link to that TFL bake on the first of my "Free and discounted Kindle ebook" pages where I listed the Poilane book when it was discounted.

I don't see a "controversy" and don't think anything bad about Apollonia or what she wrote, with the possible exception that in trying to make her flagship "accessible," she in fact merely offered another bread.  It's not sourdough and I fear some newer bakers might be a bit derailed.  I'm sure it's delicious.

If it's a sponge, then we're saying initial 2 days is pre-ferment - with no real formation of a levain chef, merely cultured yeast and yogurt for leavening and lactic acid.  Obviously with such a makeup, and a really fast ferment, we're missing out on the o-acids and esters that are a part of the longer fermentation.

I have a lot of experience with yogurt-range cultures,  I am a French alpine cheesemaker, and actually begin the year's making (when I was, anyway), with a "mother" that includes yogurt.  It would be interesting to try the yogurt method here.  It depends on what kind of yogurt one would want to make, but most common yogurts are heavy with thermophilic LABs, S. thermophilis and/or L.. del. subsp. bulgaricus being the most common.  There's not a perfect fit (you may know this stuff - in case others don't, and it's useful), but these thermophilics are well outside the range of levain culture (the thermophilics are optimal from about 115-125F, in my experience).  I think.  I may be completely wrong.

In addition, sourdough depends on a plethora of wild yeasts for leavening.  Yogurt doesn't balloon up as it doesn't possess these species of yeast.

So in 2 days to bake day, from raw flour and water and yogurt and yeast, whatever we're calling it - it's not levain.

I don't have a problem with it being what it is but as to not being able to get the ingredients while true, isn't it fairly easy to parse?  Poilane acquires/makes their own flour blend, but so many books and so much material is out there that makes this decent approximating really simple. Actually it comes to mind Daniel Leader does exactly this in Local Breads, iirc.  His Poilane - not only does he discuss French flour and T85 (I've seen parsings set at a kind of T65 level, but that seems too "white" to me anyway) with a blend of white and WW (like Hamelman et al), but he specifically says something to the effect don't "rob yourself of the experience of levains and sourdoughs" by using cultured yeast, something like that.  Seems to me Hamelman also covers this very well.

Anyway, not my intent to trash Apollonia, etc.  Like I said, I revere these guys, as I revere all artisans working from culinary traditions,  Just an observation and if I brought up something covered extensively, I apologize.  No issue if mods want to simply delete the thread.

Interesting thread, and I don't have anything to say re Poilane bread, but thought you might be curious about using thermophilic starters for bread baking: check out Rus Brot videos, such as https://www.youtube.com/watch?v=x7dgQgYLuUs or https://www.youtube.com/watch?v=wo7_nP6OhwA (don't forget to switch on the English subtitles). Our own Yippee shared her experience with this very complicated bread here: https://www.thefreshloaf.com/node/59662/20190302-most-delicious-rye-bread-ever-rus-brots-latvian-salin%C4%81t%C4%81-rudzu-rupjmaize

With your cheese-making experience, maybe you have the equipment (and will?) to maintain the appropriate temperature to create one, and supposedly that creates the most amazing flavour - unfortunately, I can't testify to that due to lack of a yogurt maker or something else to keep that temperature...

Awesome, thanks Ilya.  Since coming back to active I have bookmarked about a million pages, lol.  I'll try to put hers up front, sounds really interesting.

I used to make the cheese (even made the rennet from calf vells), but about a decade ago I started developing a central nervous system condition that unfortunately affects my entire body, so the planned small, artisanal and really traditional creamery didn't come to fruition.  All good.  Just a couple photos, maybe... 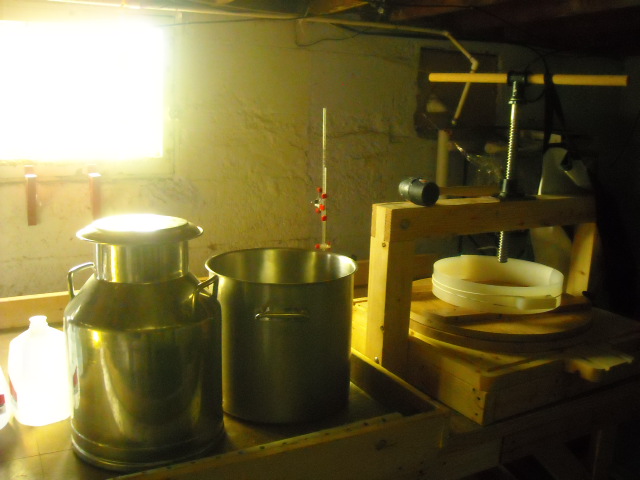 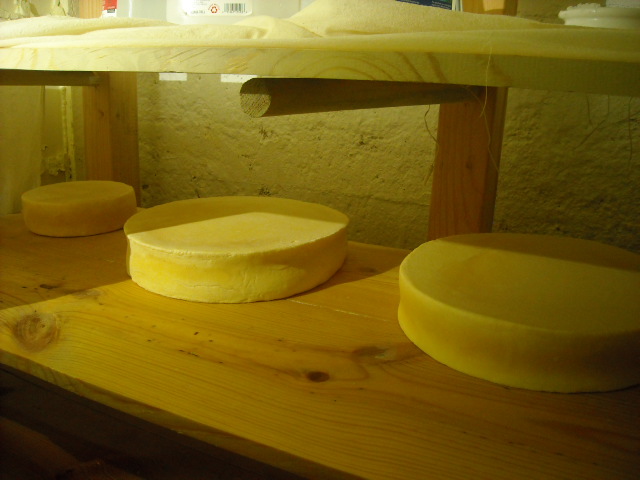 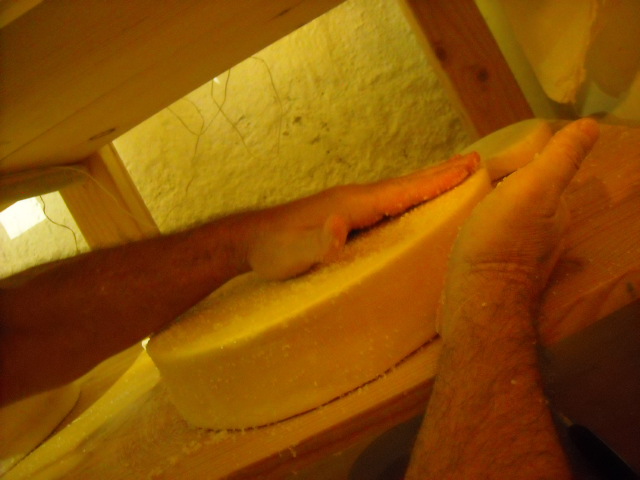 Sorry about your condition! Do you still make cheese just for yourself?

Have a look at those videos, and even if you can't be bothered to go through the whole process (it must be one of the most complicated breads ever! - although he has other recipes with a thermophilic starter which are easier), it just expands the horizon of what's possible in bread making (or at least it did for me).

Oh thanks, Ilya.  With other stuff, it appears it's likely precursor to PD over the next several years, but if it comes, it comes.  It manifests now as a total body, constant burning, and other weird stuff like spontaneous tremors, etc.  Just is, I accept nature as she gives it.  But thanks so much for your kindness.

Haven't made cheese in a few years, now, though I am very close to local farmers doing it right - on small paddocks, rotationally grazed only - and have ready their delicious, raw, white gold.

It took me out of cheffing and it's been a long arc to accepting its demands.  Old cheese molds and other equipment brought from downstairs. Hey, it's a start, lol!

Sounds tough! Must be very difficult going through this and have your dreams taken away from you by random chance. Good if you've made your peace with it.

Sounds like delicious cheese you are getting from your neighbours, just need some great bread to pair it with!

Ugh.  I mentioned some memory issues and to my embarrassment I see that one of those threads Dave mentions is...

...pretty much this thread, both started by me.

Apologies to all.  Mods I fully understand if you want to just delete the thread, and sorry for any inconvenience.

Addition of 0.2% yeast to sourdough is very common in French baking, and commercial baking generally speaking, it is called levain-levure or levain de pâte method, see it described in Calvel. It is indeed 45 min bulk and 2 hrs proof (see Calvel, English edition, p93 and p.101 comment #4.) because all the necessary sourdough aroma and acid load are in the sourdough sponge, in mature sourdough levain that has zero commercial yeast in it.

It always existed and it is legally justified to be sold as pain au levain in France, ever since commercial yeast was introduced and even before that, when baker's yeast was perpetuated at home, in liquid form, collected from the surface of fermented beer, etc.. By law French bakers can add up to 0.2% of fresh yeast to their sourdough loaves and sell them as 'sourdough'. In rye sourdough baking fresh yeast is usually added up to 0.5% level.

Yeast is added in tiny amounts to normalize the speed of proofing and oven spring of sourdough loaves, which is important in bread production, especially when it is large scale, bread is exported countrywide and worldwide and uniformity of looks and of quality of crumb is important.

I obviously don't know what they do in their bakery, I don't work there. I just know that it is very difficult to recreate bread from large scale production at home. To convert it to small scale baking at home. The mass factor is no joke. Massive amounts of dough and sourdough behave differently, different ovens give different breads, etc.

I would trust her. She probably experimented at home and recreated what is the closest to her bakery miche at home and suggested we do the same by following her formula for home baked bread.

She doesn't describe exactly how Poilane bread is made in her bakery for two reasons. Her bakery is her bakery, there is no reason for another bakery to bake her bread under different name. It's their know-how, trademark-protected. And bread from her bakery as is is not reproducible small scale, at home. A different approach and a slightly different formula must be used to create a very similar if not identical bread at home.

Thanks mariana, that's completely reasonable.  I betray my inexperience in thinking no leaven could be brought to "ready" in two days.  Making the "mother" I spoke of above takes about 20 generations at the right environmental ecology to get a working starter ready for the alpine cheeses (I make Abondance, reblochon, tommes).  The culture is simply a wildly erratic stew that performs with all kinds of faults until the ecology settles out, and it takes about this long in my experience.

Actually thinking on it I recall something about a levain made with potatoes from Paul Bertolli's book on the food of Chez Panisse.  It was my introduction to levain and unless I'm mistaken it, too, is just a couple days.  I think my reading since then (pretty long time ago.  I have a CNS condition and my memory is sketchy) must have drilled into me the long requirement to get a starter ready for bakes.  My mistake.

I do know of the modest yeast use and remember from Calvel he includes it  From the book (p 92) it seems he's not a fan ("...baker's yeast while breadmaking with a levain.  This is done quite often, but when the baker is making and selling bread that is supposed to be from a natural levain, the addition of yeast is contrary to established custom.")  I know he also acknowledges that production needs might make cultured yeast helpful, and at such small levels it won't affect the final bread much, if at all, as you cover nicely, thank you  A philosophical thing for him, maybe?

I am afraid this thread might be understood as a rant about Apollonia or Poilane, absolutely not my intent.  Just had some questions on reading the formula.

Thanks again to both of you for your insights.