Don't trust me if I tell you the statement

because I'm just a novice rye baker; but if Rus says so, it's probably true!

This is the most demanding formula I've ever tackled.

I messed up every stage at least once.  Even the loaves you see below have defects - I forgot to shape them in the typical "submarine" form because I'm so used to shaping the "torpedo" Borodinsky.   And one loaf got that unwanted "scoring."  Otherwise, I would have considered myself done with this bread and move on, but I guess not yet.  I am out of berries so I can only make it again when my 25-lbs order arrives.

Because of making this bread,  I've started grinding rye berries to get the required whole-grain flour. I'm not crazy about the extra work it adds to my busy schedule, but I'm glad I'm no longer an "outsider" when you guys talk about milling.

This bread requires a thermophilic starter, which is quite tricky to make due to the specific high-temperature requirement. I bought a BT especially for making this finicky starter. But to my disappointment, I had to work around it to reach the ambient target temperature. Can you imagine my frustration?!

So with all that "hardship," what do I get eventually? The thermophilic starter/sourdough re-balances the maltiness in the scald. The resulting loaf is a refreshingly fruity, moist, and springy 90% whole-grain rye bread.  My favorite way of eating it is not with butter, not with cold cuts, not with cheese, not with sardine and whatnots, but by itself. I don't even toast it because toasting ruins the moist crumb. I merely nuke a frozen slice for 15-20 seconds on power 1, and I get a warm and aromatic, slightly sweet springy slice of rye bread with a thin, somewhat chewy crust.  So rewarding and satisfying after all the hard work!

Give it a try if you're ready for a challenge!  Thanks to Rus for another delicious rye bread!

Off it goes to 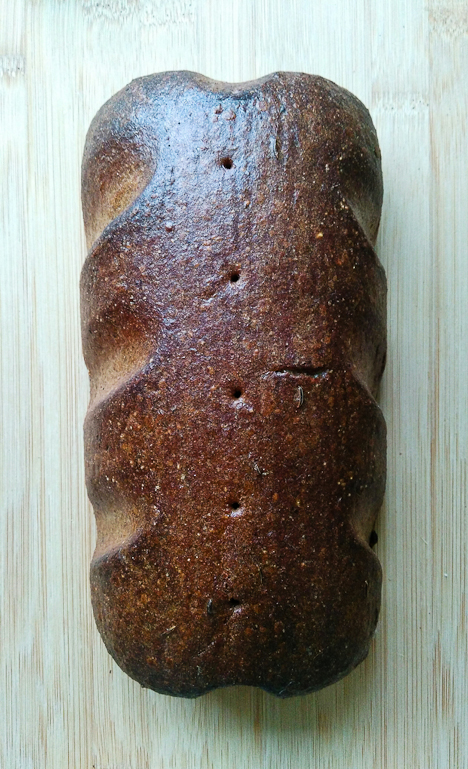 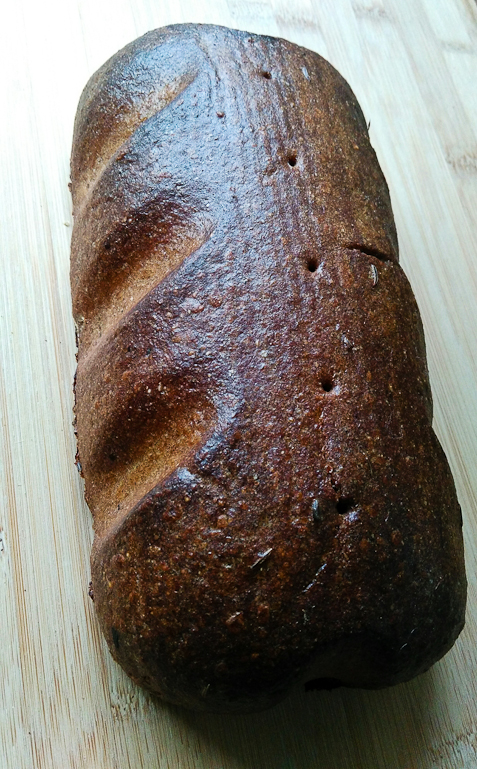 Misshaped, so I have to re-bake 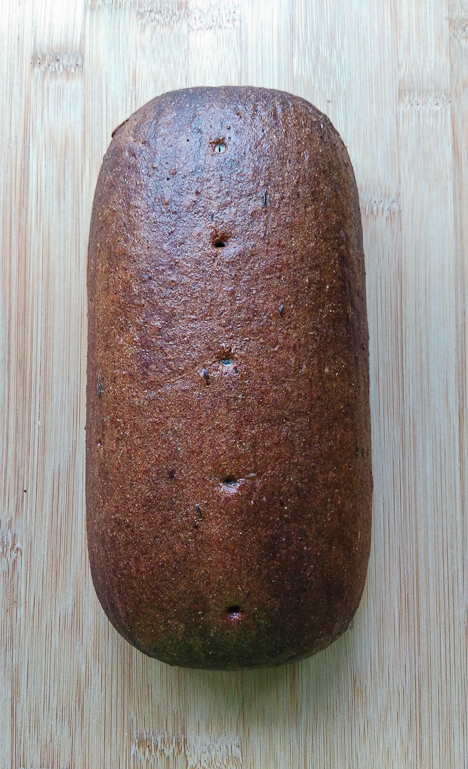 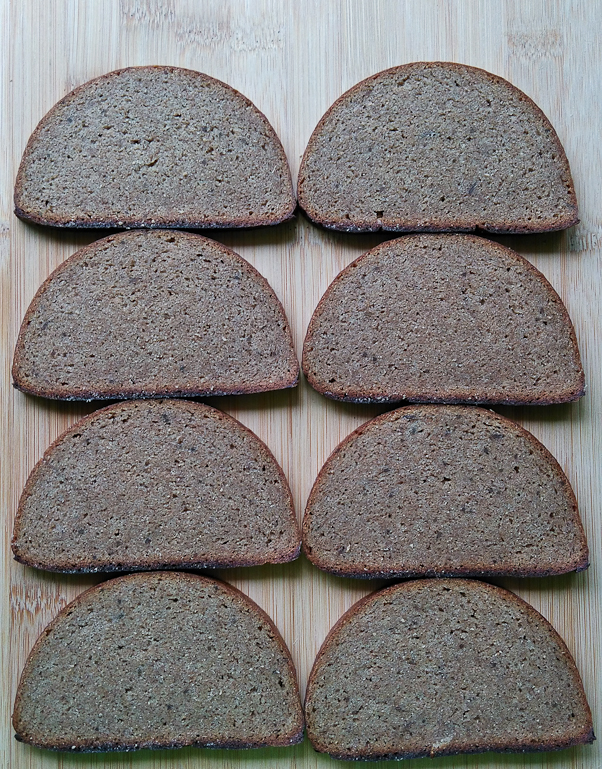 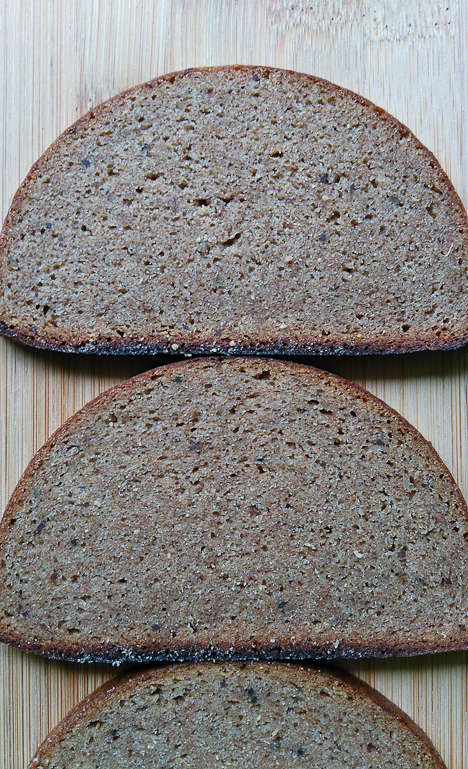 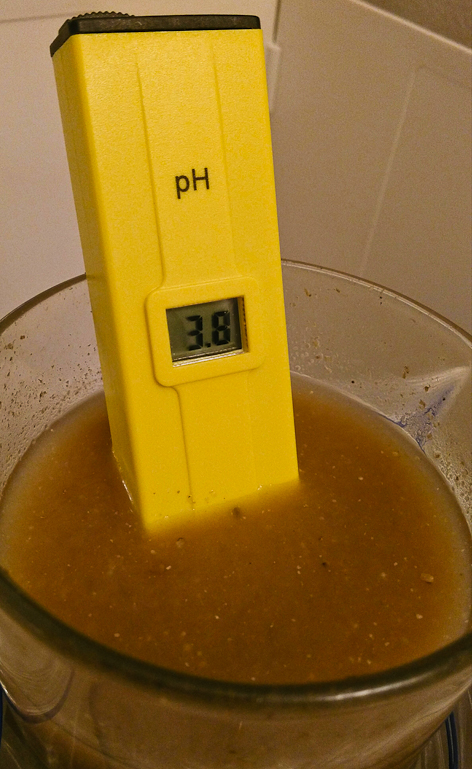 Then you make the thermophilic sourdough 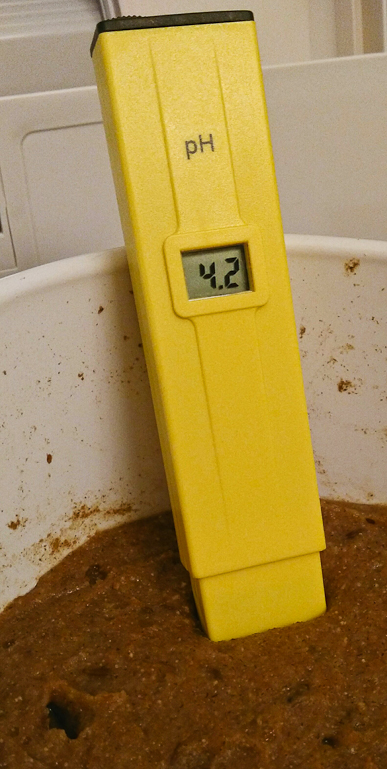 The "scoring" was not supposed to be there. 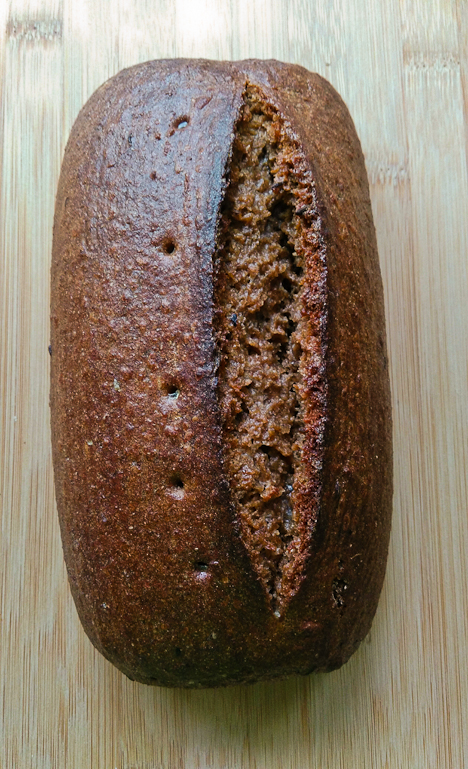 The one with the scoring must be a lifeboat. ?

Very impressive bake.   The moist crumb looks perfect and the coloring as well.  I'm impressed you have a Ph  reader.  I don't know if I have the patience to use one ?.   I wish I had the time to try this formula but it's been a struggle to bake anything with my new job.   I have not forgot about you though!  Please PM me with the loaf you desire and I'm going to get it to you soon....I promise!   I figured out where I can mail it from in the city so now I'm ready ?.

No need to try the formula, try the ???! If everything runs smoothly, ??? I'd say by Wednesday. We love your cheese bread. It'd be great to try any one of them again.  I hope you'll enjoy mine, too. It's just too good too keep it to myself!

That's so nice of you.  Let me know which cheese bread you prefer so I can try to bake it soon.  I have a bread I'm baking tonight but it's no cheese bread so not fit to send to you!  ?

with the small crack on top and the dimples in the side showed up yesterday in the mail.  I was so excited it was all i could do not to tear into it because it smelled so good.  But this bread, I have learned, is better after sitting 2 days and that is exactly how long it had been since baking when I ate a piece for breakfast, Plain Jane, no toasting, no butter, no nuttin' .  It was delightful.  I ate the heel first.  The best rye bread ever!  Better than the last rye bread that came by mail and that one was fantastic.  This one is in a league of its own though.  Since I am limited to 1 slice of bread at a time I quickly sliced 2 more thin ones and popped them in the toaster and readied the schmear of cream cheese.  I love whole rye bread and even though this one is 90% I count it as 100% because it tastes so darn good.  Yippee oi one of the best bakers around and she really has taught herself how to make the finest rye bread on the planet.  What a treat to call her my friend. 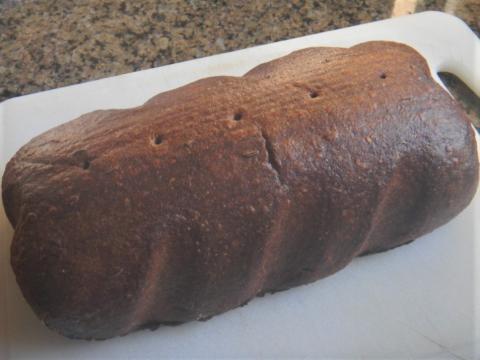 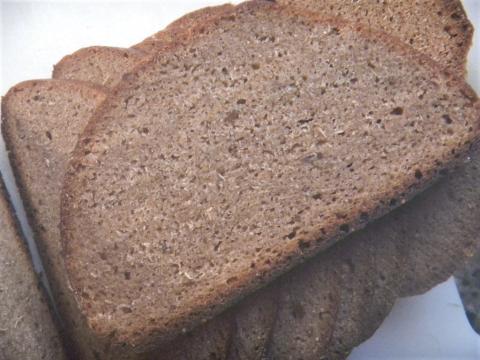 Sliced thin - sure to win! 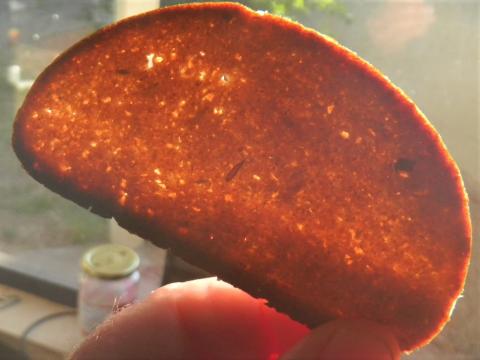 Could not have done it without his guidance.

Thanks again to Abe/Lechem, who had introduced Rus to me.

I agree with DA!  This is one tasty bread.  Hats off to Rus for inspiring you to try this.  It goes great with a schmear of cream cheese and/or any cheese or butter......

I'm mixing your bread now. Hopefully I will bake it tomorrow and get it in the mail on Monday if all goes right.

Glad you enjoy the bread! Sharing deliciousness is a wonderful experience!

? forward to your bread, thank you!

I just saw Rus Brot's Youtube-video about how to make this spectatucular bread:

I'm impressed someone here on TFL managed to do it. It seems darn difficult and time consuming. Great job Yippee!

I was looking for ideas to have another go at 100% rye, but this looks well above my level.

Rus's formulae are not only delicious but also precise.  If you follow his instructions carefully, it's hard to mess up! Besides, Rus is very helpful in answering questions about the procedures.  If you want to start with a more straightforward 100% rye formula, I'd recommend either this basic formula or a super flavorful one.

My take on these two formulae is here and here, respectively.

Good suggestions Yippee. And thank you for the encouragement.

I checked them out. They look both interesting and good. But they still seem too advanced for me. I guess I could try make them but I have now anyway my mind set on a Danish Rye Bread that might not be super easy but it is also a type of bread I have experience of (eating :-)). (I will get into it when I get my rye starter up and running which I, during a wheat period, managed to neglect almost to the point of flat-lining.)

I raised some questions about malt connected to the Danish Rye here if you have the time and energy:  http://www.thefreshloaf.com/node/64945/making-nondiastatic-rye-malt-beer-rye-malt

Hi Yippee, did you ever make Rus's Monastery Bread? I just saw the recipe on Youtube. The starter looks like an interesting combo of sourdough and raisin yeast water.

and I don't think I will, Lance.  Because it takes too long! After working with CLAS, I have no patience to wait anymore! But some CLAS bread still requires several stages, then I have no choice. I am going to make a 100% WW CLAS bread which is quite complicated (but not taking as much time as the Monastery Bread), so I have to psych myself up for that. :-) The one I am going to make is not sour, but if you are looking for a sour 100% WW, Rus recommends this one.