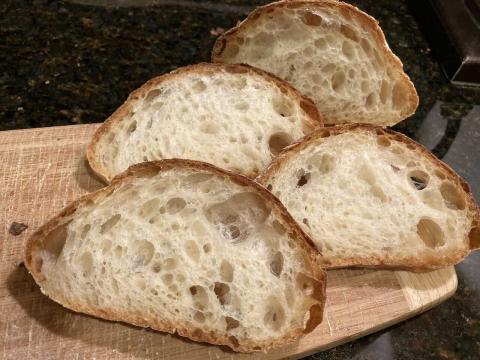 "Ciabatta are like geodes, their true beauty is hidden until you slice them.".  Don, our superb baker MTloaf, provided this wise comment recently.

Lately I've been on a ciabatta reign of baking terror, starting last month with the Kingdom Bakery version a pair of times.  Then returned to my levain version of Scott MeGee's ciabatta.  Most recently moved back to my biga version of same.  With 40% PFF at 66% hydration, I've had good results with these.

However, tinker I must and decided to double the PFF to 80% for the biga while maintaining the same 66% hydration.  Only once before had I used such a high percentage of PFF - a few years ago with Abel Sierra's 90% PFF very very stiff biga (think Piergiorgio Giorilli's ciabatta), but that was for his boule formula.  The major differences in those two bigas vs. this 66% hydration biga are the simpler initial biga mixing, shorter maturation time and ultimately a much much easier handling preferment and incorporation into the final dough.  This biga triples in about 12 hours, so the growth is easy to judge.

And I have to say that the dough felt better at every step of the way.  The first change noticed was a big one - during the mixing phase.

Once all are incorporated I mix on high speed until I get a strong gluten development that slaps the sides of my 35 year old Kitchen Aid J-hook mixer's bowl.  This action may take somewhere about 15-17 minutes total with both the levain and biga versions, total time including the multiple stops to clear the sides of the bowl and the hook. With this 80% PFF mix, the entire phase including starts and stops, took just under 7 minutes.  Almost immediately I could see the gluten develop and when I emptied the mixer the dough strength was quite apparent.

All three folds in the tub indicated a stronger dough, as did the divide and shape.  The resultant bake showed a greater loft, few large holes, and a more delicate lighter sweeter crumb.  My taste-testing neighbor, an Italy born and raised gal, declared this version my best yet.  I might find it hard to disagree. 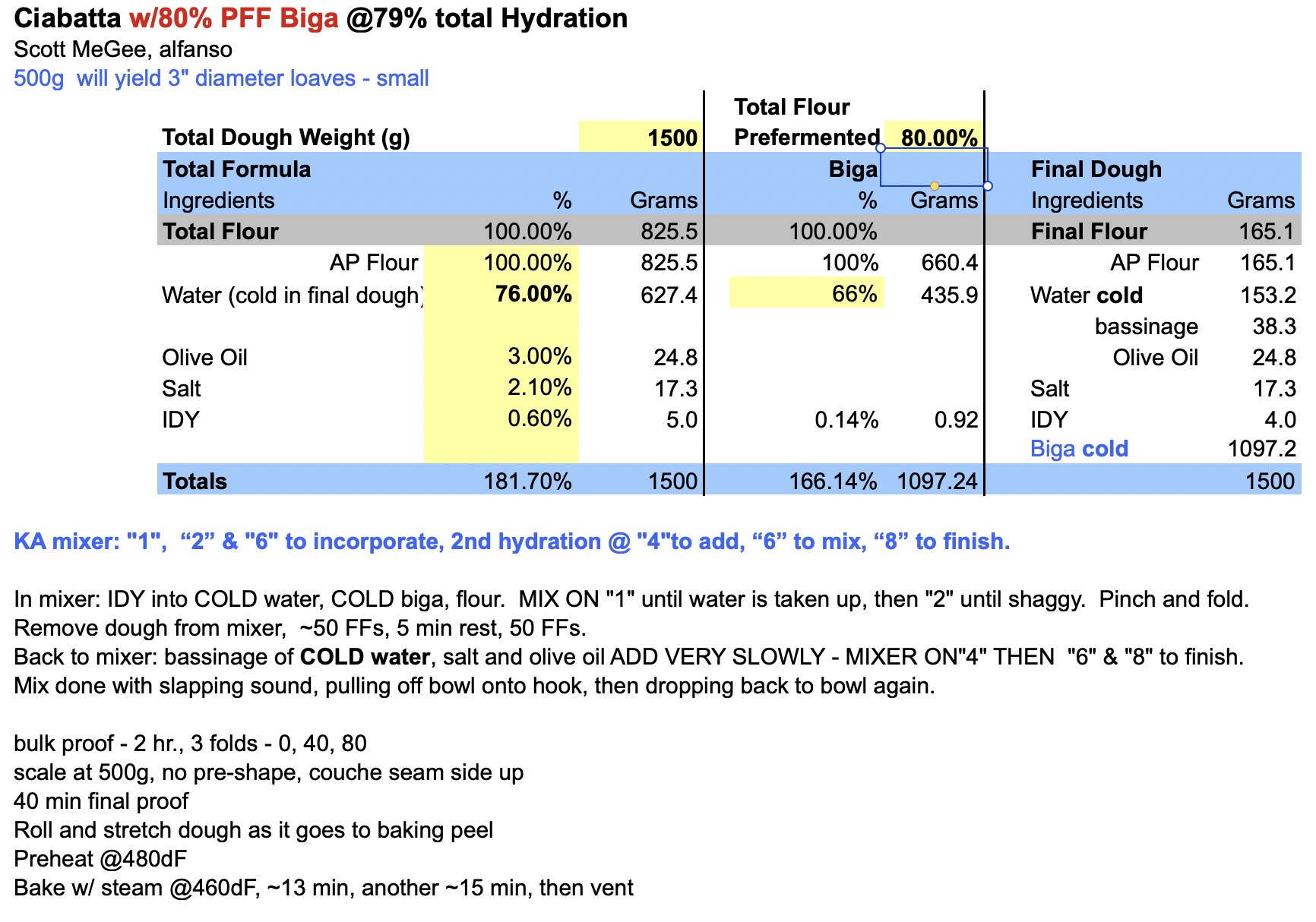 *With this 80% PFF version, the biga does not have to be chilled as the mixing friction is reduced greatly by the faster gluten development. 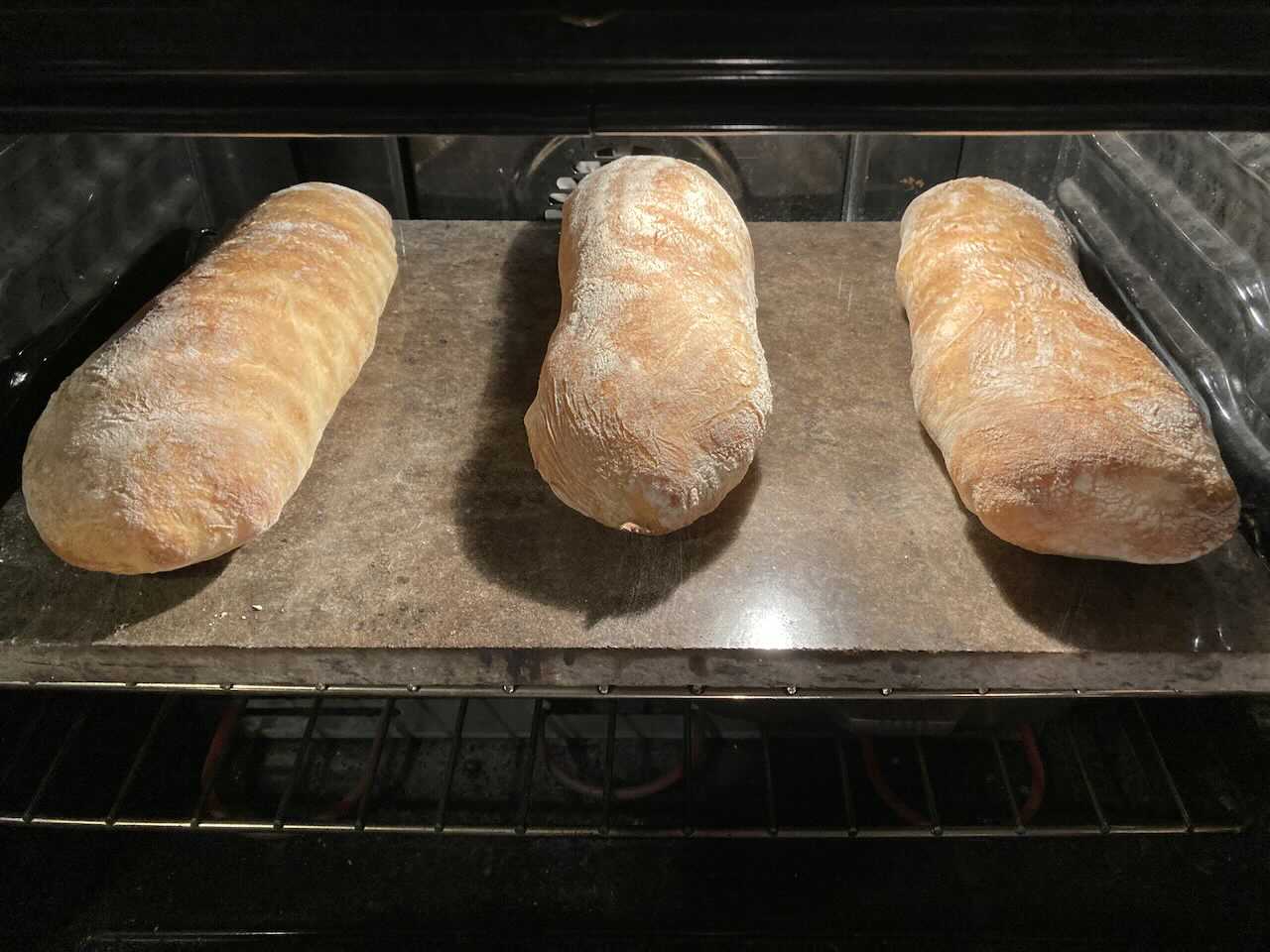 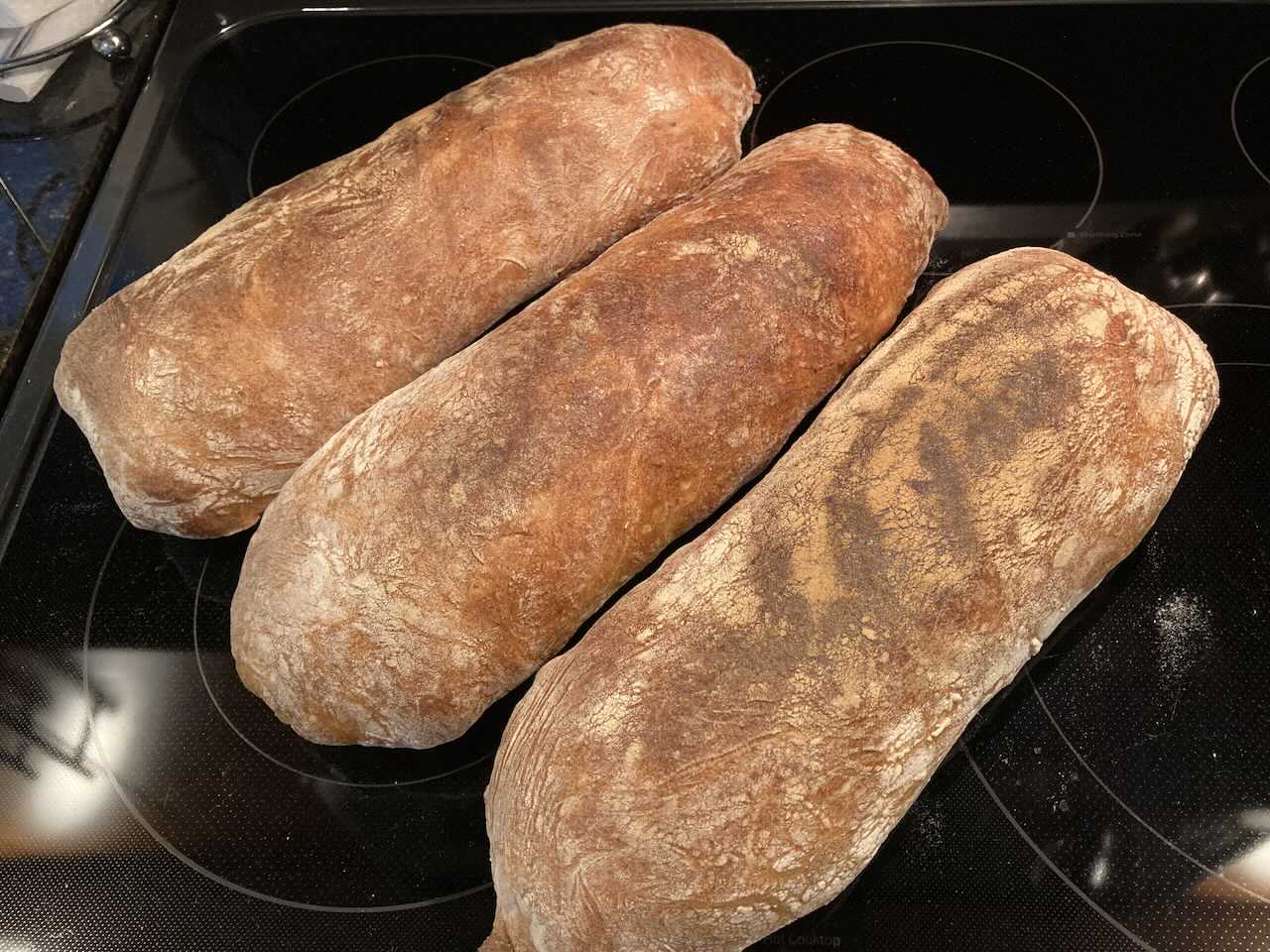 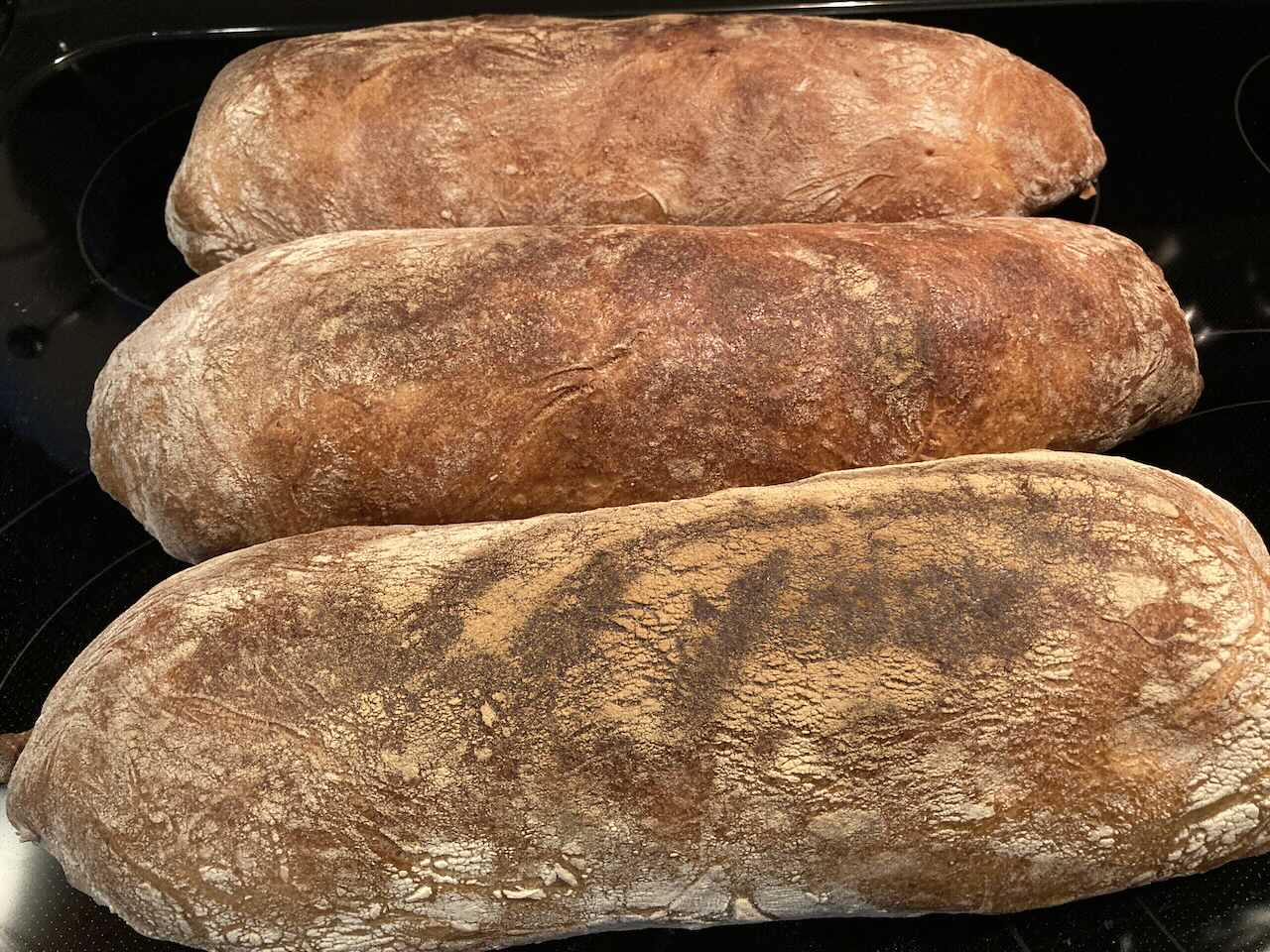 The lighting on this last picture is off, as the true color is more accurate on the previous pictures. 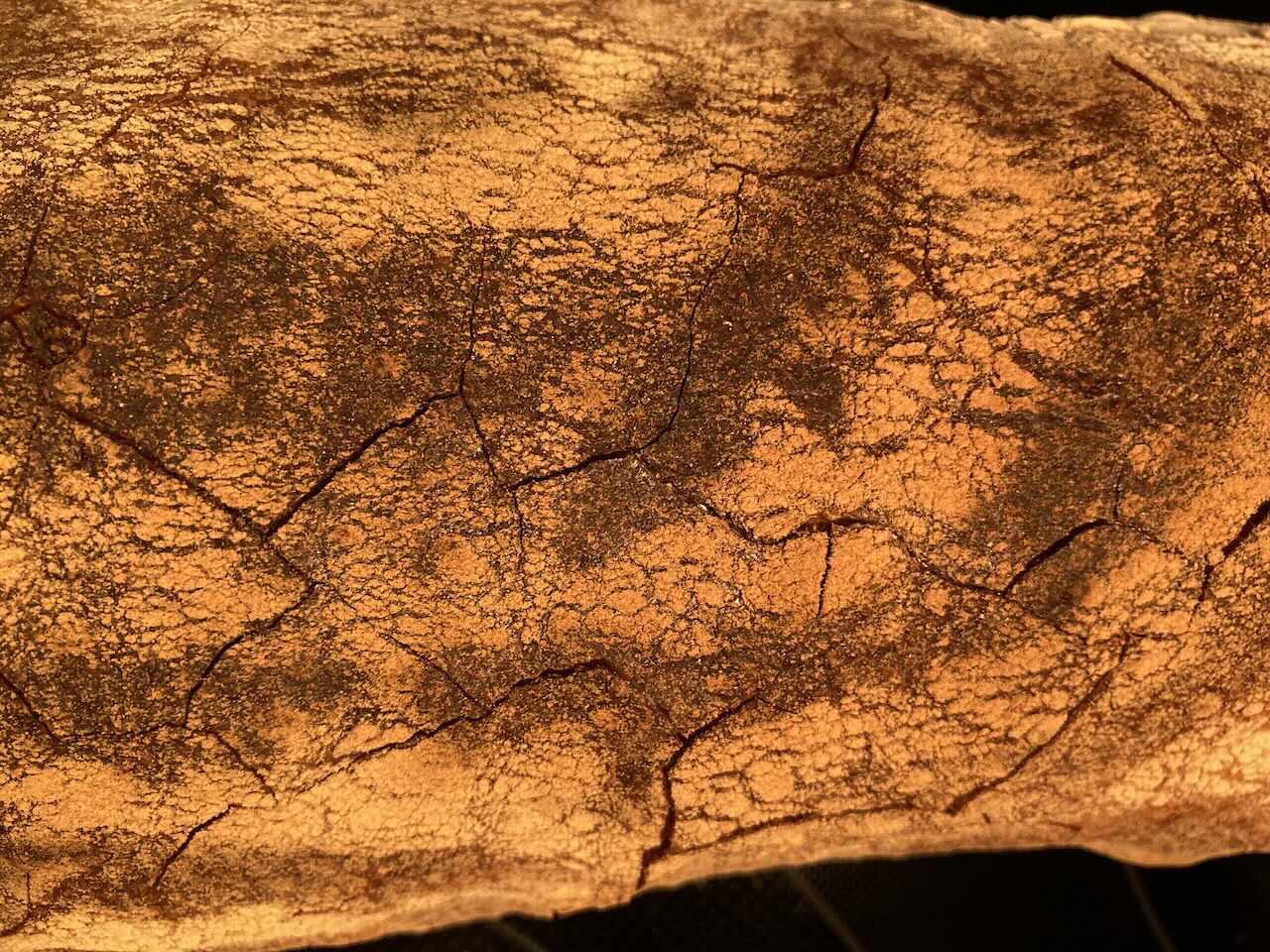 That crumb is just perfection for ciabatta, the crust looks great as well.  I wish I had an old KA mixer so I could easily try working with these low hydration bigas.  I will get to doing a ciabatta soon though and I’ll do the one you shared with me very recently.

At 66% hydration it is an easy mix with a silicon dough scraper type tool in the vessel, then a few squishes/pinch and folds.  Level it out, put a dot on the container where the biga comes to, go to sleep.  When you wake up you'll see some significant growth.  After ~12 hours and the biga has stopped growing it should be about tripled.

Scale out the cold water into the mixer's bowl, dump it into the tub to loosen the biga, dump it all back into the mixing bowl, and the mixer will have no problem.  I stop the mixer to facilitate ensuring a complete incorporation.  For this dough I don't autolyse.  Just French Folds on the counter, then back into the mixing bowl with the cold bassinage water.  pinch and fold that for two minutes to have the dough start to take up the additional water.  Then mix to incorporate.  Add the olive oil, and use the dough scraper to help initial incorporation.  The dough should now feel silky.  Then back to mechanical mixing, intermittently scraping down the bowl and hook the rest of the time.

If I had the luxury of a spiral mixer with a breaker bar, none of the above would be "necessary".  When the dough feels strong, billowy, still silky and slaps vigorously against the sides of the mixing bowl, you'll know you're done.  Your hand will guide that decision.

It makes it a great resource to learn about different breads. If one wanted to learn to bake ciabatta, this post is a great starting point.

By the way, have you ever tried prefermenting all of the flour?

dedicated to ciabatta a few months ago.  The CBs can act as crowd sourcing for a learning melting pot.  In the text above, I mention that I once took a 90% biga into a final mix, but that's as high as I've gone.

I have a small group of bakers whose formulas and methods I follow and you are certainly one of them.  So thank you!  I joined the Zoom conference for Agresys that you had last year, but my language skills are still too poor to follow very much - y con tan velocidad - especialmente un capuchin!

(I contacted Veronica Guerra in November to ask how she and her family were, but she did not respond this time, as she did about a year ago.  Do you know if she is okay?)

Thanks friend, we are in contact. Greetings from México.

These look really nice and I love the crumb. I've never considered PFF at 80% or anywhere near it. Nicely done.

As mentioned above, I'd tried the Abel Sierra (abelbreadgallery) 90% PFF super stiff biga, as much as a lark as that I like what he posts.  Anything approaching 80% was way out of my wheelhouse.  Until now.  I felt that I might get a more mature and well developed overall dough with so much biga.   That was the only parameter that changed.  And apparently it worked.  So this may now be my go-to formula for ciabatta, as I have zero complaints about how the procedure ensued, nor the results.

If you're in the mood/mode, give it a try, and you may find that you like the results as well.

Alan, this looks like another winner.  My two questions are: (a) about how much is one gram of IDY -- perhaps 1/4 tsp? and (b) to what do you attribute the dark tones of the crust -- purely temperature of the oven (there is no malt or other similar component in your dough to add such darkness)?

This certainly looks inviting, and your reply to Benny about the biga was very helpful.  Given that it does not need to be chilled, the biga sits at room temperature overnight (I assume).

I don't add any malted barley to the mix.  The flours, all standard supermarket brands but these days almost exclusively KA AP, all have malt in them.  These baked for 15 minutes with steam, another ~15 minutes, and then ~3 minutes of oven venting.  I generally like a bake on the darker side, so the longer bake contributes a lot to the coloration.

I haven't had the time to contribute to TFL lately but I happened to see these and since I'm being quoted I had to say hello and nice bake. I have been pretty busy with life changing plans like selling the house and moving somewhere else and looking at being retired and doing some traveling.

Am I to understand that the Legend of Donnie Baggs has now resurrected his heritage and become Donnie Slippers?!

of agents set about in cities across the world.  My internal name is Pantofola D'Oro.  Our goal is to promote the purchase of ciabatta.  But we rest silently awaiting the word from our boss, codename "Headbaker", before we strike.  Our units are collectively referred to by G-men as Slipper Sells.

Alan, this morning I made this ciabatta, and it is superb.  After mixing the biga last night in a 4-quart bowl, which seemed way too large (but after all there is 660 g of flour and 436 g of water -- but only a gram of IDY), I woke this morning to find the bowl nearly filled.  After being combined with the initial water and having the air reduced, however, everything fit nicely in the bowl of my KitchenAid mixer.  And what great dough to work with!  I followed your instructions, and by the time I had the mixer going at the 8 level with all the slapping there was no dough stuck to the sides or bottom, and it was silky smooth.  In fact, I never needed to stop and scrape down the dough -- it coalesced nicely on its own.

What a billowy dough too.  The gluten is strong, but think of strong jello.  All wobbly.  At the end of the bulk fermentation, I dumped the contents onto the floured countertop, folded the dough in half, did my best to estimate thirds, and tried to do some shaping.  Your experience with baguettes probably gives you a head start in handling ciabatta dough.  I did a reasonable imitation of the McGee shaping and plopped the three dough blobs onto my couche.  They seemed done after about thirty minutes.  My peel is not wide enough to accommodate three spreading dough masses (next time I will probably opt for two loaves), and they merged slightly in the early stage of the bake.  I let the crust form a bit and then reached in and separated them for the rest of the bake -- no great loss.  Baking time was thirty-two minutes, in part because I had opened the door a couple of times and also to get a good bake.

Nice crust and amazing crumb.  I delivered two of the loaves to a neighbor down the street from us, but kept one.  My wife says it is her favorite ciabatta so far, and I think this will become my go-to for ciabatta.  Wonderful flavor.

Many thanks again for posting this recipe.

Super work, Ted.  I was amazed at how much strength doubling the biga provided.  Silky smooth is the perfect description after the olive oil is incorporated.  I try to put whatever pressure is reasonable on the outside of the couche to help make these loaves behave during the proof.  Once they are loaded onto the oven peel they abide and don't spread out.  But the loft on yours proves that they got a great boost from the oven spring.

The change to the formula reminds me of the Agent Orange (Eddie Murphy) line in Trading Places "once you've had a man with no legs you'll never go back".

So that others can see another example of crumb produced by this recipe, here is a photo of my bake (with the bread next to some gouda cheese). 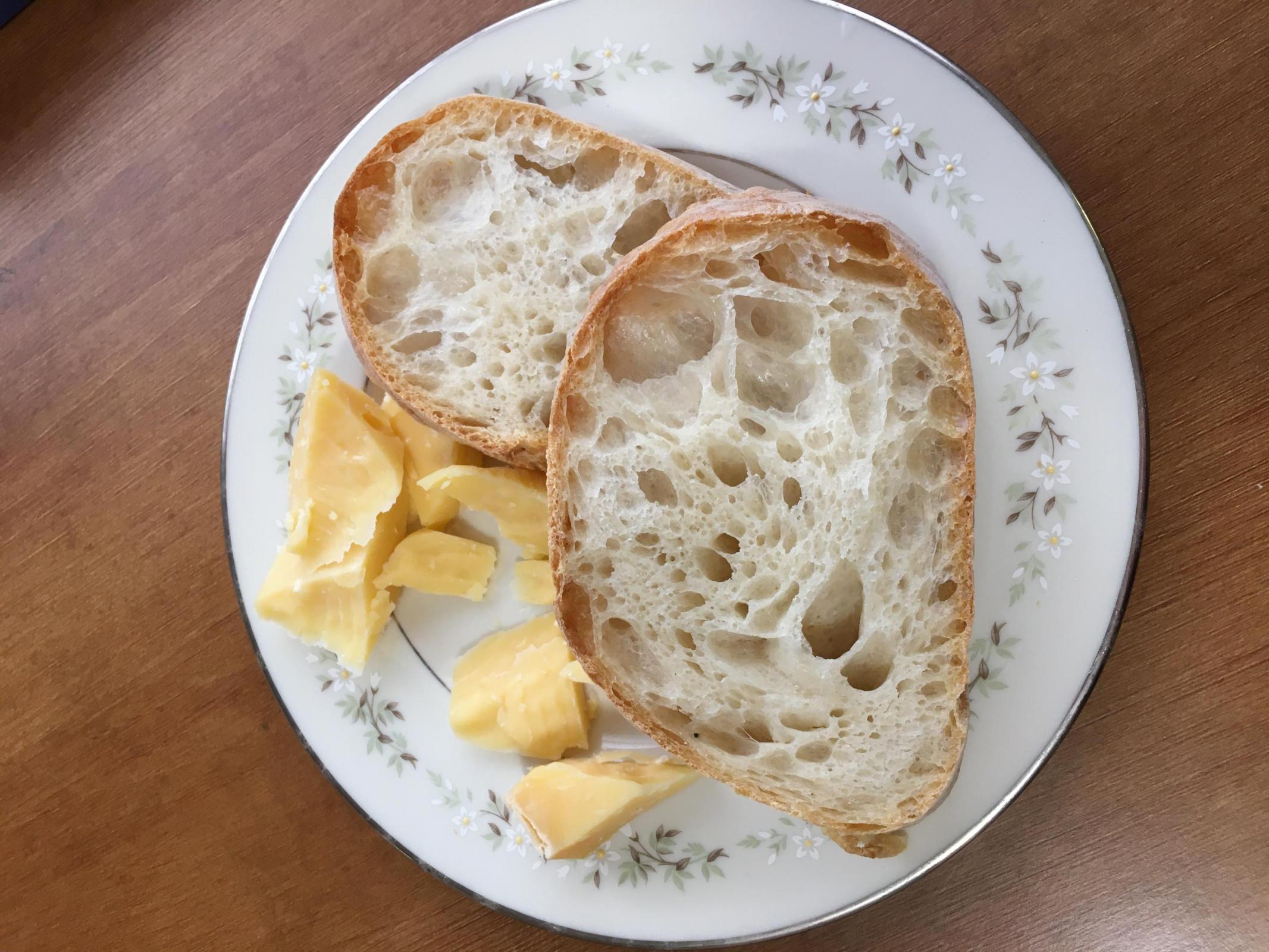 Gavin, thanks for your compliment.  I got great instructions from Alfanso's directions.

Thanks, Benny.  You should give this dough a whirl.  You would be very pleased with the results, and the dough is very nice to work with.

Gorgeous results. I love the look of the crust, the color is beautiful. The crumb looks really light and soft, you got a nice gluten development there.