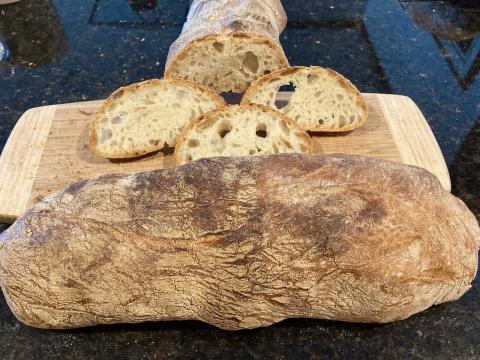 Posted my first experience with the Kingdom Bakery Ciabatta the other day, and was pleased with the results, but tinker I must.

Changes this time employed a trifecta of pro baker's techniques, starting with the Kingdom mixing and BF, followed by the Ciril Hitz method of divide, and then the Scott MeGee method of shaping.

The final three folds were performed on a watered bench-top with no flour. And I ensured that after each fold I returned the dough to the vessel seam side down.

The dough was incredibly active at the three hour BF mark, yielding a very jiggly and unstable mass for divide and shaping, more so than with the Scott MeGee formula.  This made the dough difficult to shape in the Scott MeGee style, something that I've grown to greatly prefer.  The loaves were well floured (read as too much flour for my tastes) and therefore no issue to remove from the couche, basically merely rolling the loaf over on the couche and handling it from the ends.  The first was the shortest and most difficult to shape.

These baked several minutes less time than the last batch, and the lighter coloration and denser, heavier loaf testifies to this.  Still quite tasty.

After the last bake I was asked whether my BF had tripled.  Here is the today BF with the black dot indicating where it began. 3 hrs @78dF. 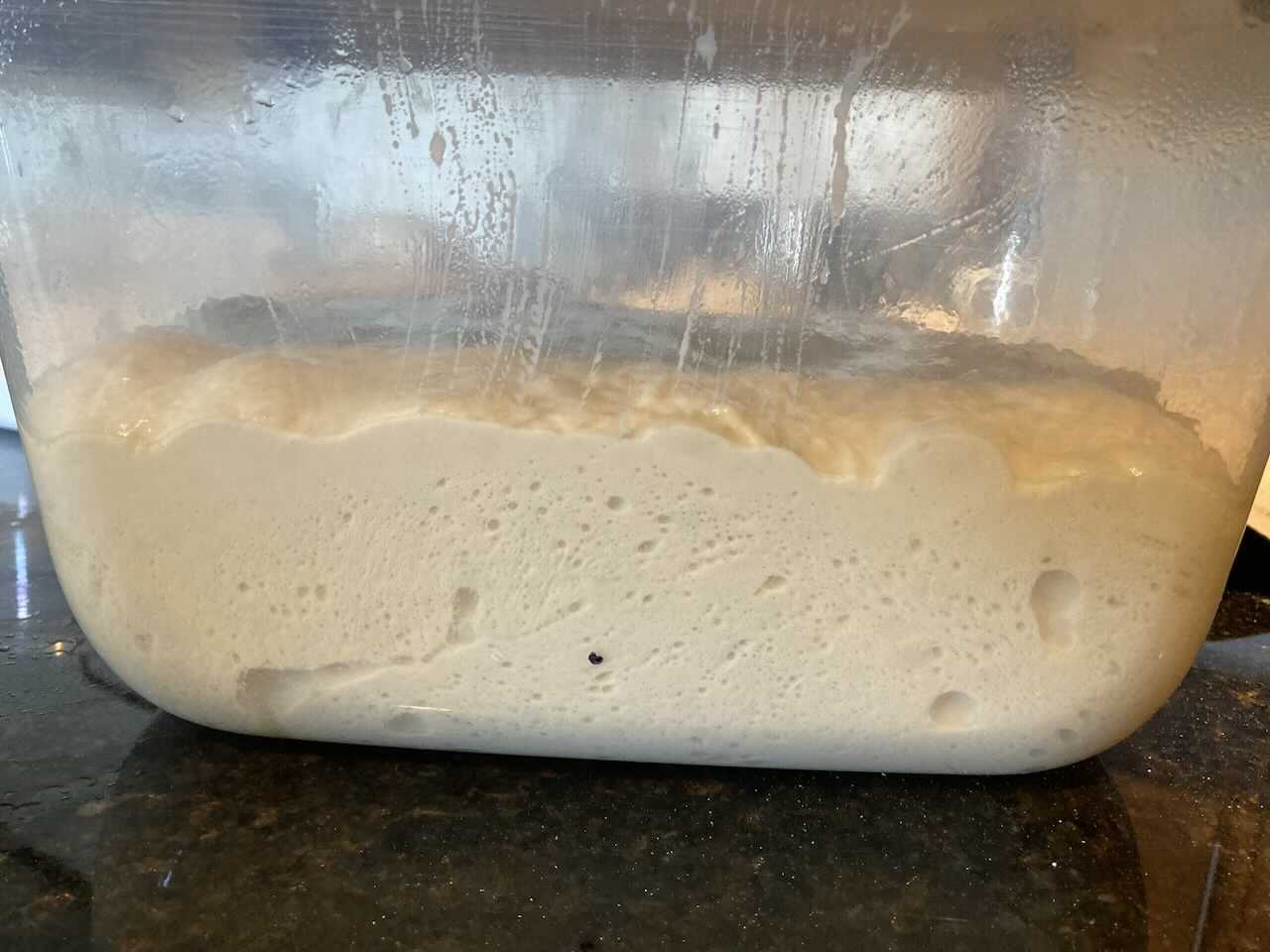 Overall I feel as though there was some technique improvements, and a better loft on the loaves, but I was expecting more from the shaping, which is usually not much of an issue with me. 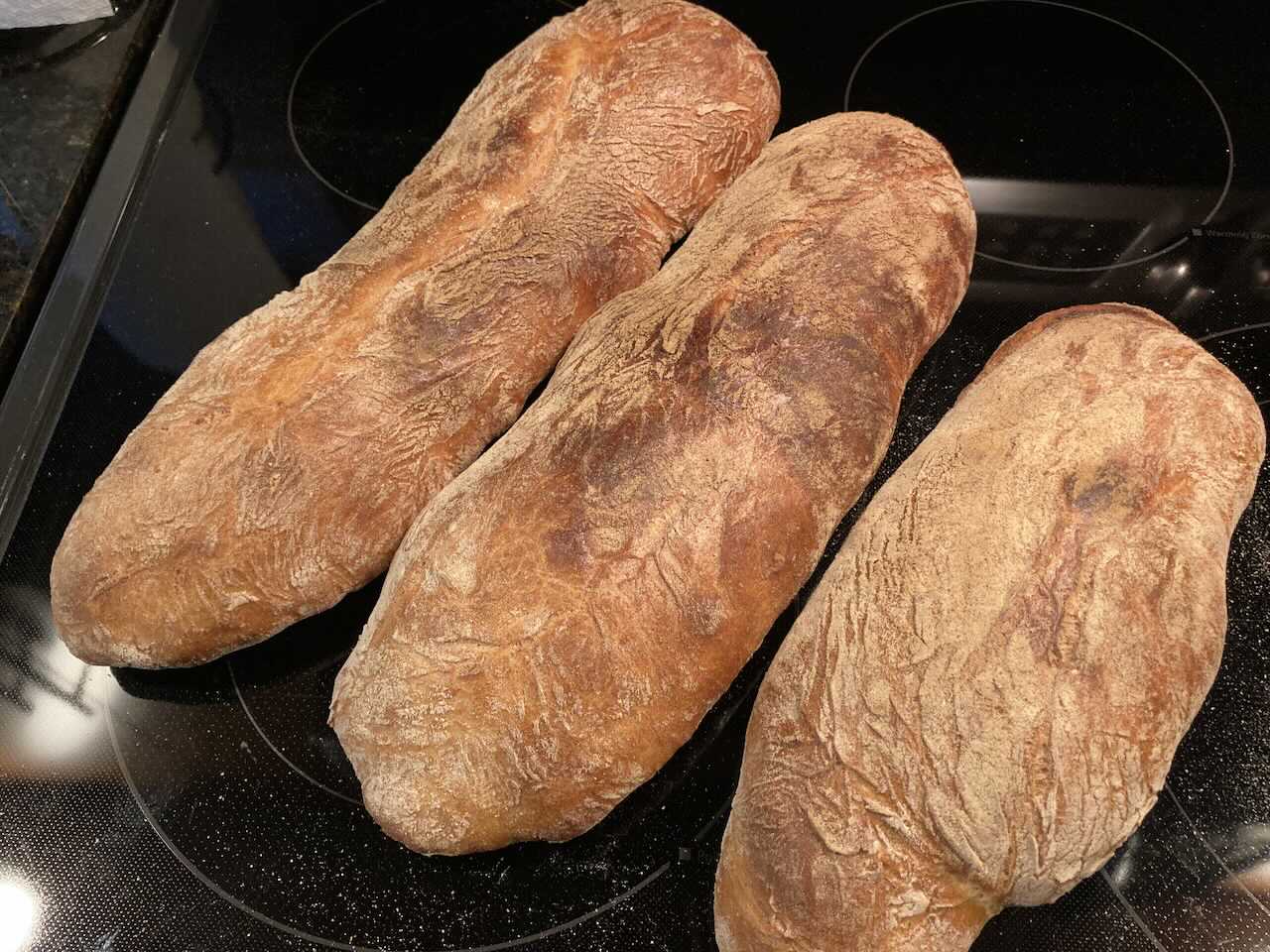 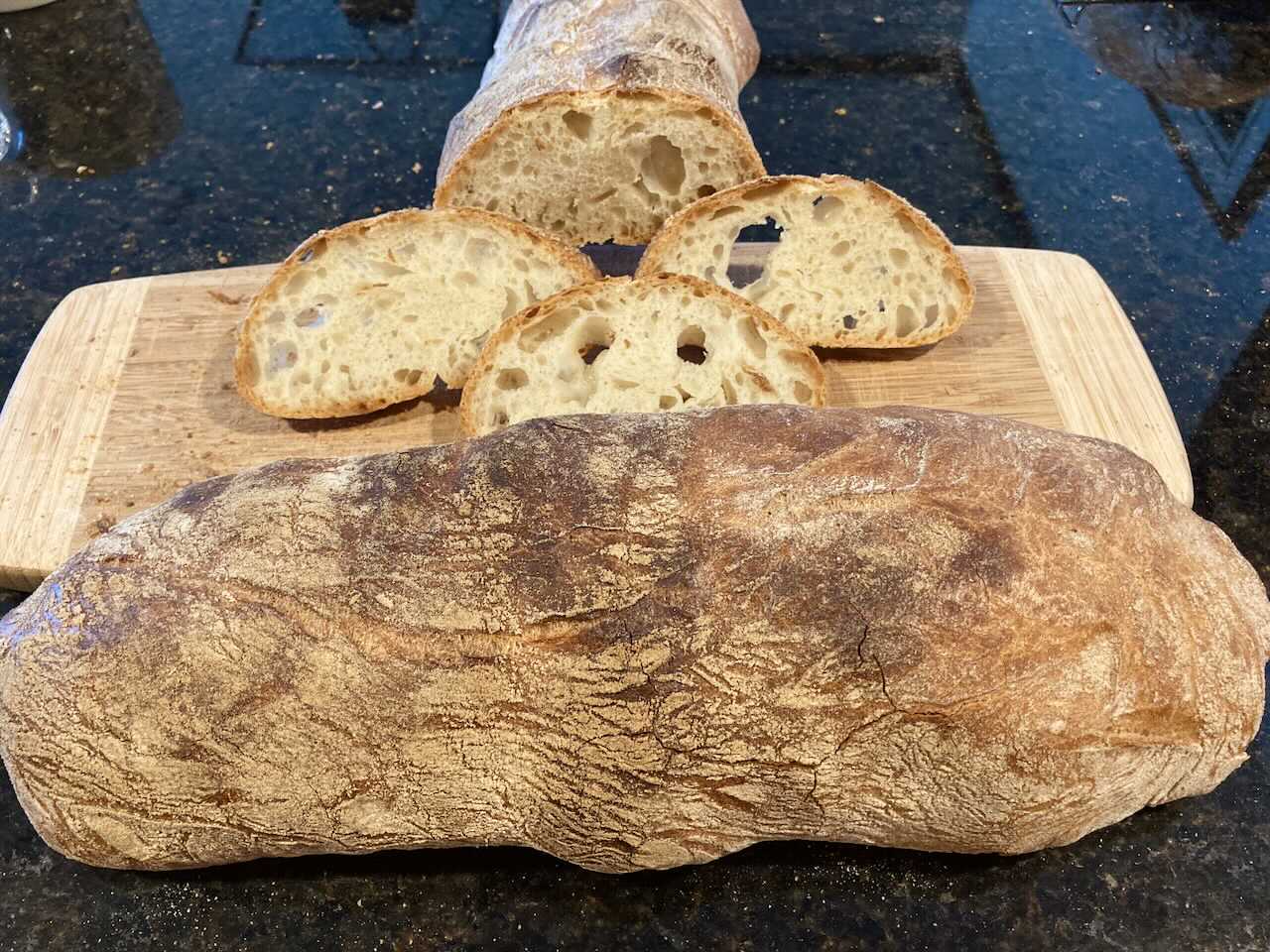 Nice ciabattas Alan, you’ve baked many different ciabatta formulas do you have a favourite that you’d recommend a baker who hasn’t bake a decent ciabatta yet?  I do want to try ciabatta again but I don’t want to do one with a biga that would kill my mixer when mixing.

which should "be no problem" for a Kitchen Aid type of mixer.  My favorite biga formula is the Scott MeGee which I've converted to a 100% hydration levain, so that may be a good starting place for you.  And now that I've gained confidence in letting the time do the work instead of only the mixer, you may be able to get away with running a K-A planetary dough hook on 2nd speed for ~8-9 minutes, something I'll be trying next time, meaning in a few days.  You will end up with a very loose dough, but over the course of 3-4 folds and ~3 hrs. it should tighten up nicely with each ensuing fold.

With the olive oil it is actually 79% overall hydration.

OK I’ve bookmarked that for my next try at ciabatta, thank you Alan.

Love the color of the crust.

Is there a canonical size for a ciabatta loaf?

with dimensions left completely up to the whim of the baker or the needs of the clientele.  I've seen ciabattae from hamburger size, to Hero/PoBoy/Sub/Hoagie sized to boule to my local Italian bakery which sells them to restaurants and lunch counters where they are ~2-3 ft. long.

Very nice bake. I love ciabatta. I last baked ciabatta with biga in January, but I didn't get the open crumb like yours. Must try again soon.

And thanks for including a photo of the dough tripling during  bulk. It is a very helpful information because different kitchens have different temperatures, therefore I don't like to go by the time specified in formulas, but I rather go for a certain degree of volume increase. In this formula, tripling seems like an ideal degree of rise.

thanks for you kind comments.  In preparation for a trip to see family, I had to get down my "better" version, so I went back to the Scott MeGee biga version, and reverted to in-tub folds at 0, 40 & 80 minutes of a 120 min BF in my 78-80dF kitchen.  The BF rose even more in those two hours.

40% PFF in a 66% hydration biga, 76% total water and 3% olive oil, ~2% salt.  Mixed more aggressively than the Kingdom version until the gluten in the mixing bowl was forcing the dough to slap against the bowl itself.  Can be seen in a video I made on the Giorilli Method https://www.thefreshloaf.com/node/66276/giorilli-ciabatta.  The Ciabatta comes out of the oven looking just as in the video.

Thanks for sharing the Scott MeGee biga formula. What kind of biga do you use for that particular formula? The real Giorilli-style biga that has no gluten development and looks like crumbles, or do you create an actual stiff dough? By the biga's hydration of 66% I am assuming the latter. I don't have a mixer, therefore for me the Giorilli-style biga is simply out of question. I made an attempt once, and mixing those dry bits of biga by hand into the final mix was impossible. I ended up mixing it for one hour, and the dough was still not smooth. But I have found that if I mix the biga until it becomes a dough (of course more hydration is needed than the stiff 45% by Giorilli), I don't have any problem mixing that into the final dough. Do you think that the MeGee formula can work without a mixer, or it might ferment too fast for the gluten to develop by itself over time? My experience is that ciabatta formulas that allow enough time for the gluten to develop can be done by hand as well. And the 40% prefermented flour in the biga in this version already comes with full gluten development after an overnight fermentation, which is an advantage I believe. Maybe I could get away with it by hand?

By the way, I have seen your video of the Giorilli ciabatta on YouTube. They look great!