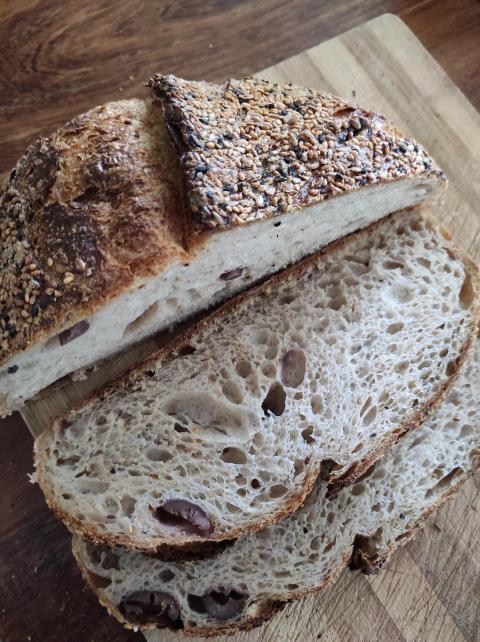 So, I was inspired by Dan's post to try a new drug, errr... ascorbic acid (vitamin C) in my baking. And I also did a little bit of reading up on this site and saw that Doc. Dough recommended a much lower amount than was used in Dan's original post - 20-30 ppm of ascorbic acid.

The flours that I bake with typically have a low protein percentage of around 11.4g/100g or so, and in the past when I've tried to push the hydration too far I've ended up with flat breads, so my thinking is that the effect ascorbic acid has through  strengthening the gluten by oxidative bonds is something that could help my particular breads at the higher hydration.

By adding some vital wheat gluten, I've been successfully baking with these flours at high hydration, but the 'mouth feel of the bread' isn't the best. The bread becomes a little bit too springy for my taste, and some of that soft feel in your mouth can get lost.

As you can see from the photo above, the ascorbic acid appears to have allowed me to continue making soft bread, even at the higher hydrations, and without adding VWG. Got a great crumb at 80% hydration, even an ear.

Why I say 'appears' though is that I didn't really bake a control bread without the ascorbic acid, so this is still unconfirmed. And to be fair, my baking method pushed the dough to develop gluten quickly. This may have allowed for my flours to cope with the higher hydration. The baking method used on this bread had a lot of dough manipulation up front: after the 1 hour autolyse the Kenwood mixer was used at speed 2 for 5 minutes to incorporate the levain; then for the next 10 minutes hand bassinage was used to slowly increase the hydration from 70% to 80%; thereafter the salt was mixed in by hand, and finally after that it still needed another 5 minutes in the mixer again on speed 2 before the bowl was running clean again. So a fair amount of dough strengthening immediately after adding the levain. Never mind that a lamination was done after that to incorporate the olives into the bread. It is still an outstanding question for me then if the dough strengthening manipulations on their own were what made this bread better; or even if the vitamin C allowed them to work effectively.

Adding such a small amount of ascorbic acid in the home kitchen isn't simple. By mass, and by my math, 25 ppm of ascorbic acid means the 400g of flour used in this loaf works requires 0.01g of ascorbic acid. A 500mg vitamin C tablet was dissolved in 500g of water in a jar (see photo below). I just let it sit for two hours swirling occasionally. There were still sediments in the solution once the pill was fully dissolved, for which I made the optimistic assumption that that would be insoluble parts of the binder as I think ascorbic acid itself, even in crystalline form should dissolve into the water in a couple of hours. Only 10g of that solution was then used as part of the water added to my bread during the autolyse. The remaining 490g was not used in the bread, but I did drink half of it and boy you can certainly taste that it had ascorbic acid in the solution!

I'm enjoying the soft feel of this bread, and keep going back for more and more slices. Hopefully I'll manage to work out where this bread went right, either it isn't a fluke and the ascorbic acid trick is the reason or it may simply be that hitting it hard and working the gluten strongly from an early stage is what made all the difference. 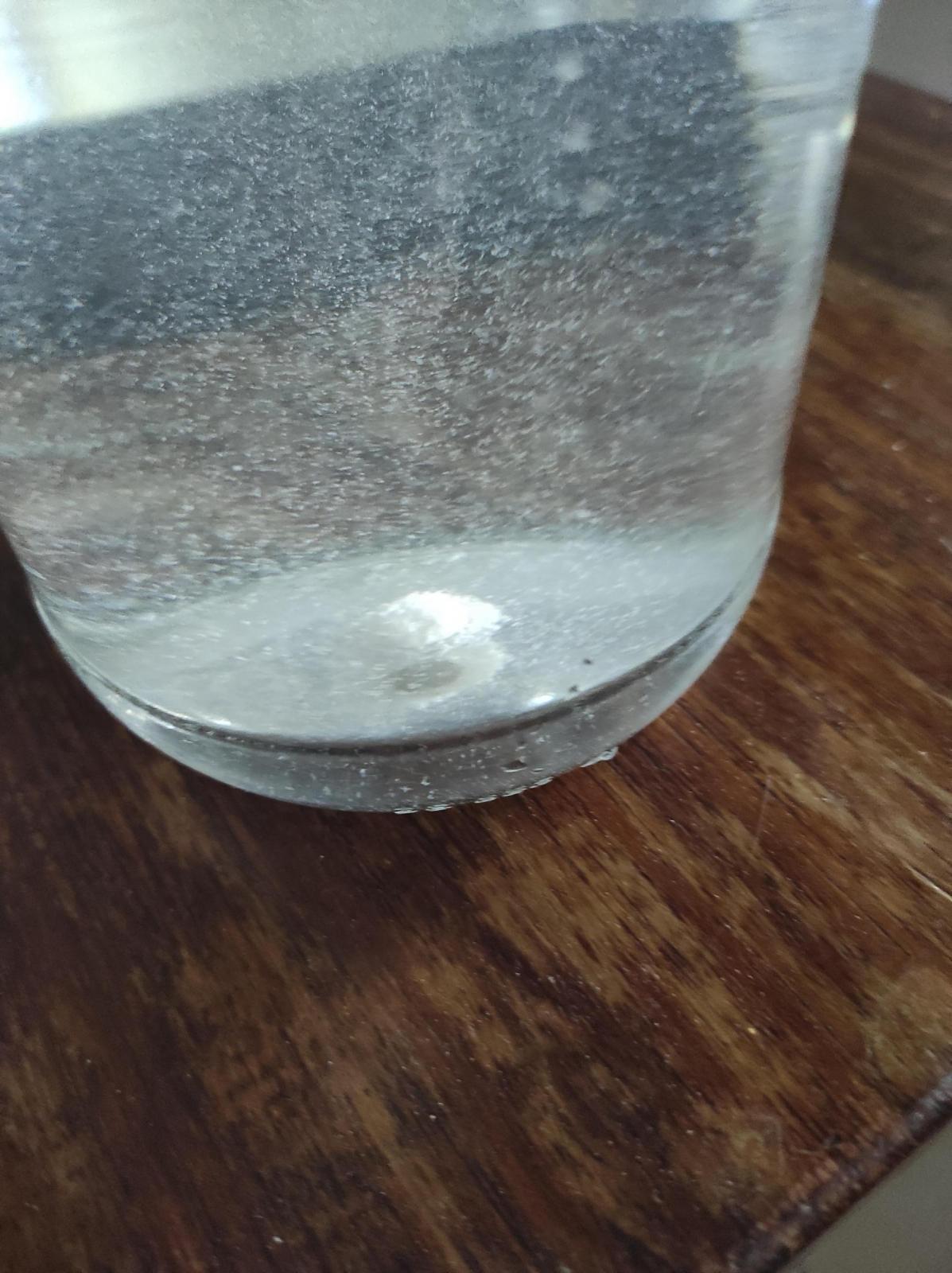 Swirl of sediments as the tablet dissolves. 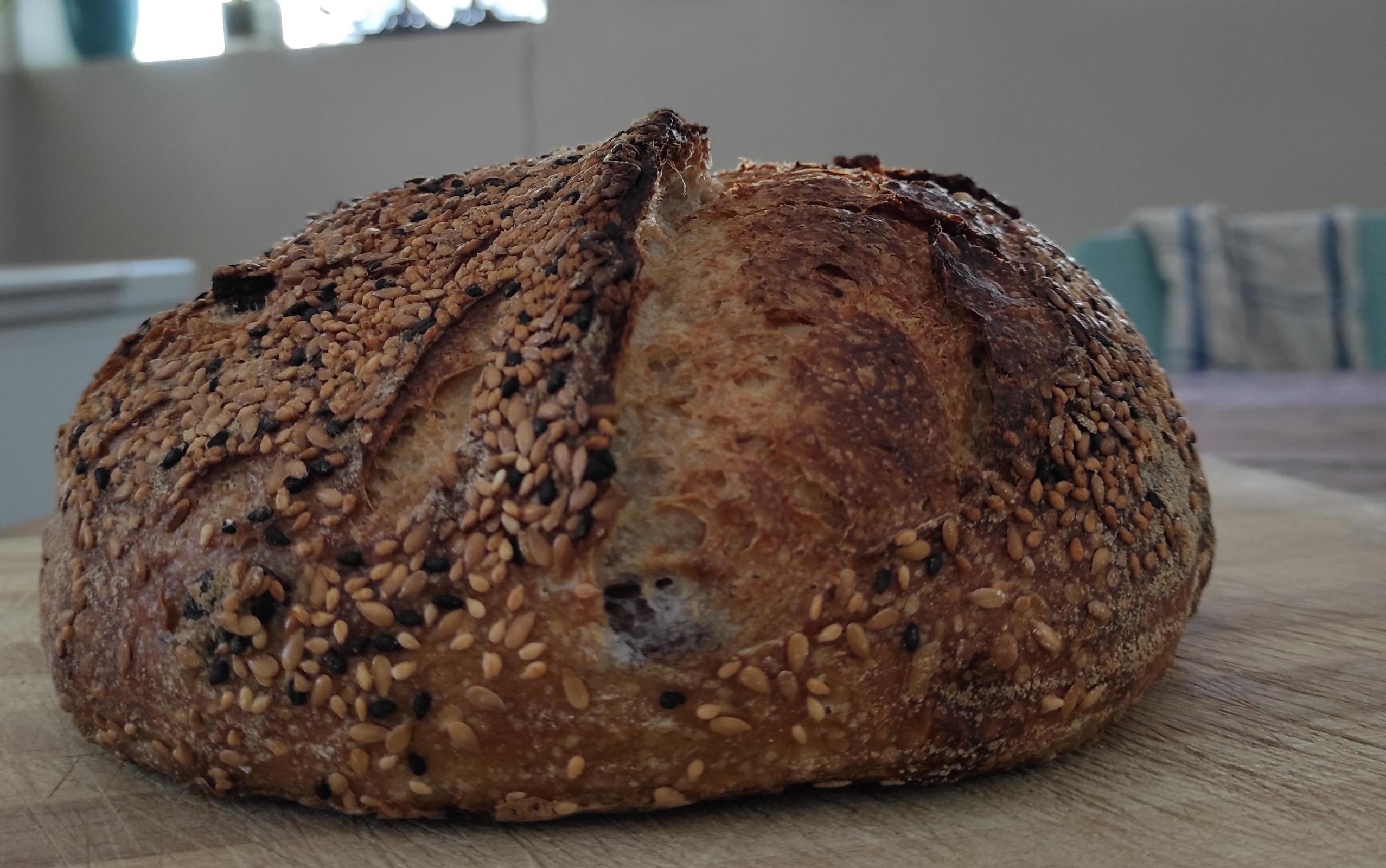 Very very good looking bread you baked there Jon, right up my alley with the seeded crust and the olives inside.

You’re doing what I’ve been trying to do by developing the gluten up front.  I think this is an effective way of attaining an open crumb by allowing the dough to retain the gases produced maximally.

You’ll now need to test your hypothesis and do the same bake without the Vitamin C.  I look forward to that bake.

I had a similar brief experience with adding vital wheat gluten. It made the crumb rubberlike and the flavor was not good. Your crumb looks great. Olive bread is one my favorites it's almost compulsory around our house for tuna salad sandwich.

Really nice! Thanks for this, I have been wondering about vitamin c effects. I suppose another experiment would be to use a little fresh squeezed OJ. 100 gm of OJ reportedly has 50 mg of vit c. You could see if substituting 20-25 gm of your water helps as much or ?