My starter has become very strong

My starter has become very strong 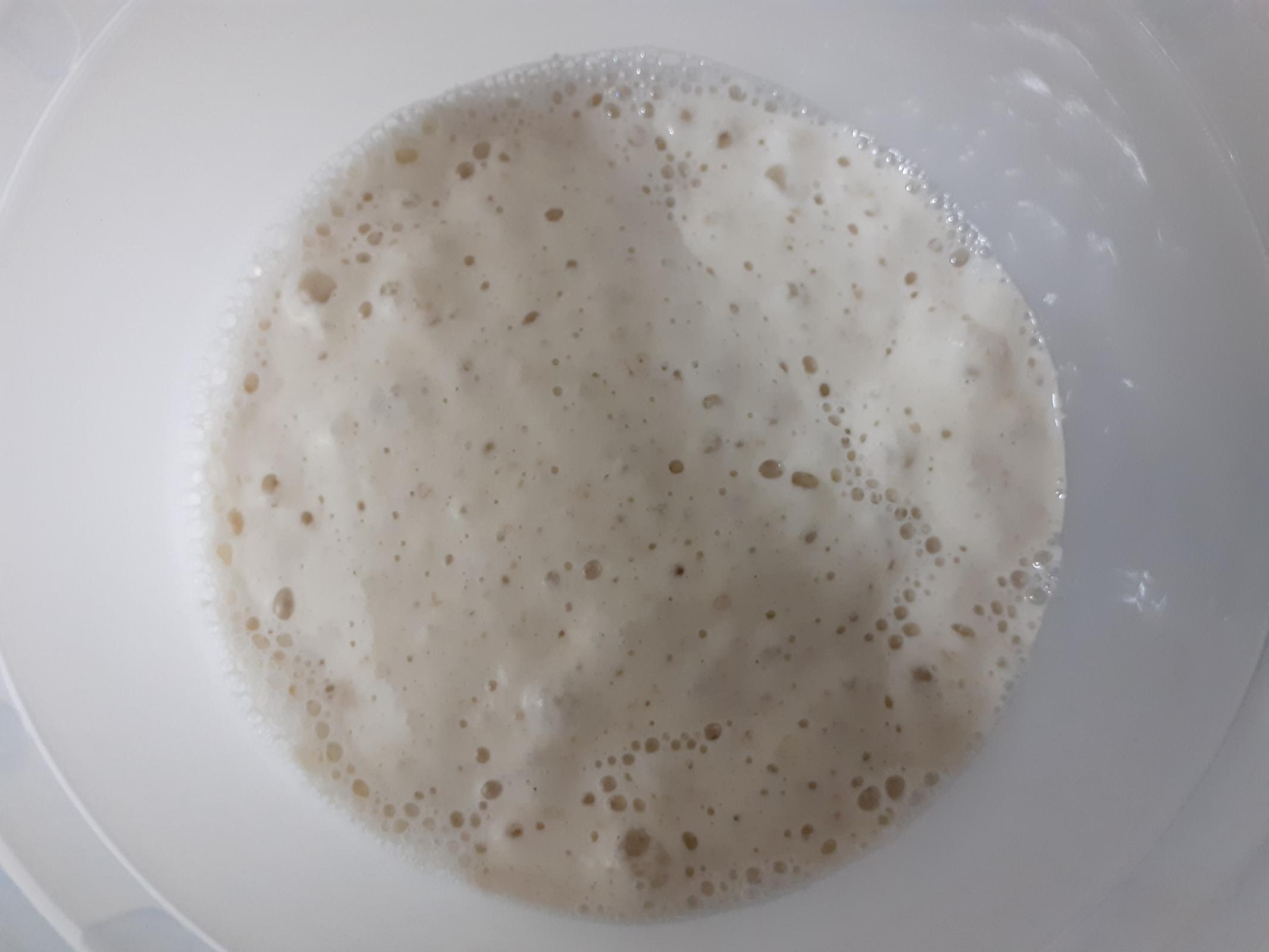 Put together a Hamelman levain at 8pm

Within 4 hours it was very active. 6 hours and it's peaked, with bubbles bursting through the surface and has a lovely aroma (almost sherbet like).

Question is should I just leave it and go to bed. It will sink and I'm thinking continue to bubble away albeit at a lower level. Is this normal, do you think it can over ferment and run out of food? Or will I just get a more tangy levain?

Another question just occurred to me. People talk of over fermenting a levain but what do we mean by this? Surely it's just a line on the maturity scale and as long as there's food left it's fine. But a dough is often not fermented as long as a levain, and will be considered over fermented in a shorter period of time even when the inoculation is of a similar percentage. We often ferment levains a lot longer than the final dough but they're still good with food left. So just what do we mean when we say an over fermented levain? For instance 20% levain in a final dough will never be fermented at room temperature for 12-16 hours but this is exactly what is called for in this Hamelman levain.

I'm thinking we do often 'over ferment' a levain. At least when referring to what we consider over fermented in a dough! In reality there's a lot more food left and life in both. Perhaps not for a tall loaf but enough for a levain at least when we're not aiming for a loaf yet. With the levain we're looking for it to activate and catch it along the maturity for an outcome in taste. It's ok for it to peak, sink and continue to mature till we've achieved the desired level of acidity. So my next question, if I'm right, with the above levain build what is the timescale for when all the food is used up and it's actually spent. Either too acidic and not tasty or good for the final dough or totally out of food.

If you want to slow it down you can decrease the % starter and/or add some salt. He discusses the amounts and strategies in the book. Note: Hamelmans says to use the levain at its peak of ripeness, ie the highest level of activity.

I've uploaded a photo. I used starter from the fridge which was fed over a week ago and used cold water. It's cold outside (about freezing or just below) but inside it's about 75°F (at a guess). Would a few degrees make it so much faster? The temperature will drop or do you think I should play it safe and refrigerate? 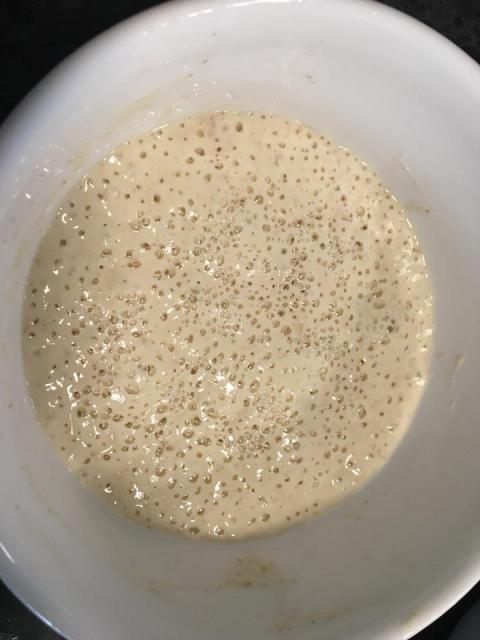 At 75°F I would decrease the amount of starter to 10% and it should ripen over 14 hours. I've done that before many times when I had a home built proofer I couldn't adjust. I never refrigerate a starter I'm about to use. Picture of my ripe levain for comparison.

And it's 2.10am. Off to bed now. A bit too late for me to do anything. Can I risk another 6-8 hours? Wasn't planning on having to use it till the morning.

Next time I'll do that ratio. Thanks for the tip.

Edit: I used it after 16 hours by which time it had sunk quite a bit but with loads of frothy bubbles... 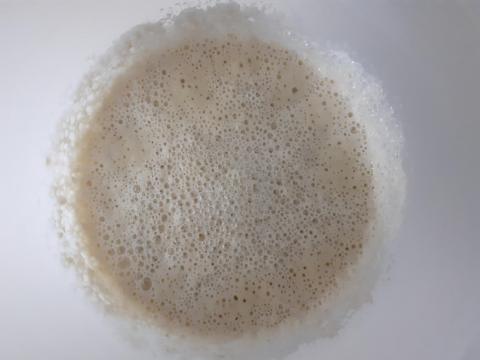 Yes. Nothing to lose.

I'm going to risk it. Still has a bit of a way when comparing to your levain. And perhaps the very high hydration can make it bubble more and peak sooner but still has a way to go. 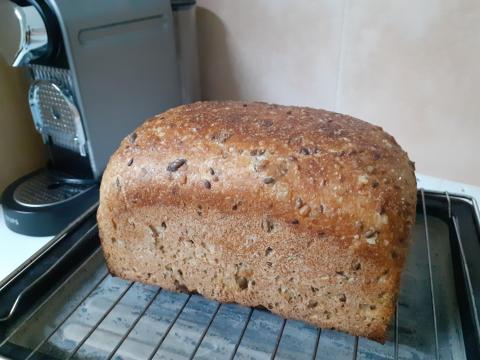 Worked a treat even when allowing the levain to ferment for the full 16 hours. This is Hamelman's Five-Grain Levain albeit with some changes. For the whole wheat I used wholegrain kamut flour. Instead of cracked rye and sunflower seeds I used cracked (in my coffee grinder) pearled spelt and pumpkin seeds.

Thank you for your time and advice.

Gorgeous loaf Abe.  So nice to see how using a levain well past peak still works so well.  Did you find that it was more sour than usual?

But I thought "in for a penny, in for a pound" and did the whole 16 hours! It appeared quite passed its peak. Sunk back down and lots of small frothy bubbles. Still it performed very well so while I'm happy at the success I've got more questions. It's cooling now but so far so good.

It has always been my impression when reading about levains that if used well past peak that the microbes having run out of food would be dead.  That never made sense to me.  Your bread certainly refutes that idea.  Now acid load potentially could be an issue if left really long, but in a loaf bread it would be less of a problem compared to a hearth loaf.  Really nice loaf Abe.

Of course they won't be dead, killing yeast and LABs is not that easy! But the balance between them might shift to less favourable, and they might slow down.

But then again that had more to do with the dough being cold and I like longer ferments too. Other then that it seemed to perform just fine. Now I'll just have to seen what the flavour is like.

The oven spring was strong and after the bulk ferment it carried on for a bit in the fridge seemingly with enough steam left for a strong levain.

Yes totally makes sense which is why what is posted about the microbes dying didn’t make sense, they are tougher than that.

But the more I bake the more I realise the more I don't know. Just when I think I've sussed it all out this happens. Makes one wonder out of all the things we've learned about sourdough just what is true and what is just tradition.

My motto is... As long as I get a tasty loaf out of it that's the main thing.

Experiment away, Benny. Re-write the rules!

Nice to go to bed after a successful bake. Happy New Year.

Well done! That's a fine-looking loaf. I thought the levain looked a bit over and wasn't sure how you would go. Just shows that it's worth a try, after all, there's not much to lose.

Helped me immensely Gavin. Had you not said go for it I might have played it safe. Now I've learned another lesson in the seemingly neverending learning curve of sourdough. Thank you!

If you haven't tried this recipe yet I highly recommend it! Search for "Community Bake Hamelman's Five Grain Levain'. You won't be disappointed.

Edit: here it is with the recipe.

That's looking great Abe, looking forward to a crumb shot! And the tasting notes - does overripe levain bring very strong tastes? I'd bet not too much, actually.

Is the lactic acid notes in the final loaf. It's a tang but more rounded and not as harsh as acetic. It doesn't drown out the other flavours which come through as well. I think it's the very high hydration levain builds and I'm fully expecting not an overly sour bread but perhaps a touch more pronounced yoghurt-y flavour.

Thank you Ilya. Experimentation is the key. Was a bit wary of leaving it so long but also curious.

Hope the taste is as good as the look - and you just might like it even more, who knows!

I haven't actually tried any recipes with >100% hydration levain, I don't think... Or I don't remember. Of interest, I learned from some Rus Brot's article or video, rye sourdough is never used at 100% hydration in bread production in Russia, following the standards at least - it's either more liquidy, or more stiff (80% is very common, as I understood). And 100% is just a convenient hydration to work with at home, while other hydrations levels might actually produce better bread. Just thought I'd share this bit of info.

I think 100% hydration is easy because you always know where you are. 50:50 water and flour. Hamelman has two types of pre-ferment. Either a low hydration using a stiff starter or 125% hydration. If you've never tried it I highly recommend it. Lovely flavour.

Yes. YES! That's the perfect word that describes my own first bake this year. Just a different sort of flavor that I've never tasted before in my own breads. It's..."different."

Typical of a pullman sandwich loaf. Flavour is excellent and the seeds, especially the pumpkin, shine through. Very happy with the results. Comparing it to a younger levain it's just more intense but pleasantly so. Just a more apparent nice pleasant tang that is synonymous with this bread (and the high hydration levain lactic acid) as supposed to any harsh acetic acid tang. 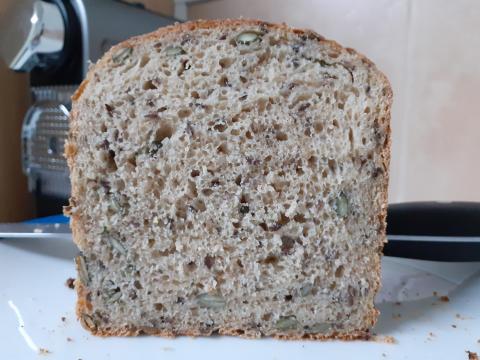 Great looking crumb Abe, just what you want from a sandwich loaf.  It looks like it is very hearty, yumm.

And very tasty too. Toasts up really well. I wonder if it'd make good baguettes. If anyone could do that justice it'd be you.

Very nice. Looks delicious. The crumb is lighter than I expected. Cheers.

But the crumb was a nice surprise. Actually a contender for my best bake of this recipe. Thank you Gavin.

Looking good Abe, must be delicious! We should exchange some bread one day.

All in all very happy with the bake. We should some day! When the situation normalises. Hopefully 2021 will see the end of this pandemic.

Hope so too! It's pretty bad at the moment, particularly over there in London and around, hope you stay safe.