Danny had suggested an experiment on the impact of different % increase in volume during Bulk Fermentation on the final loaf.   proposed-experiment-bf-rise I decided to try the test, though due to scheduling issues, and a few math errors, it did not go as planned.  If you want the short answer,  I did not see any material difference.  My wife said they all tasted the same.

I normally use home milled winter white wheat, but went with KA BF and KA WWW because that is more readily available.  My final loaf ended up with 337 grams levian ( due to  a math error ) at 125% hydration,  500 grams of KABF and 100 grams of KAWWW in the final loaf with 14 grams of salt.  The flour in the levian was a bit more than 20 % whole wheat.  The loaf was 69% hydration 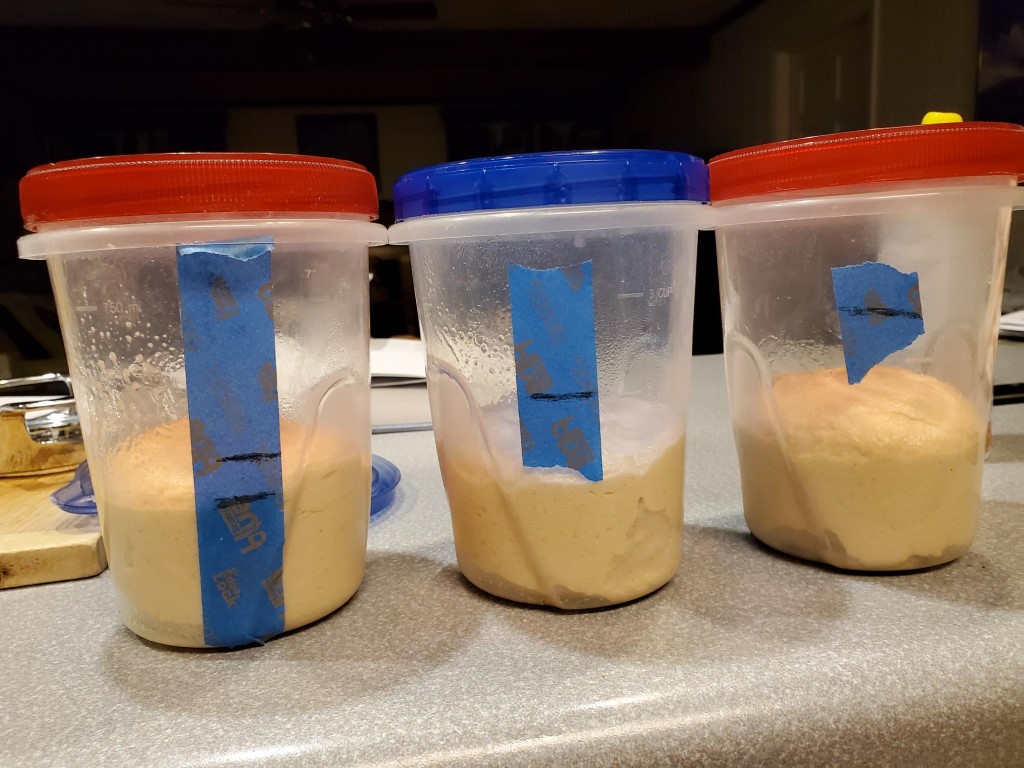 I then checked on them ,  and took them out one by one.  As Mini pointed out in the earlier thread, there is a bit  of judgment - since the dough rises a little higher in the center of the container.  The first one was ready at 2 hours, the next 2 1/2 and the final one about 3 1/4 hours. 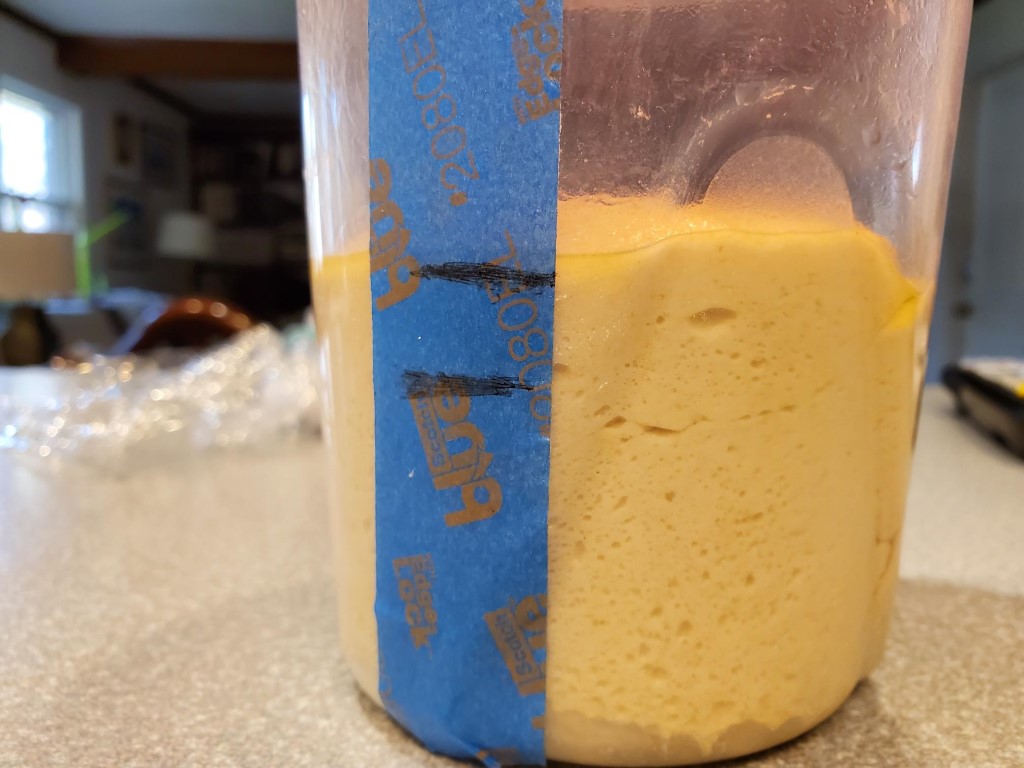 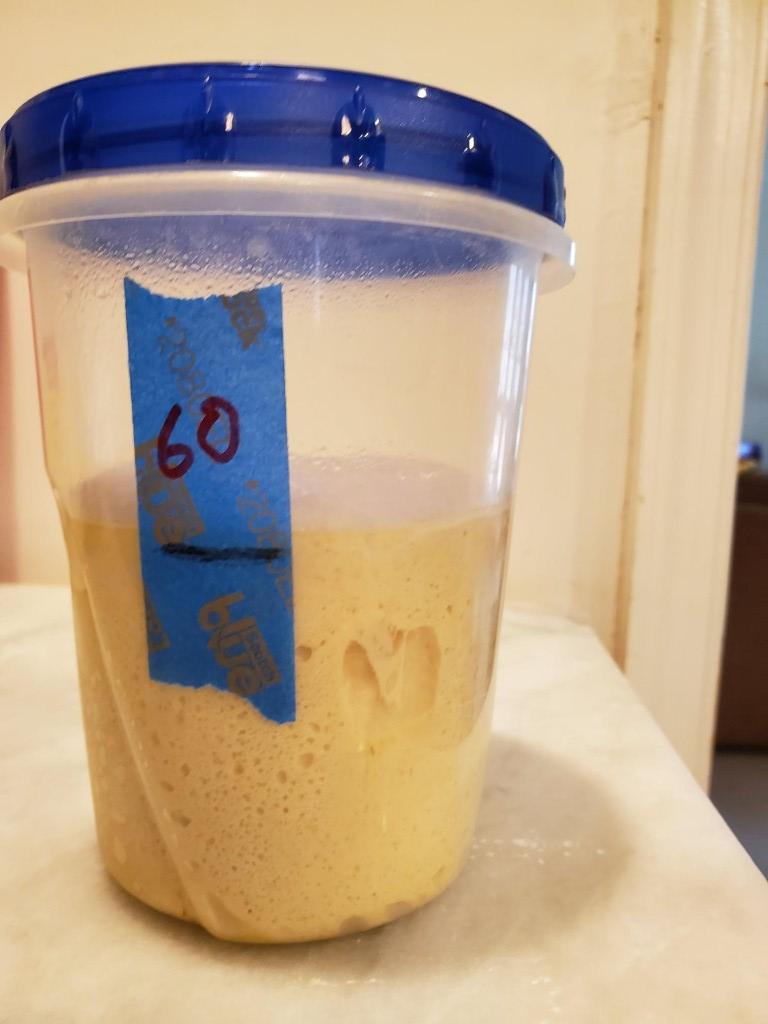 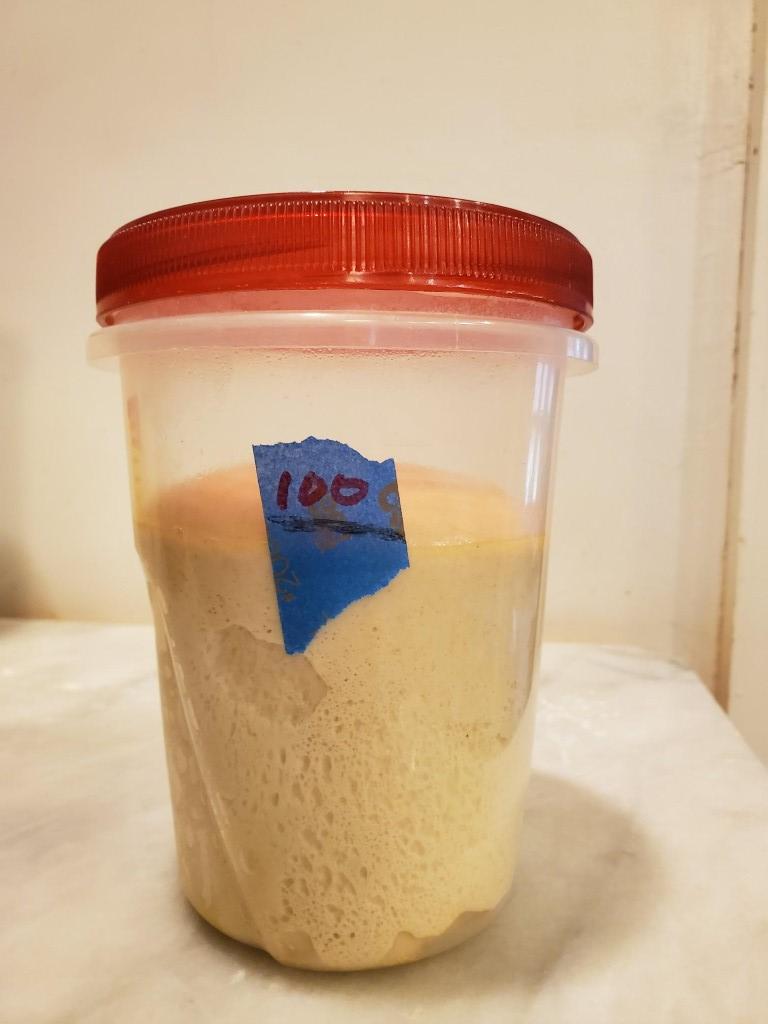 Since I was concerned about the impacts of shaping and scoring, I tried to do every one the same.  I used the Martin Philip method of shaping batards in the Hamelman video   Hamelman Shaping video   I didn't do a preshape, just dumped it out, waited a minute or two, and followed the same routine more or less for each one.  As soon as the loaf was shaped, it went into a couche, and into a refrigerator.  I had hoped to let them proof overnight, but scheduling did not permit, so about 4 hours later, I checked the internal temp of each ,  and they were uniform at 41 degrees,  so I put them in an oven at 90 degrees for 10 to fifteen minutes to get them a little more proofed  ( it is usually extremely hard for me to judge that,  and this case was tougher since I never work with bread flour).

All three went into the oven at the same time seam side up ,  to avoid any differences from scoring. 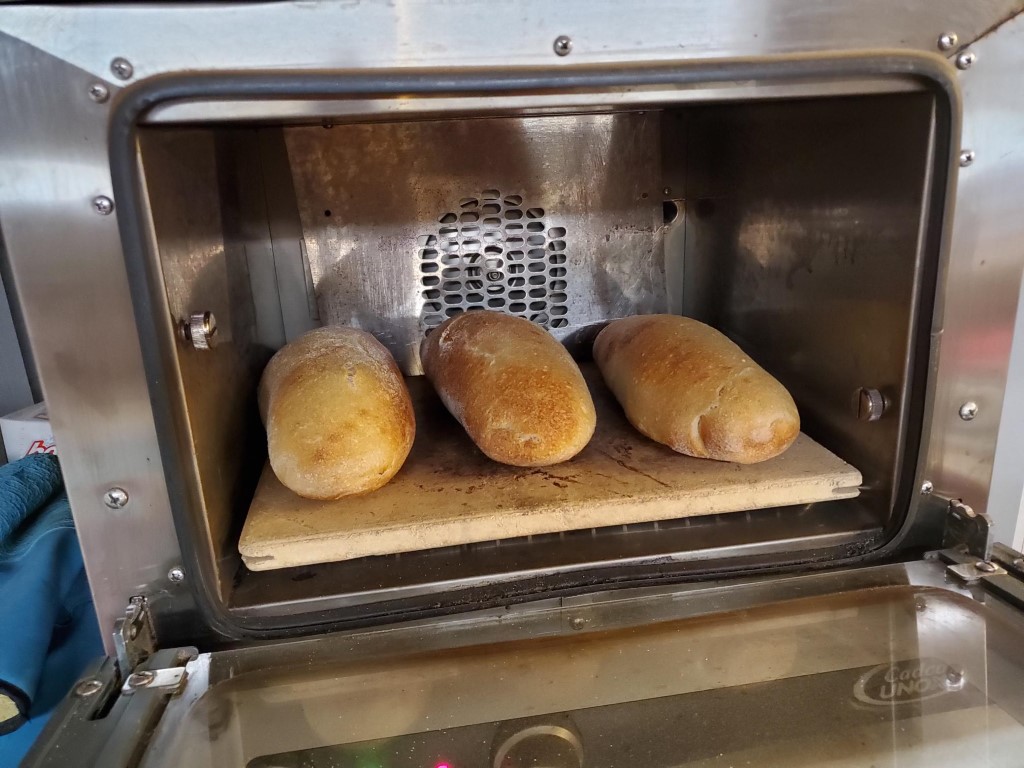 And all came out -      the same -  the one in the middle was 60 % rise in BF, though it was a little shorter than the other two , that could be due to shaping, or the transfer from the couche to the peel. 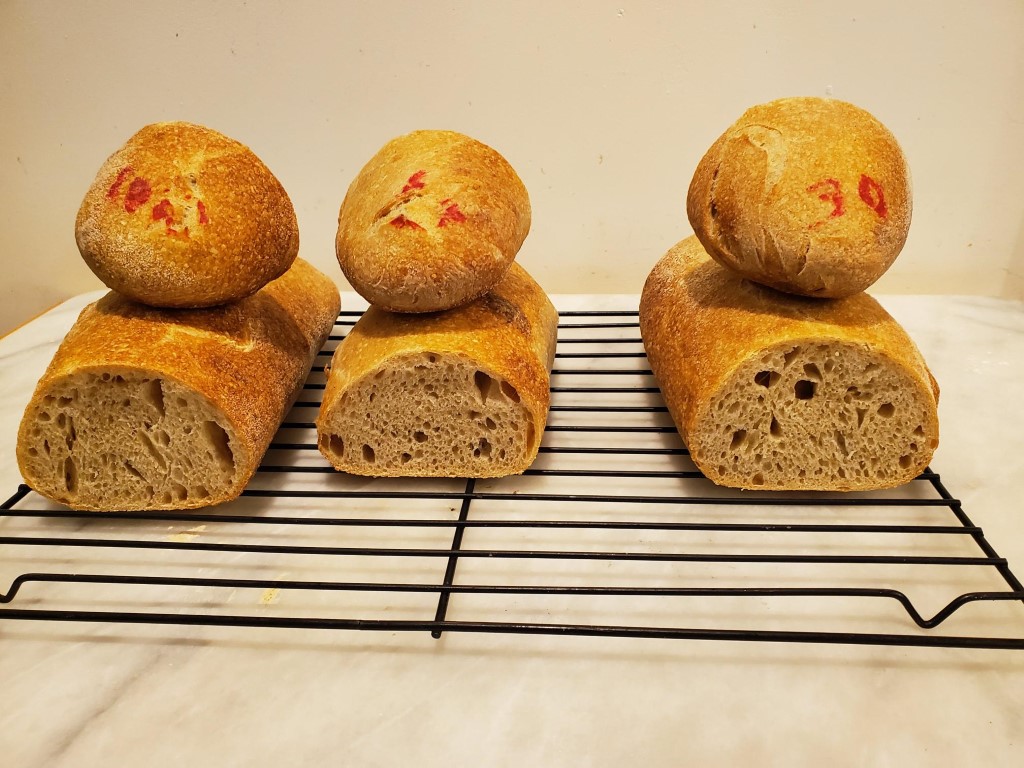 It may be hard to see, but from left to right,  100%,  60%,  30%  -  and  thanks for the suggestion of a permanent marker, I never would have kept them straight.    I wonder if they were a little overproofed,  I did not see much sign of splitting at the seams, but they did have a fair amount of oven spring, so maybe not.

this experiment! Now that your results are in, the questions will certainly arise!

Ok Barry, it seems this experiment didn’t make huge differences in the final breads. But this in itself, is a lesson learned. Either the test is true or improvements on testing is necessary.

How can we improve upon the next test?

What were the lessons learned?

From your PM it seems we are concluding that the specific gravity of flour may get us in the ball park for estimating dough volume as it is converted (ml to g) to grams of water. This is no small thing for me.

I appreciate the time and effort it took to perform the experiment. I hope others continue to test (I plan to) in an effort to add to our knowledge base. It doesn’t seem plausible that there is no difference between 30 and 100% increase in the dough during BF.

Do you think a boule might be more consistent to shape? Where the doughs too small, or were they large enough?

Your experiment should give us info to improve the next one.

Danny,  I don't think the batard shape was a problem, though I don't have 3 bannetons, so I was not able to do 3 boules anyway.  My guess is that the main impact of BF won't be seen until BF goes too far in exhausting the food supply, leaving too little food for the final proof.  I may run a similar test with home milled whole wheat next week to see.

I've done the trial as well, so I know there's quite a bit of work there.

I'll add my results into this thread as soon as I get a chance to write it up.

Did you ever get a chance to post this somewhere?

You might want to check the community bake for baguettes.  IIRC they did a lot of experimenting and for that shape and recipe, they found that a 30% increase in volume during BF was ideal.  https://www.thefreshloaf.com/node/64622/community-bake-baguettes-alfanso

I actually found I bulk to 20% and make sure I bake before it hits 30% when I do baguettes.  However, for batards I typically bulk to 60% now.  Different breads require different bulk fermentation.

That seems to be a great resource.  I will definitely read this before trying my first baguette, but I suspect there is a lot of good general purpose information to be had.

Sorry, I never did add those results. TBH, I don't think they were very conclusive.

My thoughts on % rise during bulk have matured somewhat and currently I'm thinking along these lines:

I like the idea of tailoring the shaping method for the fermentation schedule.  At the extremes, it seems one can either create CO2 with a long BF at the risk of degassing during shaping (letter fold shaping), or one can shape early and create CO2 later during the longer final proof at the risk of flattening (tight shaping/stitching).