Hi there.  I had a pretty good disaster with this recipe.  It was the second time making a Hamelman recipe. The first time I did hand mixing and folding aka Forkish/Robertson/Hamelman slap and fold.  The bread turned out pretty good but not as good as my breads following Forkish or Robertson.

My second attempt was using my new 6 Qt KitchenAid professional.  I mixed using the times in his book and from info online and here to try and get about 1000 revolutions.

During the first mix the dough came out very smooth and resiliant instead of shaggy as described in the book. I did a bit more mixing but less than requested. The dough seemed to have  a LOT of gluten development and was quite 'solid' yet elastic.   I wondered at this point did I overmix it?  Now this recipe is lower hydration than my other attempts at bread (about 40 bakes so far).

Now I built the levain for 125% hydration as requested but it was spent when I went to mix the next morning so I used by good 80% hydration levain and added enough water to bring it to 125% hydration.

So I have two potential problem areas

When I baked the crust was good, oven spring was so so, crumb was dense with a couple of very large holes (maybe an inch in diameter that went through the whole loaf. Taste was good but texture was lacking.

I know I should rebake the recipe but I shied away and went back to Robertson/Forkish.

Any insights or comments?

Hi David, we just featured Hamelman’s Five-Grain Levain as our community bake. You can see the post HERE.

My best advice would be to post images. That would be helpful.

I recently concluded with Hamelma’s Five-Grain Levain that I was over mixing using the mixer. I over developed the dough prematurely. My new method is to mix via hand and use Slap & Folds. It worked out extremely well for me.

If you would like to try the Five-Grain, we’d like to see your results. Please post to the link above. There are many available bakers ready to assist if needed.

At any rate please post images for best help.

Oh! The 125% levain with a 12-16 hour ferment blew my mind. TOO LONG. But when I fermented at 70F for 12 hours it went well and didn’t over ferment. I find his instructions go against popular consensus, but when I follow them, I succeed. Example: add large percentage of seeds into the initial mix. Most wait until after the dough develops. And then the 125% levain for 12-16 hours and so on. IMO, given the choice, stick with JH :-)

Thanks for the reply Danny.  My VERY late response.  I did not take pictures...I usually do.  My conclusion after getting back to baking the Vermont Sourdough again using my KA mixer was that I totally screwed up the percentage of ingredients and the hydration was way off because I am now baking fabulous Vermont Sourdoughs...

I have recently started making my own recipes with the flour I have on hand...for example today I am doing a recipe I am calling Buttery White...it has 10% Red Fife Whole Wheat and 10% Kamut flour which gives it a nutty/buttery taste and a slightly yellowish buttery colour to the crumb.

I have also done a 12+ hour pre ferment (by accident as I forgot I was baking). The next morning I got up aghast, shaped the loaves, did a shortish proof, and guess what the bread turned out pretty good. 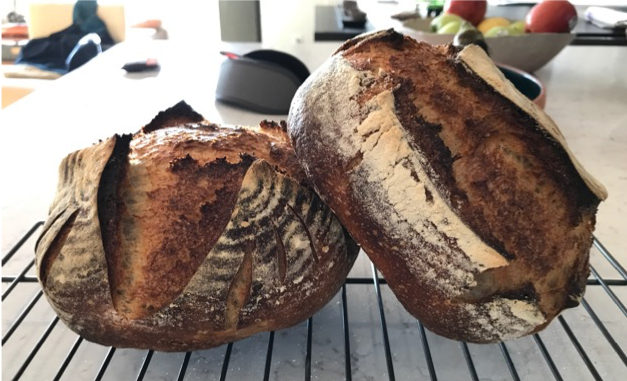 I’m a baker at Dahlia Bakery in Seattle who recently took a class with Chef Hamelman. I was struck by how he routinely under-mixes, according to the applicable formula. He pulls on the dough to gauge strength and never uses the windowpane test, which he says results in over-mixing and decreased flavor. He does pay strict attention to desired dough temperature, however. If the temp is correct and your dough shows strength, you’re probably good to go.

Thanks for the input Steve.  I never really used the windowpane test because I always found that when the dough felt right it still didn't show the windowpane.  I also am a fan of not overmixing. Strangely enough what twigged me on to this was making Aish Baladi (Egyptian Flat Bread - I used to live in Egypt).  Over mixing it not only decreased the taste but destroyed the delicate structure of the bread and made it much too chewy...so then I thought maybe this is an issue with other breads...

I would love to take a class with Hamelman.

You may be interested to know that our next bread featured in our Community Bakes will be Hamelman’s Swiss Farmhouse bread. It will probably launch in late July.

That bread is a favorite among many. I uses a simple to make raisin yeast water for the levain.