Tips for Achieving an Open Crumb with All Purpose (AP) Flour

Tips for Achieving an Open Crumb with All Purpose (AP) Flour

I know that using a higher protein flour like bread flour can help with an open crumb, since it facilitates greater gluten development, to help hold in those gas bubbles.

I'm mainly baking off of a 50lb bag of all purpose (AP) flour. Do you have any tips for maximizing open crumb when your recipe is mostly AP flour, which tends to maximize softer crumb? I'm looking for tips in autolyze time, mixing technique, number of folds and technique, shaping, hydration, etc.

This is an interesting question and Solano, a baker from Brazil is also experimenting with this as he has mainly weaker flour where he is.......

I came across an ebook from an Italian baker Matteo Festo and he has a number of formulas for low protein flour in his book.....

I think in principle - with parking the open crumb question for now - it  means in essence a short AL and a quick mix not to exhaust the little gluten that you have, a fast bulk at higher temps combined with potentially more starter to speed up bulk.

I also found working with UK flour that adding water in phases (called bassinage or double hydration) ensures that you ensure that the flour is not 'flooded' by letting is being absorbed in different stages (AL, adding leaven and even during bulk).

From what I have gathered using AP or lower protein flour has the potential to give you a light and airy crumb.

Trevor J. Wilson has also on Instagram some posts with bakes using pastry flour (a couple of months ago) and it made some amazing fluffy and lacy loaves. I was tempted to experiment too more with AP flour after using it in a recent baguette bake and was intrigued and wanted to compare flour and what it does to the crumb.

I am no expert and just my two cents...  Kat

if that is what you are after,  High gluten flour is good for really long ferments and proofs to give the Protease time to break some for the gluten strands to give you a more extensible dough and some bigger holes and it takes more water too.

AP flour is way easier to work with if big holes is the need.  Not as much gluten strands to break to make it extensible so the big holes really come out faster as the protease works on the limited gluten.  Just don't go crazy with the water.   Even 72% hydration will really do the job for AP white bread and don't think it can be fermented forever or proofed a long time either.

especially after the recent Maurizio baguette community bake using lower protein flour and I think we should have a community bake with AP flour one day.... Kat

dabrownman drives home the point that not all APs have the same protein percentage. This page has a comparison of a few.

to something worthless because it is petty worthless now and I remember how good it was.  They must have been sued by one of the millers: who had been lying about their protein for years:-)

We need to select the link on the left which is titled Flour Test.

Here is the comparison of protein in American flours by brand-it is buried multiple clicks in. Very interesting!

"The problem is that is hard to find the really low protein store private label brands to be unbleached."

Are you saying they're mislabeling bleached flour as unbleached?

that are unbleached.  Most all are bleached and they don't try to fool anyone.  At one time bleached flour was considered the very best you could buy. just like big holes and blisters were considered some of the worst flaws you could have when making bread.  White was the very best ,now it isn't .....but it will be again one day no doubt.  My how times change again and again and again!

Yeah people used to be racist against yellow corn, so someone bred white corn. Absolutely mind boggling. But I never realized unbleached flour was hard to find. I'm uncertain of the protein content, but I know the following stores sell self-branded unbleached AP flour:

I know there a few stores that don't have unbleached flour that would be a little more convenient for me if they did. Aldi and Dollar General both come to mind. But to be honest, I haven't been always been happy with my food stuffs from those retailers. They seem to have a high rate of contaminating their food items with undesirable odors like shampoo, laundry stuffs, air-fresheners or whatever. Maybe it's a good thing I'll never have to considering buying flour from them.

I can not get my starter to kick off, so maybe I'll order some King Arthur organic online.

I agree. I would try lowering hydration to more like 70-72%, and maybe increase your mixing time a bit or add a stretch and fold.

That's interesting what you say about the protease. If I understand correctly, the extensibility is important to achieving a more open crumb, but too much can interfere with the gluten structure. Since AP is naturally more extensible, you need to compensate with a quicker autolyse/bulk ferment or less water.

Am I getting that right?

In few words - everything counts.

With a mostly AP flour, and your 77% hydration, that may be a bit of a challenge.  However, I'll give you an example, actually three examples, of what one can do with AP flour at 65% hydration.

In each run the autolyse time was 30 minutes, there were two letter folds for a 2 hour bulk rise.  Gentle handling of the dough is essential, but you don't have to/shouldn't "baby" the dough.  I pretty much stick to baguettes, so my shaping technique is different than most others', and as you can see from below, an open crumb using AP flour is doable.  As an aside, I really don't care all that much about big open crumb bread, so these are open crumb enough for me.

What it really comes down to has a lot to do with how you handle, and eventually come to know the dough, through learned experience.  Every step is important and the later an error is made, the harder it is to back it out or correct.

Once you find someone else's bread to your liking that you feel will provide an open crumb with AP flour, then work on that one for a few runs to start to get to know the dough.

I ran the Hamelman Vermont SD formula @65% hydration, which is a 90% AP flour dough, three consecutive times as follows.  Other than the device used to do the mixing, everything else was the same. 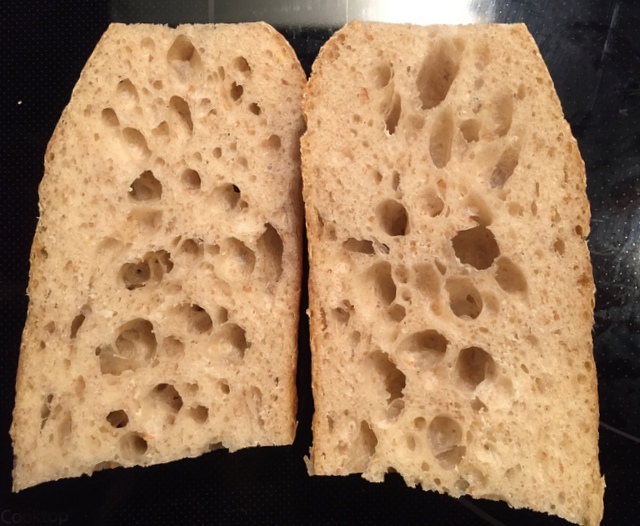 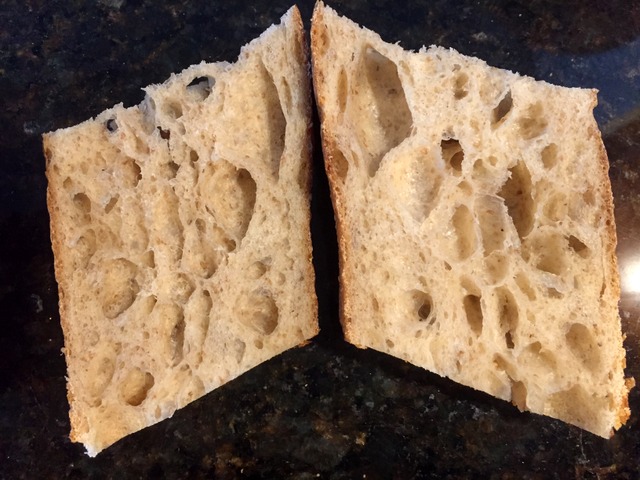 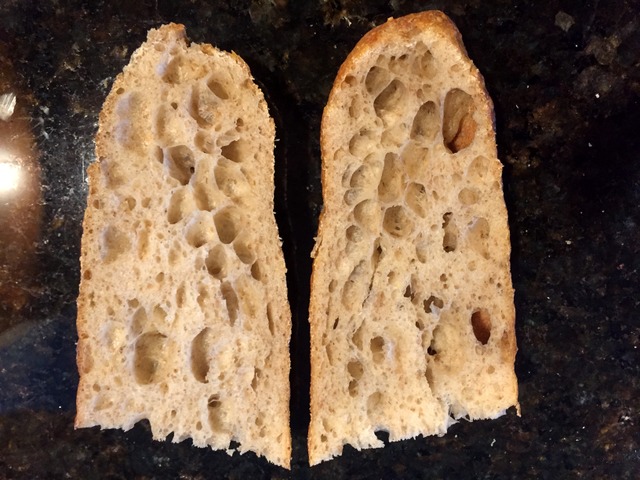 And I agree that with higher hydration doughs, especially white flours, a bassinage of ~10-15% of the water should be held back until the final mix.

How does a bassinage work - I've never done that before.

I feed the starter later at night - 11PM.

3-4 hours later, when the starter passes the float test - add the starter and salt to the dough, do a final mix (I've been using the Rubaud technique Trevor Wilson likes)

Proceed with stretch and folds every 30 mins/hour, depending on how dough is developing, until bulk ferment is ready (4-5 hours). Then turn it out onto the counter.

It sounds like the group is recommending a shorter bulk and a shorter autolyse. I have been using the longer autolyse because I like the way the gluten comes together, which makes the final mix much easier.

If I am doing a shorter bulk to increase extensibility, should I also be stretching an folding less so that the dough doesn't tighten up too much, creating a tighter crumb?

Anywhere between 20 minutes to 2 hours is sufficient for autolyse - unless you are placing it into retard for an overnight or very long stay.

Higher hydration doughs can take more stretch and folds,  Just be careful o not degas the dough too much or tear the gluten strands during these S&Fs.

for what you want.  Check this out: http://www.breadwerx.com/how-to-get-open-crumb-from-stiff-dough-video/

David, I think your question is a good one. You said that high protein flour makes for strong gluten. And the strong gluten keeps the gas from escaping. That is true. But think about this. Because the gluten membrane is so strong, the CO2 gas has to develop more pressure to inflate the aveoli (holes). a good example might be 2 different balloons. One balloon has a very thick skin (high gluten) and the other has a thin skin (AP Flour). The balloon with the thicker skin will be much harder to blow up than the thinner one. So, AP flour is often used for crumb that is very open and contains large holes.

I’ve thought about this a lot lately. For extreme open crumb you want your gluten to be strong enough to contain all of the gas, but at the same time weak enough to allow those gasses to easily expand. I think it is a fine balancing act.

Trevor Wilson (www.breadwerx.com) is know for his open crumb. He is an advocate of long autolyse or premix. I think he uses various autolyse/premix methods to refine the delicate balance mentioned above. I and a whole bunch of others on this site that are seeking open crumb, consider Trevor’s book, “Open Crumb Mastery”, a sort of bible on the subject. Here is a link to the down loadable pdf file. https://trevorjwilson.selz.com/item/open-crumb-mastery-for-the-intermediate-sourdough-baker-1-1

So maybe you do have an excellent flour for the goal mentioned :-)

OH. The AP flour designation in the states varies greatly. King Arthur’s AP flour might be another companie’s Bread flour. The make up and the protein are all over the place. What brand of AP flour are you using?

That is a good thing to keep in mind - keeping the gluten network a bit weaker so that it can be inflated easily. If the network is stronger, could you do a longer bulk ferment to allow the gluten to inflate more?

I'm not sure if i'm necessarily looking for an extreme open crumb (although it would be nice to see). I'm mainly looking to improve my technique and create a bread that is lighter and more open throughout. I've made a couple loaves before that had some bigger bubbles interspersed with a closed crumb in between - that was a gummy and not ideal.

I have ready Trevor's book, that's part of what took me down this road of thinking of each element more critically.

I'm using King Arthur Sir Galahad flour (11.7% protein). I was able to get a good deal on a 50lb bag at an Amish grocery store near where I live. I can't remember the brand of the whole wheat flour I use - I moved it to a couple plastic buckets.

Also, the size of the dough has an affect on the crumb. Smaller loaves make (relatively) open crumb easier to obtain. For an experiment, try baking a 100g loaf. IMO, 500g makes a decent size loaf and facilitates open crumb.

I had not seen this topic yet, Kat called my attention to it, I will definitely follow because I usually only have access to weaker flours. This weekend I did a test based on information from Matteo's book that Kat quoted here as well. My results posted here: http://www.thefreshloaf.com/node/57279/100-white-weak-flour

I'm curious now to know what it would be like if I had used a higher % of levain. I will do this test soon.

Feedback needed - sourdough loaf
My Foolproof Step by Step Recipe
Large Bubbles, Just Underneath the Crust
Deflating on the scored side
What is a seed starter?
END_OF_DOCUMENT_TOKEN_TO_BE_REPLACED