Today's sourdough bread is a continuation of the experiment from last week with my modified steaming method of pouring hot water over pre-heated lava rocks in a cast iron skillet both before and after loading the loaves in the oven.

I had two new goals: In addition to trying to replicate last weeks good results, I wanted to increase the sourness of the bread and I wanted to see if I could get a “crackly” crust.

In the interest of increased sourness, I elaborated a firmer levain than what I customarily use. I fed the levain two days before mixing the dough, fermented it overnight and then refrigerated it for 18 hours. I also doubled the percentage of the levain in the formula.

I have read that lower protein flour will produce a more crackly crust, while higher protein flour produces a more crunchy, harder crust. Therefore, I used AP flour (11.7% protein) rather than the high-gluten flour (14.2% protein) I had used last week.

Since I was using a lower protein flour, I reduced the hydration of the dough to 70%. Note that the effective hydration is even a bit lower, since the levain was less hydrated also. I used the same procedures as last week except I baked the loaves slightly longer, since they were slightly larger (because of the additional levain). 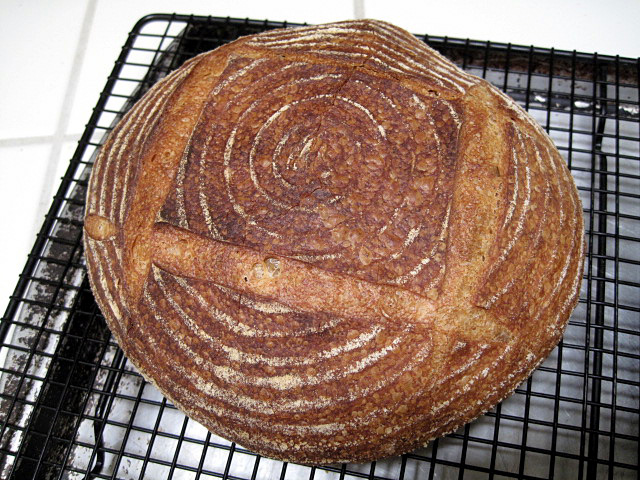 I autolysed the flours and water for about 30 minutes. I then added the levain and salt and mixed with the paddle in my KitchenAid for about 2 minutes. As I was switching to the dough hook, I was surprised how much gluten development had already occurred. I mixed with dough with the dough hook at Speed 2 for just a couple minutes more and already had moderate gluten development.

To what could I attribute this? The only possibilities were the increased percentage of levain and the different flour. My hypothesis is it was mostly the flour. We hear that higher-gluten flours require more mixing to develop the gluten. I was using a lower gluten flour than usual for this type of bread.

The dough consistency (Thank you, MC for this useful distinction from the SFBI!) was almost identical to that of last week's dough, so my guesstimated hydration adjustment seemed spot on.

These boules were proofed for a bit over an hour before they were refrigerated. The next morning, they sat at room temperature for about 2 hours before baking. When I transferred them to the peel, they spread some. This could be because of the lower gluten flour effects, slight over-proofing or a combination of factors.

The loaves had reasonable but not great oven spring, and they had less bloom than the previous bake. This suggests they were probably over-proofed a bit. I baked them for 22 minutes at 460F. They then sat in the turned off oven for 7 minutes to dry the crust.

The crust was not as shiny as the last ones, but by no means “dull.” They were singing already when I took them out of the oven. It seemed to me, that the “tune” was higher pitched than the song my boules generally sing. Could this be because of the lower gluten flour? Thinner crust? And … Woohoo! Cracks began to appear in the crust as the bread cooled!

The crust has a crunchy bite. As can be seen from the crumb shot, below, it is relatively thick. I think that, to get a thin  crackly crust like a classic baguette, one must have a shorter bake at a lower temperature.

The crumb appearance was typical for my sourdoughs of this type. However, it was chewier than I expected. Very nice. The flavor was indeed more sour than last week's sourdough, as expected. I would still categorize it as mild to moderate sourness. It is not as sour as the "San Francisco Sourdough" in Reinhart's "Crust and Crumb," which uses an extremely firm levain in even higher proportions. 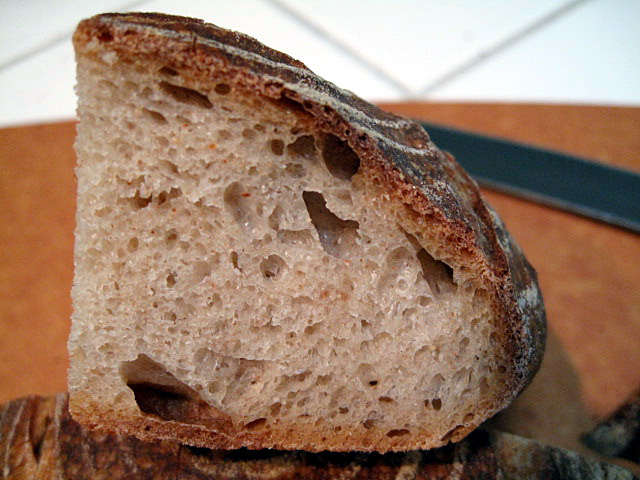 David- That's a beautiful looking crust you achieved.  I can see the crackling that our friend Shiao-Ping achieves in so many of her breads, and also the dimpled surface that indicates the period of refrigeration.

I baked two fougasse this weekend using lava rocks, and got a much nicer looking crust than previously.  The second time I soaked the rocks in water for nearly an hour before draining them and then loading them into my skillet as I began pre-heating the oven.  Couldn't detect any difference from just pouring hot water over the dry lava rocks.

Tomorrow I'll try my poolish baguette and see if I there's a noticeable difference in my gringes.

But that is a very enticing crust I must say!

Both for the kind words and your experience with steaming.

From today's experience, I would say that the double steaming is relatively convenient and more effective than what I was using previously. However, steaming is only one of the determinants of oven spring and bloom.

The most significant pitfalls for me in getting baguettes' cuts to open the way I'd like have been getting the proofing exactly right (neither under- or over-) and getting the quantity of steam just right.

Bonne chance! I look forward to seeing and hearing about how your baguettes turn out.

Just Gorgeous, David!  Your experiment was a great success!  Nice write-up too! I would love to have a bite of this loaf!

I still learn something every time I bake, but these intentional experiments are a way of testing whether what I think I've learned is really true. And I enjoy eating my data.

I can't believe you get such wonderful color. I think you said baking time was 22 minutes but with the initial steam time it's really 32 if I understand your text. Still, great color.

Thanks for the paper data David, go ahead and shred the balance of the data with a knife so it doesn't fall into the wrong hands.

The bake time was 22 minutes (12 with steam + 20 without steam). Then, 7 minutes more with the oven turned off and the door ajar.

I hope that clarifies the timing.

As you know, I eat my data. Hmmm ... Leftovers do get made into breadcrumbs or croutons sometimes. I guess that's like shredding. For breadcrumbs, I find a Cuisinart works better than a knife.

Now you've got me thinking. I wonder how the Cuisinart would work on old papers. I'll tell my wife you suggested it. ;-)

Hey, David, as I understand it, you get a more sour flavor from a starter that has matured at a lower temperature. Have you tried that? I haven't, because at our house, we like it mild...

The levain was refrigerated overnight.

And congrats on a mighty wonderful bread!

I think what Patricia was referring to above, was whether you've tried to let the sourdough ripen at lower temperatures? It seems that acetic components of the sourdough thrive best in firm sourdoughs and at lower temperatures compared to the lactic. I guess if it's refrigerated, then much activity will cease right away, and the acetic part won't dominate as much as if e.g. it had ripened at cold room temp (65F - 70F).

Another thing to think about re: retarding in bulk vs. retarding the shaped loaves, is that it takes longer to chill the dough in bulk compared to the shaped loaves. So one could infer that more activity takes place during retardation when it's done in the bulk stage compared to during final proof. One would think that a loaf that's been retarded in bulk has a greater potential for increased sour than one that's retarded during final proof. Just something one could consider, but since we're not really experiencing much difference one way or the other, convenience should decide.

Be that as it may, you raise an interesting question regarding the effects on LB acid production. In the Summer, there is no environment available to me in the 65-70F range. I've thought about getting a small refrigerator just for retarding dough at 50F, which is about what the pros use, I believe. Hmmm --- I do have some small ice chests I could use for the levain or the dough. Maybe a future experiment.

To me a crackly crust is definitely desirable and the mark of a superior loaf. Nicely done!