A personal Ciabatta throwdown, and the questions that followed

A personal Ciabatta throwdown, and the questions that followed

Hello all. I started baking bread for the first time last year when I got ABI5MAD for the holidays. I worked on that for a good chunk of the year and finally started wanting to branch out into more traditional recipes. I have made several different recipes for bagels, including Hamelmans, PRs, and I have to admit, my NY grandfathers recipe is the best, dense chewy etc. I also recently made the buttermilk clusters from this site. Which turned out great. So now I have been wanting to experiment with more traditional recipes. I decided to make some ciabatta. I made Jason's Quick Ciabatta which I found at this site and the next day I made the Poolish version of PRs ciabatta from BBA. Without a doubt, Jason's version came out better. Better, crumb structure, moist and shiny irregular holes. PRs version tasted fine, but had a dense crumb, almost like a flat, softer crusted french bread. I followed the recipes exactly, weighed my ingredients, and as far as I can tell, handled the doughs similarly. Jason's version is a higher hydration, and was a much more slack dough, a bit difficult to work with, but worth it. I actually added a few extra TBS of water to the PR version to loosen it up.

Any thoughts on what I could be doing wrong with the PR version? Over ferment? Under ferment. As I mentioned I am fairly new to artisan breads and I don't have the best understanding of the science yet, but I am excited to learn.

Thanks for the site, and all of the knowledge that is shared here. It is indispensible to a new baker. 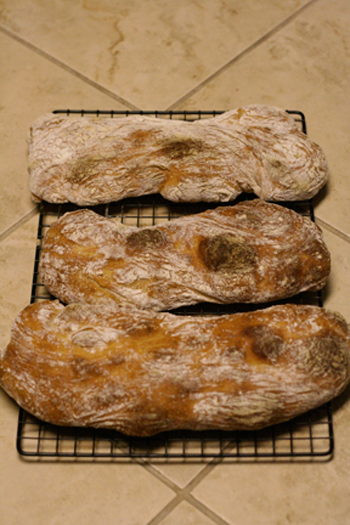 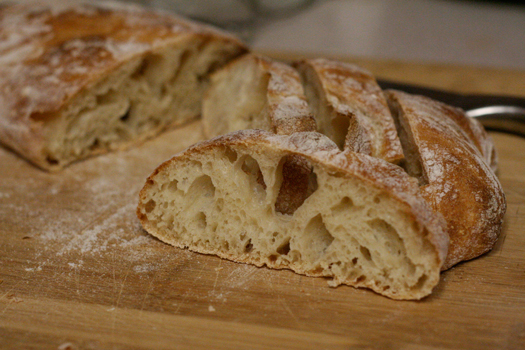 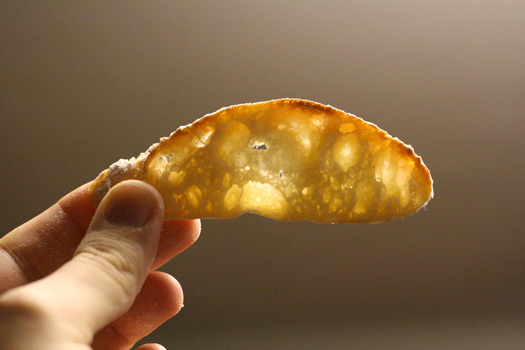 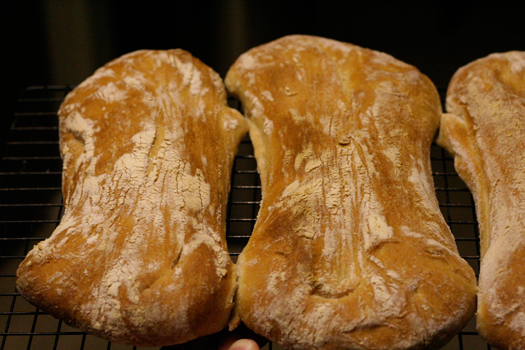 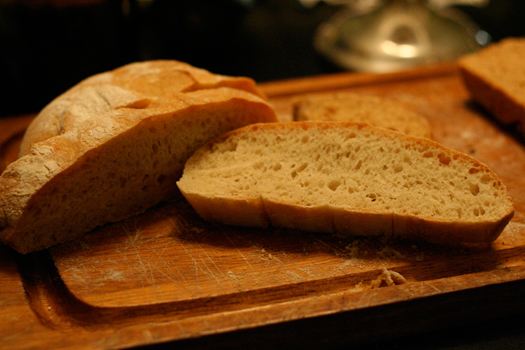 Any input would be appreciated.

Ethan, welcome to TFL!  I have never baked ciabatta (although it's on my to-do list), but I can say yours look amazing!  Especially the first batch.

I do have a question for you, though.  Would you be willing to post your grandfather's bagel recipe?  I have been baking the BBA bagels and have been quite pleased with them.  But I'd love to try another recipe.  So if you are willing and able to post them. I'd appreciate it.

I can't offer much other than to say that the three times I've tried the BBA Ciabatta recipe, I wound up with very similar results to yours.  I gave up on it and have been trying other things.  This weekend I was going to give this one a try:

Hope this helps - at least in confirming that BBA might be the wrong source for Ciabatta.

(And yes, an excellent bagel recipe would be much appreciated.)

I made ciabatta a couple times with a recipe off epicurious (I think it was from gourmet) and got results kind of like your second set. My impression was that 1. the dough was not wet enough for true ciabatta, and 2. That I was not letting the biga ferment long enough on the front end.

Thanks for the feedback so far. The only thing I can think of is that given the cool temp of my house the evening I made the Poolish, I didn't let it ferment long enough, but it was starting to bubble, and PR says to immediately refridgerate after it bubbles, so...? I really enjoyed Jason's quick version, but just wondering what could have happened given that I assume BBA to be such a definitive source.

Part of the reason I requested input was that I was planning to start the Pain L'Ancienne from BBA today and wanted any thoughts that might be helpfule before that undertaking.

I will post the bagel recipe when I have it in front of me, but I warn, it's volume measure and a bit more of a story than a recipe. It is taken from the context of a letter he wrote to my mother so it is a bit conversation which is what I love about it.

I regularly bake the Ancienne baguettes (my kids' favorite).  Be certain your water temperature is 40F.  A couple degrees colder doesn't hurt anything.   I put my mixer bowl in my back porch to chill it before I start. My flour is kept in a cold pantry.  I premeasure the water and keep it outdoors until ready to add it (I live in a snow belt).

Put a piece of tape on the outside of your container to mark the top of your dough, then get it the cooler a.s.a.p.

When you bring out the dough the next day, wait until it has doubled before gently moving it to a well floured surface.  In my warm, wood-heated home  that takes at least three hours.  I've found I get a much more open crumb that way.

If you used the full 24 ounces of water, you will be working with a pretty wet dough. Don't expect to do any shaping.  Just cut, lift, and stretch the baguettes to a sheet of parchment.  Scoring is next to impossible unless you use scissors - but it's really not necessary.  The recipe produces six baguettes.  You'll need two sheets of parchment unless you have a very large oven and can bake all six at once.

Have fun and enjoy - they are quite tasty!

Ethan, that sounds like a wonderful recipe full of good feelings for you.  I would love it if you could post it, including the conversational parts.

I made a variation of Jason's quick ciabotta recently for the first time and it turned out fabulous.It was from this Forum and it was actually "John's Quick Ciabotta Substitute" and it is about 3/4 down the list of replies to the original post:

A few important points he mentioned was the length of time beating,the characteristics of the desired dough and the fact that it MUST triple. My dough was a gelatinous glob of bubbles encased in the slimy dough prior to baking. Best description I could come up with and very unappetizing but,Holy Cow, what a bread! Every particle of flour must have been surrounded by water.Totally different from any loaf I had ever made.I am no expert and this was my first foray in to high saturation doughs, but perhaps my inexperienced observations along with your expertise can provide a useful thought.

Your second loaf does not appear to have the supersaturated look of the first dough. It looked as if there was unsaturated flour in the dough which created a drier crumb. Did it have any unique characterisitics as a raw dough? Did the recipe require the extended beating?

It may be just me, but I haven't managed to achieve airy crumb with big holes from any of ciabatta, baguette or focaccia recipe from PR's book. (I have BBA and Artisan Breads Every Day) They always come out with finer and softer crumb with  small and regular holes than my liking for those kinds of breads. Thjey are almost like crumb for ordinary loaf but in shape of ciabatta, baguette or focaccia....if you look from distance. :P  Maybe that's how he likes his bread?  Or is is just me?? I don't know....

If you haven't had good luck getting open structure with ciabatta, try a no-knead variation.  It doesn't get much simpler, has minimal cleanup, and results in a fantastic open crumb with great flavor because of the long ferment.  I've tried lots of different ciabatta recipes and found they had a lot of fuss, and sometimes not great results.  For what it's worth, I also got dense ciabatta from PR's recipe, though the Team USA ciabatta came out better.  Check out the no-knead recipe I worked up and see if you get better results.  Happy baking!

But actually I've been reasonably successful with many other ciabatta recipes I've tried and I know no-knead+long fermentation method which I have  tried several times a few years ago. (I've been baking since I was ten....and that's about a zillion years ago. :P)

It's only PR's recipes, not only ciabatta but also other breads like baguette, focaccia, etc. etc. that's supposed to have largish, irregular holes, that I've never been very happy with. They always come out with softer crumb with more regular, small holes than my liking, so I've been wondering if that's how he actually prefered.

Just looked at this post because I have been trying PR's ciabatta bread recipe and also have not been getting the same crumb that is in the pictures of BBA. I was thinking I was doing something wrong because I am new to bread baking. At least now I know it's not me. Has anyone found out if there is an error in the recipe? I am trying it again but next time I think I will try Jason's Quick Ciabatta recipe