For my second bake from Richard Bertinet's 'Crust' I wanted to try something with ingredients I've never used before. The recipe that caught my eye was his Breton Bread as it calls for sel-gris and buckwheat flour, neither of which I've had any experience with. For anyone not familiar with sel-gris, it's an unrefined sea salt from Brittany that's very course and gray coloured. It's flavour is a little sharp at first, but leaves a subtle aftertaste of minerals that's quite pleasant. I think I'll be using it in my future baking quite a bit, particularly for rustic breads. For more info on this salt and others, here's a link to a guide of the various types of salt available for cooking and baking.

Buckwheat pancakes are my only previous experience with this grain, having had them when I was a kid at Scout camp, but never using it professionally or at home for any baking. Some of the breads I've seen since joining TFL that use buckwheat, spelt, kamut etc. have intrigued me enough that I felt I needed to branch out more and discover some new territory. Our friend Khalid, in particular, has been a great inspiration to me with all the beautiful grain breads that he's made over the last few months.

Bertinet's formula for Breton Bread calls for using a pate fermentee as well as bakers yeast as it's leaveners but I thought I'd like to do it using a rye levain instead. Reason being, I had my rye sour going great guns, tripling in volume every 5-6 hours or so and thought it'd be a waste to not use it while it was so active. Late in the afternoon the day before mixing, I made the stiff levain but using rye starter as my base . By next morning the levain had doubled and domed so I went ahead and mixed all the other ingredients in the formula, adding the levain in chunks during the last part of the mix. Because the sel-gris is quite course, Bertinet advises dissolving it in a portion of the overall hydration, which is 69.8% (not counting the stiff levain).The dough was mixed on low speed for 8-9 minutes, then on 2nd for five. The dough came off the hook somewhat sticky but uniform and then was worked for about 5 minutes till it came clean off the counter. It rested for 1hr. at 73F, then stretched and folded and given another hour and another fold. After 30 minutes more of rest I molded it into a boule and put it into a heavily floured banneton, covered it with linen and put it in the fridge to rise. Four and half hours and 18 holes of golf later the loaf went into a 500F oven for 8 minutes with normal steam, then reduced to 440 for the remaining bake of 22 minutes. The loaf seems a bit over proofed to me but compared to the photos of it in the book it's quite a bit higher. It opened up much more along the slashes than I thought it would since it was a nice tight boule before going in the oven, so I'm wondering if this is perhaps a possible effect of the buckwheat flour content which was at 26%. I wouldn't call it a disaster by any means as the flavour of this bread more than compensates for any proofing or slashing errors on my part, but maybe next time I'll just give it a 9 hole proofing time. This is a really tasty bread, full of big flavours and aroma, the rye sour just adding another layer of flavour to it. My colleagues at the bake shop, who also serve as my tasting panel, all agreed that it was one of the more flavourful ones I've brought in for them to try. A few photos of it below. Please excuse the picture quality. My wife is visiting relatives back east and she decided to take the camera with her... for some reason, so I had to use my cell phone cam. 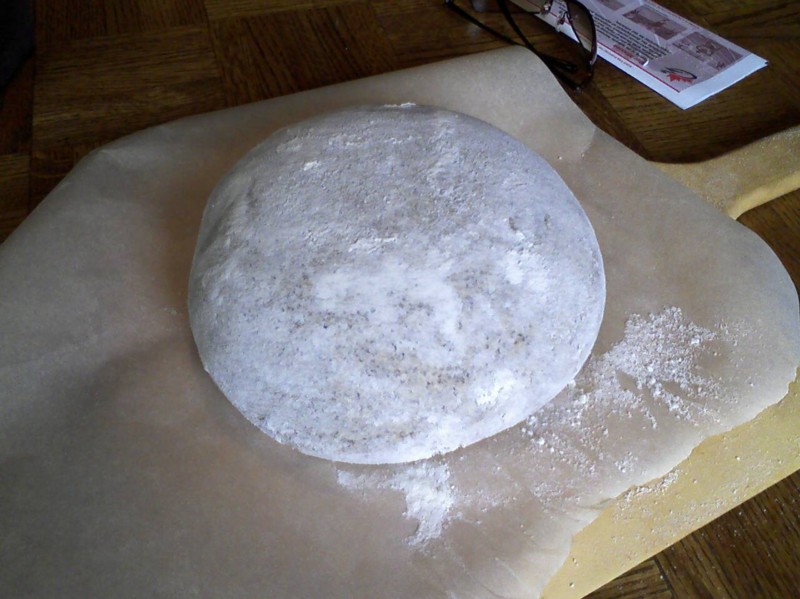 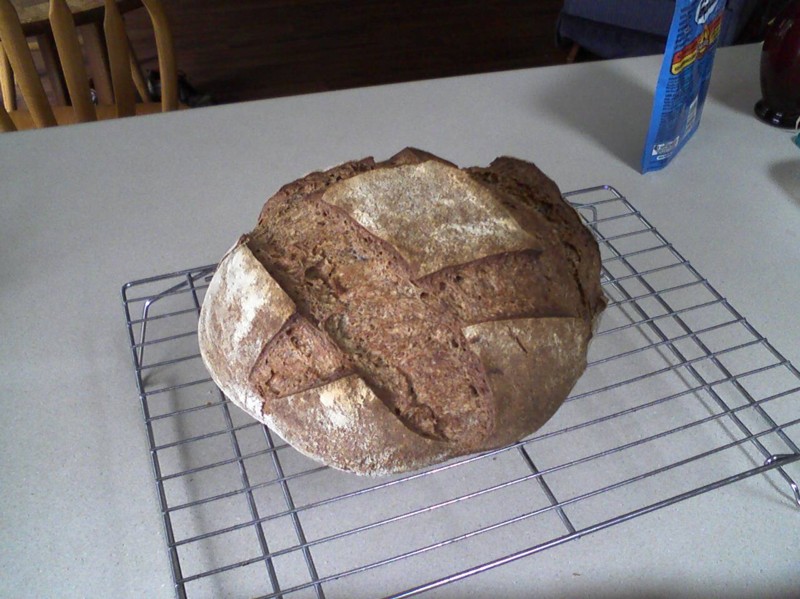 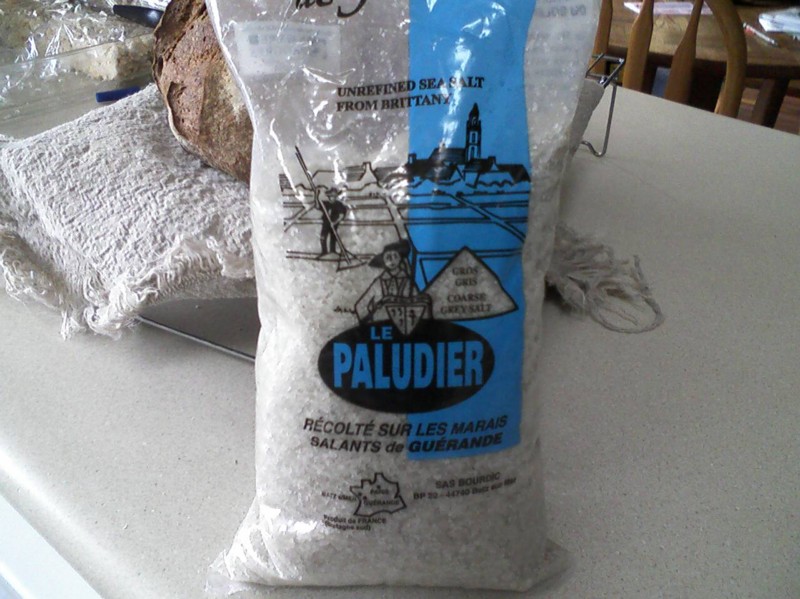 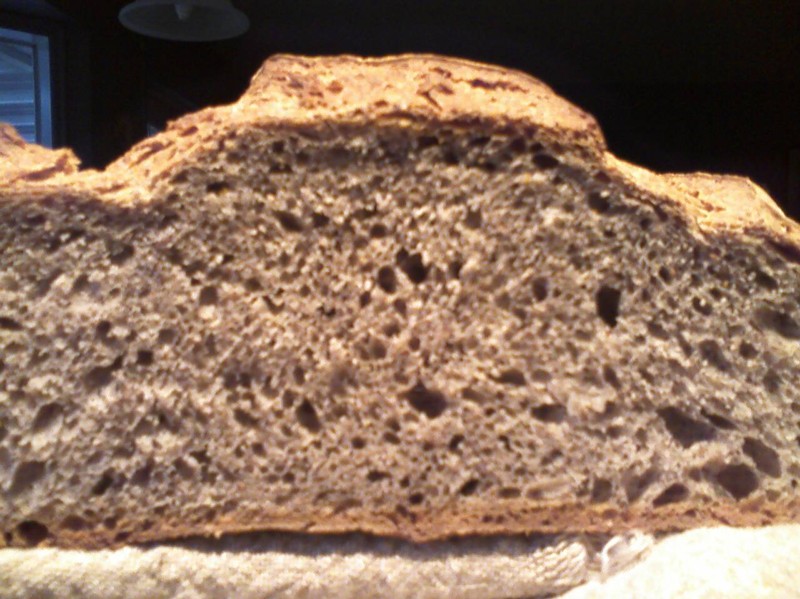 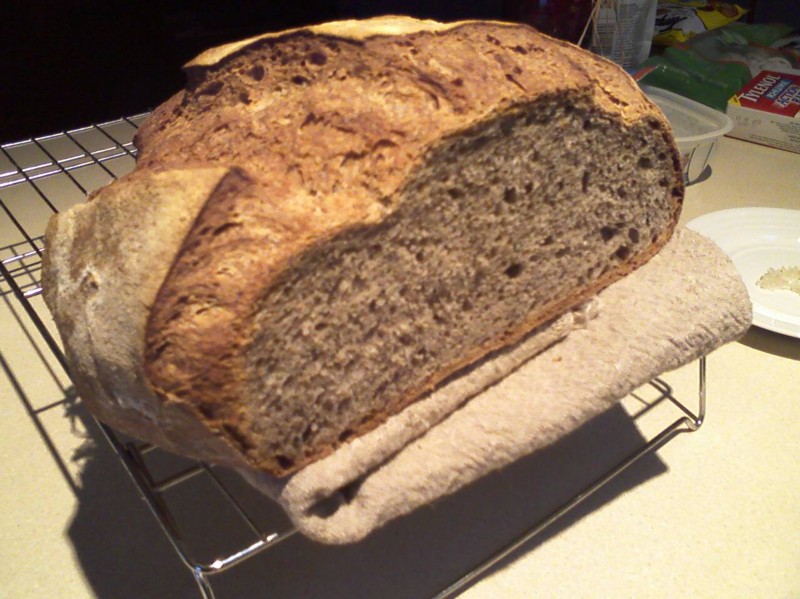 This past Sunday I was in the book store browsing...where else.. but through the cooking section. One of the books that interested me the most was Richard Bertinet's 'Crust', in particular for some of the unique recipes in it. It also included a DVD of Bertinet demonstrating his techniques for hand mixing and kneading brioche and levain. The book has some very good photography as well and the price was reasonable so I went for it. Mr. Bertinet has been mentioned a fair bit lately on TFL so I was curious to see what I could learn from him. While the book is not particularly technical, primarily being meant for an advanced home baker I think, his methods are that of an expert baker who has a clear and easy style of explaining a formula or procedure.

When I mentioned in a thread on Sunday http://www.thefreshloaf.com/node/19547/richard-bertinet-wins-major-uk-award that I'd picked up the book a couple of members replied mentioning that they had it as well and thought it was a good one to have, although they both thought the hydration for his Ciabatta formula was too low. I looked at it and didn't think it seemed out of range but decided to try it for myself and see. Now normally I'm not a real stickler for being exact when it comes to scaling water, but going more for the feel of the dough as described by the author or any included photos. This time though I weighed out all the ingredients right to the specified gram and followed his times and oven temps fairly close as well. Of the half dozen or so ciabattas I've made over the last eight months I think this is one of the better ones. It may be partially due to having used a lower protein flour (10%) for this one than I have in the past or maybe because I spent more time developing it by hand than I normally do, but whatever the reason it made a good loaf. The crust is fairly thin and splintery and the crumb while being a bit more open than I prefer, has a good chew to it for an all white bread. The flavour is just what I expect a ciabatta to taste like, wheaty, toasty, with a bit of richness from the extra virgin olive oil coming through. Very tasty! 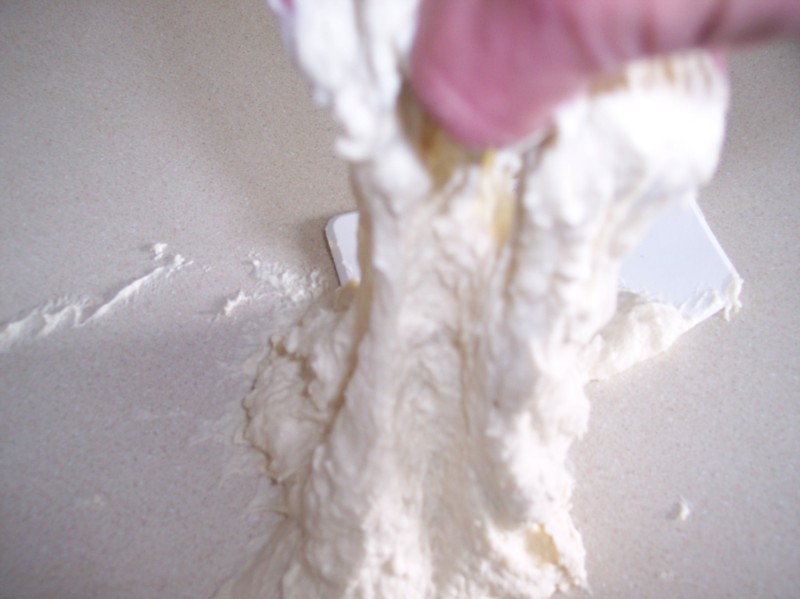 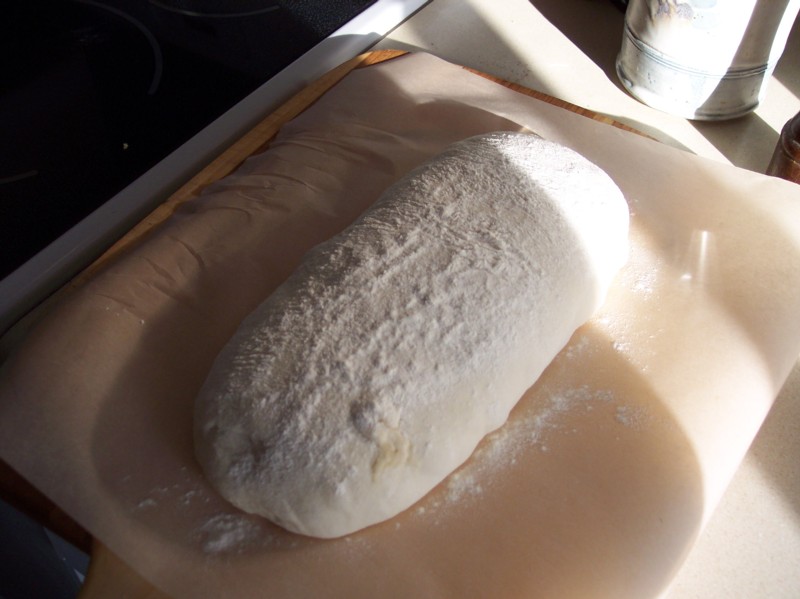 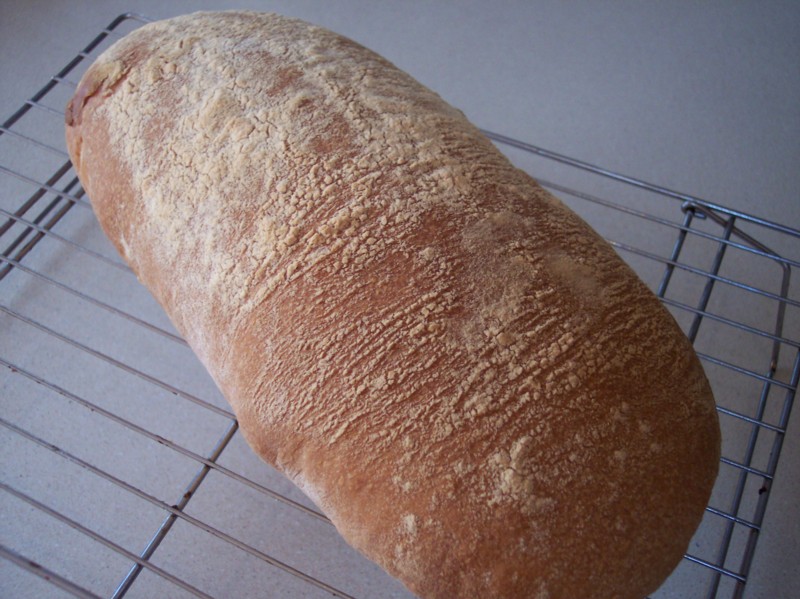 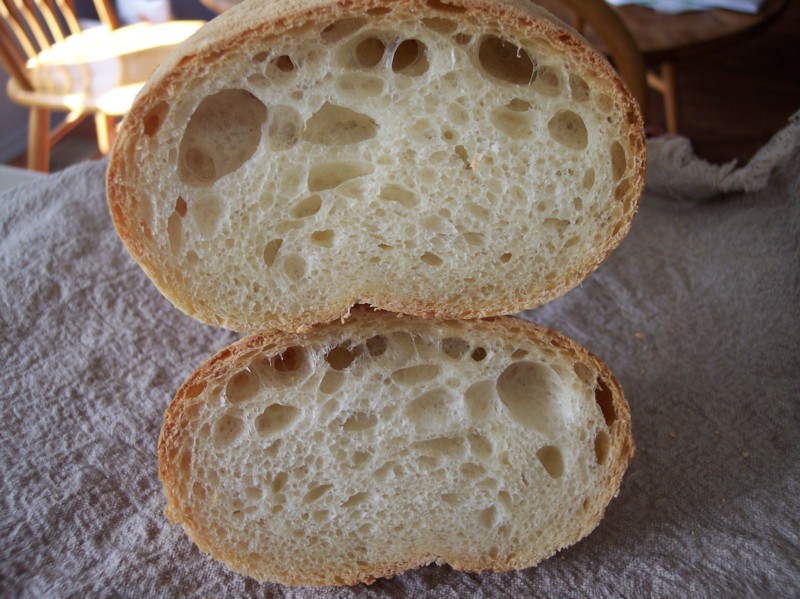 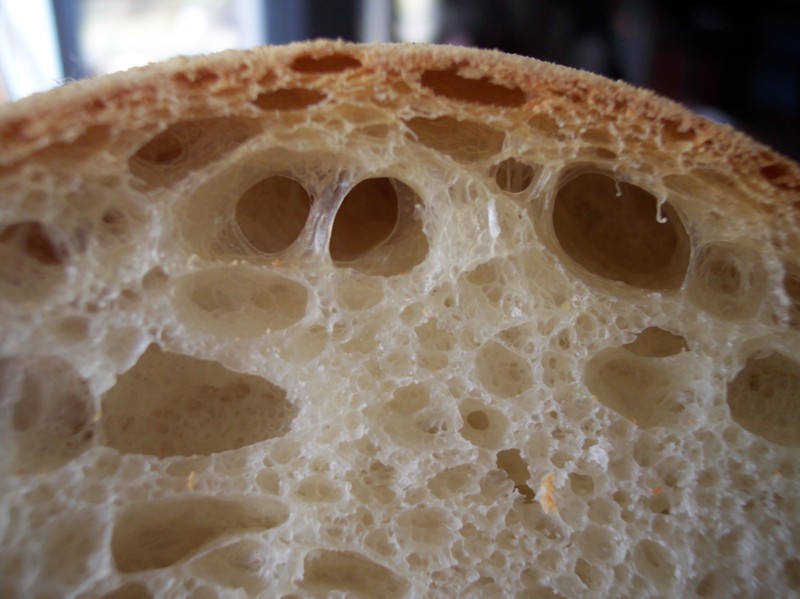