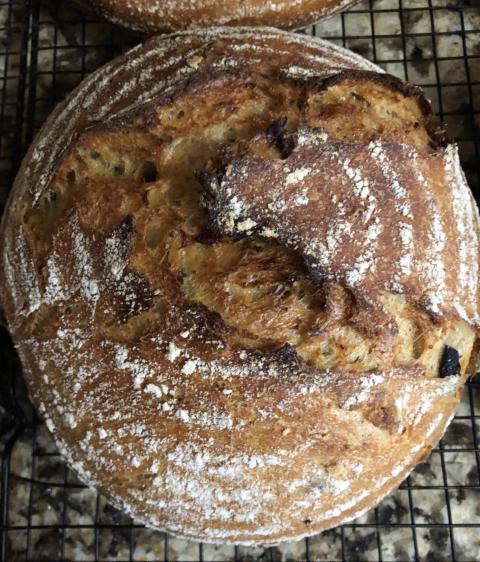 One of my customers requested a savory loaf with feta and olives so I made a repeat of this one but by using James (Ciabbata)’s method. I was going to try to dump all the add-ins at the beginning but I had second thoughts because of the oily  nature of the extras. Then I decided that I could add the extras while laminating the dough which is something I’ve never done (the lamination). Experimentation is good, right? So here goes…

16 g of oil from the sun-dried tomatoes

The oven spring isn’t what I hoped for. They aren’t completely flat but then again, there is a fair amount of add-ins to weigh the dough down in this particular recipe. unusual add ins for sure and lots if the:-)  The flatness should be made up with additional flavor!  Should look different since feta doesn't melt!  I like the darker loaves the best1

Lighter when I bake them the same amount of time as the others. I’ll have to keep track of which ingredients might cause that although I know anything with any sugar will cause a darker crust but some do go dark even without honey in them

They sound like they will be delicious Danni.  How did you like using a lamination to add the inclusions?  I really enjoy doing it this way, Hopefully you will see how well it helps evenly distribute the inclusions.

That ended up with an awful lot of the add-ins. It was just the one batch thank goodness. It is definitely an interesting way to develop the gluten. I’m not sure that I’m going to continue though as I’m going to go back to doing a true autolyse and then adding the salt, yogurt and levain in the mixer. I might as well put the add-in at the end of that as well. Less of a mess.