I like to put seeds on many of my breads, and you need a wash to stick them to the dough. Egg white is standard. But what if I don't have any eggs? Water doesn't work. I tried brushing on corn syrup, which actually works very nicely, except after the bread is baked, it absorbs water out of the air and gets a little sticky. Ideas?

That's a nice idea. Thank you. I've used that for shiny surfaces, but I guess if it is thick enough it can act like glue.

As far as I know, it should hold on to the seeds at the same concentration used for a regular shine.  So try it with your normal concentration/thickness first. No guarantees, but it's worth a shot.

You need about 1/2 a teaspoon of cornflour into 1/2 to 1 cup of water and ring to the boil  to make your paste. Allow to cool and apply to the dough surface with a paint brush, it will keep seed stuck to the surface it also protects the dough skin from setting  to quickly when going into the oven, even better if you are able to generate some steam too it also  allows a better oven spring it also gives a good sheen to the loaf tops.

Your bread? Then sprinkle the seeds in the banneton before putting your loaf in there to proof. I don’t add anything to make them stick. The weight of the dough takes care of it.

Apply the seeds after shaping. I roll the shaped dough on a damp towel and then in a tray of seeds. The dough is then proofed in a linen couche. 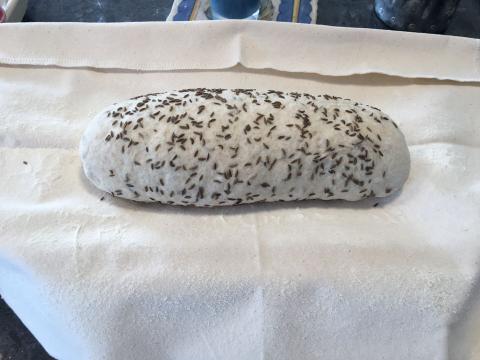 OK, I tried the corn starch glaze on my French-like breads with sesame and poppy seeds. It works beautifully. Thank you! This way, I don't need eggs, and don't have random egg yolks bouncing around. For those who want a really shiny crust, the recommendation is to brush twice. So I would do that once before baking, under the seeds, and once during baking, over the seeds. I brushed twice on halves of my loaves, and the seeds stuck very slightly better on the double-brushed sides, but not really significantly so.

Rolling the moistened loaves in seeds seems like a lot of work, end especially because I want to seed them once they have mostly risen, that's not a good strategy, for me at least. I want GLUE.

With respect to corn flour, be aware that in the U.S. corn flour and cornstarch are two very different things. The former has all the germ and hull ground up in it, which doesn't contribute to stickiness. Who keeps corn flour around anyway? Masa harina isn't corn flour. Note that in the UK, I believe, corn flour is what they call what we call cornstarch. So one has to be careful about definitions.

Here's the way I have found to handle my...
Converting Whole Wheat Starter to Bread Flour
Tartine Bread vs Flour, Water, Salt, Yeast
My oven's giving me trouble..will shut down...
Link to Science of Sourdough webinar from...
END_OF_DOCUMENT_TOKEN_TO_BE_REPLACED