I've been a frequent (obsessive?) reader of TFL since finding it a few months ago and have learned a lot from mining the trove of posts and many topics.  What a resource, and a great community as well.  I've been holding off from posting because of an idea that once I perfect my family-favorite bread formula and methods, it would be a good start at contributing back.  Well, that bread is a work in progress so why wait any longer?

I'm a molecular biologist/genetic engineer working in the pharma industry.  I've dabbled in bread baking on and off over the decades, mostly using a bread machine early on.  Now with two children, I was inspired by the much-loved book The Seven Silly Eaters by Mary Ann Hoberman, which features a character who would only eat "soft and squishy homemade bread."  We wanted our own soft and squishy homemade bread.  A recipe from King Arthur Flour, Vermont whole wheat oatmeal honey bread fit the bill and became a family tradition for the past several years, though I've tinkered with every bake.  We like it sweet and buttery.

Lately I've been alternating between our family bread (we just call it "soft and squishy") and sourdough.  I always use 50% or more whole grain content and bake everything as pan loaves.  One of us is somewhat dairy-intolerant, so no milk as in many sandwich loaf recipes.  Recently I've done a lot of experimentation with formula ratios, preferments, tang zhong, milling dry wheat berries in a Cleanblend blender (similar to Vitamix), and sprouting.  Some of these experiments have yielded bricks, but even those were tasty and didn't go to waste.  I think I’m giving up on the blender flour, by the way—even sifting out the coarser bits for a hot soaker has yielded mostly poor results. The best yet has been 45% sprouted hard red winter wheat, ground in the meat grinder attachment of a KitchenAid mixer or in a food processor, with 10% oats.  I'd like to share this formula.  Though I'm far from done tweaking it, this bake had an especially great flavor.

I came up with it in an experiment comparing King Arthur whole wheat flour, freshly milled hard red winter wheat blender flour, and wet-ground sprouted hard red winter wheat.  I scaled for three 1 kg loaves in pans, made a biga from all-purpose flour (pre-fermented 30% of total grain, 57% hydration, 0.25% yeast, 4 hours at room temp and then refrigerated overnight), a hot soaker of the rolled oats (200% hydration), and a pre-mix of everything else except for the whole wheat and yeast.  I autolysed separately (83% hydration) in the refrigerator overnight King Arthur whole wheat flour, hard red winter wheat blender flour, and wet-ground sprouted hard red winter wheat (Central Milling, from bulk bins at Whole Foods Market).  The hydration for the sprouted wheat was based on the weights before and after sprouting (60% after grinding, then raised to 83% with extra water).  On bake day, I combined the autolysed whole wheat portions with thirds of biga, soaker, premix, and the remaining yeast.  I mixed with a dough hook in the stand mixer for about 6 minutes total, gave bulk fermentation 2 hours with 3 sets of stretch and folds, then shaped as wet, loose loaves into buttered nonstick 8x5" pans and let rise until cresting pans.  Note: in the table below, whole wheat flour is a place-holder for the total whole wheat content in three portions. 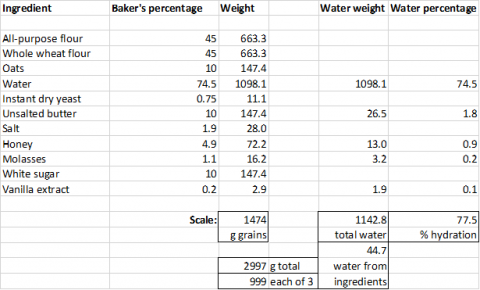 Preheated gas oven to 425 deg F, lowered to 350 deg, baked 20 min, covered with foil and baked 20 min more.  On the left in the pictures below is using WWF (rice flour sprinkled to distinguish), middle from blender flour, sprouted wheat mash on the right: 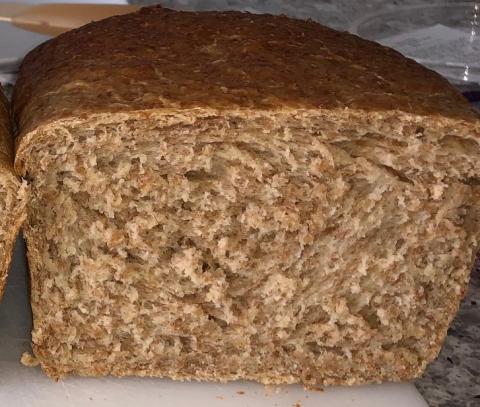 The blender flour loaf baked fine but got a bit smooshed when removing from its pan.  All three had a tender, moist crumb.  The left two had the familiar taste of this formula, but the sprouted wheat loaf knocked our socks off.  As others have said about sprouted wheat, I find I can't describe what the difference in flavor is, but it was without a doubt my best bake to date.

Since then I bought 25 lbs of hard white wheat berries and I've been trying that out, as well as seeing how far I can reduce the APF and maximize the sprouted wheat.  To be continued.

Welcome, and congrats on your first post. GREAT looking bread there. And good photography.

I followed most of your narrative, but I got lost in a few of your verbal shortcut descriptions in your formula.

Bakers (and cooks in general) are by nature a detail-oriented bunch, so don't be afraid to go into full "anal-retentive engineer mode", bullet points and all, repeating subject/object (ie, avoiding pronouns and assumed antecedents) when needed for clarity.

Most of the audience here is relatively new to bread baking, and silent as far as commenting.  I generally try to write for the beginning baker, and not just for those who openly comment or make original posts.

Did you follow the recent "community bake" of the "approachable loaf" of 75% minimum WW?  What you are doing sounds close to that.

I am a fan of white wheat berries also, having gone through many pounds of Prairie Gold, hard white spring wheat, from Wheat Montana.

You may find that with white (as opposed to red) wheat berries, you will need less sweeteners to compensate for the bitter tanins of red wheat.  And, using white wheat berries will allow you to increase the WW percentage of the total flour amount. At least that is my experience.

I use a Vitamix blender to mill.  But I first run the berries through a hand-cranked 3-roller grain cracker.  that saves wear and tear on the blender, allowing me to blend/mill 225 grams (1/2 pound)  of cracked wheat with just 30 seconds of blender-on time.  (i divide my batch into 225 gram sub batches.)  I use a regular Vitamix container with regular blades, not the special  "dry grain" container.

Thanks for the welcome and feedback!

So I'm not the only one using a blender to mill.  Cracking the wheat beforehand is a good tip.  By the way, I obtained a finer flour with 400 grams wheat berries in the blender than 100 g wheat berries, when milling just what was needed for a single bake.  It seemed that the smaller quantities bounced around more, so one workaround I considered was milling more than needed at once and freezing the extra flour to keep it fresh.

I bought my hard white wheat berries from Palouse Brand on Amazon.  Since getting them, I've been trying this formula with sprouted hard white and replacing various proportions of all purpose flour with fresh blender-milled hard white wheat.  I haven't had any more hard red wheat on hand to do an exact repeat of the sprouted wheat, oats, and APF formula as posted.  I do think I'll be able to lower the sweetener percentages with the white whole wheat.

Thanks for the recommendation--The Approachable Loaf is definitely on my To-Do list.

Next time I'll try to be more specific with formulas and processes.  That table was just the total dough section of the spreadsheet that I use.  Here are more details of how the dough comes together, scaled for two 1 kg loaves.  I hope they're readable and more clear. 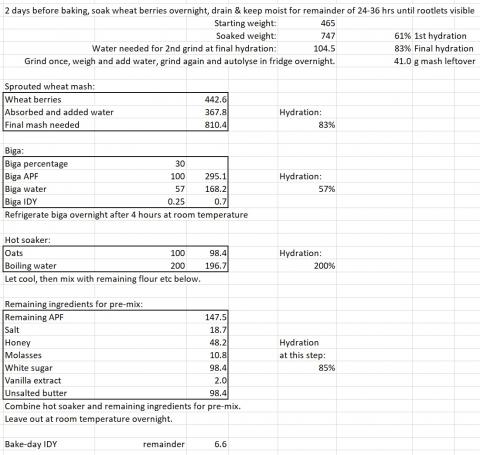 Here's the way I have found to handle my...
Converting Whole Wheat Starter to Bread Flour
Tartine Bread vs Flour, Water, Salt, Yeast
My oven's giving me trouble..will shut down...
Link to Science of Sourdough webinar from...
END_OF_DOCUMENT_TOKEN_TO_BE_REPLACED